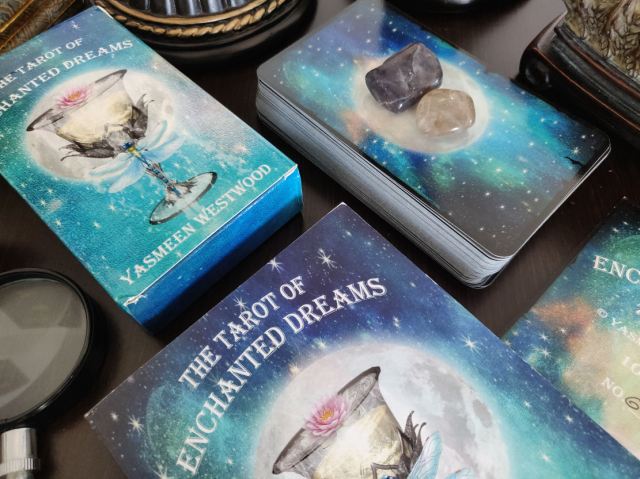 The Tarot of Enchanted Dreams by Yasmeen Westwood is a digital photography-collage tarot deck that transports the would-be enchantress into a fairytale fantasy. The color palette of blues, purples, pinks, and silver sets a mystical tone. If you were that little girl or boy who used to dream of being a princess in a faraway magical land of angels, fairies, and unicorns, then this is absolutely the deck for you. 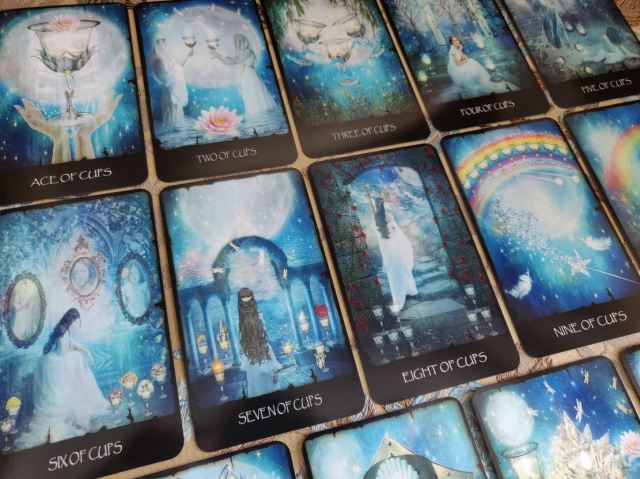 At the craft of digital photo collage art, Westwood is talented. The layering is seamless, color tones adjusted to be perfectly complimentary, and the black borders very much work to balance out the artwork. The cardstock feels like industry standard, maybe somewhere between 300 and 310 gsm, not entirely sure. It’s also shiny, with a very glossy sheen. 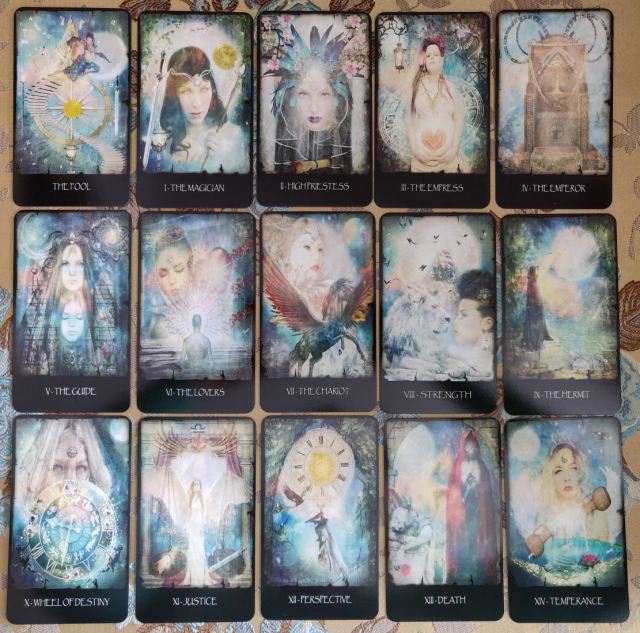 I’m reminded of Baron-Reid’s The Good Tarot here, with nods to maybe Patrica Cori’s Starseed Tarot. However, I think Enchanted Dreams is better than those decks. So if you love The Good Tarot, then take a closer look here. I love the pegasus in The Chariot, the few nods to astrology, and the blurred evocative backgrounds. There’s a little too much black margin space along the bottom edges of the cards, below the titles, but that looks to be a production error. 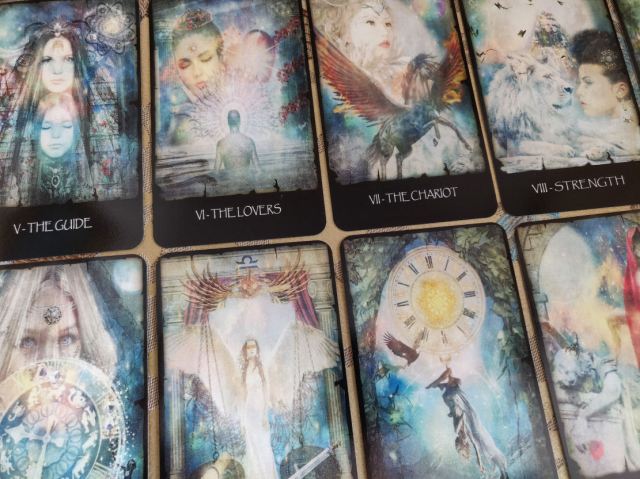 Even though I wouldn’t ordinarily go for keywords on a working tarot deck, I actually think Enchanted Dreams would be served well with a second caption line below the titles that features keywords or an affirmation, something that would transform this deck into an oracle deck as well as tarot, and to service tarot beginners. In fact, finding a way to reword the affirmations in the guidebook (more about that later) into a short phrase to place on each card would really add value to this deck and open up the appeal to a more mainstream audience. 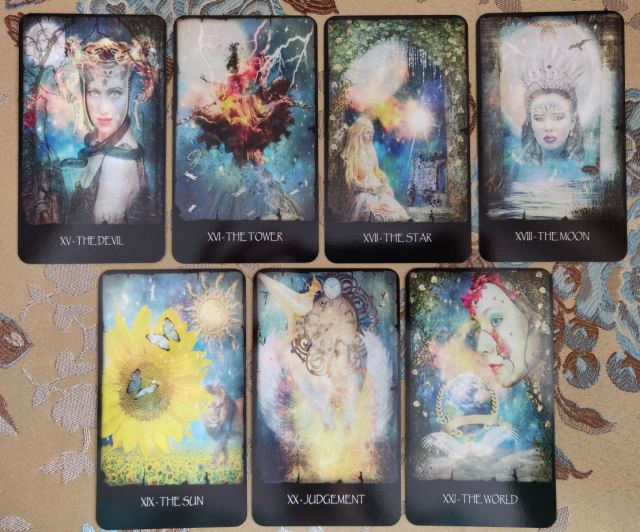 The artwork here has a wider general-audience appeal already, which is why I thought of the keywords or to augment the cards to make them more operable as an oracle deck so that conceivably, someone who doesn’t know tarot could still do divinatory readings with Enchanted Dreams. Personally, given the large market segment Westwood’s deck can capture, I would go with the keywords or oracle captions. 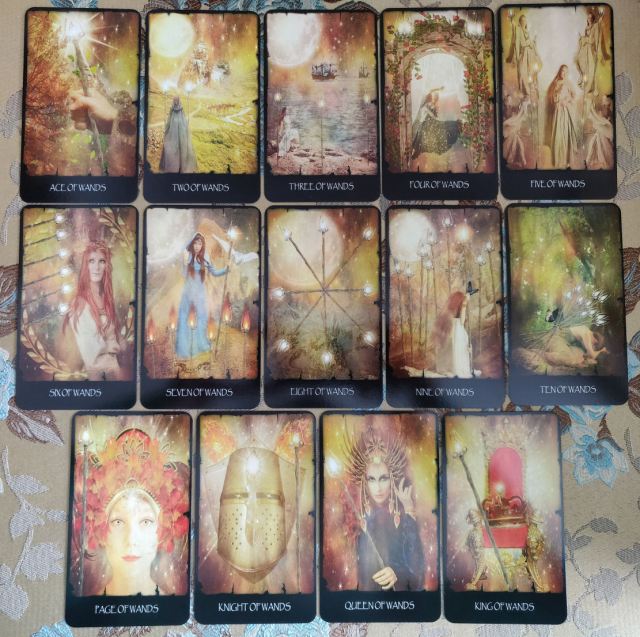 I love the color coding in the suits, where you have a red-gold-amber palette in the suit of Wands, for Fire. The flames on all the wands is also a nice touch. So call me slow, but I admit that it isn’t until here, at the Suit of Wands, that I first noticed there are no male figures depicted on this deck. If you’re going for a fantasy-sisters-sorority, ultra-femme tarot deck, then you’re going to appreciate what Westwood has done here. In cards like The Emperor, the Knight, and the King cards, she has left out any depictions of human men. I think that choice had to have been intentional, and so I am intrigued.  The detailing is what I appreciate most about this deck, like the gold laurel wreath encircling the outer edges and extending off-frame in the Six of Wands or the sprouting of green leaves on the Ace of Wands. 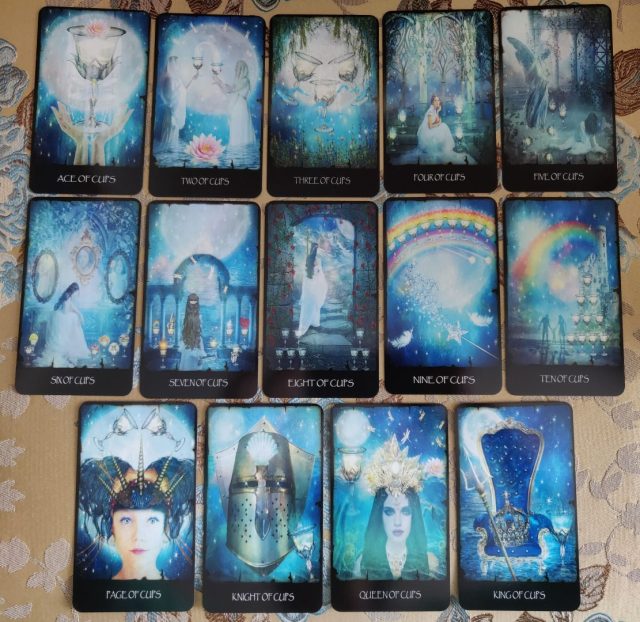 The particular tones of blue here in the suit of Cups are just exquisite. I love the lapis lazuli energy here. I also love the magical surrealism of Westwood’s point of view. Here is an artist who sees enchantment, mystique, and the divine feminine in every frame of the world she occupies. There is an innocence to the artist’s voice here. Even the particular wand chosen in the Nine of Cups has a childlike innocence to it. 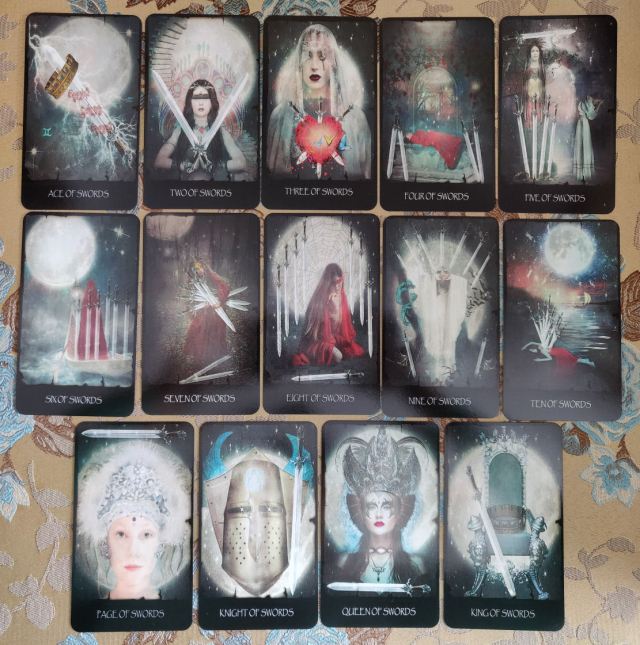 The bold touches of crimson in the suit of Swords is perfection. I love that she went with an ice queen vibe for the Page of Swords and even the Queen of Swords. There are a few digital accents in the collage work that I don’t love, however. The cartoonish butterflies near the heart in the Three of Swords, for instance, or the coiled snake in the Nine of Swords. I’m not averse to a coiled snake in a tarot Nine of Swords, but I think the turquoise coloring of the scales throws the overall image a bit off balance.

In terms of tarot and symbolism, the empty throne on all the King cards doesn’t work well for me. The crown on the seat of the throne conveys to me abandonment. If all the courts were rendered in such a way that did not feature humans, so there was consistency, then I think it’d bother me less. But the empty throne is just so prominent, it’s hard to ignore.

Now, if as a feminist artist a statement is being made here with the intentional empty thrones for the King cards, then I think that would be really interesting. There’s certainly a girls-only club vibe to Enchanted Dreams and a girlish nostalgia with the butterflies featured in all four suits. 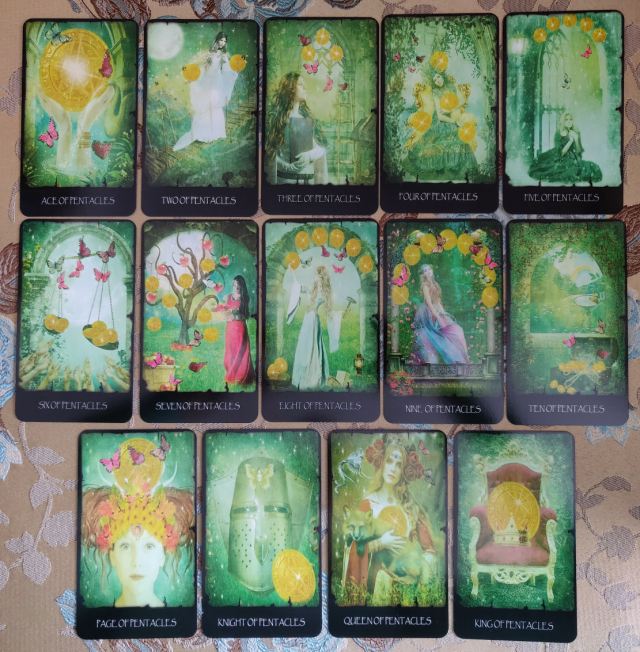 The emerald green here is just lovely. That Queen of Pentacles is just an overall beautiful work of art. What is most apparent about the theme in Enchanted Dreams is a focus on the feminine beauty ideal. All the women are pale, with long, tousled locks of hair, flowy gowns, standing in elegant poses. 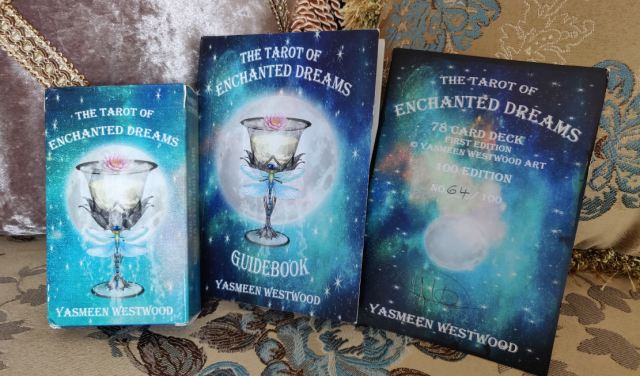 So I’m going to make a quick mention of the graphic design here for the packaging. Again, I love the lapis lazuli tones and the imagery chosen for the packaging express the deck’s overall themes perfectly.

The choice in font type is what got me a bit. All card captions and the font type in the companion guidebook are set in Papyrus and Algerian. I don’t think I’ve seen a professionally produced work set in Algerian font since the 1990s. And of all fonts to use, I think Papyrus and Comic Sans are the two font types– even if unfairly– that have become the butt of every graphic design joke. 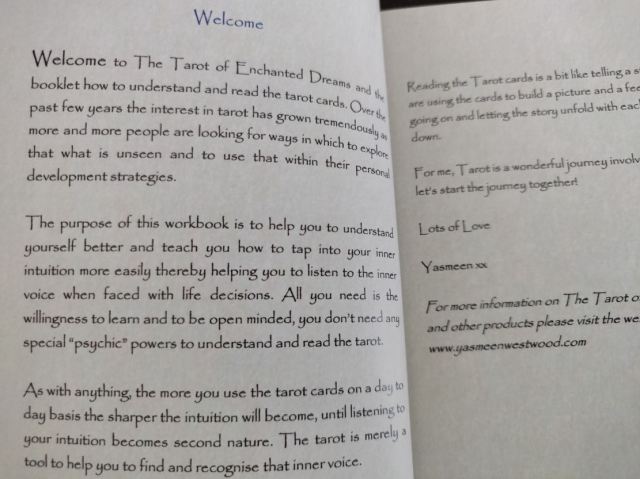 I like the guidebook that comes with the deck. It outfits the set for beginner level readers and does a pretty good job going through the card meanings. 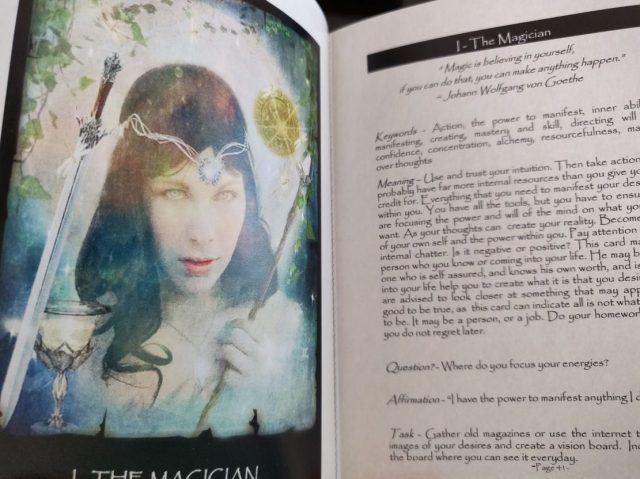 It’s a full-color guidebook. You’ll see that it looks like the font type is all in Papyrus. Getting a professional graphic designer to do the layout of the guidebook might not have been a bad idea here. The content is great. I love the separated sections for keywords, the card meaning, question prompts, affirmation, and some empowering assignments to work through if the card comes up in a reading. I also love the quotes atop each entry. 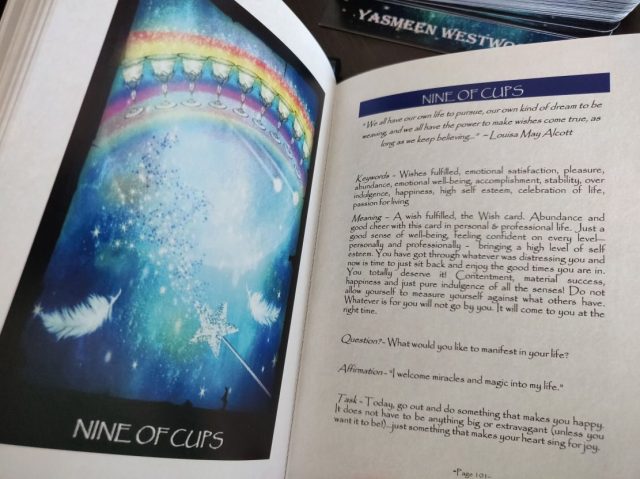 It’s a very well done guidebook, which is why I think the otherwise minor detail of too-small-font, odd choice of spacing, and font type takes so much away. 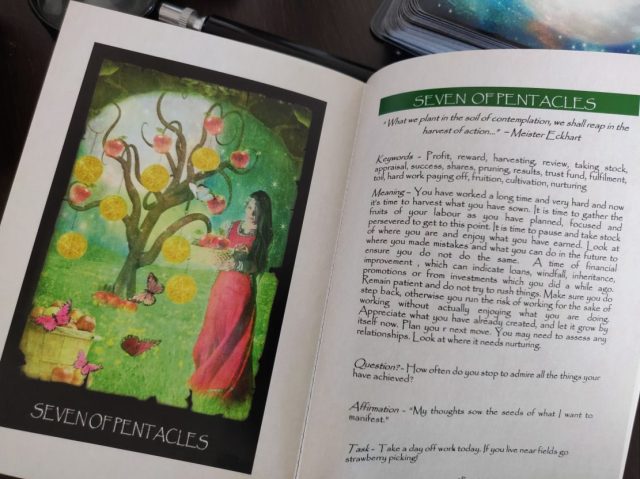 Nonetheless, because of the quality of the companion guidebook and the gentleness of the artwork, Tarot of Enchanted Dreams would be a wonderful beginner’s tarot deck for a young girl or even for a grown-up looking to do inner child work by revisiting the young girl she once was. Delightful, expressive of a delicate feminine grace, and charming, Tarot of Enchanted Dreams is like leaves of a fairytale book turned into a deck of tarot cards. 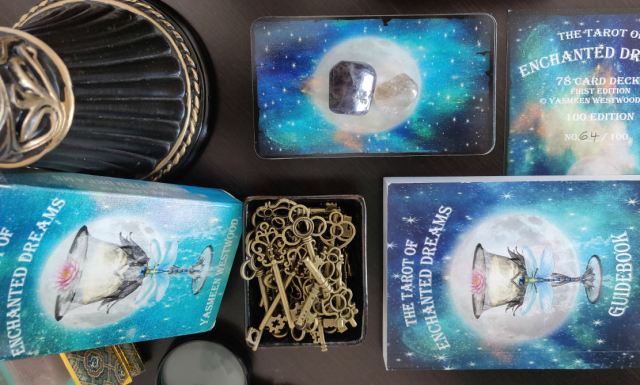 FTC Disclosure: In accordance with Title 16 of the U.S. Code of Federal Regulations Part 255, “Guides Concerning Use of Endorsements and Testimonials in Advertising,” I received Tarot of Enchanted Dreams from the deck creator for prospective review. Everything I’ve said here is sincere and accurately reflects my opinion of the deck and companion guidebook.