The Tao of Craft 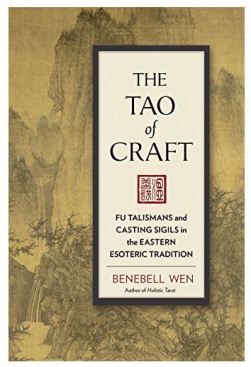 The Tao of Craft is about exploring the rich historic and cultural context of Chinese Taoist-based talisman crafting. May our histories teach us how to blend Old World magic into everyday modern life.

The Tao of Craft: Fu Talismans and Casting Sigils in the Eastern Esoteric Tradition

BERKELEY, California, September 27, 2016— Explore the rich history of Taoist ceremonial magicians and witchcraft as it dates back to the Neolithic shamans of China. Under the reign of the Yellow Emperor, the mythic imperial historian Cangjie was said to have invented writing around 2650 BC, inspired by the footprints of birds. Upon the discovery of writing, demons howled in fear, because through writing, humans could now connect with Heaven and send prayers to the Divine, wielding power over the netherworld.

Fast forward to contemporary times, when those same writings of Neolithic shamans can be revived and used for the spiritual benefit of people today. Learn about the art of crafting Fu talismans for personal empowerment, self-help, and spiritual connections. Supplement your pursuit of aspirations with divinely-invoked metaphysical forces.

Through writing, or the earliest form of Fu talismans, prehistoric shamans, then alchemists of the Qin Dynasty, and later the priests and priestesses of the Jin developed a magical art of spell-crafting through sigils that facilitated communion between the physical world and the metaphysical. The Tao of Craft covers the development of Fu talismans as it was practiced among the varied Taoist lineages documented in history. It then reveals how a modern-day practitioner can render such talismans for personal empowerment.

Fu talismans are a form of metaphysical science that can be practiced outside of or even in conjunction with any religious faith or spiritual path because essentially, the Fu is a form of prayer. Pagans and practitioners of mystery traditions will find The Tao of Craft to be a fascinating read. Benebell Wen, author of Holistic Tarot and the recipient of four book awards is a metaphysician who is also a corporate lawyer practicing in California and New York. She is of Taiwanese descent and currently lives in Northern California.

For the first time in English, Benebell Wen reveals the rich history and theoretical principles underlying the ancient practice of crafting Fu talismans, or magical sigils, in the Chinese Taoist tradition and gives detailed instructions for modern practitioners who would like to craft their own Fu. Fu talismans are ideograms and writings typically rendered on paper and empowered by means of invocations, ritual, and transferences of energy, or Qi. Talismans can be used for many purposes, such as strengthening or weakening personality characteristics, finding love, earning more money, or easing emotional tensions in the home. The Tao of Craft shows how metaphysical energy can be harnessed to amplify, strengthen, weaken, dispel, or block other metaphysical energy and to rectify perceived imbalances in the material plane. Supported by an abundance of detailed charts and images, this book serves as a step-by-step handbook that gives readers the knowledge and confidence to craft their own Fu talismans for personal empowerment.

Wen, author of Holistic Tarot, delves into historic and cultural contexts of the Fu, from the neolithic period of Chinese history to contemporary practices of esoteric Taoism. Providing a solid foundation in the principles of Eastern spellcrafting, she highlights the blending of Taoist metaphysical practices with Western approaches to magic by pointing out eclectic, integrating, and harmonizing facets from other cultures and religions.

Historically, Fu talismans were used by medieval Chinese for alleviating illness; averting misfortune, magical attacks, and curses; defending against assaults; and avoiding poverty. This book shows western practitioners that the skill and knowledge to develop an interactive relationship with spirit realms are still available to them today, and serves as a practical handbook for accumulating Qi energy from sources in the environment and channeling it in concentrated form into their own Fu talismans.