A while back I shared zip file downloads of the above deck here. I called it the Petit Etteilla, because that’s what it was called on the British Museum page that I got the images from. And then much smarter cartomancy community members pointed out that it’s actually a deck called the Livre du Destin, or Book of Fate.

My physical copy of the Book of Fate printed via makeplayingcards.com arrived and I thought it’d be fun to update you on how I read with this 33-card deck (supposed to be 32-card but I added that 33rd “Etteilla querent” card back when I thought it was a Petit Etteilla deck…oops).

I made my own English version of the deck but I didn’t share it publicly because I took some sweeping liberties with the “translations,” if one can even call it that. =)

END_OF_DOCUMENT_TOKEN_TO_BE_REPLACED 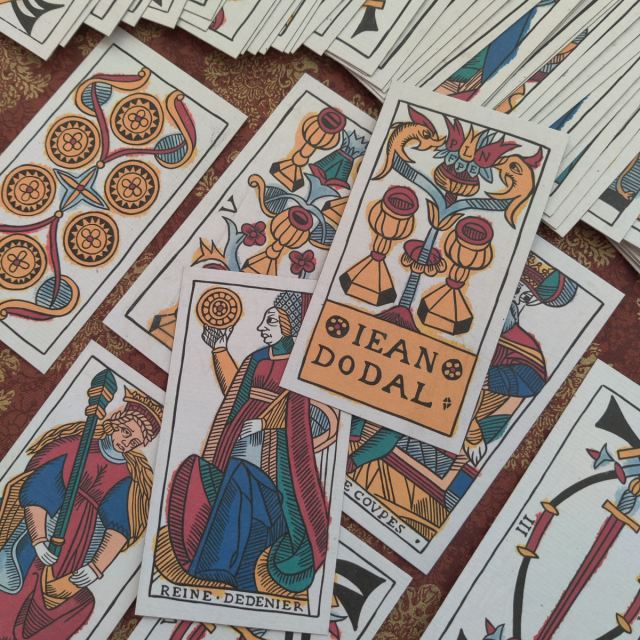 This masterpiece reproduction of the Jean Dodal Tarot by Justin Michael and Shell David (of East Tarot) is everything to me right now. It’s a fixture on the corner of my personal reading desk and when I’m catching up with old friends via zoom video calls, I’ll reach for this particular deck, sling some cards while we virtual-klink wine glasses, and read about Life.

I wish I could tell you that they’re selling these and you can buy one for yourself, but I’m not sure. You’ll need to reach out to either Justin Michael or Shell David directly to find out. Whatever the cost, having just one of such decks is worth your investment. 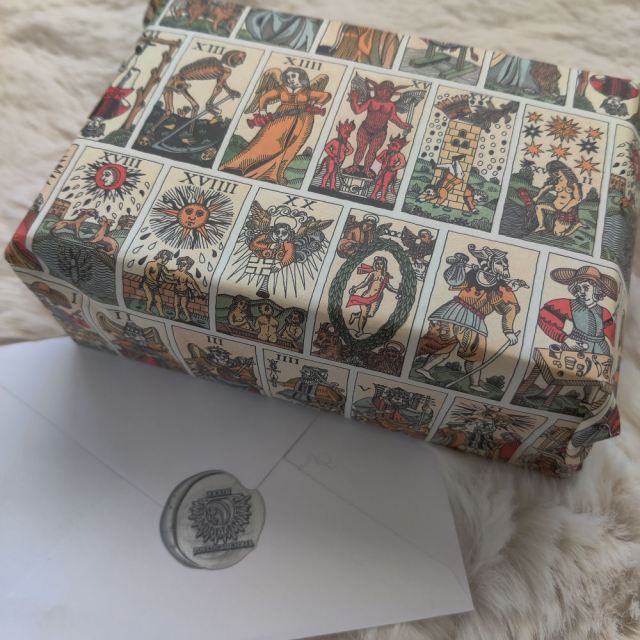 It becomes that prized tool. You’re not paying for just another tarot deck for your collection. Something like this is special. It’s the artisan craftsmanship and the personal touch that you’re investing in, which I truly believe is converted into energy and gets infused throughout the deck.

Dating back to around 1701, the Jean Dodal deck, one of the early iterations of the Tarot de Marseille tradition of tarots, were printed from woodcut engravings and hand-colored by stencil, produced primarily for export. Shell David’s restoration project is top notch, and Justin Michael’s printing and production– just, wow.

END_OF_DOCUMENT_TOKEN_TO_BE_REPLACED

I previously posted my first complete drafts of the first seven Major Arcana cards in my reinterpretation of the Etteilla Tarot, here.

Instead of continuing on to the second septenary of Majors, in order, I realized that practically speaking, I had better try my hand on some of the pips early on, because the last thing I want to happen is to finish the artistic labor for all the Majors then start on the pips, only to realize I hated the direction I was going in and having to abandon the project altogether, after all that work had already been done.

So I thought, okay, let me see if I can even come up with a good approach to the pip cards first, before committing to this deck project. 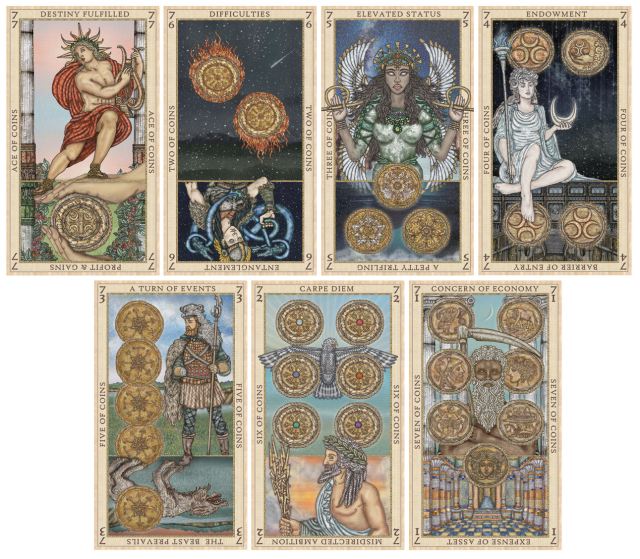 This blog post will showcase the first drafts of the seven Coins cards corresponding with the Sacred Seven (in the order of Sun, Mercury, Venus, Moon, Mars, Jupiter, and Saturn).

END_OF_DOCUMENT_TOKEN_TO_BE_REPLACED

It’s not as easy to find good foundation primers on the Marseille system of tarot, so I’m pleased to share Reading and Understanding the Marseille Tarot by Anna Maria Morsucci and Antonella Aloi first published in 2018 by Lo Scarabeo and distributed by Llewellyn.

Morsucci is an Italian writer, former journalist, spiritual and life coach, who has organized numerous astrology and tarot conferences throughout Italy. Aloi is a psychologist, counselor, and director at the Italian Humanistic Counseling Center, with a background in communication sciences.

This is a comprehensive beginner’s guide to the Marseille Tarot that begins by defining what the tarot is: a deck of 78 cards grouped into 22 Major Arcana numbered 1 to 21 with an unnumbered or designated 0 Fool card, placed either at the beginning or end of the Major Arcana sequence, plus 56 Minor Arcana cards subdivided further into four suits– Wands, Swords, Chalices, and Pentacles.

END_OF_DOCUMENT_TOKEN_TO_BE_REPLACED

I had the incredible opportunity of meeting Dr. Yolanda Robinson in London a few years back, where she gifted me with a copy of Studies on Mystical Tarot: The Court Cards, published in 2013.

Robinson is a professor of transformational psychology and a member of BOTA, the Builders of the Adytum, a western mystery school tradition dedicated to the study of Qabalah and the Tarot. Studies on Mystical Tarot explores the tarot courts through a Rosicrucian lens, contextualizing the courts through Hermetic Qabalah and modes of inner alchemy.

This Sightsee the Tarot video installment will guide you through two self-reflection meditative exercises with the court cards in your favorite tarot deck. The first will focus on the four Kings to reaffirm your personal power and the second will be working with the Page of Pentacles.

END_OF_DOCUMENT_TOKEN_TO_BE_REPLACED 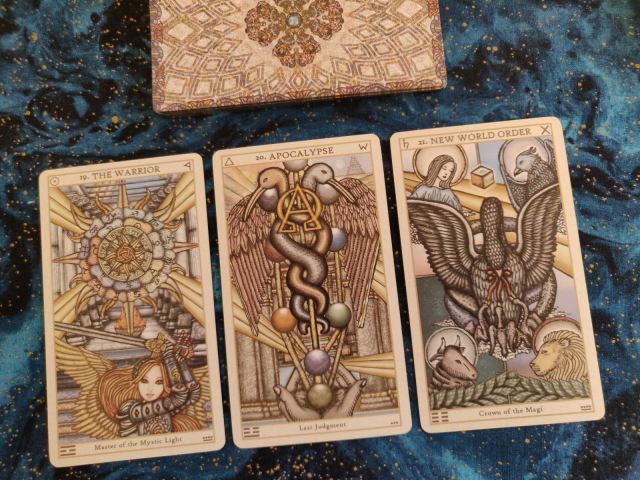 I’m tickled by the coincidence of 2021 being the year the Revelation and final edition of the Spirit Keeper’s Tarot was released and it also being my Key 20: Judgement year. Traditionally this card was named Last Judgment and depicts prophetic scenes from the Book of Revelation.

Major life shifts happened to me in 2021. What feels universally true about Judgement moments is that the past flashes before your eyes in an instant. Meanwhile the present is happening in slow motion, and your sense of the future is exciting yet uncertain. If Tower events are when you feel like the world you had built is crumbling down around you, then Judgement events are when you feel like you’re hydroplaning.

END_OF_DOCUMENT_TOKEN_TO_BE_REPLACED

Ancestral Tarot (Red Wheel Weiser, 2021) by Nancy Hendrickson, a genealogist and tarot master, is an incredible journey into self-discovery through ancestor work. This Sightsee the Tarot video is a guided meditation and three-card reading from Ancestral Tarot— how to commune with your Ancient Ones. You’ll find this spread in Chapter 5, Ancestors of Blood.

END_OF_DOCUMENT_TOKEN_TO_BE_REPLACED

For each year of your life, you have a card from the Major Arcana called the Tarot Year Card, which represents the tests and lessons you’ll experience in any given year. Your Tarot Year Card indicates the kind of archetypal energies that are constellated in that year, suggesting personal qualities you can work with.

In Archetypal Tarot (Weiser, 2021), Mary K. Greer connects astrology and numerology to the tarot to create an in-depth personality profile that can be used for self-realization and personal harmony.

This video workshop will explore Chapter 14 from Greer’s text. We’ll reflect on your Tarot Year Card from 2021 and write out forecasts for the year to come in 2022.

END_OF_DOCUMENT_TOKEN_TO_BE_REPLACED

A video I watched inspired me to hit the record button and share these thoughts. But this is no longer a direct VR to that video (and in fact this video might have taken on a more melancholic tone than intended).

Instead of being a direct VR to the video inspiring this sharing, I will be commenting on what my own experiences have been like.

Here are some of my thoughts 7 years in.

This video is unlisted, which means it won’t appear on my YouTube channel or on the public YouTube platform. I will be experimenting with moving away from that platform and posting more unlisted videos here on the personal website.

Evolving from the pen and ink line drawing you see above to the digitally-remastered in-color version of The Priestess was a journey. As 2021 comes to a close and I send out the final shipment of first print run decks of the Revelation Edition, I’d like to share my reflections on this journey.

Fair warning upfront: This is going to be a looooong blog post. I also share some tips, from direct personal experience, to aspiring indie deck creators.

Completing the Revelation Edition is one of the coolest things I’ve ever achieved, because I leveled up so much in terms of my own art. I did something I didn’t even know I was capable of doing.