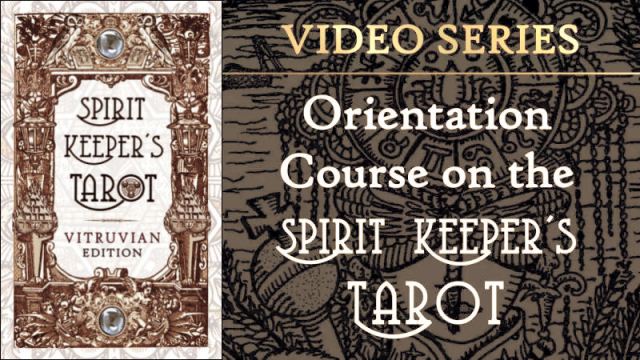 Although the content is keyed to the 2019-released sepia-toned Vitruvian Edition cards, almost all of what’s covered here can also be applied to First Edition decks. So even if you only have the First Edition deck, these videos may still be worth watching.

You can work through the guided Initiate’s Tarot Reading, Seeker’s Reading, or Keeper’s Reading with any of the three editions.

The Video Course II series will give a technical overview of the deck’s architecture and operating system. Then there will be three guided tarot reading sessions, based on the reading methods covered in the Medium White Book.

FOR THE TAROT CARD MEANINGS WITH BENEBELL

The hyperlinked headings in large font will take you to the YouTube video. However, you can also play the video directly from this page.

All videos are closed captioned (CC) for our Deaf and H/H friends, those who speak English as a second language and so might benefit from subtitles, or for those who are in an environment where they aren’t able to play the audio but want to be able to view the video anyway.

At the bottom of the video screen, click the “CC” icon to turn on the closed captioning.

Key 0 and the Significator

SKT is your standard 78-card deck, but you get 80 cards. That’s because there are 3 versions of Key 0, the traditional Fool card. For my deck, I’ve re-purposed Key 0 so that if you read with significators, then Key 0 will always be your significator. You select the version of Key 0 based on your intentions or the nature of your inquiry.

The symbol by symbol explanation of each detail for each card is going to be found in the Book of Maps, which is available only with the premium package order of SKT. Some of the key details are found in the free Medium White Book, however.

This video covers the overall structure of the Majors plus 21 keys in under 20 minutes, so I don’t spend a whole lot of time on card meanings. Instead, the purpose of this video is to alert you to some of my intentions as the artist and designer, and to highlight some of the patterns I hope you’ll spot.

Of all the sections in the deck, the one I changed up the most from your traditional understanding of the tarot is the courts. You mind as well throw out common court card interpretations when using SKT because in this deck, the courts stand in for entirely different concepts. For starters, they almost never indicate actual living people (though they can show up as messages from the other side, or dead people….like ancestors and such….).

The Empyrean Courts are the emissaries and bridge between the unseen spirit realm we can only perceive through our psychic sense and the material, tangible world we perceive through our five physical senses. They occupy that liminal space and appear to us when we need their guidance in understanding both the unseen and seen worlds that influence us. The names for the courts– Archangels, Shields, Shining Ones, and Strongholds– come from angel hierarchy.

Although all texts that accompany the SKT deck order the keys by numbered realms, i.e., all the Aces are grouped together, all the Twos, all the Threes, etc., here in the video series, I’ll discuss the pips grouped by the four suits. First up, the suit of Scepters, or suit of Wands.

Scepters are the active, emitting elemental energy of each numerical Realm. Fire is the composition of the physical plane and astral body. The creativity, will, innovation, and passion of each Realm are embodied in the Scepters. In the lunar paths, this is the new moon. In the solar paths, this is the sun in Aries, Leo, and Sagittarius. Led by the point of Aries, this is the spring equinox of every Realm. The directive to the magus and power attained when pathworking through the Scepters key in any Realm is To Dare. The sacred relic to be unveiled here is the Scepter (or Spear) of Destiny.

Chalices are the passive, receiving elemental energy of each numerical Realm. Water is the composition of the emotional plane and psychic spirit. The concord, empathy, and intuition of each Realm are embodied in the Chalices. In the lunar paths, this is the first quarter waxing moon. In the solar paths, this is the sun in Cancer, Scorpio, and Pisces. Led by the tropic of Cancer, this is the summer solstice. The directive to the magus and power attained when pathworking through the Chalices key in any Realm is To Keep Silent. The sacred relic to be unveiled here is the Holy Grail.

Swords are the active, balancing elemental energy of each numerical Realm. Air is the composition of the intellectual plane and astral spirit. The knowledge, sophistication, force, and tensions of each Realm are embodied in the Swords. In the lunar paths, this is the full moon. In the solar paths, this is the sun in Gemini, Libra, and Aquarius. Led by the point of Libra, this is the autumn equinox. The directive to the magus and power attained when pathworking through the Swords key in any Realm is To Know. The sacred relic to be unveiled here is the Sword of the Spirit.

Orbs are the passive, rejuvenating elemental energy of each numerical Realm. Earth is the composition of the material plane and physical body. The material resource for construction, assembly, and development for each Realm are embodied in the Orbs. In the lunar paths, this is the last quarter waning moon toward the dark moon. In the solar paths, this is the sun in Taurus, Virgo, and Capricorn. Led by the tropic of Capricorn, this is the winter solstice. The directive to the magus and power attained when pathworking through the Orbs key in any Realm is To Do. The sacred relic to be unveiled here is the Bread of Life.

General overview commentary on the Minor Arcana cards in the SKT.

Using The Initiate version of Key 0 as your significator, deep-dive below ordinary consciousness for a divinatory message and revelation from your own inner divine genius. You will be asking: “What do I most need to see right now?” and pulling a single card, follows by self-reflection and journaling.

Using The Seeker version of Key 0 as your significator, invoke the Angel Who Records to reveal to you which area of life you need to focus on at this juncture point of your life path, to ensure that you achieve your Greater Purpose. Then proceed with a guided three-card reading.

Using The Keeper version of Key 0 as your significator, you will be setting the intention for communion with Spirit. You will be opening parts of yourself up to spirit interaction, so prior to that stage of the guided reading, we will begin with a shielding recitation and lay out our cards in such a way as to first form a ward.