This deck was first published back in 2004, so that’s 17 years ago from the date that this review is going up. This post is another one of my 2021-walk-down-memory-lane oldies-but-goodies deck reviews. I fished it out of who knows where from what old box of decks I totally forgot I even owned, and was delighted to rediscover the Celestial Tarot. 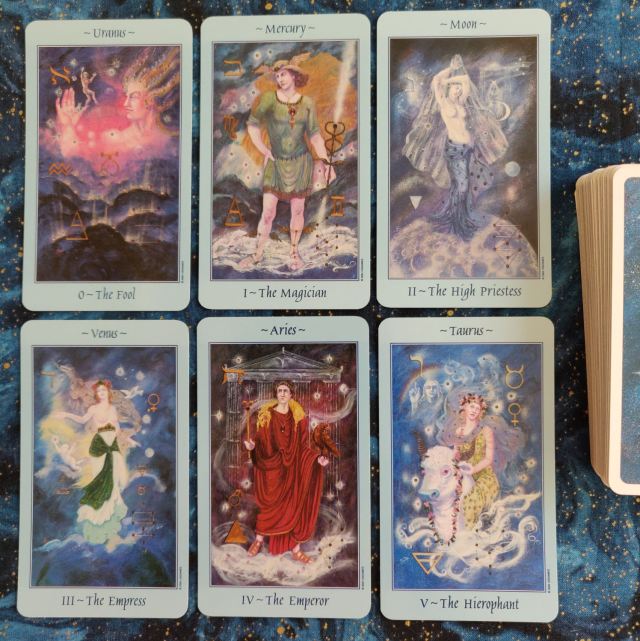 Underpinning the Celestial Tarot is astrology, astronomy, and mythology, with the 78 cards projected up and out onto our night skies to see what constellations, planets, and celestial phenomenon correspond with the tarot keys.

The Major Arcana, which are encoded with the Greater Mysteries, correspond directly with the 12 zodiac signs and the 10 planets of the astrological pantheon representing the daimon governing both the inner and the outer worlds.

In the Majors, the elemental and astrological correspondences follow what I’m familiar with in terms of the dominant Golden Dawn system of attributions, with the three primes now associated with modern planets, i.e., The Fool is Uranus, The Hanged Man is Neptune, and Judgement is Pluto.

There’s a lot of astrology to this deck. The Princesses in the court cards (the Pages) personify the seasons, which I personally then extrapolated out to tie in with the equinoxes and solstices. The Princess of Wands is Summer, Cups is Autumn, Swords is Winter, and Pentacles for Spring.

Then the Prince (Knight) cards are the mutable sign of each season, the Queen is the fixed sign of the season, and the King is the cardinal sign. So, for instance, the King of Cups is Cancer. The King of Swords, corresponding with the cardinal Air sign, is Libra. The Queen of Swords, corresponding with the fixed Air sign, is Aquarius.

And you are never left confused about what each card depicts. The Four of Swords, for instance, is Pisces Australis; the Five of Swords is Pegasus, and you even get a few sentences on the myth of Pegasus. The Six of Swords is Cygnus– omigosh, totally! The Seven of Swords, Lepus. I’m loving what Steventon and Clark have done here! 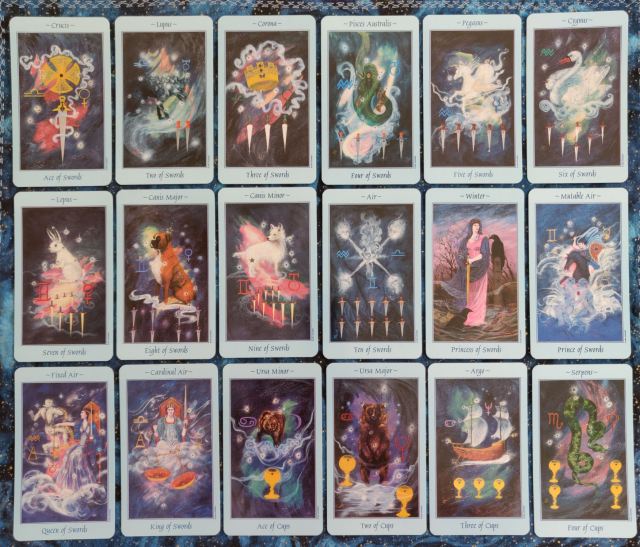 Even with a halfway decent proficiency in astrology and astronomy, this was a difficult deck for me to read with. It requires a pretty in-depth knowledge of Greek and Roman mythology, for starters, as that tended to be the starting point the deck creators used to connect the traditional tarot card meaning to the constellation correspondence.

The compositions also feel more like portraits, and the objects or props you see around each portrait go more toward characterization than to, say, narrative storytelling. These compositions are character-driven, not plot-driven.

Steventon’s paintings are highly ornate and detailed. I might liken it to Stephanie Pui-Mun Law’s Shadowscapes Tarot, though admittedly the style of these two artists are totally different, and draw that comparison on the basis of the highly-detailed, ornate, and muted compositions. Law’s linework is crisp, while Steventon’s is misty. I’m also reminded a bit of Kris Waldherr’s art style in The Goddess Tarot.

I’m really liking the pale blue borders with this deck. The cardstock isn’t as thick as what we’re used to today in terms of indie production quality, but it will withstand the test of time– I’ve had this deck for decades at this point and it’s in great condition. The cards are glossy, which was pretty standard in the early 2000s.

Above you can see how well thought out the astrology to tarot correspondences are. Each Minor Arcana card corresponds with an angular aspect– Aces are conjunctions, for instance; Twos are oppositions, Threes are trines, and so on. For each suit, the little white book gives you the constellation correspondence and the decan ruler.

The LWB (little white booklet) written by Brian Clark is spectacular. I mean this little 48-page black and white stapled booklet is packed, well-organized, and deliciously comprehensive with astrological and astronomical info. Sure, classic to its era, you get just a two-page pithy instructional on the Celtic Cross at the end, but I’m so okay with that, given that the card by card info in here has 10 times the depth that many of the big, colorful deck guidebooks contain today.

Oh hey look! This deck was from back when decks were not only in tuck boxes, but all made in Europe! What a walk down memory lane! =)