The Shadowscapes Tarot is one of Llewellyn’s evergreen decks, meaning it remains a consistent bestseller since its first publication in 2010. And that’s no surprise. Oakland-based artist Stephanie Pui-Mun Law is indisputably one of the most talented illustrators to set her hand on to creating tarot art.

This is one of those decks you want to take a magnifying glass to. With the delicate threadbare lines and inlays of elaborate ornamentation, it would be almost disrespectful to not devote hours of meditative study to the details.

How would I describe the deck art? If Asgard of Old Norse saga and Tianchao, the Celestial Empire of Chinese mythos merged into one kingdom inhabited by factions of magical creatures in which an epic fantasy was set, then you’d get the Shadowscapes Tarot.

In its own words, the Shadowscapes is presented as an eclectic blend of Asian and Celtic fantasy themes. And that is such a cool combo. Off the top of my head, I can’t think of any other tarot deck that brings those two worlds and cultures together.

The LWB gives short-form essential card meanings, but nothing in the way of card descriptions, which is something I personally like to see in an LWB. That said, it’s co-written by Law and Barbara Moore, so with Moore’s hand in the writing, you know the card meanings are reliable.

The cellular level of detailing on this deck is just phenomenal. You know that consciousness before you awaken from a vivid dream, but you are beginning to emerge back into the physical world, and the events from the dream are fading away? That’s what the aesthetics here feels like with the soft lines and blurred washes.

I love the amethyst and steel grey color combination that dominates throughout, with the gentle washes of gold light. By the way, you can click on any of these photographs for an enlarged zoomed-in view of the details.

The suit of Wands features foxes and qilin (a mythical creature of Chinese lore) rendered in a style that’s reminiscent of classical Chinese fine art. These images look like silk scroll paintings. 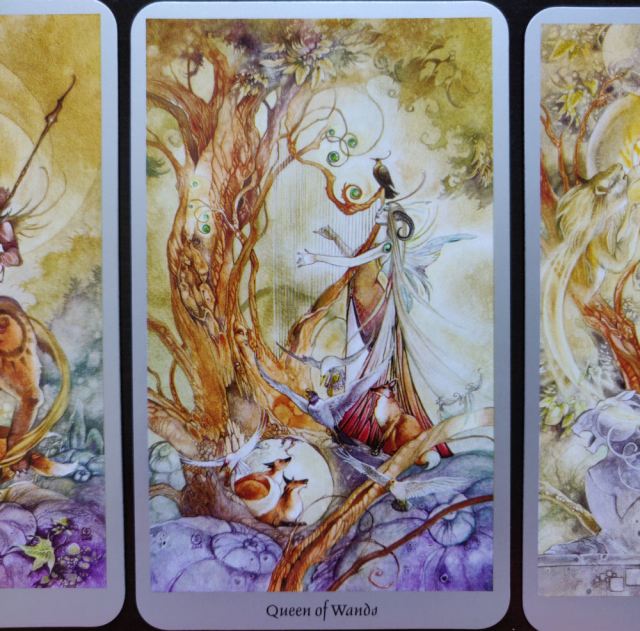 Populated by fairy queens, foxes, and woodland creatures, Shadowscapes is a tarot deck for the dreamer. This Queen of Wands is a good example of the detailing– the lavender spiral shells that make up the ground, and how the compositions are fully-populated works of art. Your eyes can wander from area to area and there are multiple sub-plots going on within the main narrative of the illustration.

Here in the suit of cups, we explore the underwater world of mermaids, koi fish, and sea nymphs. The amethyst darkens into a lapis lazuli blue. Like the gradual darkening and lightening of the sky, there is elemental color symbolism here that designates which suit you’re in. There were stronger gold and red tones in the Wands and here in the Cups you see the rich blues.

As standalone works of art, each piece is indisputably exquisite. Just consider the story unfolding in your mind about the ensnared swan in the Eight of Swords and the hummingbird. I can see the movement of the branches– and are those the skulls of swans that came before on the ground?

The emotions, the plotting, the voice of the artist, the superior level of technical skill– all of it comes together in this masterpiece of a deck. I love that severe swath of red in the Ten of Swords and how, when all the Swords cards are lined up like you see above, it’s a gash of a wound across the landscape. Every aspect of this deck at every layer is just so artfully done.

In the Suit of Pentacles, the color wash blurs into jade and emerald greens. Another artistic detail that’s prominent in this deck that I don’t think I’ve ever noticed before in other decks– weather. In the Shadowscapes, something about it turns my imagination on High, along with clairaudience, and I just feel like I can hear the weather. The winds, the storms, and all the ways that Mother Nature is an animated, fully fleshed out character.

While you won’t get much disagreement from tarot folks that the Shadowscapes is an absolutely breathtakingly beautiful deck, where you do get debate is whether this deck is readable. Can you read tarot with the Shadowscapes?

As a tarot deck for reading purposes, for me personally, it feels like I’m cosplaying, which isn’t a bad thing, and can be exactly what you want on certain occasions, but it is certainly its own thing altogether. It’s like trying to answer love, health, and career questions through Lord of the Rings.

This is a hand-held gallery of high fantasy art that I enjoy taking a magnifying glass to. The ways in which the essence of the tarot card meaning is interpreted are delightful, like that spider weaving a web in the Eight of Pentacles. The Shadowscapes Tarot is one of those decks that will never leave my personal collection because of how much I adore it.