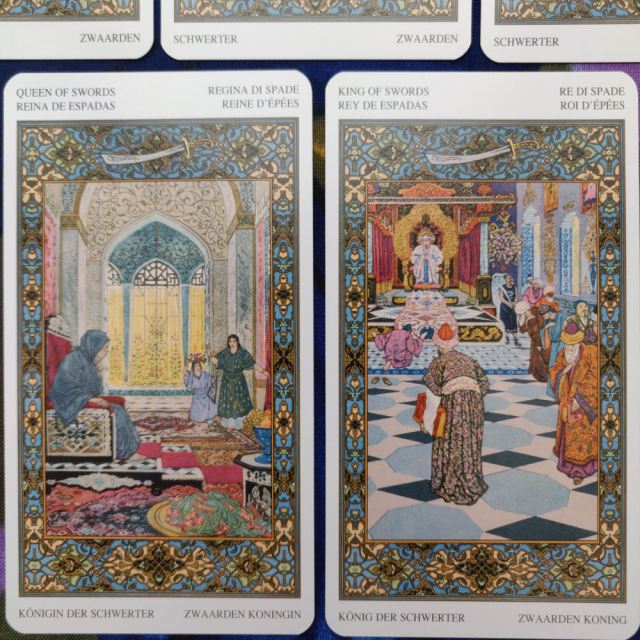 The Tarot of the Thousand and One Nights was published back in 2005 by Lo Scarabeo, with the artwork collection edited by Pietro Alligo. It’s art deck featuring the works of the late 19th and early 20th century French painter Léon Georges Jean-Baptiste Carré, living around the time Waite and Crowley.

Carré moved to Abd-el-Tif, Algeria and concentrated his body of work on Orientalist subjects. (Orientalism is the European and Western study and commentary on Middle Eastern culture.) 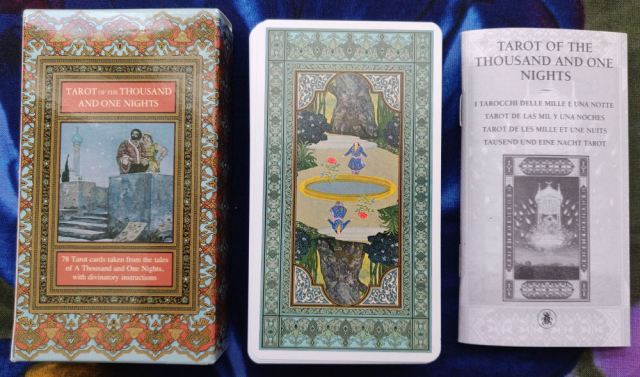 I thought the card back design by Alligo was brilliant. It’s scenic, of a figure gazing into a shallow pool, as if scrying for a divination, with that single rose of mystery, and yet it is reversible and has the ornamental design that anchors you in the world of playing cards. 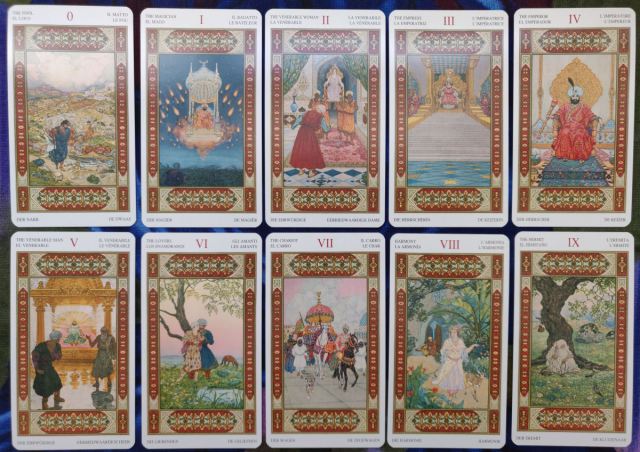 Earlier this year while scrolling through Instagram, I saw Kim Arnold post photographs of this deck, and I was immediately in love. If you’re not familiar with Arnold, she’s a Hay House author, founder of the UK Tarot Conference in London, and founding editor of The Esotoracle. Anyway, of course I had to get the deck for my personal collection. 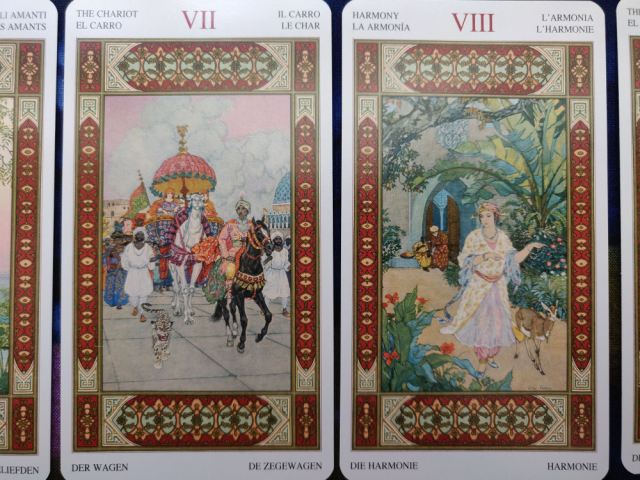 The level of detail, the world-building, Carré’s command of space, texture, and story is just a pleasure to behold. In this deck, the paintings are set into heavily ornamental borders, which I don’t mind. It works with the art’s aesthetics, though the drawback is the highly detailed paintings are even smaller now, and require a magnifying glass for you to fully appreciate. 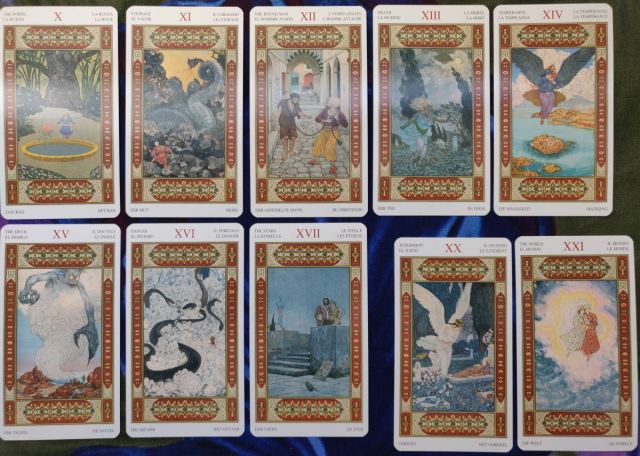 In the above photo I skipped Key 18: The Moon and Key 19: The Sun because I wanted to do a close-up of just those two cards from this deck. You’ll see why. 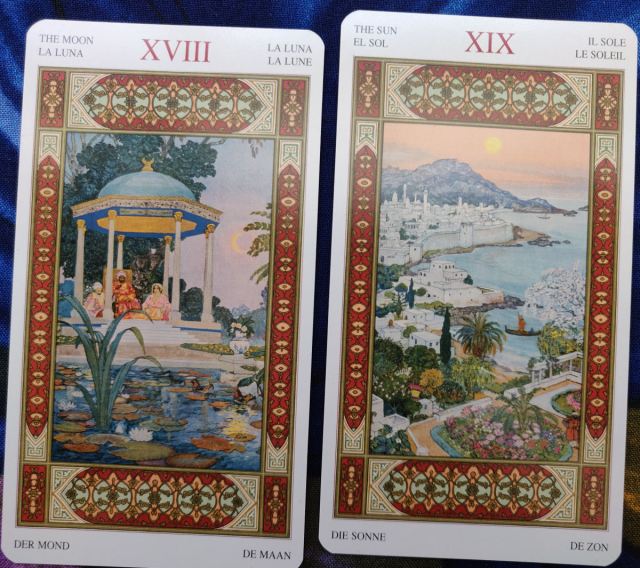 I noted earlier how impressed I am with Carré’s use of space. Consider: that heavy, ornate border around a work of art would normally cause that work to feel claustrophobic, but it doesn’t here because of how open and vast the landscapes feel. In The Moon card on the left, I could just step over that border, wade through the waters, and sit with those figures under the pavilion. I feel like I’ve been transported to another place in that Sun card. 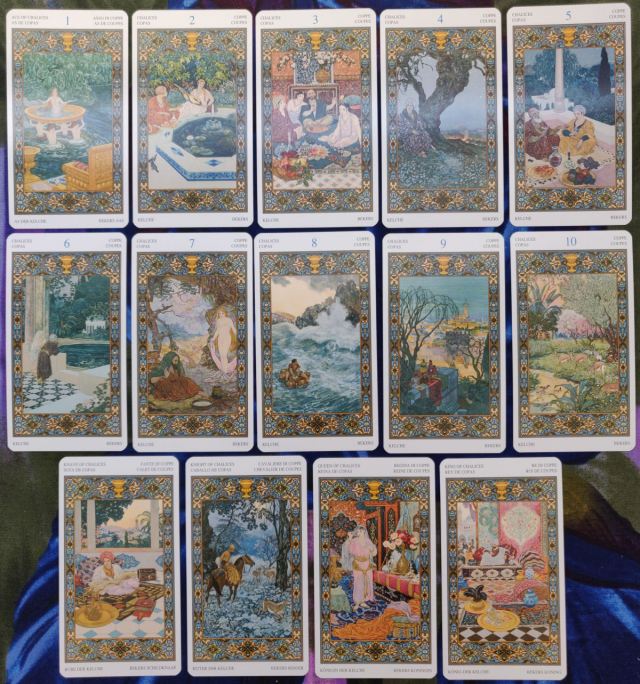 This blog post is just going to be a pictorial walk-through of the deck art, with some cursory commentary. It’s not really going to be a review. 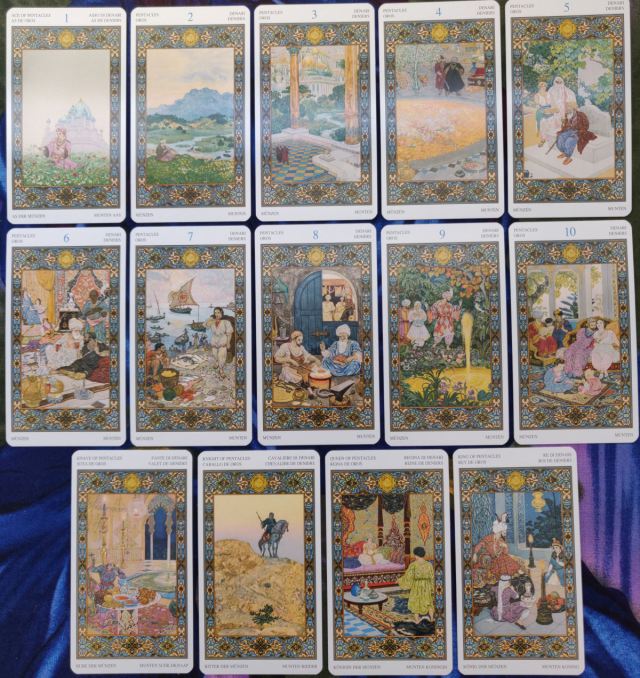 It’s a bit unfair and also unproductive to review it as a tarot deck per se, since its premise was to take the collection of art from a long-dead somewhat-obscure Orientalist painter, and then assign his preexisting works of art into the tarot key titles. Not everything is going to fit, or make sense from a tarot card meanings and iconography perspective, nor does it need to. Because it’s an art deck. 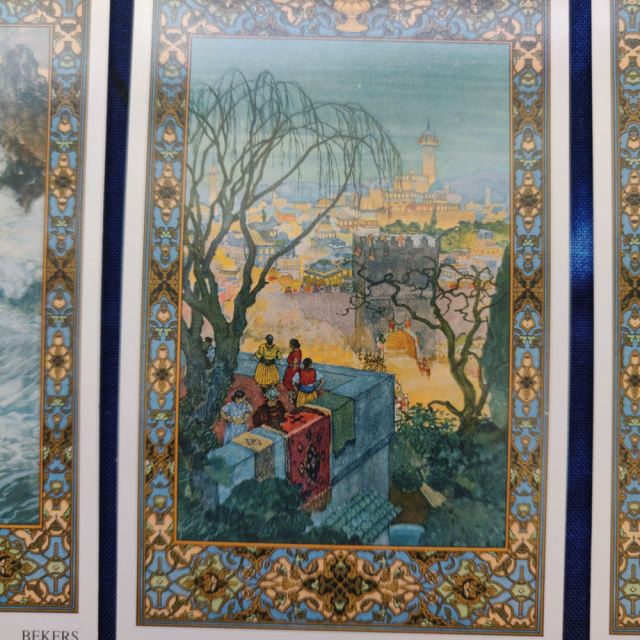 As a deck creator and a self-proclaimed art student at the moment, this is an incredibly useful study deck. Like the above, for instance. Look at how balanced the foreground, the midground, and background are. Carré gives your eyes an easy starting point– that tree–and nudges you to observe the figures on the rooftop. You then continue on to the next tree and now you’re taking in the midground, and then you get a sense of the where and the world you’ve been transported to via the background. The command of space here means this heavily-detailed work doesn’t feel crowded at all. There’s still a lot of earth and vegetation, and yet ample sky. 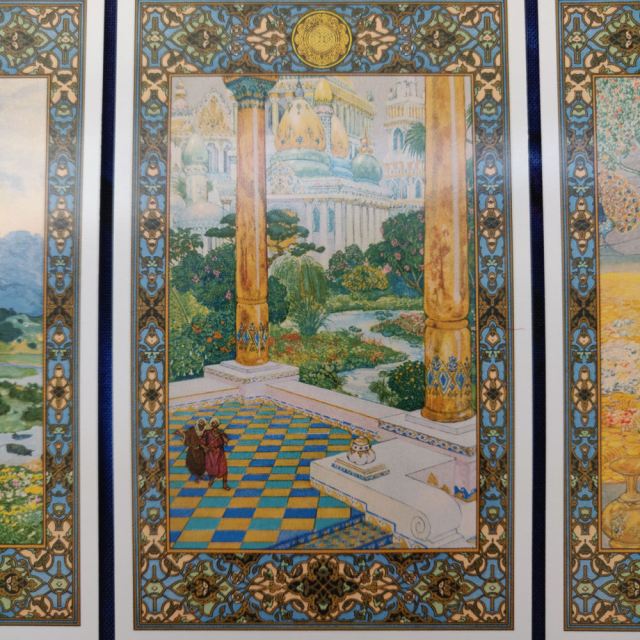 Here’s yet another close-up example of Carré’s incredible command of space. Do I have any idea what that tarot card is, without looking up the title? Nope. (It’s the Three of Pentacles, in case you were curious.) And that’s okay! 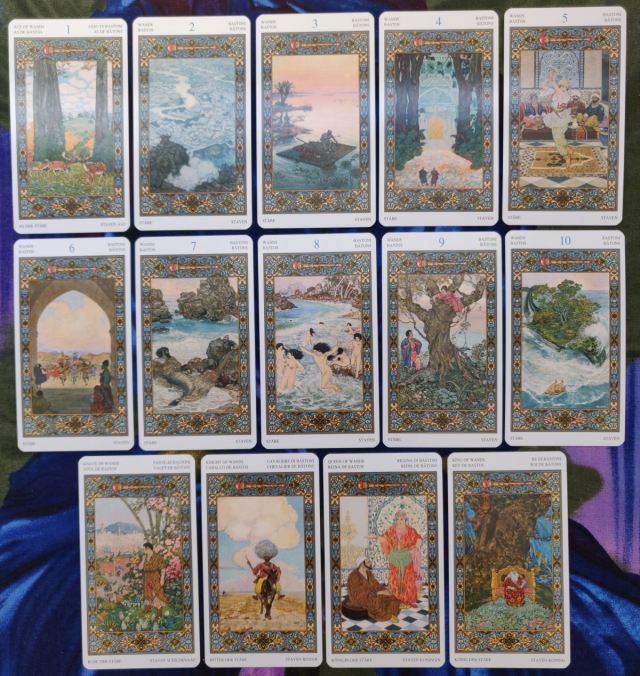 Because I don’t read with this deck, and I didn’t acquire it with any intention of it being a reading deck. I got it because I’m a collector and I wanted this deck for its substantive oeuvre of Carré’s art. His paintings and illustrations are magnificent and not a style that has kept up its popularity in modern times, unfortunately. 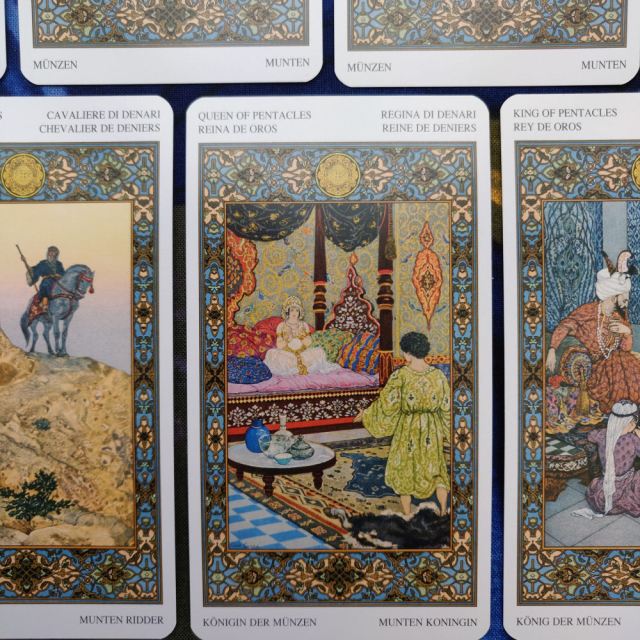 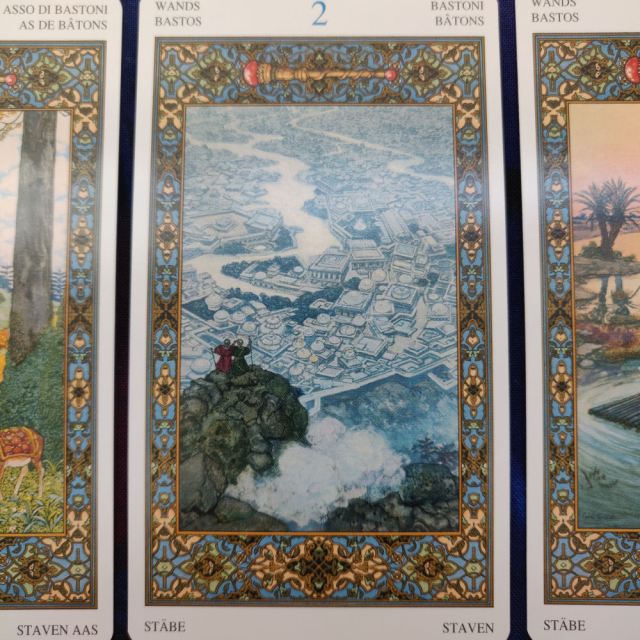 It’s not that I’m afraid of heights, but I do get a teensy bit dizzy when I’m way too high up and looking down. And I get that dizziness looking at the above card. Which is just incredible! What a testament to the artist’s talent! Also, as an illustrator who loves detailed linework, I can absolutely appreciate how much work and study went into drawing the above. 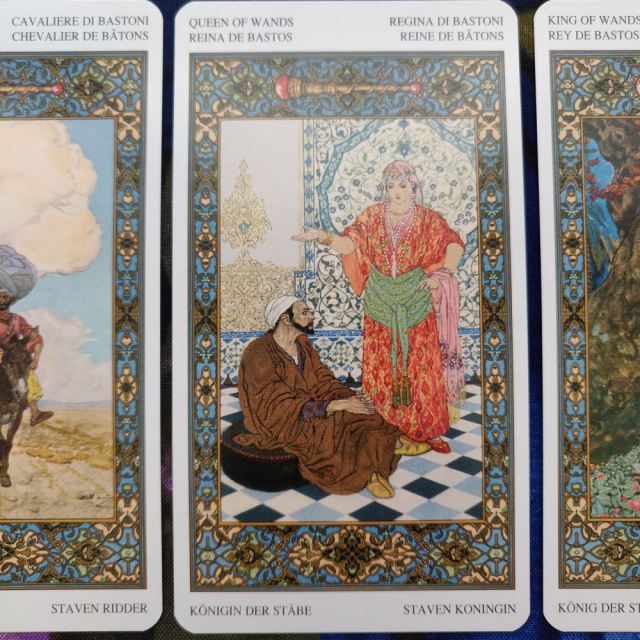 I will say that the human emotion element isn’t nearly as strong in Léon Carré’s art. In many of these works, the human figures feel stiff, more posed than natural, and it’s the detailing on the fabrics, the Islamic style geometric patterns on the walls and the overall scene that captivates you. 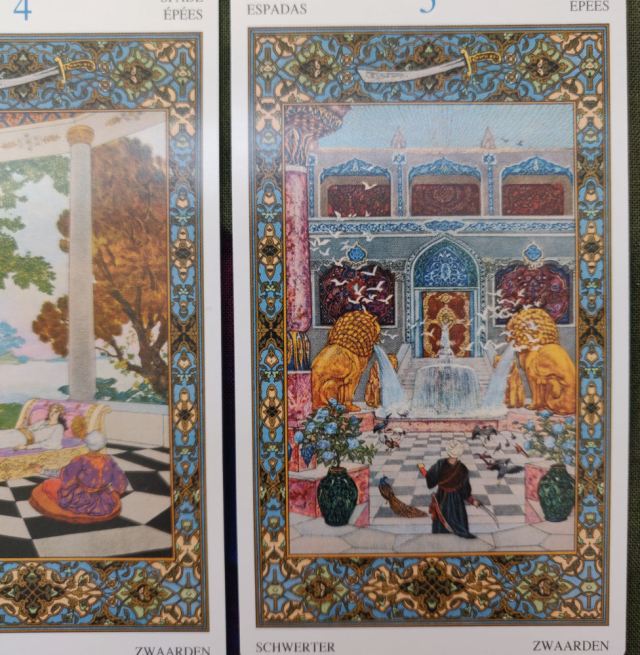 The above is the Five of Swords. Again, I don’t have much in the way of critiquing this as a tarot deck, because the original artist, Léon Carré (1878-1942), didn’t create these paintings with the intention of tarot in mind. [Deck published: 2005.] Like, there’s maybe some connection, right? Lots of birds for the element Air? Air… Swords? =) 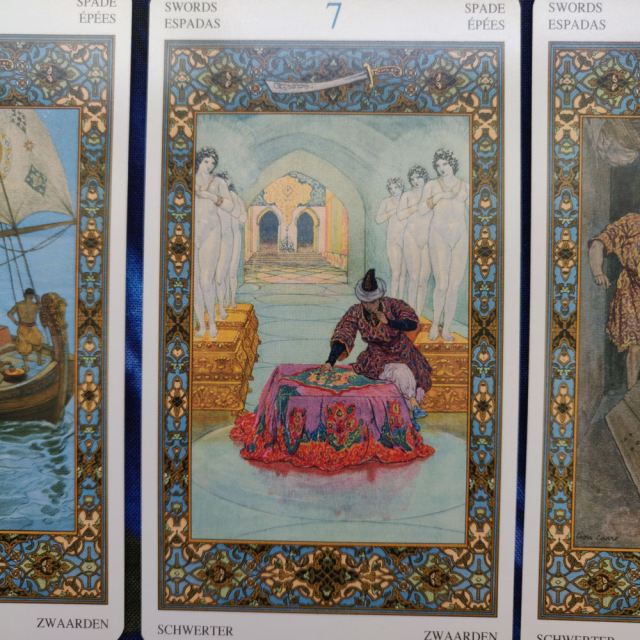 And it’s not like this was a digital collage art deck where someone came in, cut and pasted someone else’s preexisting artwork to make it fit into the tarot. It’s his paintings printed on a deck of playing cards. And I am totally here for that, no gripes. 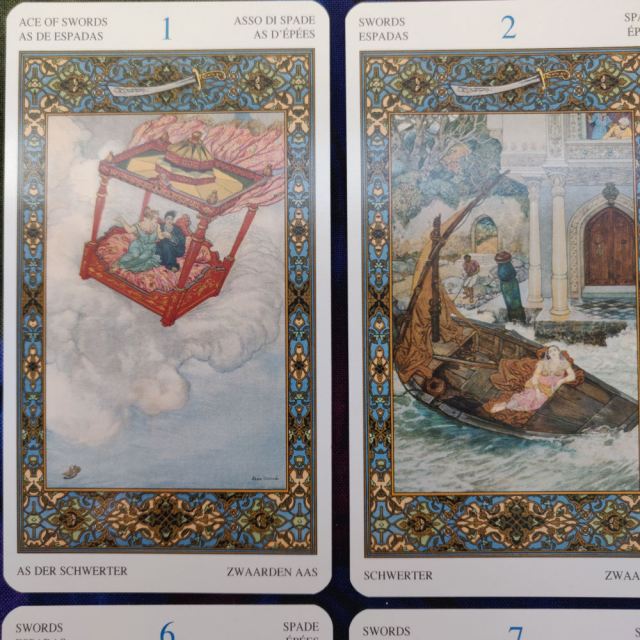 Study these compositions– isn’t it amazing? For the Ace of Swords (above left), the focal point is the flying bed and the two figures, but then your eyes move to the clouds and sea far down below, giving you a sense of setting, and then the story ends with that tiny detail of the ship at the bottom left corner, and the tale ends with a cliffhanger: where is that ship headed? With a vivid imagination and overblown creativity you can certainly make this card work for an Ace of Swords, but so not the point. =)

Same with the art on the right. The woman in the boat, the rushing waters, then the gardener at the docks, and as your eyes continue upward, the two men leaning out the window admiring the woman. 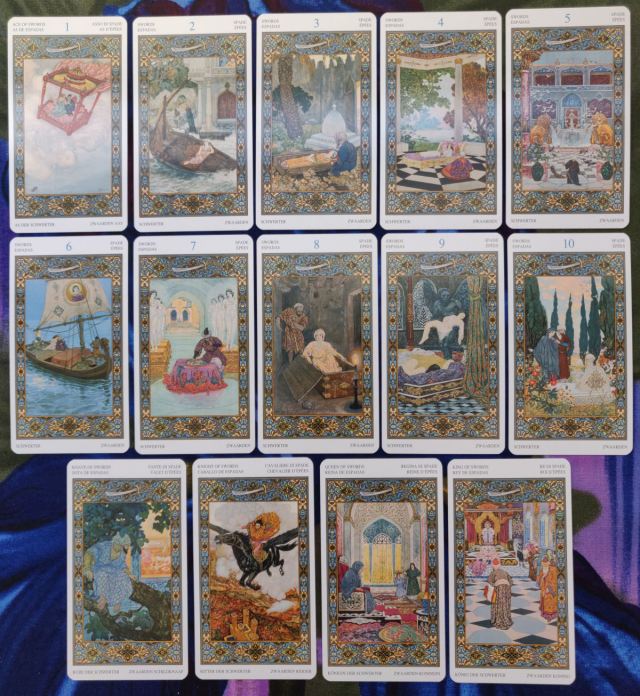 I’m curious how such an art deck lands with the 2020 tarot reader/consumer.

What are your thoughts on a deck such as this?

And consider the art community and what styles of art are popular right now. When was the last time you saw a present day artist do work like Léon Carré?