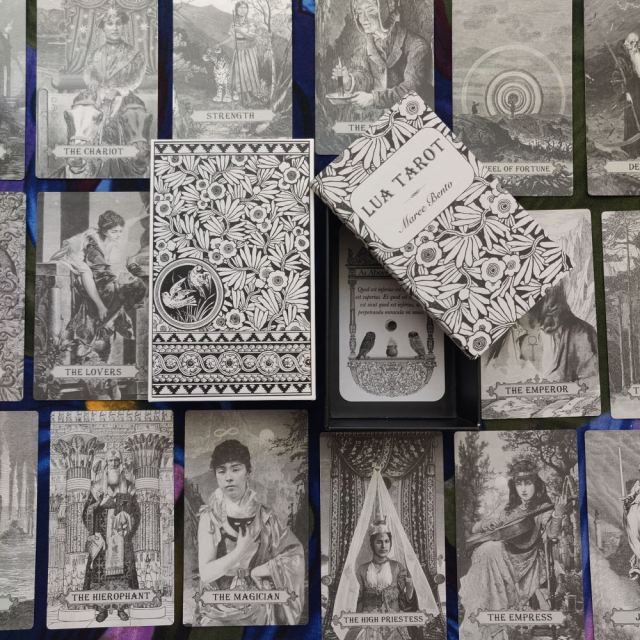 The Lua Tarot created by Maree Bento is a black and white collage deck of 19th century engravings. Lovers of the Victorian Era, you are going to adore these cards. “Lua” means “moon” in Portuguese, which is the perfect name for this deck, given its style and how the grayscale speculative aesthetics induces inner reflection.

Bento is the creator of the Divine Muses Oracle, which I’ve reviewed here. There’s this mystical-alchemical dream quality to her art style, and while Divine Muses was more mystical, Lua Tarot is more alchemical.

From a compositional standpoint, Bento layers the imagery with seamless perfection. There are clear stories going on in the foreground, midground, and background. You get a strong sense of earth and sky in every card image. Bento balances detailing and space in such a way that your eyes are always relaxed.

The packaging and product design is top rate. I love the addition of Medusa for protection in the interior of the lid. The dark and light owls on the title card was a really nice touch. 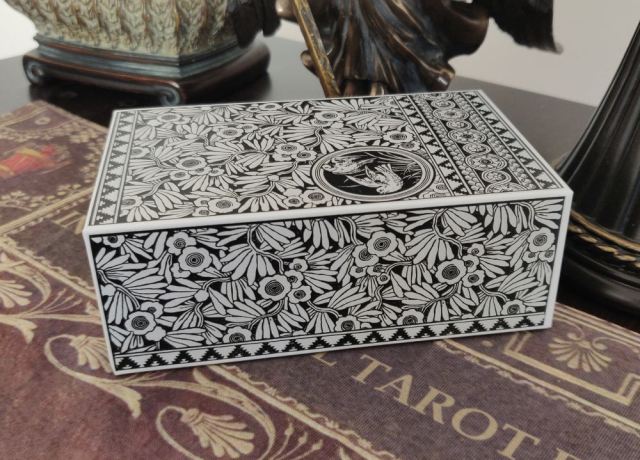 I love the discrete deck box, which would look simply amazing on an altar, especially if you’re a color minimalist. Bento’s aesthetic preferences are very much in line with my own. There’s an understated elegance to all of her artwork that I very much appreciate.

Even while working within the narrow scope of Victorian Era engravings published in the western world, Bento manages a deck that feels inclusive, with a balanced plurality of voices represented.

You can see a conscientious effort to be inclusive with the depictions of people in this deck, but keep in mind that the theme was to use 19th century preexisting art. So these images weren’t drawn in 2020.

In several places (you can click on any of these photographs for a slightly larger viewing), Bento has incorporated astrological glyphs and other tarot symbolism to anchor these illustrations in the tarot. You’ll see strong Hermetic influences in Bento’s perspective, which shines in her design choices.

Above you’ll see two Judgement cards, one titled Judgement, and the other Evolution. In the Judgement version, there’s a stronger Aeon interpretation, focusing on the esoteric, on resurrection, and the spiritual consciousness of Key 20. Evolution, the one depicting a butterfly, is focusing on the transformative properties of Key 20. I’ve been reading with both cards in the deck. =)

I love the centaur and Sagittarius reference for Temperance. In the companion guidebook (a meaty text, no less!), Bento covers the four virtues, with the Hermit card corresponding to Prudence, Justice, Fortitude (Strength), and Temperance. By the way, is that not one of the most dynamic Death cards you’ve seen in a while? Typically the reaper is depicted in a rather passive, stoic stance. Here, I almost feel an implied connection to The Tower. 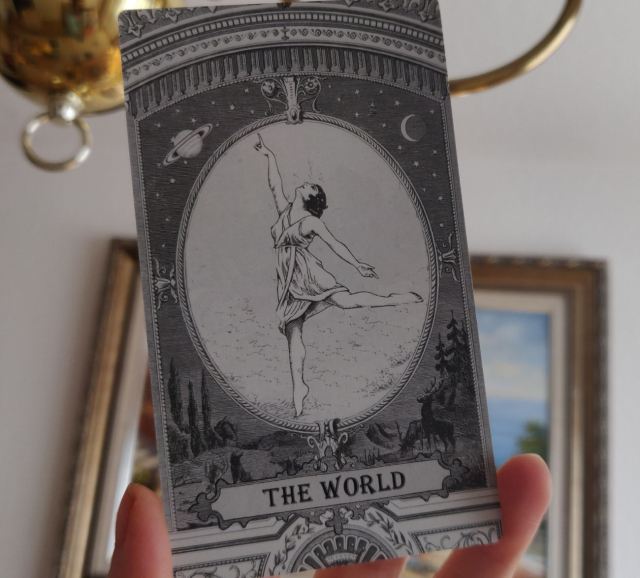 In terms of design decisions, I’m not a huge fan of the font type. It feels a little on the heavy side when being balanced with the card imagery. However, I love that the Majors are left unnumbered, so that the Key 8 / Key 11 issue becomes a non-issue.

The guidebook is written to accommodate the total tarot beginner, offering a surprisingly comprehensive overview of the tarot, with balanced coverage of both psychology-based and mystical perspectives.

Bento managed to pack in a lot of substantive content into this little guidebook. Not only is there great introductory material for the beginner, you also get Life Path or Life Purpose tarot card correspondence info, Myers-Brigg Type Indicator correspondences, and lots more.

The guidebook gives a description for each card, so that you won’t miss any of the incredible details. There are no source citations, however, so you won’t be able to backtrack and figure out the original authorship for each feature in the cards. While deck creators most certainly do not have to include attributions when working from the public domain, in the case of collage decks, it is nice, from a consumer’s standpoint, to see those types of attributions.

The deck reads beautifully, by the way. It does feel like a “left-brain” deck, where your reading of a spread will feel more like a linear path of reasoning than splotches of emotions. (I say that because I find a lot of contemporary, colorful decks to read like splotches of emotions.) Something about the deck’s aesthetics also lends itself remarkably well to those who are more psychology-based readers.

In some of the cards, you’ll get the suit symbol in the corresponding number. For example, the three swords in the Three of Swords. But then in others, the scene itself expresses the essential meaning of the card, such as the Seven of Swords or Eight of Swords.

For this deck, it works, because imagine it– had Bento replicated the sword, say, five times for the Five of Swords, it would throw the composition off balance. Not to mention each and every scene she has created for these cards expresses the energies of the card with such vivid story, that you’ll find these cards really easy to read.

I’m a huge fan of black and white decks. The artist cannot rely on color, and so you need to express values with dark and light contrast. Some artists go bold with their lines, while others, like Bento, are comfortable with the grays. You’ll see that she keeps her lines light, eliciting in you a sense of nostalgia from the “faded photography” aesthetic. She works with low contrast, meaning most of her lines are mid-tone grays, and she actually avoids solid white and solid black.

The Lua Tarot is a great working deck to keep on an altar and use in personal readings. They set a rather mystical tone for a professional reading if and when you pull this deck out for a client.

My favorite way to work with the Lua Tarot is the card-a-day draw. I pull a single card and set it on my work desk. Each card is so detailed in its background setting, sub-plots around the focal point of the Key, and esoteric symbolism that give you access to the cards at many different levels.

I definitely have a thing for black and white tarot decks, and every time I see one pop up on the market, I pay attention. Maree Bento’s Lua Tarot is magnificent. The Neoclassical spirit of the deck with Gothic nods is right up my alley.

If you love black and white decks like I do, then here’s one that’s Romantic, magical, and sprinkled with familiar Hermetic symbolism, yet easily readable. If you don’t yet have a black and white deck in your collection, Bento’s is a great entry point! 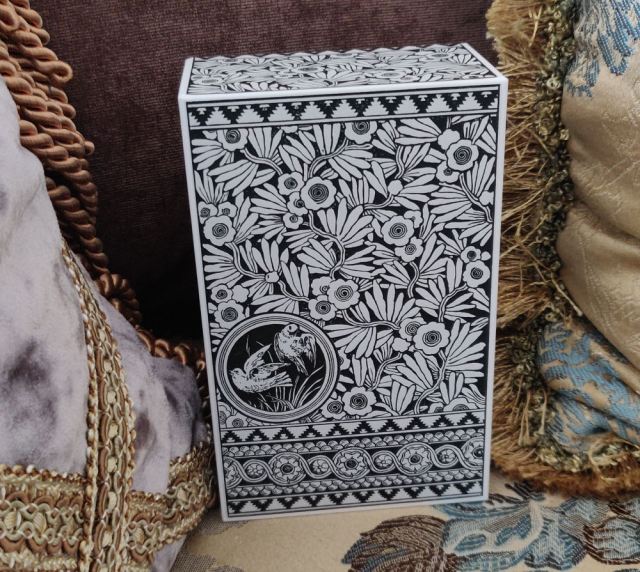 For more information about this deck or to learn more about Maree Bento, visit her website here.

FTC Disclosure: In accordance with Title 16 of the U.S. Code of Federal Regulations Part 255, “Guides Concerning Use of Endorsements and Testimonials in Advertising,” I received the Lua Tarot from the deck creator for prospective review. Everything I’ve said here is sincere and accurately reflects my opinion of the deck.

One thought on “The Lua Tarot by Maree Bento of DivineMuses”