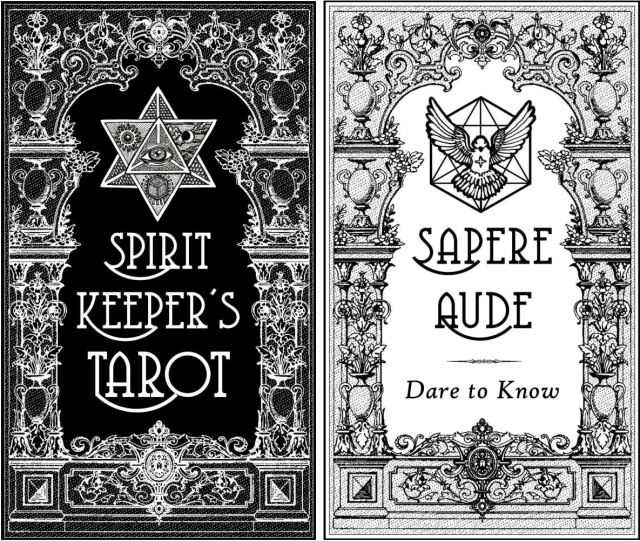 Both the black and white First Edition and the sepia-toned Vitruvian Edition were limited editions and are now out of print. This is just a viewing gallery of the cards from both decks, side by side for comparison.

Important Note About Color Display: The image files of the Vitruvian Edition you see here are JPG files in 72 dpi resolution and in RBG rather than CMYK. The 500 dpi art gets converted to CMYK for printing, which changes the color tones. The actual printed cards will be significantly more muted in tone than what you see here. The contrast will also be lessened in the actual printed CMYK values. The RBG values displayed here are brighter than how they will look in physical print. Also, your screen’s display settings could impact the color tones.

The card backs are reversible and the symbolism in the design is explained in The Book of Maps. You can click here to read more about that book (you can still purchase standalone digital files of it, along with a workbook and Majors-only coloring book) and also read excerpts.

The First Septenary is the exposition of the narrative arc where the precise setting of a life path is revealed. Key 7: The Chariot marks the rising action. Reading Papus, these Keys convey Divine Providence and how to make sense of that Providence as it pertains to our inner selves. The First Septenary is about making sense of who we are, based on where we’ve come from, what influences us, and how we commence the journey of self-actualization.

The order of Keys in the Second Septenary initiates your understanding of the cosmos, or as Papus notes, the keys to understanding the Constitution of Man.

An entire section in The Book of Maps is dedicated to explaining the Key 8 and Key 11 discrepancy, why I think Waite went with Key 8/Strength and Key 11/Justice while Crowley went with Key 8/Lust (Strength) and Key 11/Adjustment (Justice) based on their differing theologies and finally, what all this has to do with the doctrine of the Holy Grail and the Two Paths to the Grail.

I’ll also be explaining why Key 7 features the cardinal zodiac signs, Key 14 features the mutable signs, and Key 21 features the four fixed sighs. Or… doh. Did you figure it out already? =)

The Third Septenary reveals the Keys toward ascension. Papus describes it as the revelation of the Human Will, or more precisely, the divinity and power of Will, integrating Providence and Destiny.

And that concludes our Majors.

There are four elemental worlds that the One Creator bore from Logos, the four letters of the Creator’s name. From those four elemental worlds, we can see the 22 facets of the Creator, which are the 22 primordial spirits of the Major Arcana. To then materialize from the spiritual realm into the material and corporeal realm, four nucleic seeds are planted, and those are the Aces.

The Realm of Twos is God’s agent in Creation. It is the intellection behind that creation. The Twos in tarot express balance and choice.

The Discerning One needs to define the boundaries and scope of one’s own dominion, the moment of mapping out your ambition. In external alchemy, The Joined One guides us to choose our allies. In internal alchemy, this spirit guides us to unite our anima and animus. The Blind Seer helps us navigate the stalemate between the Ego and the Self. The Nocturne is balanced, harmonious change after the dark night of the soul.

The four Twos also designate the influence of the Egyptian ogdoad, or primordial deities, here on earth. These are the four gods and their four consorts. The Discerning One in the Two of Scepters is the union of Kuk and Kauket, bringers of light. The Joined One in the Two of Chalices is Nun and Nauneet, forces of watery chaos. The Blind Seer in the Two of Swords is Amun and Amunet, the hidden ones of oracles and prophecy. The Nocturne in the Two of Orbs is the union of Heh and Hauhet, the black, fertile earth of the Nile River. A section in The Book of Maps is dedicated to discussing the Egyptian ogdoad in the four Twos.

In freemasonry, Rosicrucianism, and medieval Christian mysticism, which in turn entered Western ceremonial magic, the pelican is one of the most important occult symbols. Here, you’ll find a pelican depicted in the Three of Scepters, Three of Chalices, and also earlier in the Majors, Key 3 and Key 12.

The Politic is an omen validating glory achieved. The Kindred is affinity within the tribe. The Bereaved is sabotage after fruition, but there is a foretelling of resurrection. The Mason is both completion and inauguration, with a materialized work product to show for yourself.

Oh wait what? Are you scratching your head? Is this me featuring the cards out of order? What’s going on here.

So this is the order your cards are going to come in new out of its packaging. I’m trying to tell the story of creation here. =) So first you’ve got the primordial powers, or 22 facets of the One Creator (who is actually two, but one as the Divine Androgyne).

The Aces are the primordial seeds. They’re sown and begin to form the intangible essence that will be needed for the tangible to manifest from, much like how ideas are intangible in our minds and the process that an intangible idea undergoes, passing through the physical body, to become work product. (We’re not at the work product yet.)

While we’re still on that psychic plane, though, the Empyrean Court, or highest caste of angels, comes into being, to connect us to Divinity, and to be navigate between the Two Worlds.

The Kings in tarot are depicted here in my deck as Archangels. And yes, I know the gender situation might trip a couple people up, but I think once you get into working with the deck, you’ll be able to overlook the gender situation and spot the Kings/Archangels immediately by their magic squares.

The Powers in each court wear armor and are formidable fighters. The Powers are a line of defense against demonic entities and malevolent spirits. Powers are always addressed by their respective titles, “The Shield.” Thus, the Queen of Scepters is The Golden Shield, the Queen of Chalices is The Ivory Shield, etc. The coloring notation of their shields (Golden, Ivory, Scarlet, and Ebony) is based on the four alchemical processes necessary for achieving the philosopher’s stone.

You can always tell that it’s a Queen court card because all Queens hold a shield.

The Virtues are angels who control the elements and sway the metaphysical forces behind the materialized forms of the physical world. Virtues are called upon to help the keeper control that Virtue’s corresponding elemental suit. Virtues correspond with the four Knights in the tarot.

The angelic Strongholds are messengers who bring signs and miracles. They make the Divine Will known to the keeper, bringing the Gnosis of God’s gifts. The Strongholds are also the mediators and connecting points between the keeper’s constructed realms of the inner temple and of Heaven. The keeper calls upon the Strongholds as heralds, to deliver messages to others, or to fetch and bring back messages from God.

The fours represent reign, rule, and order. Here, we also see God’s presence below the abyss, initiating the architecture of the Divine Plan into material reality. The fours represent the sequence that formulates the Rule of Law. The fours are about strength, power, and conviction.

The Demiurge builds our physical platform of success. The Hollow Void builds our psychic inner platform for spiritual strength. The Convalescent is the net loss after construction. The Conservator is the maintenance work, investments, and natural resources needed in reign, rule, and order.

The fives represent the principle of Motion coming to propel Matter. Fives indicate destabilizing forces. The theme of the fives in the Minor Arcana is storm and stress, and yet emerging from the tensions of conflict will be that which enables greatness. This is warrior consciousness, perspiration, the source of courage, and that which is the inner drive. The fives express the discernment of spirits, both good and evil.

The Contender is the spirit of a zero sum game. The Grotesque is loss after the waning of joy, a disfigurement, a mystery, and unseen power rising. The Hector is defeat by unfair advantage. The Vagabond is alienation.

Pythagoreans called the number six the Number of the Soul. This is harmony between heaven, earth, and man. After the material world is formed, it remains connected to the spirit realm from where it came, and the sixes in the Minor Arcana are the remaining tethers and bridge between the material and spirit.

Seven is a sacred number that represents the Divine Law. Pythagoreans called it the Number of Life. The Realm of Sevens is the realm of knowledge and wisdom. This is the world-weary spirit.

The Dark Horse is the underdog who blindsides the naysayers to emerge victorious. The Corrupter is illusory success and the allegory of the seven sins. The Rogue is mischief personified. The Gardener is the nature spirit of low magic, and the spirit of harvest.

The Realm of Eights is the realm of manifestation. It is the number of the Universal Order and said to symbolize the Eleusinian Mysteries. In Burmese astrology, the number eight symbolizes cosmic balance and energetic equilibrium.

The Realm of Nines is the realm of spiritual ascension. It is the realm of artists and healers. With nine comes spiritual cultivation and karmic lessons. The number nine is divine, receiving completion from three triads—it is the summit of theology. Nine is the number of crystallization.

The Malaise is the questioning of purpose and why we suffer. It is the wearing away of vitality and innocence when we’ve seen too much of suffering in this physical world. The Wish Granted, in contrast, is the neverending blessing of abundance and when all that we think of gets manifested. The Haunt is the haunting of our own past actions, our inner demons that we have not resolved, our regrets, and the actions we have taken both against others and against ourselves. The Eminence is upward mobility and material fruition from our own independent hard work.

Ten is the number of transformation. It is the mounting atop a peak and now the waning or unwinding period down, to repeat the cycle in another incarnation. It is the world-and condition—Man has created for himself.

The Burdened One is oppression we bring onto ourselves when we don’t temper. The Joyous One is happiness we’ve earned. The Destroyer is downfall as a consequence of our acts. The Dynasty is wealth multiplied.