I’m new to the craft idea of an altar-in-a-tin. The other day while surfing Pinterest (that never ends well for me), I came across photos of people who DIY-ed their own miniature altar kits or prayer boxes using a candy tin. These photos were incredible. The Pinterest excursion led to Etsy and three and a half hours later that lazy Sunday, I get the brilliant idea that I can DIY my own altar kit (or prayer box). 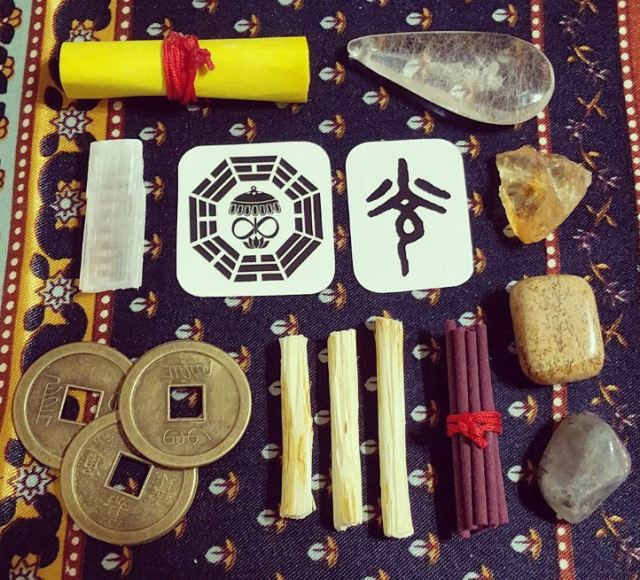 Above you see my initial proposition of contents. Given limited parameters (e.g., don’t want to leave the house to buy anything; must finish this crafty project today so must utilize what I have in my house right now; must be itty bitty tiny because this f****** tin of mints is itty bitty tiny; etc.), this project turned out to be harder than I expected.

For example, for Fire, my initial thought was a matchstick, but somehow in this giant house of ours we didn’t have any matchbooks. Not a single one. Believe you me, I searched. A friend on social media suggested a birthday candle. Unfortunately, I did not have any of those either. So sad. Oh, but gemstones and rocks I had aplenty, so that’s why in the photos here you see an over-reliance on stones.

Major disappointment: I did a wretched job spray-painting my mints tin. I did the paint job in the solarium, and not wanting to get spray paint in unwanted places, I sprayed the nozzle too close to the tin. Bad idea. Resulted in a wretched uneven coating.

My solution for an uneven first coating was to try again. And again. Try, try again is not good advice for spray-painting coats of paint onto a mints tin. It started to feel like one of those YouTube 100-coats-of-nail-polish stunts. The paint coating was getting thicker and thicker. 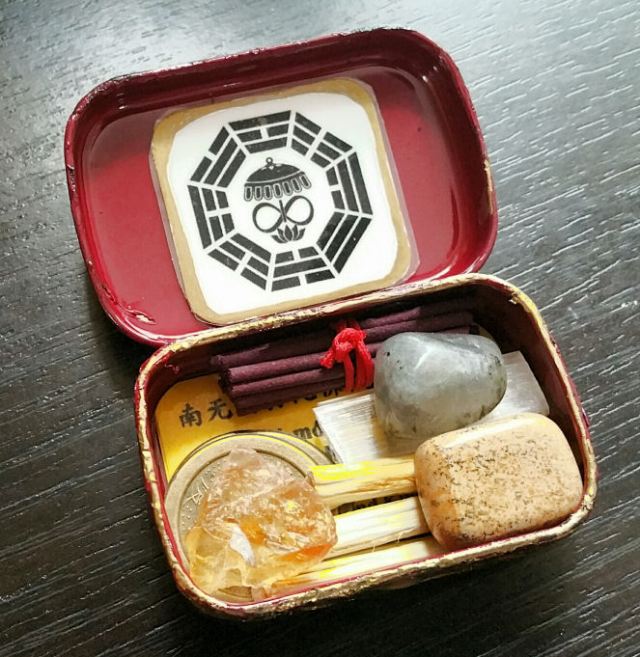 The uneven paint job was the worst along the edges of the tin, so I thought to line it with a gold paint marker. That was also a bad idea. In the above photo, in the bottom left corner of the lid, you can see a scratch mark, which reveals just how thick of a coating of spray-paint I applied. Oops. Yeah. I do not see a future of Etsy shop ownership for myself. But no more self-deprecation. This project was loads of fun! You definitely need to try it for yourself. 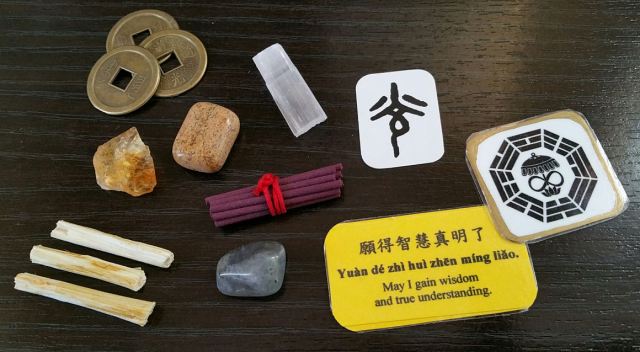 In the end, the above is what actually fit inside the tin box. I had to remove a couple of the initially proposed items. From the top left corner, you have three I Ching divination coins (these are faux ones), below that the row of stones, left to right: raw citrine quartz, a pillow of picture jasper, and selenite. Over in the bottom left corner are three pieces of plum wood from my backyard.

Then a bundle of incense tied up with red string (red string is metaphysically significant in most strands of East Asian magical practices) and below it a piece of tumbled, polished labradorite. It’s actually a pretty neat piece of labradorite; you can’t tell from the photograph. When it catches the sunlight, it’s iridescent and just beautiful.

Finally, I printed out on heavy cardstock various symbols and a two-sided prayer/mantra card. The prayer card is for show here, I confess. If this was going to be a strictly personal and private thing, I wouldn’t have put the Chinese, the pin yin, and the English translation.

The various items I selected for the altar kit have to serve multiple purposes and may take on dual meanings. For example, in the above photo, left to right is represented Fire, Water, Air, and Earth.

I also utilize the Wu Xing, so now we need to undergo a bit of metaphysical musical chairs. Above, left to right is Wood, Fire, Earth, Metal, and Water. What was Air for the Western dignities is now Fire for the Eastern dignities. Doh. Hey, it’s all about the intentions, right?

The altar kit set turned out to be quite cute. So, for instance, in the above, we see a little metaphysical grid thingie. Raw citrine quartz is wonderful. Its properties can be utilized and transmuted for wealth and prosperity, but it is also a general air purifier of sorts, and will energize and invigorate the Qi of a given area, or so goes Chinese Metaphysics 101. Plum wood is an amplifier. It strengthens. It brings power, endurance, and longevity. Then with the I Ching coins, you can use the yin or yang side as needed to tap into that energetic binary.

The incense bundle is also practical. I can fold a makeshift incense holder wherever I am and prop up one of those incense sticks, and light it. Voila. Sandalwood incense on the go. I also have that laminated placard of the Later Heaven ba gua, or eight trigrams, encircling a parasol, infinity symbol, and lotus blossom. To talk about the uses of a placard of the ba gua would be quite the long conversation, so I’ll just draw an over-simplified comparison. To me, its uses and function is likened to the pentagram as an altar tool in Wicca. (Someone is bound to let me know whether or not that comparison works.) But that would be my best “lazy explanation” for that ba gua placard’s function.

Over on the top right corner, there’s a placard for “Guang,” written in Zhou Dynasty Chinese oracle bone script. My best explanation for what that means is White Light. But somehow in Chinese, “Guang” sounds less fluffy or New Agey than “White Light.” For me, it denotes Divinity. Then of course there’s selenite. Selenite for space clearing, selenite to represent the metaphysical element Water, selenite for drawing in the moon energies (and so the citrine can be used to draw in the sun), selenite to denote Spirit, selenite to amplify Guang or White Light, and selenite as an energetic conduit, as pictured below.

However, there were no peach tree branches on the ground in my yard that day and when I asked the peach tree for permission to cut off one of its branches, I was denied. Dammit. Rejected. I told the peach tree he was an asshat and went to collect the fallen branches under my plum tree. (And for those who are getting fired up about my hostile behavior toward said peach tree, relax. I was just kidding. In actuality, I squeaked out “that’s okay,” cowered away like the wimp that I am and backed off.)

The items I selected turned out to be versatile. There are multiple ways this kit could be useful. Since there’s room in the box, later on I’ll probably add a matchstick or two. A friend on Facebook mentioned folding a miniature paper crane to represent Air. Cranes as animal symbolism is also very significant to my practice, so that idea is wonderful. I might add in a mini paper crane. A tiny repurposed perfume vial can contain consecrated moon water. That’d be neat, too. Then a second could contain sea salt. I may need to upgrade to the larger normal size Altoids tin rather than the Smalls one. (The plural and capital S is what the mint is called; I wasn’t intentionally trying to be weird.) 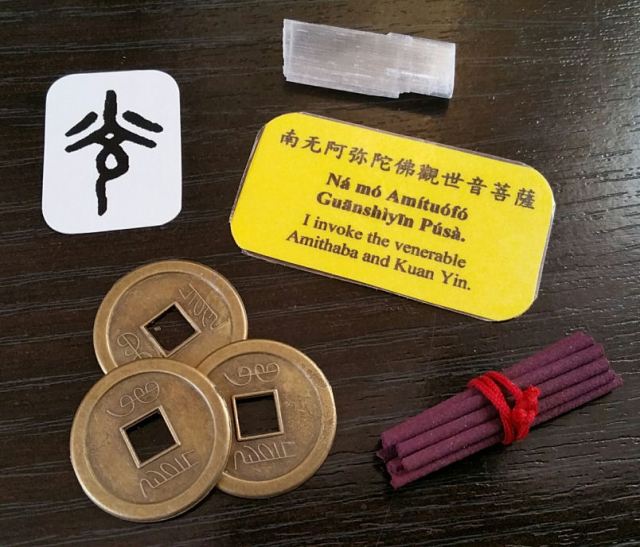 The altar kit also functions for divination. Clear space with either the selenite or citrine or both. Light incense as offerings if you so wish. And there you have three coins for an I Ching divination.

Here’s why that could actually be practical for me. 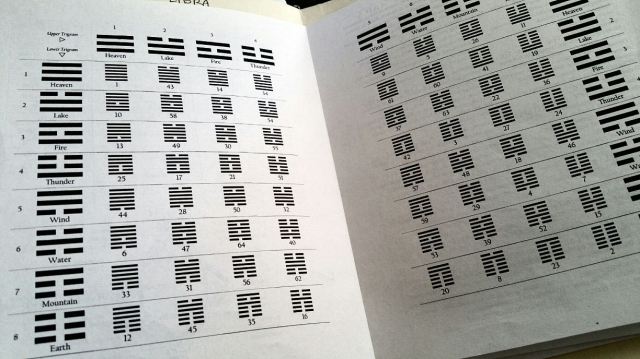 At the back of the day planner I carry around with me everywhere, I have printed out insert pages, which include a hexagram graph for I Ching divination. For those of you who aren’t familiar with the graph, it’s what you use to identify the hexagram result of your divination. You identify the upper and lower trigrams, cross-reference and voila. You know your hexagram result.

I’ll be honest– when I started the DIY altar kit in a tin project, I did not have serious intentions for it to be useful. I don’t really need a portable altar or prayer box. But now that I’ve made it, it’s soooo cute I just have to carry it around in my handbag! Once I acquire a new Altoids mint tin, though, I’m going to make a new box for my contents. I really, really did an awful job on the box, but as a first attempt, it could have been worse.

I hope you’ll give this DIY project a try and if you do, share your results!