Brigit’s BiddyTarot is one of the most popular (I even dare say the most popular) tarot spot on the web. And it’s for good reason, too. She sustains the site with incredible content. Brigit is compiling a free e-book, Real Life Lessons from the Major Arcana, a collection of 22 essays by 22 tarot authors, each writer covering one Major Arcanum.

I chose Key VII: The Chariot for personal and sentimental reasons. Click on the above banner to go straight to my article over at Biddy. Also, be sure to download the entire e-book for FREE (how cool is that!) by clicking on the below banner or going here. 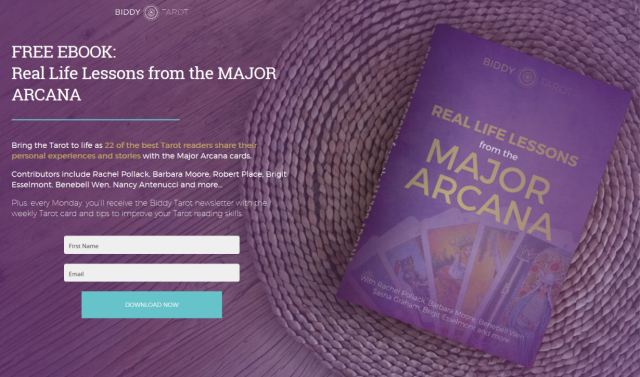 A few highlights from my article, “Key VII: The Chariot, Chariot Mysticism, and Finding My Path.”

***  Key VII: The Chariot is rooted in Merkabah or Chariot mysticism per Abrahamic mythos. It comes from Ezekiel 1 in the Holy Bible.

***  As the story goes, Ezekiel sees Spirit as a fiery chariot amidst white light, glowing metal, and wheels of sparkling beryl. Before the helm of the chariot are four figures, each with the face of a lion, a bull, a man, and an eagle. A symbolic representation of these figures appears in The Chariot card of the Thoth Tarot. It also appears in the final card of the Major Arcana, Key XXI: The World, for all three of the traditional tarot systems—the Marseille, Rider-Waite-Smith, and the Thoth. The figures represent the four directions and four corners of the physical plane that the Chariot traverses. The lion, bull, man, and eagle also represent the four fixed zodiac signs in astrology—Leo, Taurus, Aquarius, and Scorpio, corresponding with the four elements, Fire, Earth, Air, and Water. Fixed signs in astrology are the signs of divine order.

***  In other words, The Chariot is the culminating point of self-discovery and self-knowledge, and that is the spiritual essence of the card. When The Chariot card appears in your reading, it is an affirming omen that you are on your way toward actualizing your most aspirational objectives. Recall that the chariot is powered by seraphim, and angels are divine messengers.

***  It was The Chariot card that pulled me back to the tarot and propelled me on the path to publishing a book on the subject.

***  I also identify with The Chariot card through my personal numerology. The Chariot is associated with Life Path 7, and I am a Life Path 7. The Count of St. Germain (1712—1784) noted that The Chariot card in tarot represented intellectual power and control of space-time. It portends one with the sovereignty of mind, and who therefore possesses the power to unlock the mysteries of life. These qualities of The Chariot are also the qualities wielded by Life Path 7s.

***  After Phaethon’s death, he became a constellation—Auriga, the charioteer. As it would be, in both the Marseille and Rider-Waite-Smith Chariot card, the charioteer’s crown and canopy are covered with stars. Even the charioteer’s armor bears a resemblance to the constellation Auriga. Upright or reverse, The Chariot card is about determination and willpower, though in reverse, recalling Phaethon, we are being warned of the consequence when there is determination without control. I find that the reversed Chariot appears in my readings when I reach a point in my life that requires greater control from me.

***  The Chariot card is a sign to the seeker to embark on the path of the seeker’s life purpose and higher calling. It is the Major Arcanum that steered me toward metaphysical study; it heralded the writing of Holistic Tarot, my first book, and thrust me on a diametrically different path from the one I was on before.

I highly recommend that you just download the entire e-book. The collection of essays is an amazing read. Robert Place tackles The Fool. Melissa Cynova, the High Priestess. Ethony, The Empress… which makes perfect sense, omg, she totally embodies that empress-y vibe. Alison Cross, Barbara Moore, Rachel Pollack on The Hanged Man, Gina Thies Temperance, Kate (or was it Veronica) who wrote on The Devil, the tarot diva Sasha Graham tells you about The Star, Kelly Ann-Maddox of the Four Queens, and we conclude with the amazing Nancy Antenucci, and seriously… all the writers here are ah-mazing I didn’t want to get excessive and list them all out.