What we call the “Petit Etteilla” refers to a class of 32-card piquet decks for cartomancy based on Etteilla’s 1770 text, which used the courts (Kings, Queens, Jacks), Aces, Tens, Nines, Eights, and Sevens from a playing card deck. To the 32-card pack, Etteilla added a 33rd card called “Etteilla” to designate the querent. And thus he proposed that the original Egyptian tarot pack consisted of 33 cards.

UPDATE: I referred to this deck as a “Petit Etteilla” because that’s how the British Museum referred to it. However, one of our community’s preeminent tarot historians, with a particularly vast amount of knowledge on the Etteilla, John Choma, came back with some clarifications.

This is not a Petit Etteilla deck, but an unrelated deck called the “Livre du Destin” (or Book of Fate), created some time in the mid-1800s. You can check out a few historic examples (thank you, John, for the links!): here (M. Violet, éditeur), here (Le Livre du destin), and here. These images are also notably similar to other 19th-century oracle decks like the 53-card Sibylle des Salons and the 36-card Petit Cartomancien.

This download of Petit Etteilla card images, courtesy of the British Museum, is the edition published between 1860 and 1886 by Jean-Henri Pussey in Paris, France. The originals were 70 mm x 111 mm, hand-colored etchings on pasteboard.

If you’re savvy with digital photo editing and graphic design, then work directly from the 70 mm x 111 mm originals, and format the layout design to your personal preferences.

To upload the card images onto a print-on-demand site like Make Playing Cards (MPC),  you’ll need to re-format it to one of their standard dimension offerings, such as 70 mm x 121 mm (standard tarot card size) with 36 mm bleed margins, I’ve done that below. But my touch-up work is imperfect.

If you’re not picky and my tinkering of the originals is acceptable to you, then you can upload the 70 mm x 121 mm MPC formatted version directly onto MakePlayingCards to order your own tarot card size copy of this historical deck.

But if you are a pro with graphic design yourself, then I strongly recommend working off the Originals (70 mm x 111 mm) and tinkering with those. 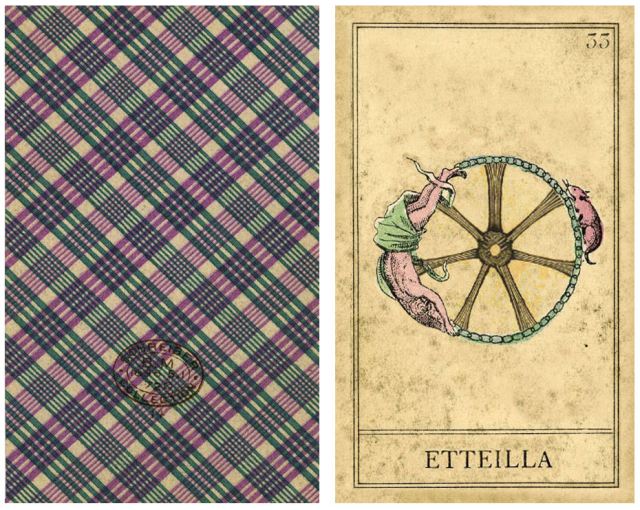 To use this version of the Petit Etteilla in the way Etteilla intended, as a 33-card deck with the Querent card, I’ve added the above 33rd card to the 32-card pack  from the British Museum. 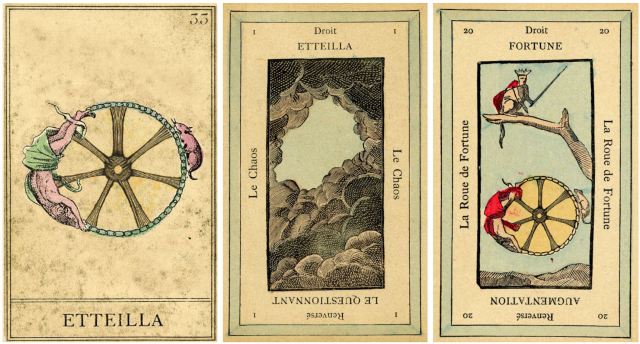 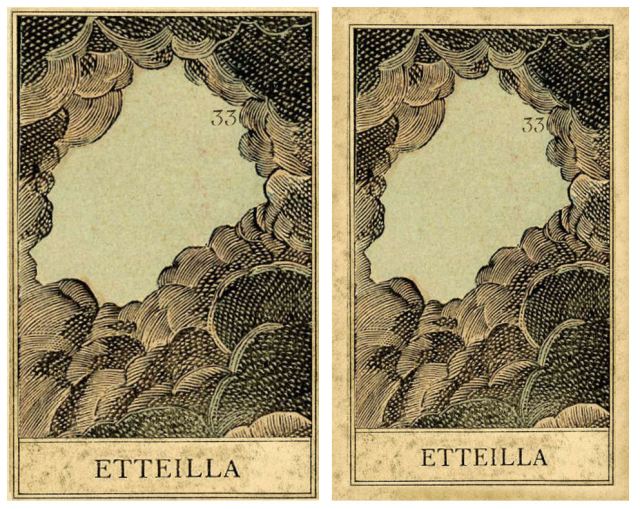 UPDATE: Here’s an alternate reconstructed Card 33 version, based on Card 1, Chaos (or the male significator card) from the Grand Etteilla. So if you prefer this version over the other one with Rota Fortuna, click on the below to download the JPG image files. 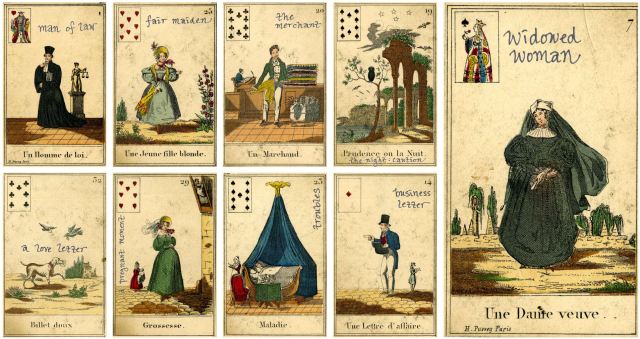 The facsimile images are in French, and if you’re not fluent in French, then I recommend hand-writing the English translated keywords onto the cards after you’ve printed them out. It gives it a much nicer aesthetic that way than if I typed the English onto the card images for you.

To accommodate modern sensibilities, I interpret the card assignments figuratively rather than literally, so for example, “A Widowed Woman” doesn’t necessarily mean a human female who has lost her spouse. Instead, I interpret it as indicating a past emotional loss that still has an impact on the present situation. Likewise, “A Widowed Man” means a past business or professional loss that still has an impact. A Man of the Law is interpreted to mean political, legal, or institutional influences. A Man of the Court symbolizes socioeconomic privilege.

You can download a little pamphlet of my card interpretations for the Petit Etteilla:

Here’s the text in a docx MS Word file so you can cut, paste, and use at will: