The Cirque du Tarot is a Llewellyn deck by acclaimed author Leeza Robertson and illustrated by Josh Tufts. I am a really big fan of Tufts’ art. It’s got this Neo-Impressionistic flavor with a little Georges Seurat inspiration. Tufts is a master at character design, which is why this tarot circus cast springs to life.

I love the way Tufts works with contrast and lighting. The colors are just absolutely exquisite. There’s almost a Moulin Rouge aesthetic in low saturation where the colors are pale, giving the art a misty, dream-like atmosphere.

If you can, click onto the photographs so you can view the layout of cards on a large monitor. Zoom in and take a look at the detailing. Don’t know if you’ve read Erin Morgenstern’s The Night Circus, but I’m getting those vibes as well.

For the court cards, the same digital image is used for each rank/title, with different coloring. In the above photo, the last four cards in the bottom row, which all look alike, are the four Pages. The coloring of the smoke around the mirrors is what lets you know which suit the Page is from. Some of the minor detailing in the backdrop also differ.

Above you see the four Knights and the four Queens. “The court of this troupe is not quite as you would expect, for it is not as vast as you are accustomed,” writes Robertson, anticipating how the court cards might be perceived. “Instead of sixteen members, you will find only four sharing the stage of the sixteen court cards.”

The subdivisions of the tarot deck are described as five acts, an intermission, and an encore. Act I introduces you to the main characters– the Major Arcana. A brief intermission takes you into the court cards, which represent the backstage where the actors are preparing for the next four acts of the show. Thus, the Pages are in a quiet dressing room. The Knights are non-binary, without specified gender roles. In all four Knights, the figure is preparing their dress.

Act II is the world of Swords, “where you will travel through space and time to see worlds within worlds.” Above you’ll see the cards Ace through Ten of Swords. I love the interpretation of this airy suit through the Cirque du Tarot– here is a “land of dreams and nightmares.” This Act is one of mentalism, delving into the workings of your mind. “They will explore your dreams, your fears, your nightmares, your points of inspiration, and your decision-making.”

Act III starts with a bang as the ringmaster lights up the stage with the fiery Wands. “It’s all fire and smoke,” is the tagline introducing the chapter on the Wands. This is the stage of the fire dancers. The Wands and the Pentacles suits in this deck stay the most consistent in terms of a limited color set following the elemental. There’s more color variety in the Swords and Cups.

Act IV moves us from fire to water and we flow through the world of Cups. And finally, Act V takes us to the land of Pentacles, where time, work, and gears grind together. These are the four worlds– the wonders of balancing blades, blazing fire dancers, water acrobatics, and clockwork machines. The Pentacles suit has a steampunk vibe to it, doesn’t it?

I love how Robertson stays “in character” throughout the guidebook. It’s written as if the tarot deck is a circus show extravaganza. 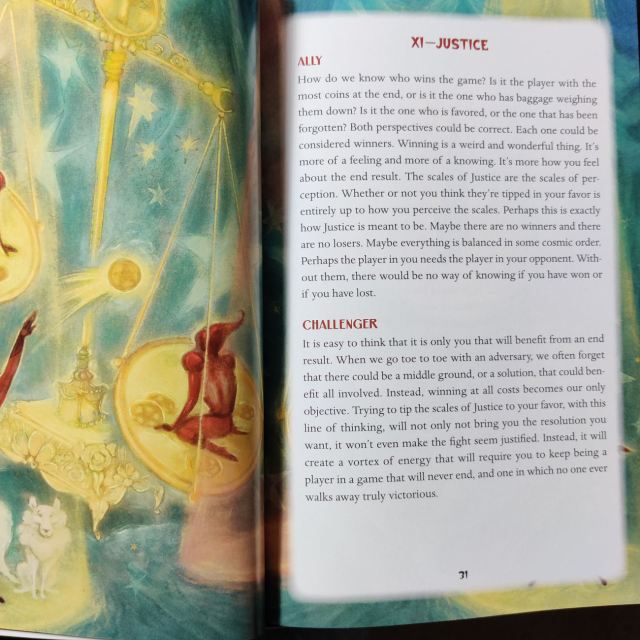 Yet it’s practical and will serve a tarot beginner well. For each card you get a full-page spread. You’ll get the Ally aspect of the card and the Challenger aspect. 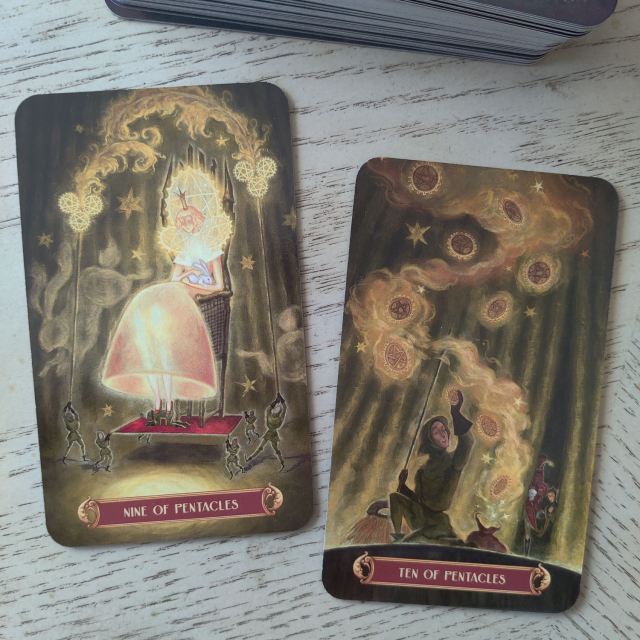 Whimsical yet mystical, charismatic with its humor and yet with Robertson’s masterfully written card meanings, a very readable deck, Cirque du Tarot is kitsch with substance. Tufts artwork plus Robertson as the ringmaster, with her mischievous-magical written text create a delightful chemistry. If you like the creepy-cute aesthetic or want to add a tarot deck to your collection that’s an homage to entertainers, then you’re going to love Cirque du Tarot.

FTC Disclosure: In accordance with Title 16 of the U.S. Code of Federal Regulations Part 255, “Guides Concerning Use of Endorsements and Testimonials in Advertising,” I received this deck and guidebook set from its publisher for prospective review. Everything I’ve said here is sincere and accurately reflects my opinion of the deck.