I’ve been at work on something, but in the meantime, wanted to come up for air and share this. Because I found it pretty cool, and suspect you might, too.

Well, the above is not it. That’s my own sketch of the Key based on Postel’s text.

Here’s the original illustration from the 1547 publication, Absconditorum Clavis by Guillaume Postel (1510 – 1581). 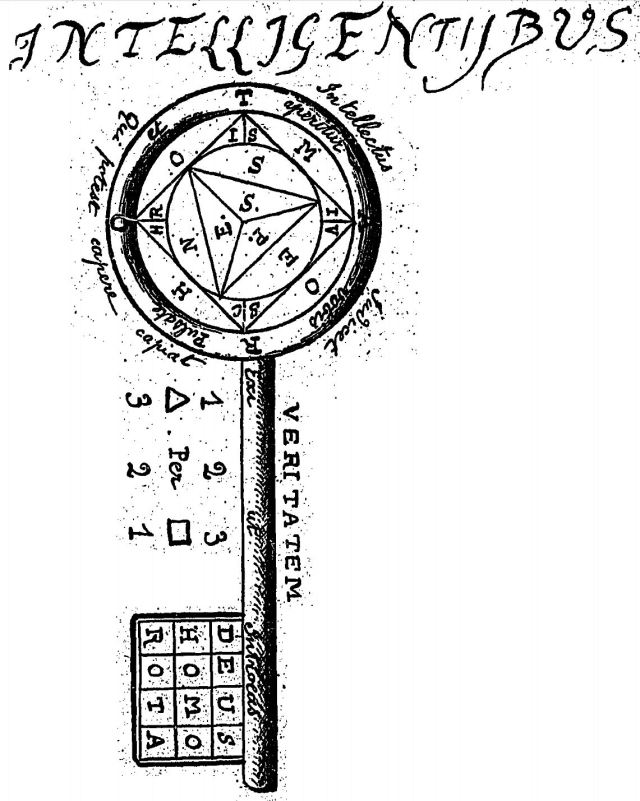 Postel was a truly fascinating figure and if you’ve got some time, read a biography on him. He also believed in the Eastern esoteric concept of soul dualism, though he framed it differently, i.e., instead of saying “yin and yang” aspects of soul, he said “female and male” aspects of the soul, with one being emotion and the other being intellect. Oh. Wow. Anima and animus, anyone? (Yeah, yeah, I know, not the same…) Nonetheless, bear in mind that Postel pre-dates Carl Jung by some odd 365 years.

Though he was (probably) misquoted by Eliphas Levi in Transcendental Magic: The Doctrine and The Ritual, a text Arthur Edward Waite later translated into English, with Waite’s own footnotes and correx to the Levi text (oh, dear Mr. Waite…), the principle of ROTA – TARO and the trinity it represents– Deus, Homo, Rota– is an important cornerstone in Western occultism. So it’s still worth the time to try and understand it.

I’ve translated one of the correspondence tables in Postel’s work and provided it below, along with a side by side comparison of Postel’s ROTA-TARO wheel to Waite’s, pictured on Key 10, the Wheel of Fortune.

Oh dear, oh dear, because we don’t have enough element to directional correspondences for us to choose from… =) See below for what I mean.

Here’s more of where that came from, for the curious, though it’s in French:

And that was a sneak peek of something in the something that I’ve been hard at work on. So to friends, family, and those who’ve been trying to get in contact with me, if I’ve been ignoring you, it’s not you, it’s me. I’ve been in my Obsess Mode working on this something. =)

Alrightey, it’s back to work for me. This was just something that really tickled me, so wanted to pause and share. ❤