Eugene Vinitski is one of the most innovative and intelligent deck creators I’ve come across. When I hear that he’s come out with a new deck, even before I’ve seen it, I get excited, because I know it’s going to be high concept and exquisitely executed. 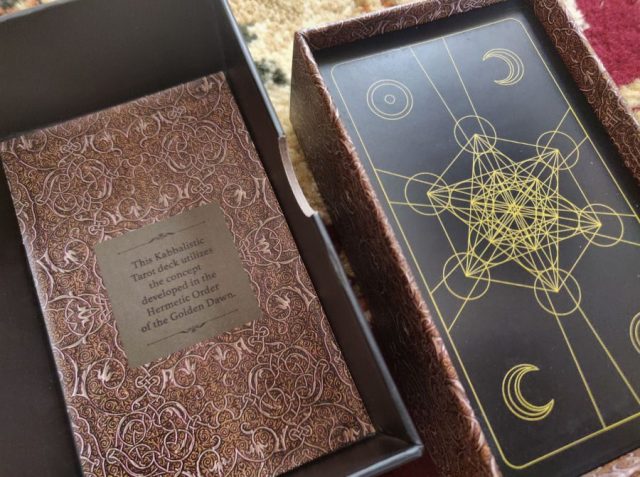 The Kabbalistic Tarot is no exception to that rule. Vinitski collaborates with Frater North on an esoteric study deck rooted in the Golden Dawn traditions and the results are stunning. The contrast on the box design between the ornate patterned lining and the solid black matte finish is perfection.

Celebrating the heritage of linking the Kabbalah to the tarot first prompted by Antoine Court de Gebelin in the 17th century and then later elaborated upon by Eliphas Levi, the Kabbalistic Tarot accentuates the correlations between the tarot and the Sephiroth Tree, where the Majors represent the dynamic part of the Tree, underscoring the paths of movement from one sephira to another, while the Minors are the rigidly bound static sephiroth.

There are 79 cards in total, with the extra card in the tarot deck being a colored diagram of the Kabbalistic Tree as you see at left in the above photograph. The color coding here is going to be significant when we go to  study the anatomy of each card design later in the deck.

The card backs are reversible and beautiful. It features the hexangle, per the Golden Dawn, or a hexagon emanating with reference points that outline both the hexagram and the hexagon. This is the Tiphareth, or the sixth sephira. This is the symbol of the cosmos, with the six points for six of the Sacred Seven planets in traditional astrology and the rays emanating out signifying the sun. The six doubled, for twelve, stand in for the twelve zodiac signs.

Let’s start with the little white booklet. Vinitski’s aesthetic point of view is superb, or at least it’s absolutely in line with what I personally love.

The above page from the little white booklet is your key to everything you see on each card. Later you’ll see how on every card, above the Kabbalistic Tree of Life are these arcs, which symbolize Ayin Sof Aur, the Endless Light.

On the Majors and the courts, you’ll see an outline illustration of the tarot card image in the Marseille tradition. On the pips, only one image of the suit symbol is given, e.g., the outline of a chalice on all Cups cards. The pips also feature the decan rulership correspondences. 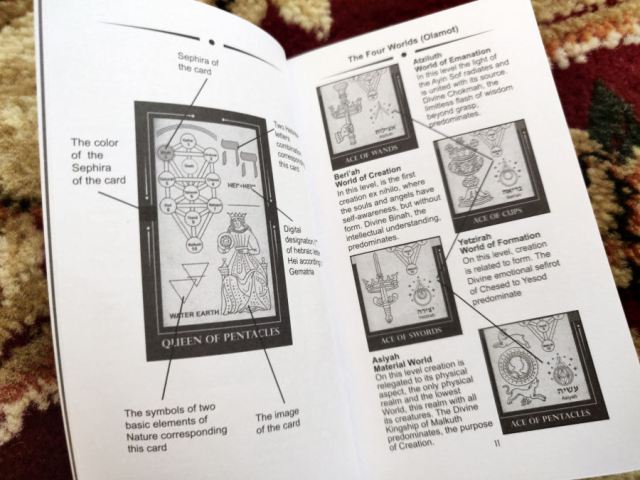 The little white booklet offers a surprising amount of information. For each Key in the Majors, for instance, you get several paragraphs on the Kabbalistic correspondences per the Golden Dawn, the astrological correspondences for each Key, and then the attributed meaning for divinatory interpretation. You’ll see the meanings ascribed feel quite Marseilles to me. 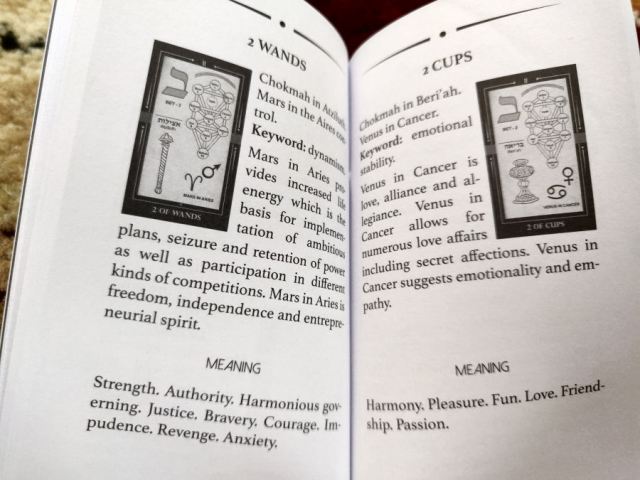 The Minors are given single page treatment and are a lot more concise than the Majors. You get the Kabbalistic attribution, a few keywords, and then the significance of the decan rulership correspondence that round out the card’s divinatory meaning.

In the bottom left corners of each Major you’ll find either the zodiac, planetary, or elemental attribution under the Golden Dawn system. In addition to the color coded patches along the vertical margins, you also get the corresponding sephiroth and paths shaded in on the Kabbalistic Tree diagram.

Looking at Judgement and The World close up, Key XX corresponds with the pathway between Hod and Malkuth, and per the color-coded key card, Hod is red and Malkuth has the wheel of four colors. Thus, you see the patch on the right side of Key XX to bear the four colors. Then for added emphasis, that pathway is shaded in on Tree pictured on the card, along with the corresponding Hebrew letter, the image of Judgement from the Rosenwald deck, and then the elemental, Fire.

Design wise, I love the added touch of the tinted background, giving the cards the aesthetics of old parchment. You might not be able to tell from the photographs, but the borders of these cards are gilded. 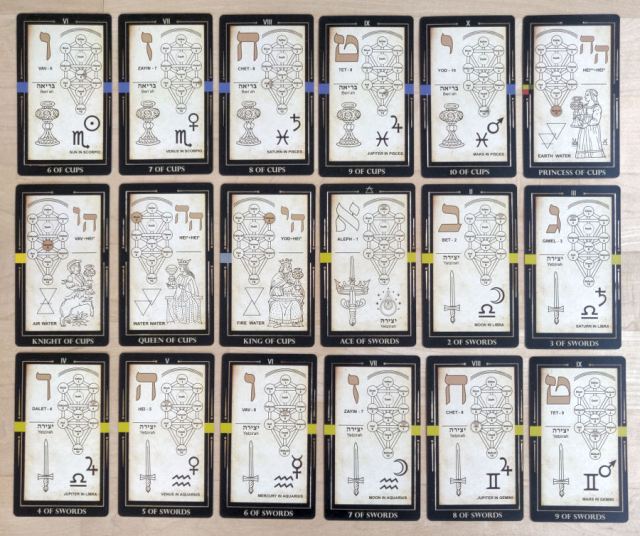 In the Minor pip cards, both patches along the vertical margins are the same color, noting the elemental association for the suit. Thus, all the Cups cards bear blue patches for Water, yellow on the Swords for Air, and earlier we saw red on the Wands cards for Fire. Later for the suit of Pentacles, you’ll see patches of green for Earth.

The four Aces signify the Four Worlds (Olamot). So the Ace of Swords, for instance, pictured above, signifies Yetzirah, the World of Formation. This is the intellectual plane.

Note earlier how Key VIII is Strength and Key XI is Justice, honoring the switch that the Golden Dawn makes in the tarot architecture and that we see in the Rider-Waite-Smith deck (though Crowley switches it back later in his Thoth deck to mirror the original Marseille numbering; here, we’re also see tarot card images from the Marseille tradition, i.e., the Rosenwald deck), along with calling the suit Pentacles rather than Coins or Disks. If you’re looking to hunker down and master the GD system of attributions for the tarot, the Kabbalistic Tarot is going to make for a fantastic study deck.

The quality of this deck is luxury all around. I love the cardstock, the matte finish, the gilding (though the edges of the cards are not gilded; just the borders and the box design), and the attention to detail Vinitiski has devoted to crafting this deck.

In terms of reading with the deck, I find that I apply a more Marseilles-based interpretive approach when reading with Kabbalistic. If you’re trying to get a handle over tarot and astrology, this is also an incredibly useful deck for that. I’ll work with transits astrology, check ephemeris tables for the year, and compare astrology in terms of timing alongside the cards drawn in this deck.

Kabbalistic Tarot works not only as a functional tarot deck for divination, but it’s also a meditation deck, as Vinitski notes in the product description. For me, it’s an exemplary study deck. These cards, a few good books on the tarot and Kabbalah, plus an enlarged sheet of that Tree of Life diagram, and I think anyone will be armed for mastering the GD correspondence system.

For instance, as learning cards, this deck helps reinforce in you that the suit of Pentacles and Earth are part of the Material World, Asiyah, as noted right there on the card, along with the Key’s links in gematria.

You can order your copy of the Kabbalistic Tarot from Vinitski’s Etsy site here.  There are only 500 copies of this deck, shipped to you from Switzerland, and are a collectable limited edition piece, with a certificate of authenticity signed by Vinitski and Frater North. On his shop you’ll also see still available copies of Venetian Tarot, which I highly recommend you snag your copy of. You can read my review of the deck here.  By the way, his Etsy site also offers some really beautiful hand-crafted artisanal tarot jewelry that are fairly priced. You’ve got to check it out! Holiday gift ideas, people! =)

FTC Disclosure: In accordance with Title 16 of the U.S. Code of Federal Regulations Part 255, “Guides Concerning Use of Endorsements and Testimonials in Advertising,” I received the Kabbalistic Tarot from the deck creator for prospective review. Everything I’ve said here is sincere and accurately reflects my opinion of the deck.