The Starlight Dragons Tarot by Nora Huszka and Steph Engert was a deck that celebrated the power, magic, wisdom, and world mythology of dragons. You can read my past deck review here.

The subsequently released companion book, Travelling with Starlight Dragons written by Steph Engert now delves into using the deck as a shamaness, unveiling the association between serpents and dragons with the mythic, healing, and transformative powers wielded by the shamaness.

As early as the Paleolithic Age, about 40,000 years ago, the Great Mother goddess was associated with the serpent and dragon figure. (This reference becomes relevant when we get to the journey through the Majors in Starlight Dragon…) 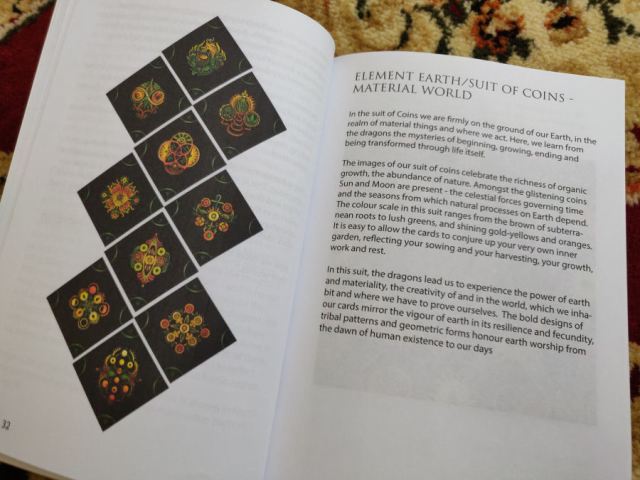 For ages on after in many regions of the world, dragons signified the Divine, from the Rainbow Serpent of Australian aborigine cultures to the Naga in Hindu and Buddhist traditions, and association between the dragon and female deities in occidental civilizations. 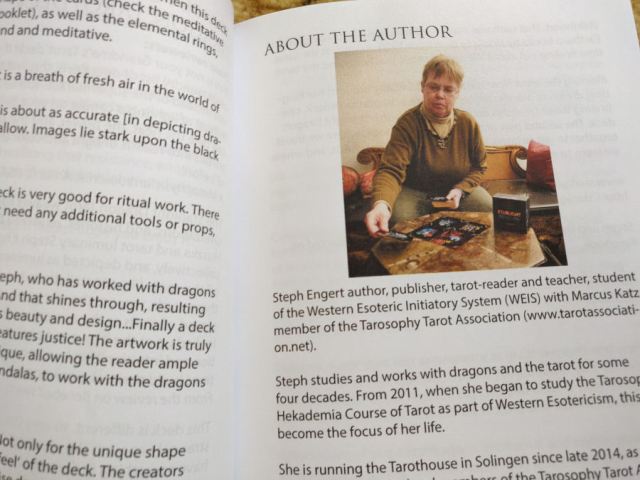 Starlight Dragon Tarot  was a powerful tool for mapping out the universe of dragon mythos, offering 79 total portals or as Engert calls them, “invisible knots binding the Universe.” Traveling is an indispensable operation manual for the Starlight Dragon deck, with Part I of the text focusing on the Minor Arcana, Part II on the court cards, and Part III delving into the Majors.

Part IV a discussion with the Nora Huszka on artist intentions. One collaborator and the author of the guidebook interview the other collaborator, the artist of Starlight Dragon. It’s brilliant and was a joy to read.

The final Part V then covers practical spreads and exercises for working with the tarot deck.

The book includes full-color illustrations of the Starlight Dragon Tarot and spans over 250 pages that includes a bibliography. A Foreword written by Camelia Elias who contemplates whether the sun depicted on The Tower card of the Marseille deck is the mouth of a dragon spitting fire. 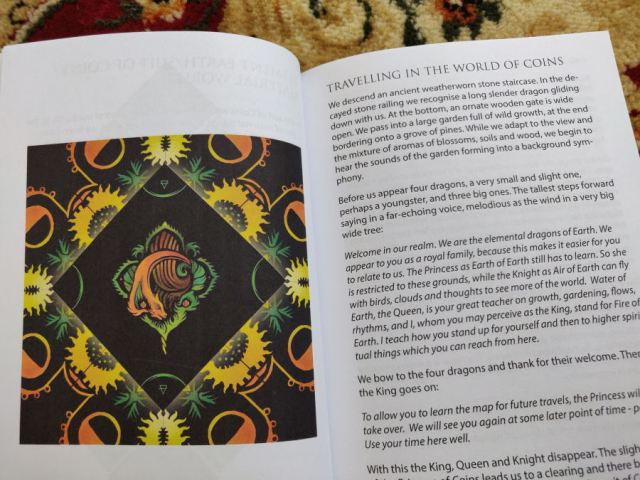 In the suit of Coins, corresponding with Earth, dragons such as the Australian Rainbow Serpent rule earthly matters, alongside the African cousins of the dragon. Here, the dragons are the outline of landscape features as revealed in Chinese feng shui, or dragon veins that forge the topography of our lands, resonant with the sacred sciences of the Celtic druids. These are the particular knots of the universe that offer us treasure. 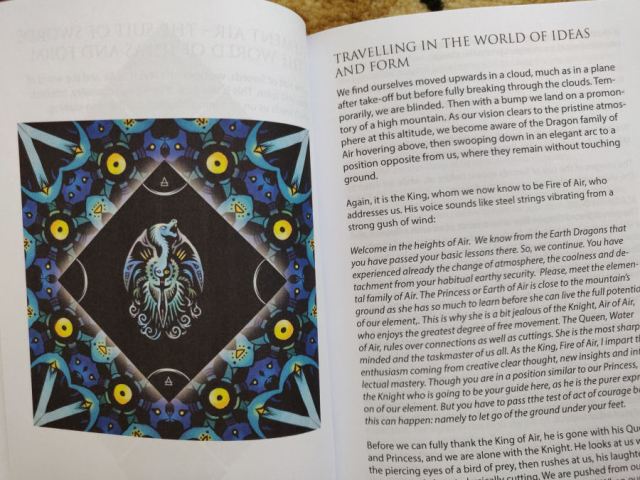 In the suit of Swords, corresponding with Air, the dragons are in flight, winged and the source of our weather, from rain and storms to thunder. Druk, the Thunder Dragon of Bhutanese lore, along with dragons as weather makers in the pagan traditions of Eastern Europe, govern this elemental realm. This is the suit in which we feel the breath of the dragons. 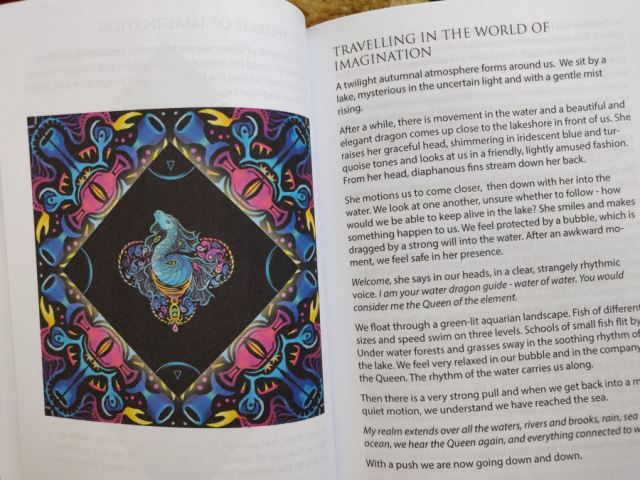 In the suit of Cups, for the element Water, we see the link between dragons and serpents, and the chaos of primeval waters that Tiamat of Mesopotamian mythos or Vritra in the Rig Veda represent. This is the realm of the four Chinese dragon kings of the four seas. Here, we also see the Greek Hydra. 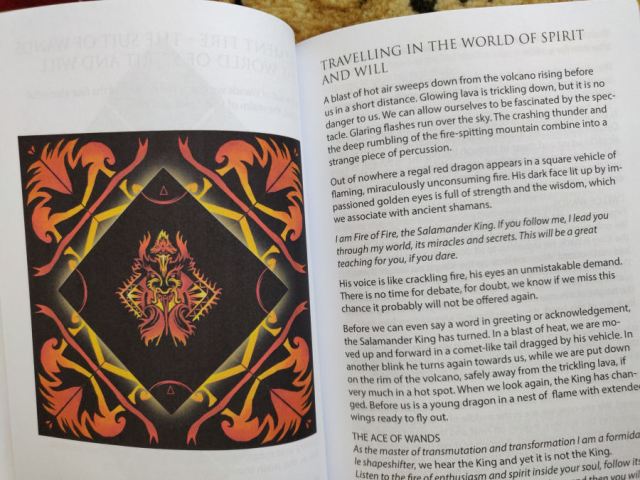 Finally, the suit of Wands, for Fire, is the fire-spitting dragons linked to volcanoes, such as the Typhon in Sicilian legends linked to Mount Etna. This is the Dragon’s Triangle, or Devil’s Sea in south of Japan. This is the North American myths of dragons as lightning. Here we see the ouroboros and the Great Work in the emblems of the dragon. 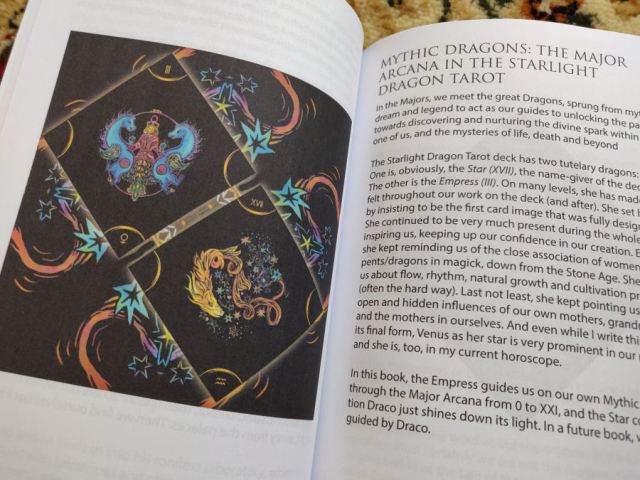 These notes and poetic, vivid descriptions of dragon legends from every corner of the world from every chapter of history are painted onto the pages of Travelling. On Key 0: The Fool card in the deck, we meet the Original Dragon of Limitless Creative Energy, a red spark borne out of the blackness of infinity.

Throughout the Majors, rather than describe the sequence of the Major Arcana Keys as the Fool’s Journey, Engert describes the sequence as the journey of the Empress. It is the Empress who is our guide through the Keys, hosting us through her garden and her domain.

The Empress welcomes us into the void in Key 0; then directs us to look at the northern skies at Draco for Key 1; and we are lifted into the skies by on a copper chariot pulled by two azure dragons in Key 2: The High Priestess. Key 18 returns us to the grounds, upon blackwater shores where we see the reflection of a waning silver moon.

These are the beautiful narrations in Travelling as if the entire book itself is a guided exercise in shamanic journeying, navigated by our guide, the greatest shamaness herself, The Empress. 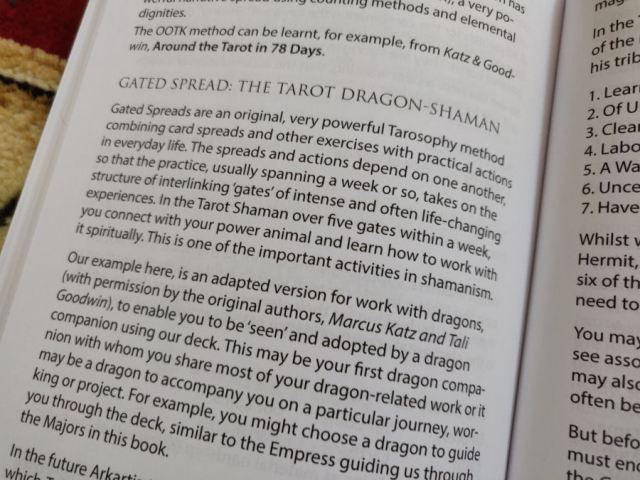 The book also shares more context and background about the Starlight Dragon Tarot. The deck is a balanced blend of the Rider-Waite-Smith, Thoth, and Tarot de Marseille, and so all three systems come together in Starlight Dragon.

About a dozen tarot spreads tailored specifically to the shape of the Starlight Dragon tarot cards is instructed before Engert closes with powerful modalities of tarot and ritual magic that calls upon the dragons. 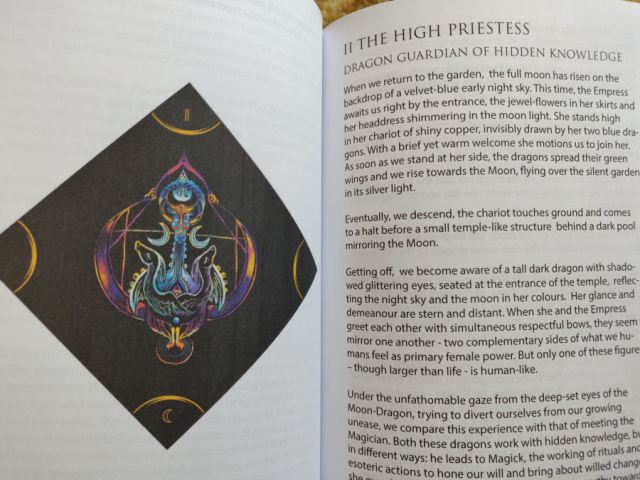 A wondrous, dream-like quality and a seamless patchwork of dragon mythology render Travelling with Starlight Dragons an enriching read. The book is charged with an old magic you feel in your bones as you take in the passages written by Engert, which read like dynamic incantations unto themselves.

No part of this book feels mundane. From the beautiful matte finish of the cover to the mesmerizing full-color images within, and an unassailable gift for creative writing that Engert possesses and shares with us all, Travelling is an exquisite and odic companion guidebook to what was already an exquisite odic tarot deck, Starlight Dragons. In both scope and depth, truly an epic work from Engert.

FTC Disclosure: In accordance with Title 16 of the U.S. Code of Federal Regulations Part 255, “Guides Concerning Use of Endorsements and Testimonials in Advertising,” I received Travelling with Starlight Dragon from the author for prospective review. Everything I’ve said here is sincere and accurately reflects my opinion of the book.