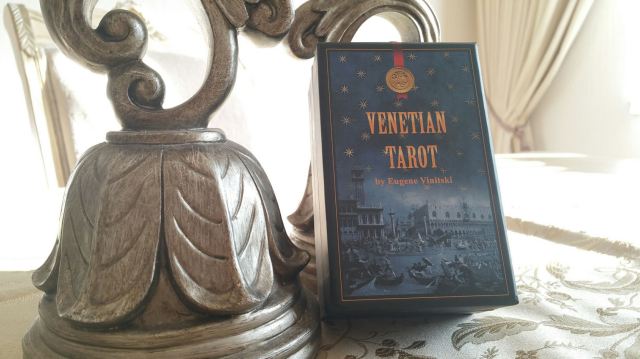 The Venetian Tarot by Eugene Vinitski is a self-published tarot deck that is magnificent for a variety of reasons. Art may be subjective, but I would be hard-pressed to find one person who does not acknowledge the exemplary skill level demonstrated here by Vinitski. Furthermore, there’s both an intuitive and psychological understanding of the human condition that truly gives the deck a transformative, transcendent quality. Vinitski has produced a tarot deck that’s at once beautiful and collection-worthy, yet also a great professional reading deck. 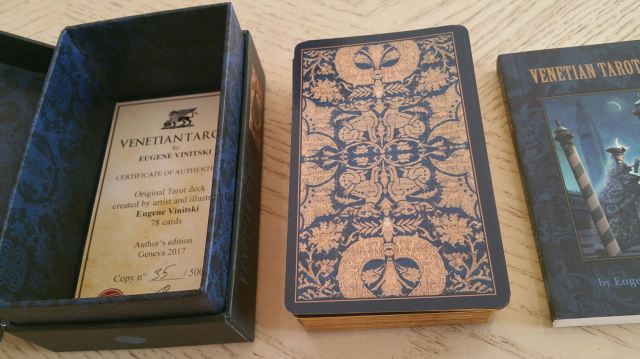 Let’s begin with the packaging and card back design. I love the sturdy box style that Vinitski has chosen, its matte finish, and the complementary companion guidebook. The blues and rose golds complement the tone for the card by card Carnevale di Venezia inspired narratives. Also, yes, the cards are gilded and stunning with reversible card back designs.

Vinitski is an artist and illustrator from Moscow who now lives and works in Switzerland. You’ve got to check out his portfolio of art, which you can find here. Before we talk about the deck, let’s talk about the artist. How people take photographs, I think, reveals a lot about them. There’s a sharpness to Vinitski’s photography that suggests a fine-tuned understanding of human psychology, which you see underscored in his paintings as well. Vinitski’s paintings (from his portfolio; we’ll talk about the artist’s point of view for the Venetian Tarot a little later) bear a strong interest in the human figure, depicting human emotion and interactions with a Post-Impressionist aesthetic.

That keen understanding of people and human predilections sets a fascinating stage for the creation of the Venetian Tarot, where the focal point is on Venetian masks, or the masks we wear as devices to conceal our identity, our social status, and to maintain our anonymity when we act in defiance to our normal characters.

You can click on the photographs in this post for a zoomed in close-up view of the cards. Like Vinitski’s photography style, there’s a sharpness to the imagery here, yet with the subdued color palette, a pensive atmosphere of mystery is evoked. So far among the Majors, there isn’t a single card image that I dislike. You’ve got the Rider-Waite-Smith structure with a well-defined Vinitski twist.

The guidebook reads like a storybook and I love that presentation of the tarot. You’ll see an excerpt from the entry for Key 18: The Moon in the above photograph. That first paragraph tells you the story of what you see happening in The Moon card. Then once you can fully visualize the scene in your mind’s eye, the guidebook unveils different ways to interpret that scene.

The Minors don’t have captions, which I really like. Plus, Vinitski has designed the cards so captions aren’t even needed. You’ve got the roman numerals up top and a symbol of the card suit at the bottom. Above, it’s pretty easy to pick out that this is the suit of Wands.

The pip cards may not prominently feature the exact number of wands, or cups, or swords, etc. in a Marseille-like manner, but the imagery is evocative of classic Rider-Waite-Smith symbolism and for the most part, will have the corresponding number of wands, cups, etc.

The dark black borders work for this deck, a nice artist’s finish to the overall layout of the cards. I love that a Venetian mask inspired tarot deck has been produced. I love what weaving the theme of Venetian masks and what they represent into the folds of tarot can do to the deck’s transformative value. There’s also something about the aesthetics of the Venetian Tarot that merits it as a really cool professional reader’s tarot deck.

Okay back into the guidebook. Here we see snapshots for the Five of Cups and Six of Cups. I want to show the detailing in thought that went into the imagery of each card. For instance, the Five of Cups depicts a Commedia dell’Arte from the Italian Renaissance, a theatrical comedy performed in masks.

The suit of Swords in the Venetian Tarot is one of my favorites. It’s so dramatic. I love the stagecrafting in each card, paired with the story told in each corresponding entry of the guidebook. 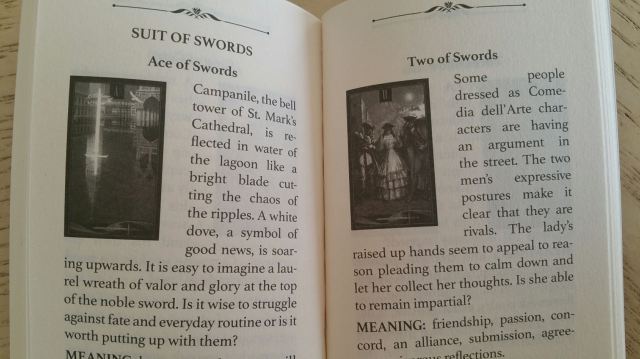 I love the nods to Venice, such as in the Ace of Swords, picturing Campanile at the St. Mark’s Cathedral. I love the story told to express the Two of Swords here. The card meanings provided are interesting, not what I’m used to necessarily, but work well given the totality of the system that is Vinitski’s Venetian Tarot.

The court card entries here also showcase what I’m talking about with the stories that Vinitski has conceived of for each card. The Knight of Swords, we are told, is a “gambler, bully and gallant” who is in the middle of a duel, so he’s got his sword out, but he’s also playing a game of cards, and yet he’s also rushing off to deliver a love letter to his paramour. That is such an intriguing depiction of the Knight of Swords.

Although works from Vinitski’s portfolio tend to be more Post-Impressionistic, his deck the Venetian Tarot is rendered in a High Renaissance style with the style’s iconic nod to classical humanism. If I had to define the style of the Venetian Tarot in one word, then I would say it’s humanistic.

Eugene Vinitski’s Venetian Tarot is a masterpiece. It is as functional as it is beautiful, which is a pairing that’s hard to find in tarot decks these days. Deck collectors will want this deck because every detail about how Vinitski has crafted the deck and its production value appeals to the deck collector. Professional tarot readers can consider it because it reads so well and is just one of those amazing decks that both reader and seeker can appreciate–you’re bound to get “oohs” and “ahhs” from clients when you fan out the cards from this deck. It’s, of course, also an effortless personal reading deck. Yes, truly one of my favorites.

You can order the Venetian Tarot here, via Etsy.

Although the deck may seem to come with a steep price tag, it is well worth every dollar of your investment in this rare collector’s item. The deck is made in Geneva, Switzerland (as opposed to, you know, I hate to say it, China). There are only 500 copies of the First Edition and you can absolutely tell where the money is going–the detailing, the quality, the luxury, oh my! So deck collectors: you need to act fast! If I may, with the fortune telling… I predict that in the future, your First Edition copy of the Venetian Tarot is going to be worth tenfold if not more what you’ve paid for it.

FTC Disclosure: In accordance with Title 16 of the U.S. Code of Federal Regulations Part 255, “Guides Concerning Use of Endorsements and Testimonials in Advertising,” I received The Venetian Tarot from the deck creator for prospective review. Everything I’ve said here is sincere and accurately reflects my opinion of the deck.

8 thoughts on “The Venetian Tarot by Eugene Vinitski”