At the end of my post on creating a fluffy tarot deck, I relayed that James has urged me to print and independently publish the Spirit Keeper’s Tarot, and we’ll be doing so in black and white. As of this posting, I’m about 25% regretful that I said yes.

After preliminary due diligence, I noted that the minimum order quantity for most playing card printer companies is 500 units. Okay, I think I can do 500 units. Sounds like a scary lot of copies but maybe with effort and more marketing balls than I have, I can move 500 units….

Here’s the only problem. Can I sell 1,000 copies? I don’t know if I want to risk it. I don’t want a wall of my own tarot decks taking up space in my house for the next decade.

So there’s the issue of how many copies to order for my first (and most likely only, because this is a labor of love, and I don’t want to get into the business of selling tarot decks) print run.

Then– and this is obvious, obviously, but the reality hits hard nonetheless– any added quality you want to the production value of your tarot deck is added cost. And it’s almost never a cost-effective add-on. There’s a reason mass publishers of decks have the lesser-than-the-indies quality they have– it’s to maintain a healthy profit margin. You want it in a box, you say? The cards should be a matte finish? Better cardstock? Gilded edges of any kind? What?–you say you want a ribbon in that box and a cut-out groove so that box is easy to open? All of this is extra cost.

If you pass the cost on to the consumer, your decks become expensive and you lose a lot of would-be purchasers on account of pricing bracket. If you eat the cost yourself, you’re really not making any money at all from a lot of work, and I do mean a lot. Ask anyone who has created and produced and is now trying to sell a tarot or oracle deck: it consumes their lives.

There’s also the reality that you can’t have it all. You want a matte finish? Well then you can’t have that pretty shiny gold gilt-edging. It’ll need to be matte. If you want a deck and book set, they want me to also produce this plastic insert tray thing, which I really don’t want. I hate those plastic insert tray things. They’re hideous and so bleh, especially in the presentation of a tarot deck. Then different types of book bindings have different pagination maximums that you need to think about. You can’t just willy nilly have any page-count for a book that you want.

By the way, to order a sample– yes to get a sample of your tarot deck from most manufacturers is around $250 to $300. That’s outrageous! You can print a copy of your deck from any run-of-the-mill print-on-demand website and it’s at most $40.

Why is it so pricy?

Lots of reasons, but there’s a pretty sad bottom line: a lot of Western deck creators say they want to place an order with these overseas manufacturers, order the sample, which used to be free or very budget-friendly and reasonably-priced, only to then renege and leave the overseas manufacturers hanging. They’ve expended a great deal of effort, time, and attention and all for nil. So actually, the outrageous sampling fees are due to Westerners changing their minds and stringing along the manufacturers for a ride. And now those of us honest deck creators have to pay for the assholeyness of the slimy deck creators that came before us. $250 to print a sample of your deck is fucking insane. Just to give you a comparison point, when I used to be a fashion designer, to get samples of your designed handbags and accessories was only about $40-$50 each, and that’s on the high end.

The guidebook is yet another issue. So right now, the word count for my guidebook is over 50,000 words and just shy of 300 pages at the 6″ x 9″ trade paperback size. I tried cutting and shaving it down to a 70-page stapled LWB (little white book) so that something could fit inside the box with the deck, but no. I just can’t. Instead we’ve got the Big Book and I need to figure out economical logistics for getting deck plus Big Book to purchasers. 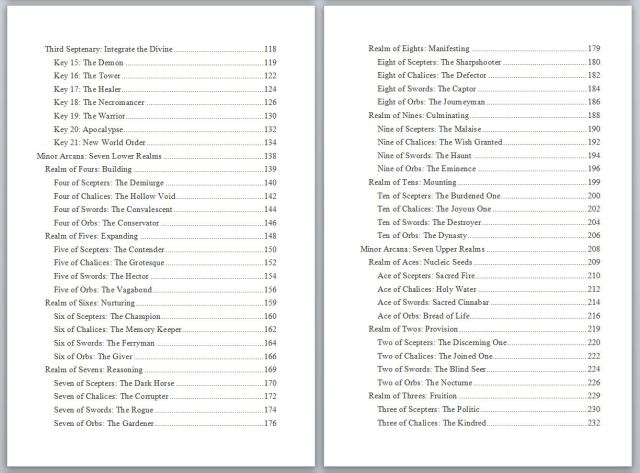 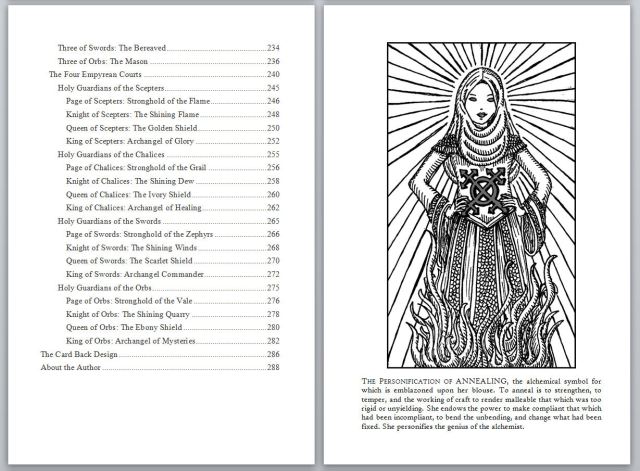 So the artist in me is pissed and frustrated because in my world view, everyone who has the deck needs to have the book, too. I want everyone with the deck to have the book. But James says the reality is the book is not worth the money or trouble it requires. He says I need to chop a small piece out of the Big Book and turn it into a 70-page teeny tiny Little White Book.

But I can’t. If you’ll believe my word, I did try. I just… Look. 70-pages to talk about 78 cards, assuming it’s totally okay to not include any introductory sections or the Celtic Cross (tarot readers LWB joke…), is just not enough space for me to get into what I did for each and every card design.

No matter how we do the math, independently publishing your own tarot deck is a labor of love. Economists would even call it a huge financial loss, because all the time you put into this venture, you could be putting that time elsewhere and earning a shit ton more money. So that’s income and opportunity lost all because you’re busy printing and publishing your own tarot deck.

As the artist, there are all these features and details I want when it comes to the quality of the deck. As the business guy, James is trying to initiate me into the hard-hitting reality. And the numbers he’s crunching isn’t even toward making profit– it’s toward making sure we break even!

In terms of progress update, right now I’m proofreading the book and doing the digital final touches to the card images to make sure they look polished and professional after printing. You may (or may not) notice that there are substantial changes made between the photos of the drawings I shared previously and this final draft of cards.

In many instances, I decided I didn’t like how something looked, like maybe a face or the tilt of a sword, but I like everything else about the card. So what I did was, um, digitally behead the figure in the card so it was blank, printed out that card in high-res, then drew in a new head, and scanned in the revised card.

To add a greater variety of shading, given that this is a black and white deck, I hand-drew many different seamless tile designs, scanned those in, and then digitally applied the seamless tile as a “wallpaper” effect to the blank space I wanted to fill in.

There were other logistical challenges I faced due to not having foresight or adequate planning. I didn’t start this project with any intent of publishing the deck, so I drew the cards in a way that would have made them easy to cut out into actual cards.

Each drawing was actual card size. Had I intended on printing and publishing this deck for reals, I wouldn’t have done that.

Second, because I was going to cut them out to make a tarot deck of original drawings, I linked the cards together, three to a single sheet of paper. That way when it came time to cut, I only had to cut one line for every two cards– if that makes any sense. Whereas if each had been separately done, I’d have to cut four times for every card. It seemed clever at the time when I was just creating one deck.

But when it came time to scan in the images and then crop each down to same exact size, exact down to the pixel, this turned into a digital adventure.

Nonetheless, with some top-of-the-line tech, we’re getting really high-res scans, which sadly I should have thought to get access to when I offered the free Majors. Unfortunately, the image files for the Majors that you can download for free are lower-res and don’t print very high quality cards. With the full deck we’re producing, each card image is 1200 dpi….which means it has taken an inordinate amount of time to digitize. =) But my hope is the efforts will be all worth it. 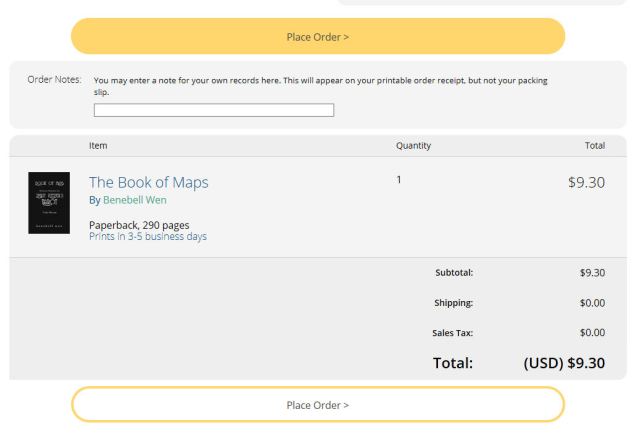 Look! If I offer the formatted digital files for the guidebook and just have everyone print out their own copy via Lulu.com, it will cost them a total of $9.30. If you’re lucky and snag a coupon code like I did in the above screen shot, it’s with free shipping anywhere in the U.S.! If I print and produce my own physical copy of the book to sell, I cannot compete with that price point. It’s insane.

Maybe offering the digital files to the guidebook and having each person print their own copy of the book is the way to go. =/

Read more entries from the

documenting the production of

19 thoughts on “So It Begins: The Artist vs. Business Reality”