My earliest memory of a psychic reading was in Taiwan with a nun at a monastery that my aunt, who is a nun, resided at. (Do I still refer to her as my aunt if she’s now a nun? I have no idea…) When you’re an Asian kid, grown-ups, especially grown-ups of the holy variety, don’t have names. They only have titles. So in Chinese, since we only spoke to her in Chinese, she was Shi Fu, or Teacher, and in English, privately amongst ourselves, she was The Psychic Nun. The aunt who is a nun is Auntie Nun. Auntie Nun is a little bit psychic while The Psychic Nun was full-on knew-your-past-life and knew-your-future psychic plus could-speak-to-the-dead so also medium. The Psychic Nun is referred to in the past tense because she’s no longer with us. I heard of her passing a few years after my maternal grandmother’s passing. It’s okay. She was like a billion years old already anyway and with all that good karma, is off to somewhere awesome.

Anyway, that introduction was way off-track from the subject matter of this post. This post is about go-to knick knacks in a tarot or divinatory reading space. I’m not asking about what you need to get your read on (because inevitably some holier-than-thou advanced tarot reader master will pipe up and say, “I don’t need anything but the power of my mind… I am not bound to materialism… toot toot“)–right, right, we all know that. But I’m asking what kind of knick knacks do you like in your reading space. I don’t need a pink toothbrush for effective dental hygiene but I like it when my toothbrush is pink, so I have a pink toothbrush. Get it?

Back to why I opened with the Psychic Nun. That first memory of a psychic reading with said Psychic Nun, in her long brown robes, bald head, coke bottle glasses, and a stone that she’d move round and round in her hand while she spoke (an Old World fidget spinner?) is probably why when I started divinatory work myself, I in effect copied her and now also like to keep a stone or crystal nearby.

That stone or crystal serves as a personal cintamani stone, something I talk about and explain in my Tarot as a Tool for Craft online course. (Psst… by the way, it’s a $15 course where you get all files for life, so if you haven’t taken the class already, consider it.)

When I’m reading on location, meaning it’s away from home and it’s not my site to spruce up, like I’m being invited somewhere to read, then I keep it low-key. I’ll bring my cards tucked into a tarot bag with a selenite palm stone plus some pretty rocks here and there, both for ornamentation and practical purposes. The practical comes in when I’m reading outdoors. I’ll use the stones to anchor down the cards if there’s wind.

When I have a whole table to myself, I might get a bit more fancy, with many gemstones and crystals mainly for ornamentation, maybe a few figurines to set the mood, and I may or may not bring a reading cloth. The reading cloth part is a total “it depends.” Sometimes you’ll find me reading with one; sometimes you won’t.

A working candle isn’t part of the knick knacks but does always seem to be loitering close by when I am reading at home. To start off a day of readings, I’ll light the candle and do a little, you know, whatever it is that we like to do to make ourselves feel better, then snuff the candle and let the smoke waft around the room as I prep the cards.

“Prepping the cards” just means giving them a doozy shuffle and “cleansing” them in a sense. It’s just to really make sure no two cards that were together side by side from a previous reading will be now side by side in the readings to come. You know, get it super duper randomized.

Weirdly, I don’t have or feel called to keep nearby knick knacks for astrology readings. It’s just the chart or charts and me doing a whole lot of talking. At most I’ll have a quartz crystal single terminated point close by.

Often these days in-person birth chart or synastry readings are impromptu, mainly from guests visiting us who then ask for a reading. This can be a bit of a nuisance, I admit, but I almost always accommodate our friends and family, whether it’s third cousins ten thousand times removed who’ve swung by because they need a place to stay for the weekend, an old college buddy, or friend of a good friend with a daughter who has a problem who heard “I’m good at this sort of thing.”

In those cases, what I do is grab my laptop, where my professional astrology software program is installed on, boot it up, input the birth details, create the chart digitally, and then read the chart off the laptop screen.

Let’s talk about the I Ching. In China you often see old ladies or old men on the streets peddling I Ching readings. I’ve only ever seen the coin toss method and not the yarrow stalk, which I speculate is for efficiency reasons. It’s probably not business-efficient to be doing the yarrow stalk method of I Ching readings on passersby in the streets.

This one old lady from recallable memory would shout into the crowd. Are you looking for love? How can you make more money? She’d say she could use the I Ching to tell your future for the bargain price of 30 yuan. That’s about 5 U.S. dollars. You’d squat by her side and she’d make this extravagant show of touching your head and calling out to the gods. Then she’d toss the coins herself– you don’t get to touch them– and construct the hexagrams. Then she’d look them up in a book older and more worn than her, and read it aloud to you, interpreting into layman’s terms as she went along.

From your perspective, it’d sound something like this: “Three dragons flying in the east two drum beats and a wagon wheel… That means you are going to marry a rich man in three years’ time.”

Um…how the what and huh? 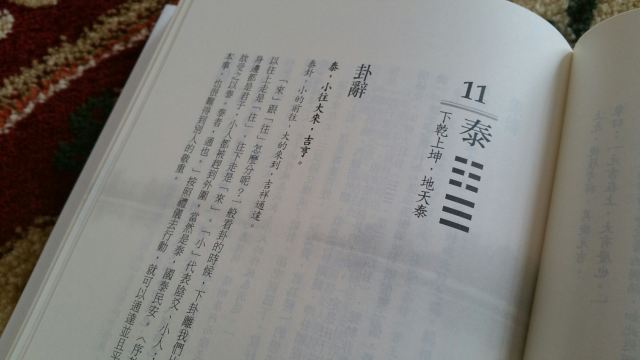 Okay, obviously I made that up. That’s not in the I Ching.

But that’s exactly how the I Ching readings would sound to you. First a bunch of riddles and then a conclusion that no part of your senses can reasonably tie back to the riddles.

And don’t you even dare ask for clarification, or you’d get her wrath. It’s a take it or leave it type of fortune telling mentality over there in the East.

No, that’s not true. If you whipped out more money and waved it in front of her face, then you could ask follow-up questions. Sometimes she’d pull two moon blocks from her back pocket to answer your yes or no inquiries.

For my I Ching readings, I use either the three coins or rice grains method, depending on who’s asking and how much time we’ve got. Oh– and if you’re, like, what’s the rice grains method, I’ll be teaching it in my I Ching course, something I’ll be rolling out in the near future. (Psst… it includes my personal translations and annotations to the I Ching Book of Changes plus loads of I Ching goodies! You won’t want to miss out, so stay tuned.)

By the way, the little spiral-bound notepad that says “Client Reading List” is something I keep close by on the reading table. In addition to the formal record-keeping and accounting, I’ll jot down notes into that notepad and that’s what I’ll rely on during the readings. When doing I Ching castings for folks, I’ll log the results in that notepad.

So talk to me. What are your go-to knick knacks in a reading space? Share all! Then link your post or video in the comments below. Or show and tell via social media and tag me so I’ll see.