Imagine a written book that captures the spirit and the style of your best friend, who happens to be a psychic and damn good tarot reader, agreeing to sit down with you at your kitchen table to teach you tarot. That best friend is straight with you, cuts to the chase with no meandering explanatory treatise, and is both encouraging and entertaining.

That’s Kitchen Table Tarot by Melissa Cynova. The book is 288 pages, portable, a book you’ll want to take with you on the go, and forecasted to be Llewellyn Publications’ next big star. 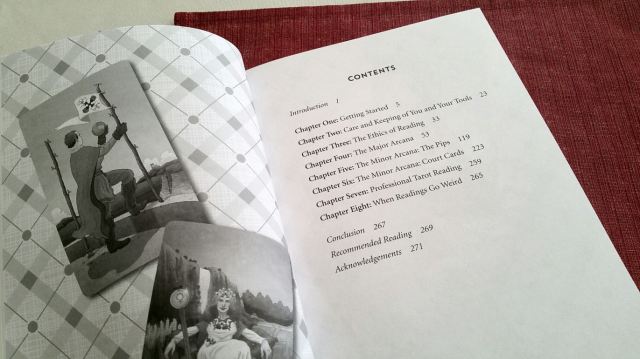 I love the content organization. Cynova presumes you don’t know the top of the deck from the bottom and starts there, guiding you every step of the way. Right from the beginning she addresses many of the common misconceptions and answers the frequently asked questions that tarot novices have. 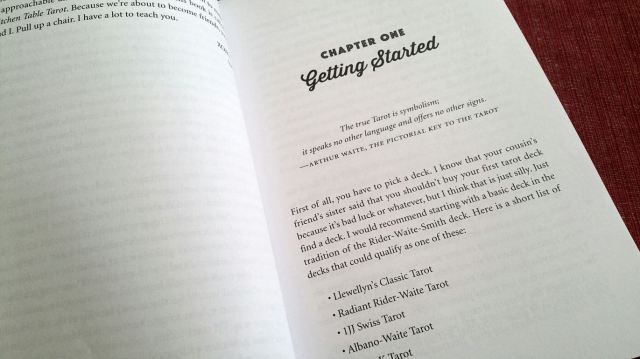 The tone of the book is conversational, casual, fun to read, and keeps a smile on your face page after page. Cynova’s quirky, wry, punchy humor shines through. It’s an engaging read. Although page pictured above shows a list of RWS-style decks she recommends, she also offers a list of diverse decks, such as the Gaian Tarot, Modern Spellcaster’s Tarot, the New Orleans Voodoo Tarot, etc.

I find that one way I personally distinguish a tarot book with more modern sensibilities from one who accounts for tradition is the treatment of the Celtic Cross. After the one-card reading, the introductory spread in this book would be the classic Celtic Cross. 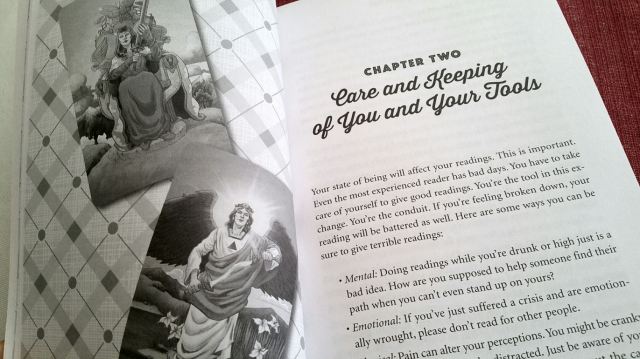 Step by step, you walk through various exercises that build on the skills that previous exercises trained you on. This is a book you will want to read cover to cover, and tuck in your handbag or backpack to take with you so you can read on the train, read on the bus, and read in waiting rooms. 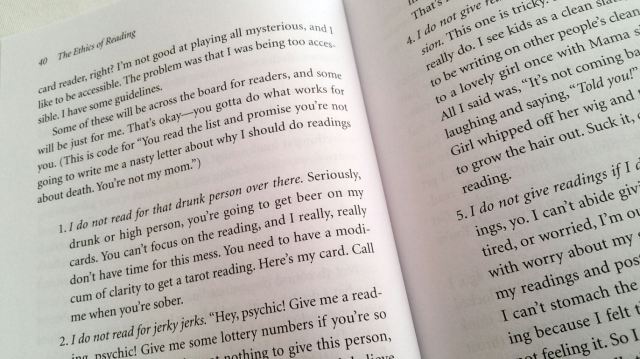 Under “The Ethics of Reading,” I appreciate how number 1 on the list is the recommendation to not read for drunk people. I learned that the hard way. A noticeably drunk man once sat down for a reading when I was reading at a cocktail reception and right away I got nervous, watching the wine in his glass swish around the rim. However, I kept my nervousness to myself, forced a smile, started shuffling, and proceeded with the reading. Less than five minutes into the reading, his own hand knocked over his wine glass and red wine spilled all over one of my favorite go-to tarot decks. And he was way too drunk to even be apologetic! So, tarot readers, listen up. Heed Melissa’s advice!

Starting each number, Cynova gives you some overarching numerological correspondences. She draws patterns for you and helps you see the interplay of relationships between the cards.

Both upright and reversed card meanings are provided. The way Cynova writes makes card meanings memorable. Take, for instance, the Strength card. “Although the lion has the boldest and most terrifying reputation, the woman is the strong one in this picture. She may as well name the lion Fluffy and put a pink sweater on it.”

Or in the Eight of Wands– “I think of the Bible story about casting seeds on the ground. Some will grow, some will burn in the sun, some will be eaten by birds, and some will fall into the rocks. But listen–some will grow. Isn’t that worth it?”

Toward the end she has a chapter on professional tarot with great insights for those who do decide to take their tarot practice to the next level and go pro. What I love is how personal the book is. Cynova shares accounts of memorable professional readings she’s done and offers her insights as she’s learned them. You gain in knowledge through her experiences.

Kitchen Table Tarot is an engaging initiation into the world of tarot reading. This book and any one of the tarot decks she recommends in the beginning chapter would make a great gift set for any spirituality-leaning friend.

As some of you may know, I take in-person readings from vetted folks at my home and when they come in groups, I have a den that I’ve converted into a waiting room. Kitchen Table Tarot is in that waiting room for folks to read. They love it! Close by is a Rider-Waite-Smith tarot deck that they can thumb through alongside Melissa’s book.

Without my prompting or hinting, one client recently praised the book and said she loves how easy-to-read it is, and how accessible the information is. She jotted down the book title, remarked about how she was going to buy the book for herself and a deck of tarot cards, and then was on her way. Who knows where that road is going to lead! I’m excited about the possibilities for her! =)

Who would I recommend this book for? Someone who wants to learn tarot, is currently at the beginner level, and kind of zones out or falls asleep reading any of the other tarot books out there. Yeah, I acknowledge it, most of our tarot books are pretty dry. That’s where Melissa Cynova’s book comes in. This was not dry at all. Her writing style is funny, light, and she’s just like your best friend sitting across your kitchen table from you, conversing with you about tarot. It’s that good.