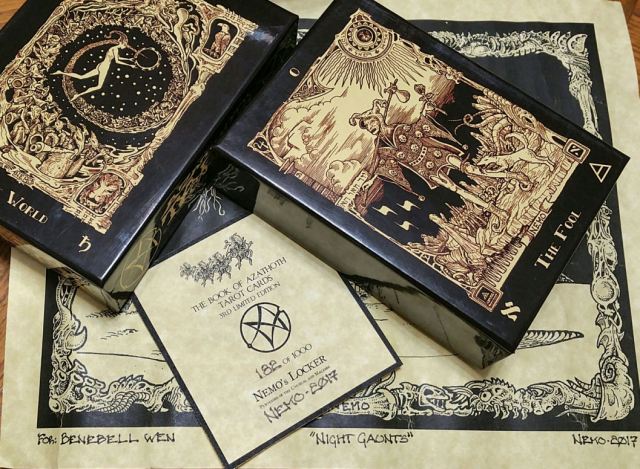 Imagine Keziah Mason, a Salem witch in the 17th century per Lovecraftian imagination, and the tarot deck she would have used for divination. The 2016 self-published Book of Azathoth Tarot is one imagining of what that deck might have looked like. Azathoth is a deity from the Cthulhu pantheon invented by H. P. Lovecraft in his fiction works. 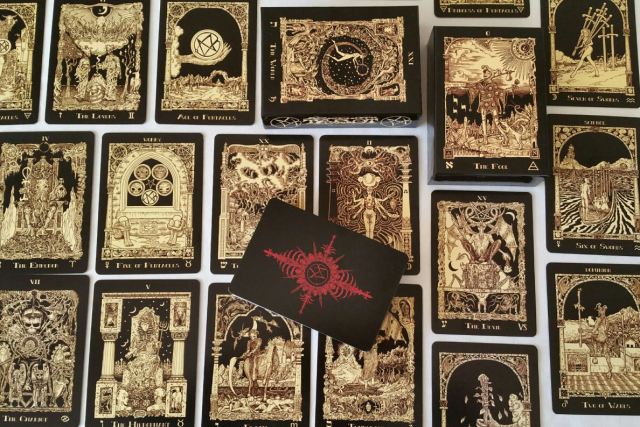 Although largely unknown and unrecognized during his lifetime, H. P. Lovecraft was a prolific writer of horror, fantasy, and science fiction. A driving theme through many of his works was the theme of esoteric knowledge, hidden, dark truths that only the few and the audacious can uncover. And so his fictional world is a perfect setting for the imagination of a tarot deck.

The Book of Azathoth Tarot is the work of an incredible artist who goes by the name Nemo. You can order your copy of the Third Edition here.

The deck is larger than the typical trade size for tarot decks. It comes in a sturdy box for storage with beautiful imagery from the Major Arcana– The Fool on the back side and The World on the front.

I confess not being a huge fan of the red silhouette for the card backs paired with the yellow silhouettes for the card images. I felt it would have been easier on the eyes for all of the silhouettes to match in color, but that’s just me.

Packaging is exemplary. I ooh-ed and ah-ed for sure. Earlier in the first photograph of this post, you see a personalized print that comes with your order. I love it. Hubby loves the art, too. I’m thinking of framing it and keeping it near my study desk.

The deck structure follows the English Tarot system, or more specifically, Rider-Waite-Smith, and the illustrations remain close to RWS symbolism, rendering this deck really easy to read with for any RWS reader. The Majors, as you can see in the above photograph, feature the Golden Dawn attributions, i.e., elementals, planetary, or zodiac, along with the corresponding Hebrew letter.

I love the lower chakra vibes of this deck, resonating with and stimulating from the root to the solar plexus chakras when working with the Azathoth. The deck is well-versed and best equipped for you to work with your personal power and your command over lower vibrational realms, but hey, that’s just my opinion. Who knows what the deck creator’s intent was or how you make of the deck, but what I have loved about the Azathoth is how it’s helped me tap into the more primal, emotional facet of myself. For reasons I can’t readily explain, it’s also been high conducive for mediumship work or channeling, if that’s your thing.

When I opened the new deck from its plastic wrap, the cards were ordered beginning with the suit of Pentacles, which I found interesting, given what I just said about the cards being more tuned in to the lower chakras and more primal or material world energies.

Here you see strong influences from Rider-Waite-Smith imagery, even in the depiction of the court cards. So it will be an easy deck for any RWS reader to work with fluently. Yet note the card titles in the courts here–the court cards are fashioned after the Thoth.

Many of the depictions here call to mind figures from the Cthulhu mythos envisioned by Lovecraft, which I love. I haven’t read Lovecraft since high school, but was way into his writings back then. Working with this deck has motivated me to delve back into his stories again. Also, even though the imagery in the Minors are definitively RWS based, the essential nature of the deck’s aesthetics and the overall vibes the Azathoth conveys is definitively Thoth. I found that interesting. 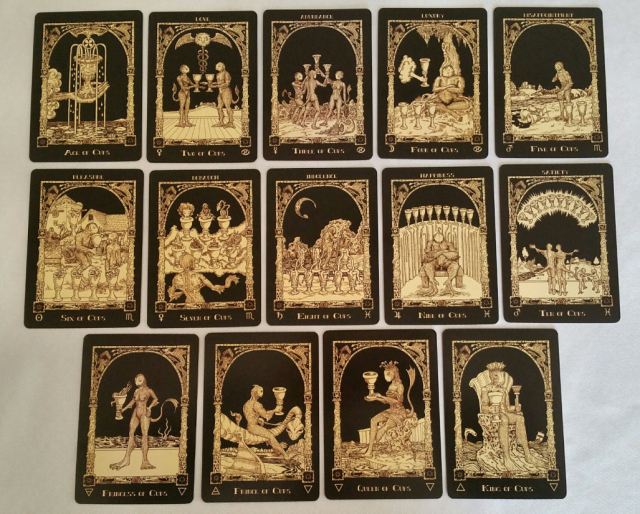 The suit of Cups seems to pay homage to Lovecraft’s short story “The Nameless City” (1921), about an ancient civilization of humanoid reptiles, or perhaps these figures are depictions of the lizard men on the planet Venus in “In the Walls of Eryx” (1939).

Also, those bothered by the white-washing of people depictions on tarot will work happily with this deck, since race is ambiguous and if you want diversity, you’ve certainly got diversity…diversity of fictional species.

These figures from the suit of Pentacles might be the artist’s conceptualization of the unnamable beast in “The Unnamable” (1925) about a horned, hooved figure that haunts the protagonists. I love the sketch for the borders and then the additional black border. Use of negative space by the artist Nemo is brilliant.

I also appreciate the well-thought through symbolism here, such as the alchemical magic square in The Magus, depiction of the fixed signs in the Wheel of Fortune, and the iconic many-armed dark goddess for The High Priestess.

The detailing of the illustrations is incredible. Look at the above Wheel of Fortune card. You’ve got the alchemical symbols inscribed in the inner wheel like in the RWS, and then the astrological zodiac wheel for the outer circle. Then along the four corners corresponding with where the signs are located on the wheel, you see symbolism for the four fixed signs, Taurus, Leo, Scorpio, and Aquarius.

If you’re a fan of Lovecraft’s works, then you’ll want this deck. Even if you’re not and you know nothing about the Cthulhu, that’s totally okay. You will still yield incredible divinatory and occult mileage from the Azathoth as an esoteric tarot deck. There is so much richness in the detailing and symbolism for yo uto pore over. See The Sun card below, again bringing in the zodiac wheel around the sun and the alchemical symbols for the four elements. 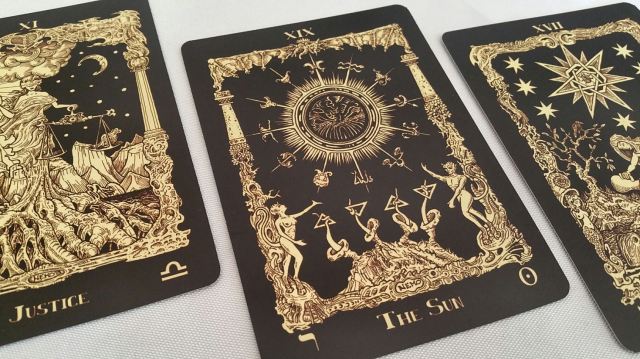 One minor gripe from me: I’m not a big fan of deck creators who feel compelled to affix their signature on every card. I know it’s a thing, trust me, I know, it’s quite customary for deck creators to do that, the precedent set by if not dating well before Pamela Colman Smith on the RWS. Again, for me personally, it’s not my thing. In the above photo you’ll see what I mean by the artist’s signature inscribed into the cards.

The Book of Azathoth Tarot is going to my personal working deck for 2017. I’ve taken to it effortlessly. I knew I’d be into it the moment images of the cards started rolling out and I was browsing the deck’s initial marketing materials. The actual product did not disappoint at al and in fact, exceeded those already sky-high expectations. I received my copy of the Azathoth as a gift from a dear friend, so my copy holds even more meaning to me and is just chock full of awesome energy.

7 thoughts on “Book of Azathoth Tarot by Nemo”