After Holistic Tarot, I went to work on a book about feng shui. One of the chapters covered feng shui cures, and a common feng shui cure used in East Asian households is the Fu talisman. Growing up in the Western world, I’ve always laughed a little at the Fu talisman. It’s treated like a panacea. Bad feng shui? No problem– Fu talisman. Need a promotion at work? Fu talisman. No luck in finding love? Fu talisman. Weight loss? Yep, Fu talisman. And, of course, there’s also the fantastical–exorcisms and conjurings. How do you summon a demon, repel a hungry ghost, or invoke a tree spirit? Well, the same way you find love or lose weight, silly– a Fu talisman.

Needless to say, I’ve come to realize that’s not quite the right characterization of the Fu. Those would be, yep you’ve guessed it, common mainstream misconceptions of esoteric Taoist practices. In fact, the more I delved into the Fu, the more these centuries-old texts satiated my inner nerd. Not only were the alchemists and ceremonial magicians that thrived thousands of years ago deliberate, precise, detail-oriented, and thorough, much of it resonates closer to modern science than one might presume, though the vocabulary has changed. In The Tao of Craft, many of the end notes cover these parallels. The deeper I went down the rabbit hole of historic research (and experiential practice), the prouder I felt about being who I was, descending from the lines I descend from, and feeling a genuine affinity for my heritage. 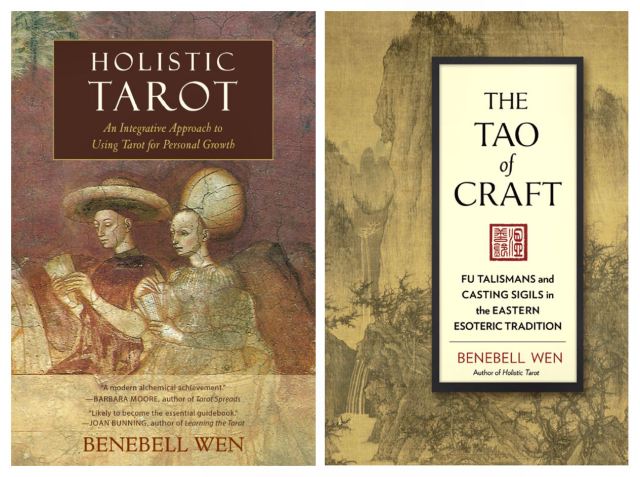 It’s interesting how I got into tarot in the first place. It was my essential love of exploring the occult but disdain for the forms of occult from my own culture. I grew up in a household that provided ample avenues for metaphysical and spiritual exploration, but none of it interested me (at that time) the way the tarot beckoned to me. So I fell into Western esoteric practices and tarot became my thing.

When I wrote Holistic Tarot, I was not yet at a place mentally where I felt comfortable being transparent about my personal metaphysical practices, and I devoted an excessive deal of effort framing tarot in a way that the public consciousness might be more equipped for handling, justifying tarot through analytical reasoning, to convince you that tarot is something that makes sense on a rational plane. Yet I had hoped one who was incisive and sensitive could pierce through the smoke and mirrors and see where I really stood. I do think some folks caught on.

The Tao of Craft was born from a different place. I’ve talked about how I came to write Tao of Craft before when I announced the coming of my second book here. There was significant reluctance about whether to publish this book, but, as you can see, the final verdict I reached for myself was yay, let’s do this. Cross our fingers [and mark out a good hiding spot just in case it all goes to shit…] and let’s do this.

Today is the day my second book is released. The Tao of Craft is in stores now, and available for purchase. If you haven’t ordered your copy already, please do. On a kind of funny-crazy-synchronistic note, today the sun is in Libra and the moon in Leo, which mirrors my personal sun and moon signs (I’m a sun Libra, moon Leo). It’s also the dark of the moon, a waning crescent, just as the moon phase was when I was born. What’s more, right now Venus is in Scorpio and my natal Venus sign is Scorpio. White moon Selena, also, has returned to my natal sign Aries. Much of the transit astrology for today is about personal, spiritual, and cultural returns, and in so many ways, the writing of The Tao of Craft for me was just that. Finally, given that this is a book launch, I’m hoping that Mercury in Virgo will be auspicious.

Above all, thank you, thank you all, for your incredible support through the years.

19 thoughts on “The Tao of Craft: In Stores Now”