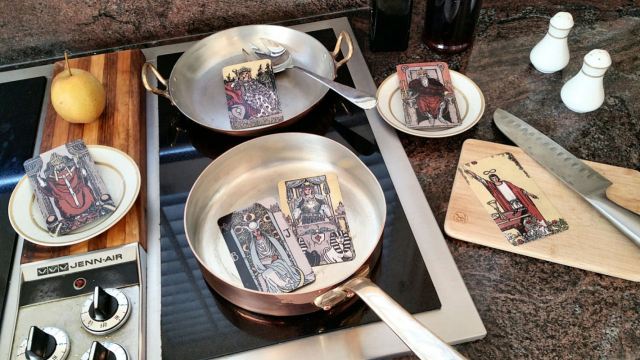 I’m thrilled to be participating in the “Foodies Guide to the Tarot” BlogHop hosted by our co-wranglers Jay Cassels and Arwen Lynch Poe. The topic was left wide open for us bloggers to go in any direction of our pleasure, as long as it had to do with tarot and it had to do with food. I’m thinking I’ve done just that.

Inspired by the First Septenary, I will be preparing a seven course brunch for Hubby and me. (Jay and Arwen: the hubby thanks you for your BlogHop topic idea). Here we go. 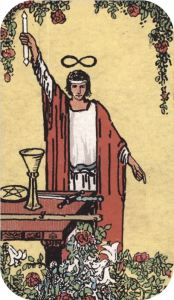 Key I: The Magician | Breakfast Quiche

In my mind, to represent The Magician through food, you’d have to dabble a bit in alchemical cooking. Easiest brunch dish to work on for combining the four elements would be a quiche, so I’m working with a breakfast quiche here. The Magician is also about taking various elements, bringing them together and by the power of the magus, or alchemist, manifesting a sum greater than its parts.

In food terms, that’s making a quiche. These mini-quiches are paired with crème brulee coffee, because coffee is magical.

Then what goes into the quiche needs to correspond with the four elements, Fire, Water, Air, and Earth. For the main ingredients, I ended up going with tomatoes (and onions) for Fire, broccoli for Water, cheese for Air, and corn for Earth. (Tomatoes seem to correspond with either Fire or Water, depending on who you talk to. Here, I’m going to go with Fire. And even if that doesn’t work, I put onions in here as well, and onions go with Fire.) For herbs and seasoning, cayenne for Fire, parsley for Water, sage for Air, and salt for Earth.

Sometimes I’ll make my own pie crust from scratch, but for this, I did not. I went with pre-made frozen mini phyllo cups. They were perfect for this recipe.

Cook each veggie thoroughly first, then layer into the mini phyllo cups, alternating with sprinkles of queso cheese. Fill up nooks and crannies with beaten egg and herbs. Sprinkle with more cheese. Lightly spray top with more butter. Bake until the cheesy top is golden brown and bubbly. Finish off with smoked paprika and ground black pepper.

We’re still early in the fool’s journey and thus in the nascent stages of personal development, so the eggs that go into making brioche (aka French toast) seems to fit. The medallion shape of the brioche calls to mind the moon correspondence of the High Priestess. To call upon Water, we have a sparkling Asian Pear Riesling spritzer. Also, the slices of Asian pears in the course remind me of a crescent moon, again back to the moon correspondence.

I used a cup to create the circular cutouts of the bread. Dip in beaten eggs, brown sugar, nutmeg, cinnamon, and a pinch of salt. Pan-fry. Drizzle with maple syrup. For the potatoes, cut into thin slices, coat lightly with oil, do not salt yet (otherwise unwanted water will come out and you’ll get steamed potatoes and miss out on the crisp), and arrange on baking sheet. Broil. When begin to turn  golden, sprinkle with shredded queso and now salt and season to taste. Spritzer is just the pear slices, Riesling, and club soda. I have a carbonation machine at home so I actually made my own club soda. The Asian pears are homegrown in our backyard.

Can we please pretend the strawberry compote is pomegranate? Unfortunately my pomegranate tree isn’t ripe yet, so I couldn’t make pomegranate compote, which is what I had wanted to do for this course, representing the Empress.

I went with the parfait for The Empress. The yogurt comes from milk, which represents nurture. That seemed Empress-y to me. The granola and rolled outs calls to mind harvest and is linked to the grains symbolism on the RWS Empress. Then pretend that the strawberry compote is pomegranate compote for fertility and also to link to the pomegranate imagery on the RWS Empress’s dress. There was also something Venus-y about the bowl-ish shape in the course plating.

For homemade granola: rolled oats, finely chopped nuts, and brown sugar toffee. For the compote, I used frozen organic strawberries. Defrost in sugar until syrupy. Cook down strawberries and sugar with some lemon zest, lemon juice, and vanilla. If you want a smooth sauce-like texture, blend. I like it chunky with the pieces of real fruit, so I mash slightly with a fork and then leave as is. Finally, layer it up– granola, yogurt, then fruit, and repeat until you reach the top. 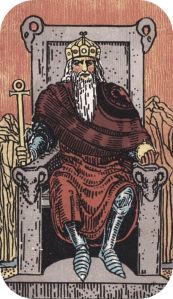 I’m gonna get a bit braggy for a moment and assert that this is, like, the best tomato basil soup you’ll ever have. And it’s vegetarian friendly (most recipes call for chicken broth).

Basil corresponds metaphysically with the element Fire, which is the essence of The Emperor card in tarot. The red color symbolism of tomato also calls to mind the color symbolism in The Emperor. Broiling the cheesy garlic toast that tops the tomato basil soup is an intense shot of Fire energy, inspired by the elemental dignities of Key IV. This soup also has a spicy kick to it, and I topped the toast with cayenne, so we’ve got quite a bit of Fire evoked here.

Onions, garlic, rutabaga, asparagus stems, carrots, celery, green onion, and bay leaf go into making a vegetable stock. Then poach the tomatoes in that vegetable stock before removing all those items. Fish out the tomatoes and peel. Drain stock. In stock, boil half an onion, carrots, and garlic in stock until vegetables are soft. Add the peeled tomatoes, finely chopped basil, chili powder, smoked paprika, cayenne, and tomato paste. Puree it all. Season to taste. I like to add a dash of hot sauce at the end. I like my tomato basil soup a bit spicy. I then cut out a circle from regular bread, coated it roasted garlic, then a thick layer of queso cheese, smoked paprika and cayenne, then broil until the cheese bubbles and turns golden. Top soup with the cheesy garlic toast. 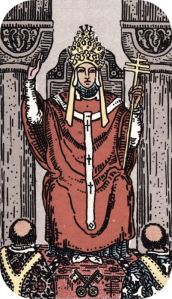 The Hierophant is also an earthy card, and what’s earthier than sweet potato mash to go with the roast beef. Finally, the cross of grilled asparagus calls to mind the Keys of St. Peter. (Yes? No? Maybe?…Hey, I’m trying here.)

If you haven’t sous-vide meat before and you love food, oh boy do I have something awesome for you to try and learn. Here I’ve sous-vide a cheap cut of round for 43 hours and the result is something that tastes like buttery prime rib that’s heaven to the taste buds.

Plus, the sous-vide produces an incredible au jus sauce for dipping. For the sweet potato mash, I roasted the sweet potatoes until soft, peeled, then mashed it in with butter, heavy cream, and seasoned it to taste. 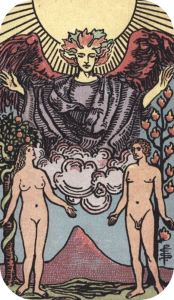 I went with apple to correspond with Air, and also the apple association with Adam and Eve. It’s shaped like a rose for love, you know, the lovers? ;-D Admittedly, I’m applying a rather superficial interpretation of The Lovers card just to suit my brunch menu. Then the two fresh strawberries arranged in that manner kind of look like two lovers. No? Yes?

Salted caramel sauce is decadent and if you ask me, represents passion and temptation perfectly. In metaphysical correspondences, almonds represent love, romantic attraction, and sensuality. Almonds also correspond with the element Air. The Lovers card is associated with the zodiac sign Gemini, and Geminis are good money-makers. Almonds also represent financial prosperity, so I thought it would be nice to incorporate almonds into this course. And then there are the two identical strawberry halves that call to mind twins.

I paired this dessert course with plum cordial. I made this plum cordial from homegrown plums this past summer. Hubby and I both love this cordial. He loves it because it’s strong and has quite the kick. I love it because it’s fruity and sweet. The plum cordial was a great pairing with the baked apple rose and salted caramel sauce.

The baked apple roses recipes have been trending in the food blogging world for some time now. Core an apple and cut it in half. Then cut into paper thin slices. Coat with lemon juice, butter, vanilla, and a combination of brown sugar, white sugar, and cinnamon. Cook it until softened.

Then make pastry dough. The key to the best pastry dough is to not give a shit about fat or calories. As long as you can do that, you can make an amazing pastry dough. Cold butter, shortening, eggs, sugar, vanilla, flour sifted with baking powder, a splash of heavy cream, and once the dough comes together, refrigerate for at least 30 minutes.

Line up the half-moon slices side by side, just overlapping slightly, halfway down a strip of pastry dough. Fold the bottom half of the dough up to seal, then roll into a rose, place in a muffin tin, and bake. I then garnished with salted caramel sauce, which I made from scratch. Heat up white sugar until it’s all been melted, add in butter tab by tab, then the heavy cream, then vanilla, and then salt to taste. Here I used French grey sea salt. 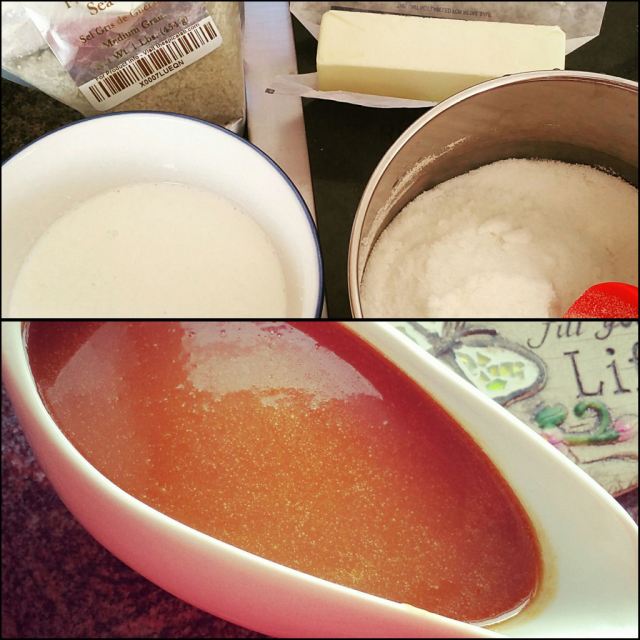 There’s something quite romantic about plum cordial, I think, so I thought it’d pair well with the apple rose for The Lovers card. It’s quite the process to make the cordial. These were made from homegrown plums (we had an abundance earlier this summer) and took about two months.

Oh, the almonds were also homegrown, but not by me, by my aunt.

The flaming chariot! Do you kind of see it below? You know, the salted caramel kind of makes the “chariot” (blondie and fresh kiwi slices…) look like it’s in flames? You kinda get the Water energy from the salted caramel sauce. Sorta. The blondie looks kind of like a chariot and then the kiwi slices are the wheels. Do you sorta see it? =)

For the blondie, wet ingredients: brown sugar, butter, eggs, and vanilla; dry ingredients: flour sifted with a pinch of baking powder and a pinch of salt. Combine, toss in toasted almonds, and swirl salted caramel.

Yes, both dessert courses include salted caramel because I made too much. Salted caramel sauce: a shit ton of white sugar melted down, then add in a shit ton of butter, a dash of vanilla extract, and French grey sea salt. Then slowly whisk in heavy cream until smooth.

I made these dishes on two separate days, so one day I made four of the seven courses and the other, three, even though here I say the seven courses are supposed to be served for a single brunch. It’s been hectic and busy around here, so I haven’t had a large enough window of time on a weekend to make a seven course brunch. But as long as you’re not gearing up for a book launch, working overtime for the day job, and trying to stay on top of your ongoing tarot and astrology reading requests, this seven course brunch is doable in one morning.

23 thoughts on “Tarot BlogHop: Tarot and a Seven Course Brunch”