The Resonance Oracle by Dara Caplan is a deck of 40 cards, 40 exquisite works of art with accompanying messages that were said to have been channeled through the deck’s creator, Ms. Caplan. The deck is “created with the magic and energy of intent,” or as the book also describes it, the power of attraction.

Lately I’ve been curious about channeling, so I am intrigued by the premise of this deck. The cards come in a high-gloss, sturdy box with a magnetic top flap. I’m surprised at how few Schiffer decks I have, so it’s nice to get to work with this one. The deck set is made in China, though overall I have few complaints about the quality. 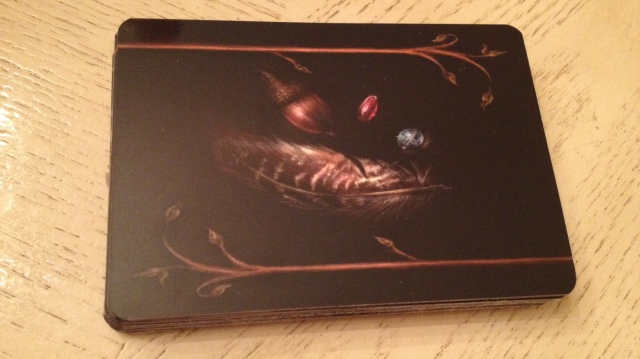 The card backs are not reversible with a naturalist feel to the art, and based on the Guidebook, it doesn’t appear to be a deck intended for reading with reversals, though one card in the deck got me scratching my head about the reversals. We’ll get to that later on.

One really neat attribute to this deck you’ll notice right away is that all the cards are horizontal, in landscape, and not the typical vertical setting we’re used to. I really like that. I also like the modern sensitivity, for example in the “Communication” card, seeing the Blackberry.

I can’t tell if it’s the printing quality or if it’s the artwork itself, but this is a very dark deck, as in very dark, saturated colors in the paintings and dark borders on the cards. The art is done on black backgrounds, and so given the style of art, as a publisher I might have opted for a matte finish, instead of the super-high-glossy finish that this deck comes in. These cards are so shiny, I had trouble taking photos. There was a glare in every pictures and you could see the reflection of my camera on the cards.

* Note: I looked up Caplan’s artwork online and it really is the print quality. Her art has a much more balanced quality between light and dark when you see the works on a computer screen, but in these cards, all the colors muddle together a bit and look dark. However, the dark muddle look ultimately works for the deck’s purposes, so I like it. It really sets the right mood.

Let’s try something a bit different from my usual deck reviews. Here’s a one minute video offering you a substantial sampling of the card images. Set to public domain Edvard Grieg’s Sonata in A Minor for Cello, Opus 36, the second movement. Something about the vibe of this deck just said Grieg to me. So here we go (promise it’s short–just 1 minute!):

I liked how the Guidebook taught about cleansing or clearing a deck before use, to shake away any residual energies or vibrations it may have picked up. Caplan instructs the reader to hold the deck in the receiving hand, which she said is the left hand, and with the other, the giving hand, presumably the right, knock on the deck a few times with the mental intention to clear the deck. I decided to give that a try, though my receiving hand is my right, and my giving hand is my left, so I switched that around. 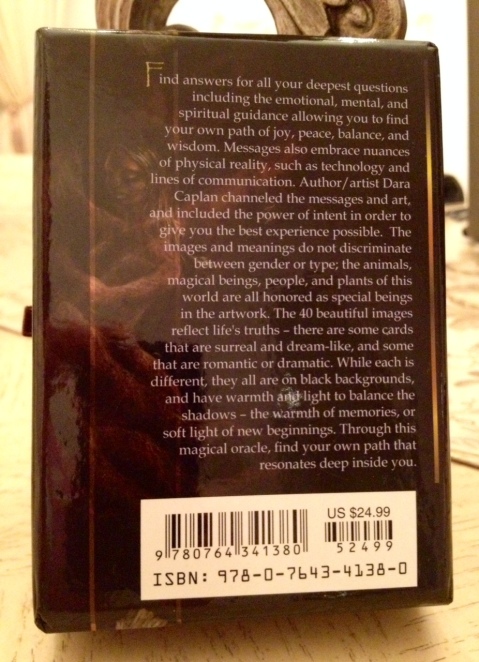 I really liked the description of the deck on the back of the box, so I’m including a photo of it.

As oracle Guidebooks go, this is a decent one. Here are a few examples of how the card corresponds with its Guidebook entry. 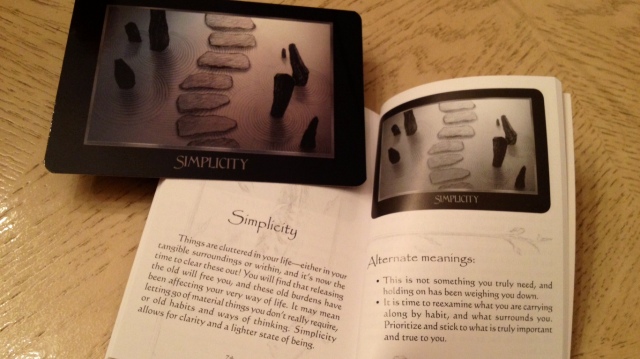 I really liked the artwork on the card “Simplicity.” The entries are in alphabetical order, so they’re easy to find, so long as you know your alphabet. This is a card about de-cluttering, with the message of letting go of material wants.

Here’s another card I really liked: “Spiritual & Physical Balance.” The message for this deck is to get into the practice of meditation. Many of the entries offer practical advice and holistic tips for spiritual wellbeing.

This card is about seeing the divine in the mundane. When it is the card drawn, it’s a message to look again at what you’re seeing through a different perspective, one on a different, higher energetic vibration.

If anyone can answer that question for me, I’d greatly appreciate it. I’m stumped!

Now of course, we have to see how this deck reads. I phrased a question in my mind and started shuffling. As I was shuffling, two cards jumped out of the deck.

In the Guidebook, Caplan notes that nothing happens by accident, and so if cards accidentally leap out of the deck while you’re shuffling, you’re to read those cards and take note of their messages. So I did.

I pulled the “Spiritual & Physical Balance” card again, and the accompanying Guidebook entry is already photographed above (scroll up). I didn’t feel like the card answered my question or addressed my specific concerns, but I know that oftentimes how the cards drawn relate to our question will become clearer with time, and may seem confusing in the short term. So I’ll set that aside, take note of it, and see what happens.

The other jumping card is “Sun & Moon,” and I like the parallel of both cards, how both address binaries or dichotomies of sorts. Now this card is interesting, with the Guidebook notes on male and female balance and family harmony. That makes a lot more sense given the nature of my question. 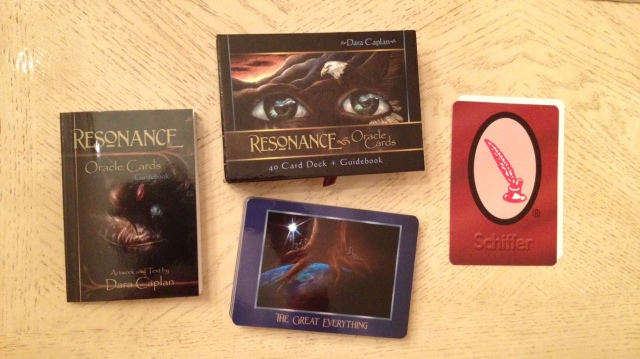 I’m going to continue practice and experimenting with channeling, and do so with this deck. One thing I like doing is getting into “that zone” that you do (for those who’ve dabbled with channeling) while you shuffle the deck, and then draw one card after another into a string of cards, one row, forming a sentence of sorts, or a stream-of-consciousness narrative, and letting the pictures and the words on those cards convey a particular message. Do this for individuals instead of specific questions.

So for example, I did what I do to get into the channeling mode for a message to deliver to a friend of mine, who we will call Jane.

Jane feels like her heart is crying out, having recently experienced an emotional loss, and why, why the loss? Constructs. Physical boundaries. Geographical boundaries. Space-time not aligned for the outcome she wanted. Yet communications continue– is this a relationship we’re talking about here?–the end of one, and yet neither party is really willing to sever ties permanently? It’s a trap, Jane, and you need to get out. Sever ties. Move on. Go forward. Here, Circles & Cycles reminds me of the Wheel of Fortune. It turns once more for you. Let go. Future relationship to come. “You’re Connected”– perhaps one met online.

In that way, this deck is pretty cool for channeling practice. The darker tones of the deck and the black background that the art is set on help dim the physical senses to turn on the intuitive. Overall, I found this to be an incredibly interesting deck to work with and will be trying it out on more folks with my little channeling thing. Fun times ahead.

3 thoughts on “A Review of the Resonance Oracle Cards”