The Penumbra Tarot by Australian artist Eris Elizabeth and Ethony is an enchanting and multifaceted deck that is both a perfect gift for a beginner and a versatile professional reading deck that seasoned readers will love.

This is an RWS based deck while the color palette is reminiscent of Lady Frieda Harris’s art in the Thoth, with more naturalist human representations than the Thoth. 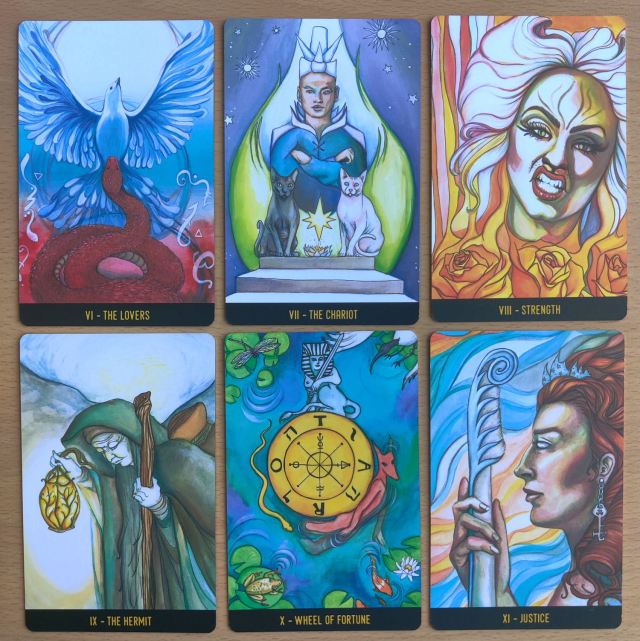 I believe these paintings are rendered in acrylics and watercolors, and the skill with which the hues are layered give the art an innate luminosity. It’s absolutely magical. 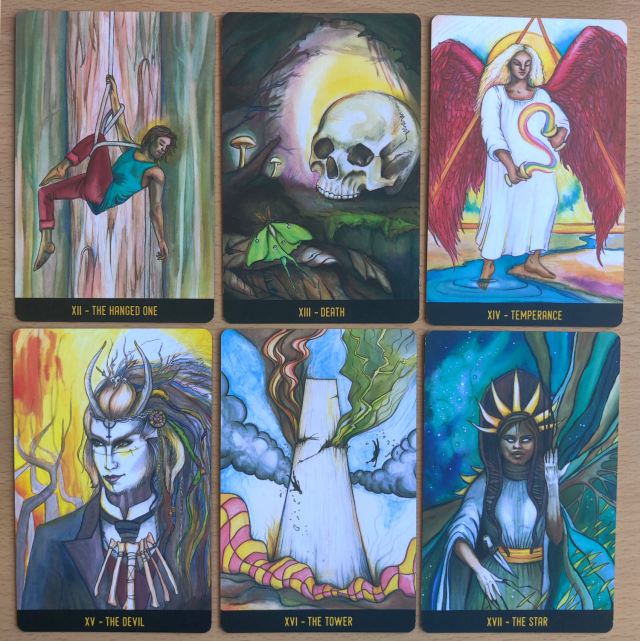 There is a close-up and well-defined focal point for each card, and that close proximity that the reader has to the subjects of each painting evokes an intimacy and easy familiarity. Eris Elizabeth’s works are statement pieces, with masterful control over color quality. 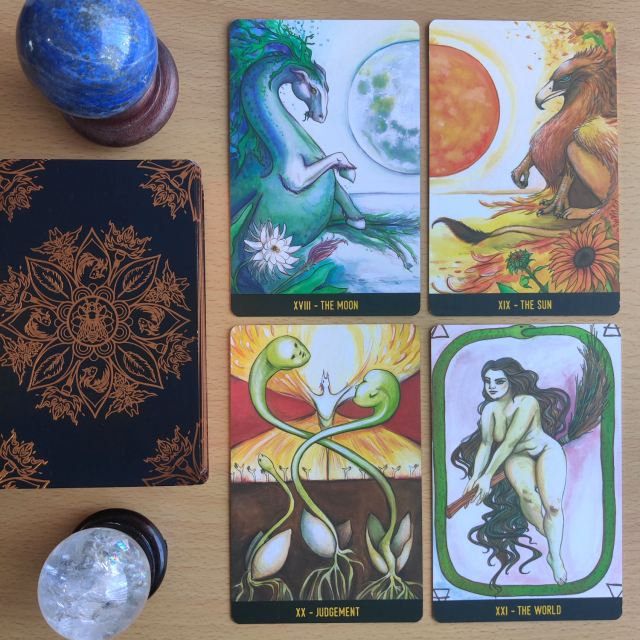 The deck feels vintage and timeless, with relevancy that will not age. And I love that the Witch is depicted on The World card. “The Witch at the end of the world is in flight; nothing limits her,” notes the guidebook. “She rides to the Sabat, impossibly, improbably, perennially. Defiance during the apocalypse is on-brand for the witch.”

These scenes merge our known, physical world with a transcendental spiritual or mystical realm, and the result is this beautiful hybrid of both walking a liminal space in your imagination. 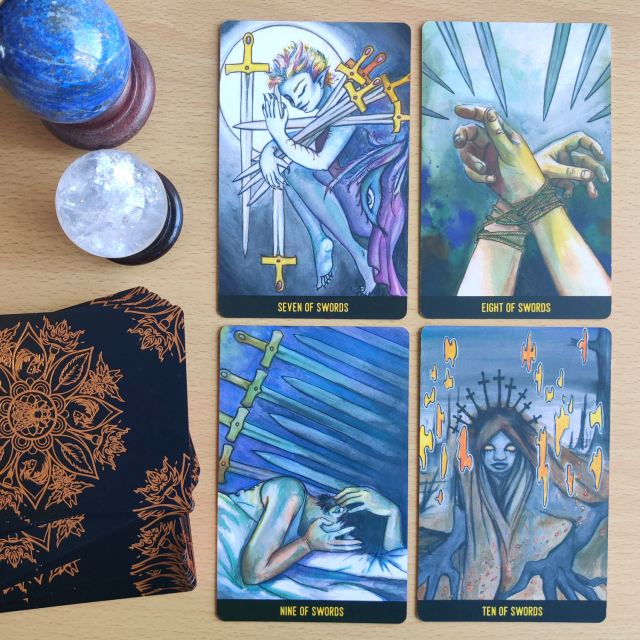 To supplement your readings with these cards, the guidebook entries are organized by Legacy, Apogee, and Perigree.

The Legacy provides the traditional card meanings, upright and reversed, written by Ethony. 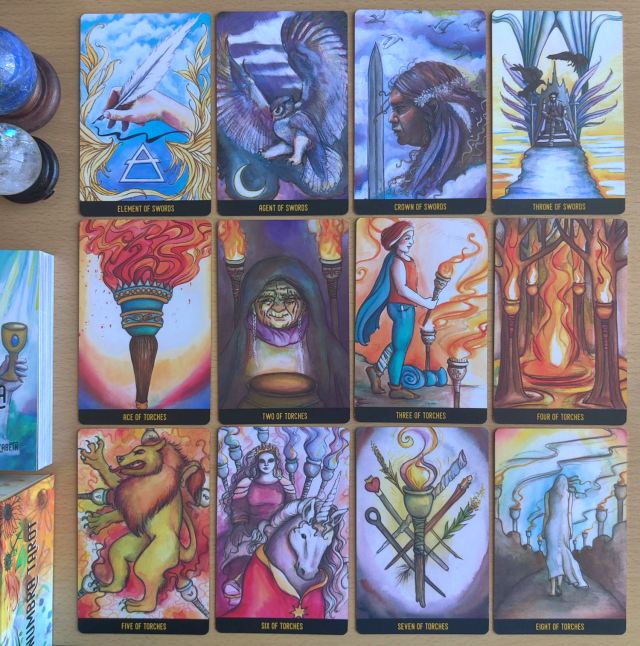 The Apogee (in astrology this is the point of the moon’s elliptical orbit that is farthest from Earth) is the card’s meaning as channeled by the artist Eris. These are the divine influences and artist intentions inspiring the art.

The Perigree (the point of the moon’s orbit that is closest to Earth) provides additional notes about the card. There’s also a song assigned to every card and thus a playlist of music you can find on Spotify to go along with the Penumbra Tarot. 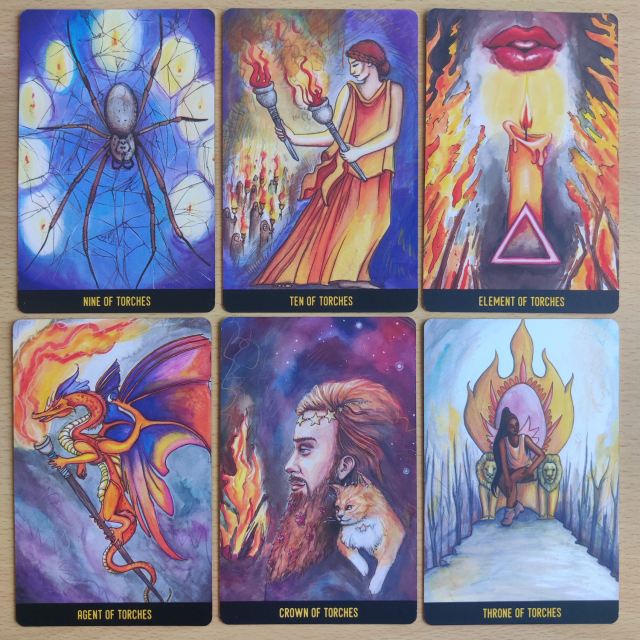 Take for instance the Nine of Torches (Nine of Wands), which you see above, featuring a spider weaving a web. The Legacy of this card is tedious work or having to redo work to fix something, a call for greater patience, or a sign to check your boundaries and protections.

The Apogee and Perigree note how the Golden Orb Weaver spider was the inspiration for this card, having to constantly repair her web and adjust it to the changing needs of the spider’s environment.

The Element (Page) cards all feature the alchemical symbol and are depicted in a more abstract and figurative way.

The Agent (Knight) cards feature an animal association– an owl in flight for the Agent of Swords; a dragon for Torches; a fish in a teardrop for Cups (beautiful!); and a kangaroo for the Knight of Pentacles.

I’m also loving the dynamic of how the Crowns feature a close-up side profile of the human figures while the Thrones feature a more distance full-body depiction of the figures. For the Crowns of the Swords and Cups, we see a womanly figure and for the Torches and Pentacles, we see a manly figure.

With a meaty guidebook that’s going to be a fantastic primer on how to read the tarot and interpret these cards, this deck and book set is great for beginners. The way it’s structured also means it’s a fantastic professional reader’s deck. 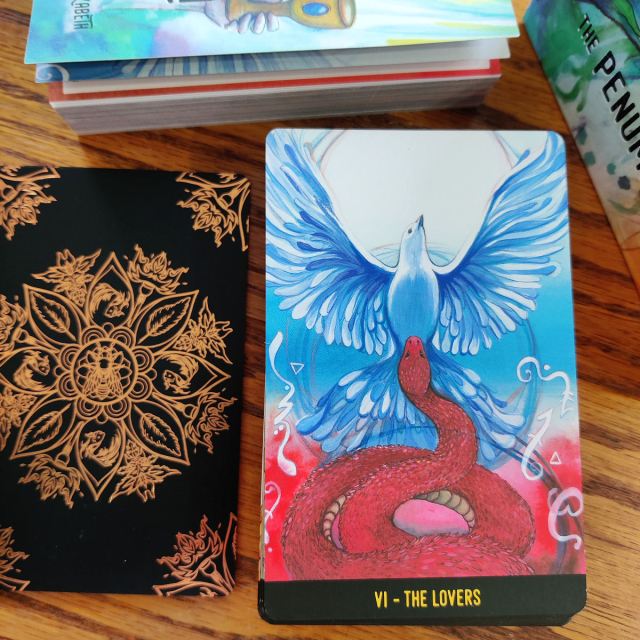 It’s versatile, with exquisite artwork that will activate your intuition, and has that matte finish that makes it perfect for photography in any lighting situation (now a “must” for anyone offering readings online or sharing tarot content on social media).

Since it’s Ethony, you know that no production detail was overlooked. I love every feature here, from the vibrant metallic amber edging to that amber floral/sacred geometry pattern embossed onto the card backs. 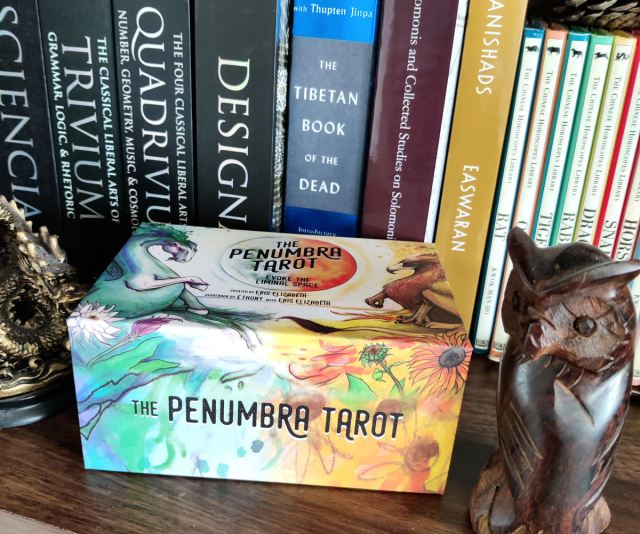 This deck doubles as a stunning ornamental piece on your altar or reading table. The set comes in a sturdy matte finish magnetic clasp box that itself is a vibrant statement piece.

FTC Disclosure: In accordance with Title 16 of the U.S. Code of Federal Regulations Part 255, “Guides Concerning Use of Endorsements and Testimonials in Advertising,” I received the deck from the publisher for prospective review. Everything I’ve said here is sincere and accurately reflects my opinion of the deck and book.