I’ve started a new project– a reconstruction of the Grand Etteilla. (The deck name won’t be “Etteilla Tarot Reconstruction,” I assure you. It’ll have some overly fancy name. That’s just a placeholder for now.)

The project premise I defined for myself was “reconstruction of the Etteilla,” but the first challenge presented was, which Etteilla? What do you mean by a “reconstruction” of the “Etteilla”? And then, like, the deeper I tried to philosophize on those questions, the faster my brain melted. =(

Here, I’m saying reconstruction because I will be rebuilding the deck with more overtly Hermetic references from the Divine Pymander, which I believe was Etteilla’s original intention. And while I want to stay true to the original imagery– I do– I’m also adamant that the overall approach needs to be updated.

But… (!!!) there’s no real consensus on that. So you’re going to find different Etteilla I, II, III designations in different places. As if I’m not confused enough. =) 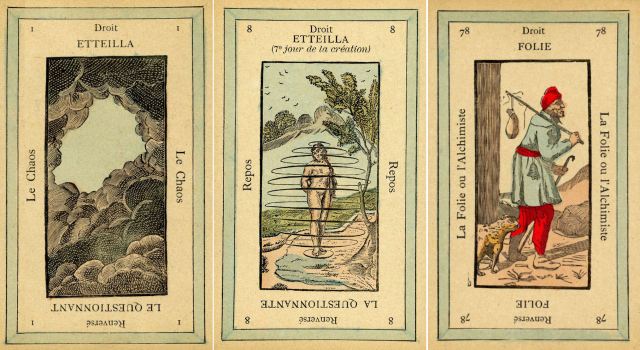 There’s also the Jeu de la Princesse Tarot circa 1843 sandwiched somewhere in between II and III, considered an offspring of Etteilla I. Another edition of Jeu de la Princesse Tarot seven years later changed Card No. 1 from the Male Querent (or The Man who Consults) to Thoth and Card No. 8 (previously the Female Querent) to Princess Tarot–“Princess Tarot” being described as a priestess or seer of Thebes and Memphis. After that there were a few more versions of the Etteilla of varying styles.

A 1969 Grimaud version of the Grand Etteilla features astrological correspondences where the first twelve cards are the zodiac signs, Aries through Pisces. So Card 1: Chaos is Aries, Card 2: Light (The Sun card) is Taurus, Card 3: Flora (The Moon card) is Gemini, and so on.

The first seven cards also signify genesis, expressive of Creation. Then Card No. 8 in the second septenary is the High Priestess (in some versions of Etteilla) or more frequently, titled Rest, for the Biblical seventh day of creation when God rested, which He then made holy.

And here’s how I interpreted the order of Creation that’s expressed in the first seven cards, per the Corpus Hermeticum:

If you haven’t worked with an Etteilla before, then immediately you’ll notice that the card numbering is not what you’re used to, be that TdM, RWS, or Thoth. And texts that explain the Etteilla are hard to come by… in English. Good thing I made it through AP French back in high school. =P

It took forever for me to initiate because I felt creatively blocked. The weight of all the challenges I could already anticipate in trying to reconstruct an Etteilla Tarot in this century (…for those who know, you know what I’m talking about…) and trying to figure out where my iteration of the cards will be between conservative-preservationist of the Etteilla traditions vs. progressive-socially-evolutionary updates to bring it into the present zeitgest was just more than I could chew.

And the guidebook– I wanted to stay true to the card meanings prescribed in classical Etteilla texts like the 1838 Orsini and the 1867 Lemarchand. Except for the guidebook to be usable, I’d have to update it. For one, the way the predictions are gendered don’t always make sense for today’s readership. Two, a lot of the card meanings are… just not as likely to be applicable today. For example Card 7, Birds & Fishes. If you’re a female who gets that card, it can predict that you’re going to get an aviary full of exotic birds. … Yeah. And if you’re a male who gets that card, you’ll enjoy success at your next fishing escapade. Like that’s so literal.

It turned out that the best thing to do was to slop some colorful crap down on canvas and post it to Instagram to immediately confirm that my first draft direction was crap. But hey, it got me out of my funk. I was so disempowered by the fear of being wrong that I didn’t realize that being wrong was the prerequisite first step.

Card No. 1 Thoth-Hermes is Le Chaos, featuring the numinous void or primordial chaos. Expressing a Hermetic cosmogony, per the Corpus Hermeticum, this is divine spirit, or consciousness, before self-manifestation, before there is any form to that spirit. It’s likened to the Ein Sof or the Tao.

Card No. 2 The Sun & Osiris, or Knowledge of Ra, is the Divine Pymander (Poimandres), where I deviated slightly from the classical imagery.

The most recognizable symbolism for the Etteilla Sun card is the twin naked babies in the foreground, the forebear of the naked baby on some subsequent Sun cards in the tarot.

In the spirit of Hermeticism and popular Euro-Western symbolism, the twin naked babies signify the Apollonian and Dionysian dichotomy. Apollo, the sun god, is order, rationalism, and forbearance. Dionysus is chaos, passion, and instinct. One is intellectually-driven; the other is emotionally-driven. You’ll note how the reversed card meaning is ascribed Passion. Beyond that, the twins also represent the inherent binary necessary for Creation through the Light.

There’s just one problem… I really, really do not like the naked babies imagery.

Nor do I think that imagery automatically communicates what it’s “supposed” to communicate to the modern tarot reader. Certain imagery symbolic for certain popular ideas could be depicted in the 1800s because the majority of the audience got the reference immediately. But times have changed. What made sense to Etteilla’s audience in 1791 doesn’t make sense to the tarot readership of 2022. So to insist on antiquated imagery is a bit dogmatic.

You’ll see how in the 1843 Jeu de la princesses version of Etteilla I, Card No 2 is “Osiris or the Sun.” So I ran with that.

What I considered the crucial symbolic imagery in the Sun card wasn’t the two naked babies, but rather, the five-pointed illuminated star. And the inherent binary in the Sun for the alchemical wedding (one of the divinatory meanings for this card is marriage), I represented that with the crook and the flail for the binary requisite of sovereignty. The Sun card, at its essence, is understanding and attainment of knowledge after no-understanding and un-knowing. So that’s expressive of achieving sovereignty.

The First Septenary expresses the creation myth. Card 1 is primordial Chaos. Card 2 is Light. Here, Card 3 is Time, which in almost every ancient culture was measured by the moon phases.

Card No. 3 in the Etteilla though… so whether you read with a Marseille or RWS, it’s clear this is the Moon card equivalent. Right? But then the card title is… The Plants? My challenge here was wanting to preserve the iconic Moon card symbolic imagery, but pictorialize the card title “The Plants” a bit better.

Is that supposed to be a Chinese court official? I know the facial features don’t look Asian, but that’s a mian, or the headwear of ancient Chinese noblemen. It even has the right number of those pearl hangy thingies– 9 of them.

For the layout design in some of the cards, I’m playing around with the idea of “breaking the fourth wall.” Earlier in Card 1, Thoth-Hermes appears to be stepping out of the frame. If you look closely at Card 2, The Sun & Osiris, his shirt sleeves poke out just a teensy bit.

Card No. 4 The Stars & Nyx, or in the earlier Etteilla decks, titled The Sky, is still a draft only. Well all of these are still working drafts, but here, I’m still see-sawing between whether or not this card needs a tree. In lieu of the more familiar bird on this card, here you’ll find a butterfly like you did in most of the Etteillas.

In a 1785 comment, Etteilla criticized the removal of the butterfly from certain prevailing versions of The Star card (“the hieroglyph called The Star”) printed by other deck makers of his time. So I definitely needed to keep in the butterfly. =)

Card No. 5 The World represents Matter. The creation myth so far: Chaos, Light, Time, Space, and Matter. If Card 4 The Stars is the Space above the firmament, then Card 5 The World is the physical manifestation below the firmament.

Ohhhhh how I struggled with this one.

Don’t know why the Etteilla III (I think that third one from the left is an Etteilla III?) doesn’t have the pair of obelisks, but from everything I’ve read, they’re important, symbolism wise. 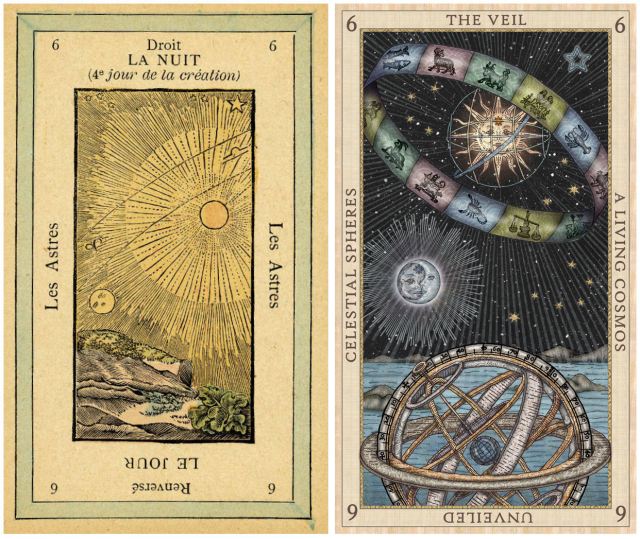 Card No. 6 The Veil is the in-between firmament that separates heaven and earth, the spirit world and the physical world. In the continuation of the creation myth, this is Quintessence, or gravitational pull, the curvature of Time and Space by which all Matter attracts one another. Depicting twilight and then dividing the card composition into Day and Night is a metaphor for that Veil, or firmament.

Card No. 7 The Tree of Life was originally titled The Birds and the Fish or alternatively, divided so one half is Birds and Sky and the other is Fish and Sea. This is in reference to the Biblical fifth day of Creation, when God filled the oceans with fish and the skies with birds. I kept with that composition, but added a World Tree. Which is fine, right? That Jeu de l’Oracles des Dames version has a tree… 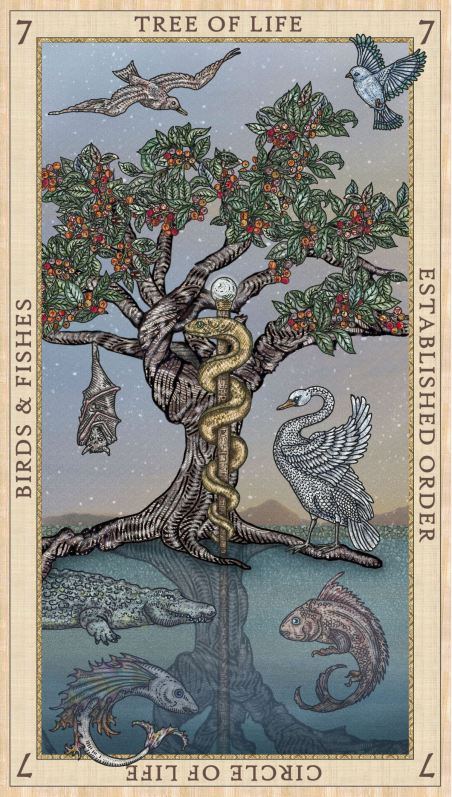 And I completed the First Septenary on the eve of the March equinox. I started the drawings on March 5. So about two weeks to complete these initial seven cards.

Oh, and if you’re wondering about the elemental correspondences that’s given in the historical Etteillas:

I’m working on the guidebook in tandem with the illustrations. The guidebook will feature both the art on the deck I’m creating and one of the historical Etteilla decks (which one is featured for each card entry is more of a logistical question of access than it is a creative or even intellectual decision). 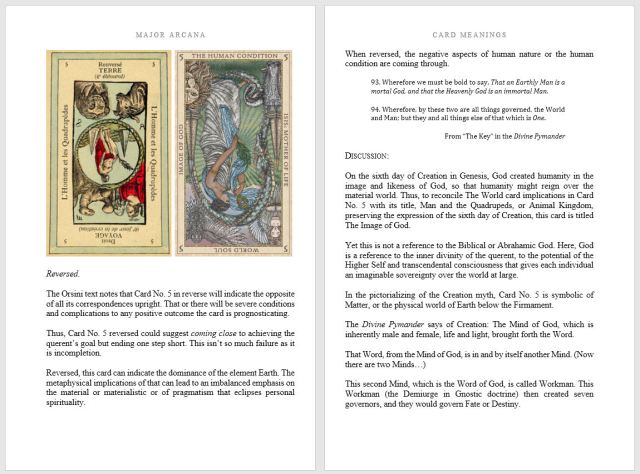 The divinatory meanings are cited from Le Grand Etteilla ou L’Art de Tirer Les Cartes authored by Julia Orsini, though that’s speculated to be a pseudonym of the publisher, Blocquel. There are a couple more Etteilla texts I want to add so the guidebook is comprehensive, but baby steps. =) 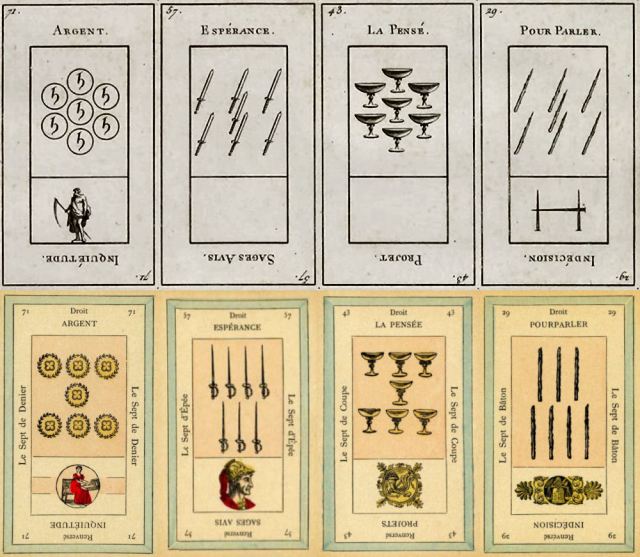 I’m still working my way through the Majors, and for those who tracked my SKT art process, you know I like to do things in order. =) So it’s going to be a while before I get to the pip cards. Nevertheless, I’m sure many of you are eager to hear about how I plan on approaching the Etteilla pips.

The short answer is I don’t know yet, but I’m with you—I’m concerned, too. Iconic Etteilla pips are kinda bleh. But if I do too much reinvention to them, then at what point is it no longer classically “Etteilla”?

The pips in my reconstructed Etteilla deck need to feel iconically Etteilla, but at the same time, not feel half-assed. So the Minors will certainly be one of the big challenges in this undertaking.

For those of you who feel like you’ve gotten a pretty good grasp of my personality by now, then you already know– and for those who don’t know, here’s a fair warning of what’s to come: I tend to get pretty obsessive once I’m knee-deep in a project, at the sacrifice and expense of everything else going on. =) You are going to be hearing a lot about this Etteilla deck project, and Etteilla this, Etteilla that, for the next… I dunno… year? Two years? Hehe.