Nick Bantock is the author of 30 books, with about a dozen of them making bestseller lists, including the New York Times. He’s also an artist. His latest publication is a deck of personal archetype cards, The Archeo.

This deck of 40 cards represents 40 inner facets, or characters of you that make up your identity, though some– or most– of these facets remain latent. Archetypes are flexible, not fixed, stereotypes, and meditations on our inner archetypes help us to grow and shape our individual needs. 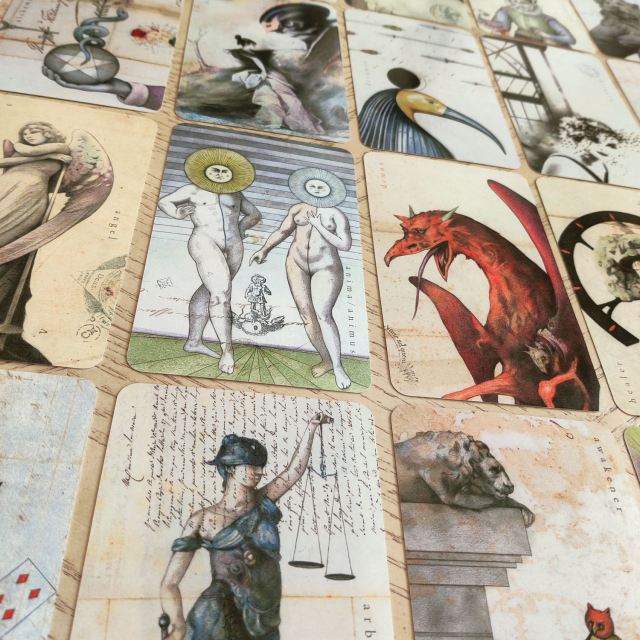 The term “archeo” is coined by Bantock to represent the concept of multiple archetypes in one. The word also calls to mind “archiac,” to signify that these archetypes are primordial, and are psyches we’ve inherited from our ancestors. The purpose Bantock set out to achieve with The Archeo cards is to produce a tool that will help you to cultivate a healthy, functional personal mythology. 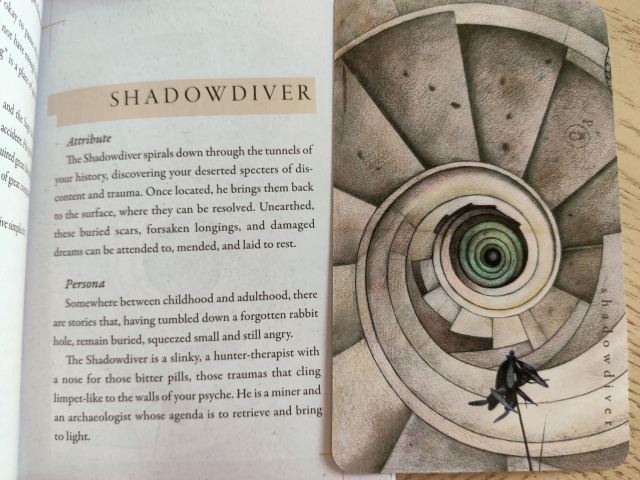 But these cards do not purport to be oracles for divining the future. Furthermore, Bantock insists that you don’t dive straight into the cards as you might with a tarot or typical oracle deck. Instead, begin by reading through the section of the companion guidebook addressing layouts. Why? Because the Archeo deck is a powerful tool that requires some preliminary understanding, and an orientation, before it’s fully unleashed.

All right. Following the author’s advice, I begin by reading the “Layouts & Spreads” chapter of the book. Once again we’re reminded that this deck isn’t for predicting the future, but rather, to help you “look into yourself and see what your better selves already perceive but cannot grasp.”

The first spread instruction is to lay three cards in a row, presumably selected at random from the deck. The order I pulled them in (wasn’t specified in the guidebook) was center, left, then right. I’m digging the symmetry across my three randomly selected cards.

Then study the three cards while asking yourself how these three cards echo what you already know about what’s going on in your present life. This was tough for me, as I didn’t quite grasp how I already know myself to be a trickster or metamorph, but I don’t want to dismiss the synchronicity of having both a trickster archetype and a metamorph, where there’s such a striking shape-shifting similarity between them. Then sandwiched in between, that reflective card.

Next step, deal out six more cards, three above that first row and three below. These new cards are influencers over the first three. These additional six cards will reveal what has been concealed from your conscious awareness or what you’ve been failing to pay attention to.

So now we’re doing a nine-card reading and that’s what it feels like– an oracle card reading, even though the guidebook begins with the note that this deck won’t read like typical oracle decks.

Other spread recommendations take cues from Sallie Nichols, where you work with the deck face up, go through the cards and intentionally pick out the card images that seem to be calling out to you. You ask a question and then as you focus on that inquiry, go through the cards and pick the one you are most drawn to in the moment. Try to act on impulse. Then read the card’s entry in the guidebook and reflect on what creative insights are inspired from reading the card’s entry.

When I’m looking at all the cards face up, the above three are the ones I immediately gravitated toward: the Alchemist, the Awakener, and the Intimate. To get a sense for what the guidebook offers on each card, let’s deep-dive into the Awakener.

The Awakener’s Attributes: The challenge here is to wake up from endless daydreams. This card is a reminder to engage fully with the world and don’t distract yourself with shiny things or simplistic solutions.

The Awakener’s Persona: This is one who is awake while others are figuratively asleep, “glazed, blank eyes of so many distracted sleepers stumbling from one small preoccupation to another.” The Awakener breaks from that state of dulled apathy.

The illustrations are inspired by well-known and familiar medieval to 18th century engravings and paintings. The compositions then appear to be a form of picture-pile collage and have that mixed media effect. There is a lucid dream-like quality to the art that I love. On many of them you’ll see inked stamps for that passport effect.

To deep-dive into who you are, shuffle the Archeo cards and ask: What survival skills do I possess that might help me? Then pull a card and take some time to reflect on what answers are inspired by that card. Use the entry in the guidebook for some guidance.

Two blank cards are intentionally included for your own personalization. Bantock recommends that you draw, paint, or collage to create the two additional Archeo.

To help you get to know each Archeo (each archetype card in Bantock’s deck), there’s a chapter of 40 short tales that give you the narrative back story of the Archeos. For The Alchemist card, for example, there’s The Alchemist’s Tale. A lovely microfiction piece gives you a glimpse into the Alchemist’s life. The Angel card is accompanied by The Angel’s Tale, and so on. 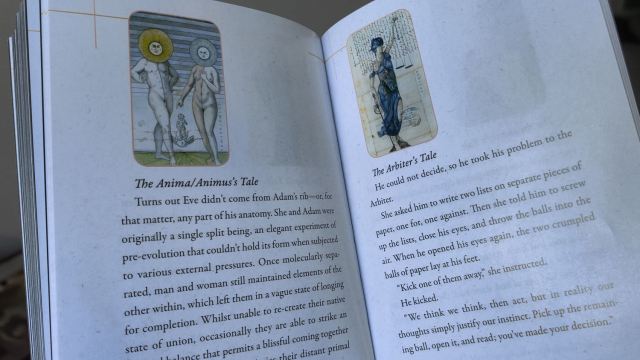 I really like The Arbiter’s Tale, the Archeo card featuring the Lady Justice figure. When you can’t decide on a problem, write two lists on two separate sheets of paper, one for and one against. Then crumple up the two pieces of paper into balls and toss both into the air so that they land at your feet. Kick one of the two crumpled balls away from you. Pick up the one that remains and read it. You’ve made your decision. I love that!

The main body of the guidebook gives you the Attribute and Persona for each card. The default genders given in the text can be reassigned, assures the author. The full-color glossy pages are also a delight to work with. 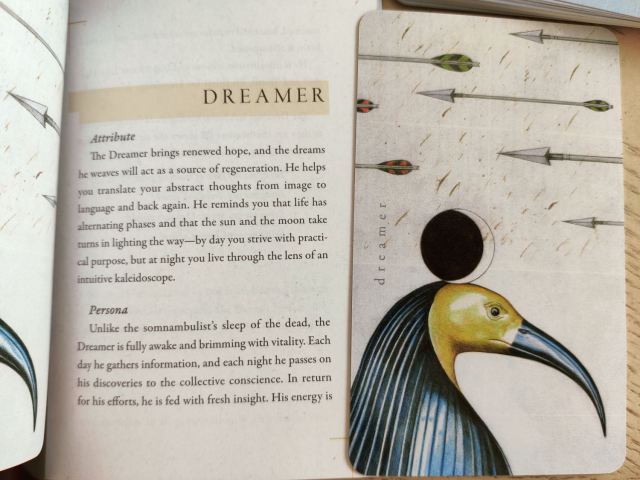 If you’re feeling skeptical about playing with oracle cards but have that creative artist’s mind, then you might really like The Archeo Personal Archetype Cards by Nick Bantock. They’re keyed specifically for self-reflection, journaling, and to inspire you.

FTC Disclosure: In accordance with Title 16 of the U.S. Code of Federal Regulations Part 255, “Guides Concerning Use of Endorsements and Testimonials in Advertising,” I received this deck and guidebook set from its publisher for prospective review. Everything I’ve said here is sincere and accurately reflects my opinion of the deck.

2 thoughts on “The Archeo Personal Archetype Cards by Nick Bantock”