END_OF_DOCUMENT_TOKEN_TO_BE_REPLACED

Here’s a quick flip-through, rather than an in-depth deck review, of The Distant Past Tarot by Jeri Totten, who now goes by Jae Larson. The deck comes in standard tarot size, large size, and what you see here– a petite poker size. The Distant Past Tarot is an RWS-based digital collage tarot deck in a classical art style.

This deck seems to have flown a bit under the radar, while still being available for purchase direct from the artist, so that’s why I thought I’d share this flip-through. It’s actually a surprisingly delightful and enchanting little deck– I say “surprisingly” because I don’t hear a lot of fanfare about it.

END_OF_DOCUMENT_TOKEN_TO_BE_REPLACED

Printing and production completed on July 21, 2021. You might recall from an earlier update, the projected completion date I had gotten from the factory was July 19 at the latest. So we are running behind schedule.

The decks then had to go through one final quality assurance check at the factory before it’s packaged and prepared for overseas shipping. The shipping time is between 45 and 50 days.

We’ve been assured by our factory that the decks are shipping out this week, but as of this precise moment that I’m typing, it has not been shipped out yet. Just to keep the numbers and projection on the conservative side, let’s assume the factory isn’t ready to ship until Friday, which means it actually ships next Monday, August 3. Sigh. Okay.

It then has to go through US customs. The last time we went through US customs for a large shipment was pre-pandemic, and it took about 7 to 10 days. I heard from other business owners who import goods that right now it’s closer to 14 days.

So let’s just assume my shipment arrives on September 21 and takes 14 days to go through US customs. We’re now looking at actual receipt of the decks around October 5.

END_OF_DOCUMENT_TOKEN_TO_BE_REPLACED 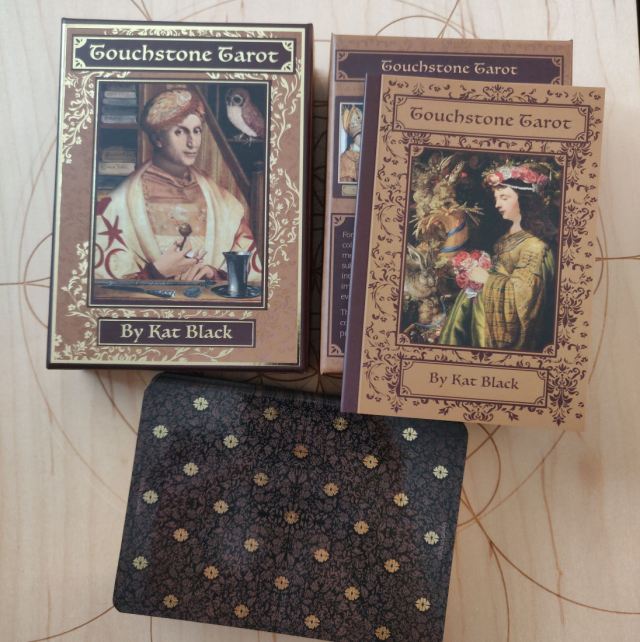 The Touchstone Tarot by Kat Black is a masterfully done digital collage deck that you would never know was digital collage unless told. Working with Renaissance and Baroque classical art, the deck is a European art gallery in a box. 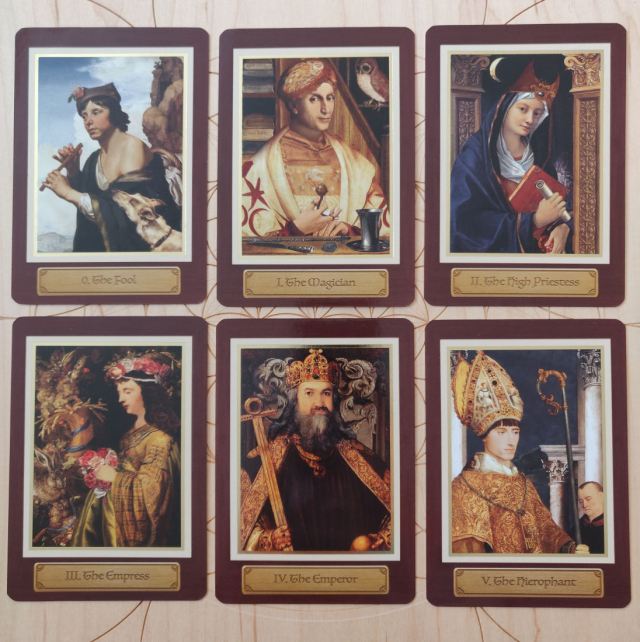 Black’s Golden Tarot remains one of my all-time favorite decks and Touchstone is right up there with it. Funny story actually. When I first opened the box of cards, which was sent to me by U.S. Games, I didn’t read the box and went straight into sifting through the deck art. My very first thought was, “This is a copy of Kat Black’s art style!” … only to realize… it’s Kat Black’s deck.

That’s an incredible testament to how consistent and defined Black’s style is as an artist. She’s got such a signature that I can spot her work miles away.

END_OF_DOCUMENT_TOKEN_TO_BE_REPLACED

The Navigators Tarot of the Mystic SEA is a deck for occultists who sojourn that Mystic Sea, “charting a course between sharp, fateful rocks and perilous cliffs, to harbours’ grateful rest. And when the journey’s done, sought other quests. . . . A Library of books set in the heavens, stretching beyond all logic, Infinite. . . . The Navigator scryed to learn this source. Hermes revealed the Holy Cabalah. The archetypes from that eternal base, create clear symbols which, in turn, embrace this Tarot of the Mystic SEA.” (poem accompanying the deck, by Julia Turk)

In most places, SEA is all-caps, which suggests to me it’s an acronym, while in other places, there’s a straightforward reference to the Thoth-Hermetic Mystic Sea. I believe I’ve combed through the LWB thoroughly in search of what SEA stands for, but couldn’t find it. The old Aeclectic Tarot forum came to the rescue. According to this thread, the Mystic SEA is the Mystic Society of Enochian Anchorites (SEA), anchorites being essentially a hermit or solitary ascetic of a religious devotion.

END_OF_DOCUMENT_TOKEN_TO_BE_REPLACED 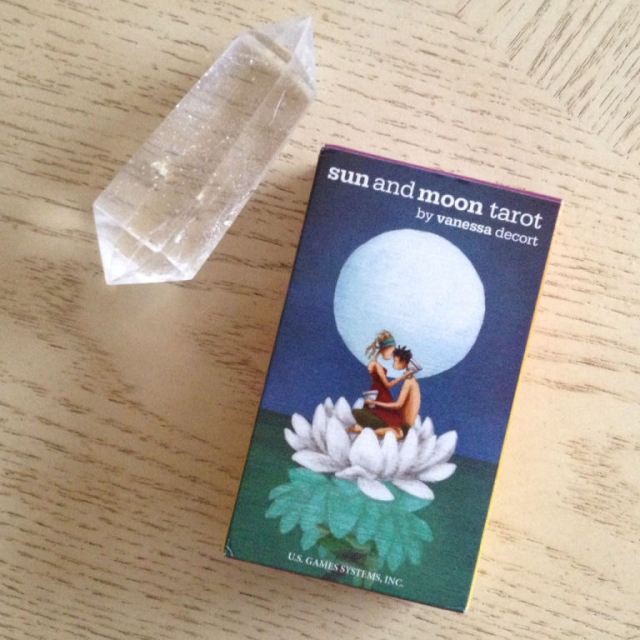 I had known about this deck for years, but didn’t own it. Then once at a public reading event, someone I read for told me about his first tarot deck. “It was the Sun and Moon Tarot,” he said, and was trying to describe the deck to me. I knew exactly which deck he was talking about.

“It’s got two lovers on a lotus blossom on the box cover, right? With a full moon? Bluish box?” I said. At the time, and this was years ago, the Sun and Moon Tarot was really popular, and everyone was talking about it. So of course I had heard of it, but just never gotten around to pulling the trigger to buy.

Then synchronistically enough, a month later I was gifted this deck.

And I really do adore it to pieces.

The Sun and Moon Tarot by Vanessa Decort was published back in 2010 by U.S. Games. It is a Thoth-inspired deck with notable Rider-Waite-Smith influences. In Decort’s bio, she notes that the Thoth was her first tarot deck.  The edition featured here in this blog post have white borders, but I’ve also seen a version with black borders, if that interests you.

END_OF_DOCUMENT_TOKEN_TO_BE_REPLACED 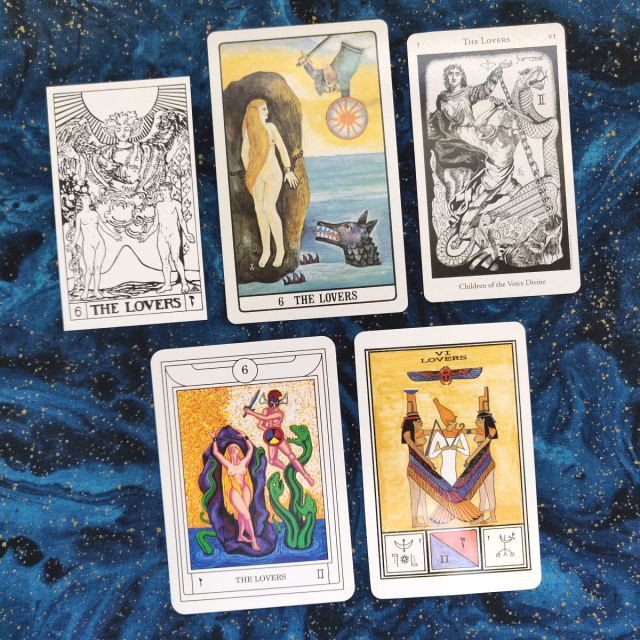 This past week I posted deck reviews, which turned out to be more like discussions, on the above five occult decks and their companion guidebooks, with references back to Regardie’s texts, Waite’s Pictorial Key, and Crowley’s Book of Thoth. It was time-consuming and quite the Effort, but I thought, one-and-done, meaning let me just knock each of these out of the way and then have it memorialized on my blog for future referencing.

If you’re a tarot enthusiast, then I hope there were inclusions of insights from those discussions that you’ll want to add to your personal tarot journal. For me, even while I’ve worked with the tarot for two decades plus, the process of consolidating study of these Golden Dawn based decks in quick succession synthesized so much.

Even most of the light, fun, fast-and-easy pretty decks published as of late are at their essence rooted in the Golden Dawn system, whether or not it was consciously done.

No matter how you feel about the Golden Dawn system of correspondences or the melding of a Christianized perspective of Kabbalah (or calling it Hermetic Qabalah to make the distinction), it’s impossible for the tarot enthusiast to deny the objective influence of the Golden Dawn on the popularized versions of tarot today. 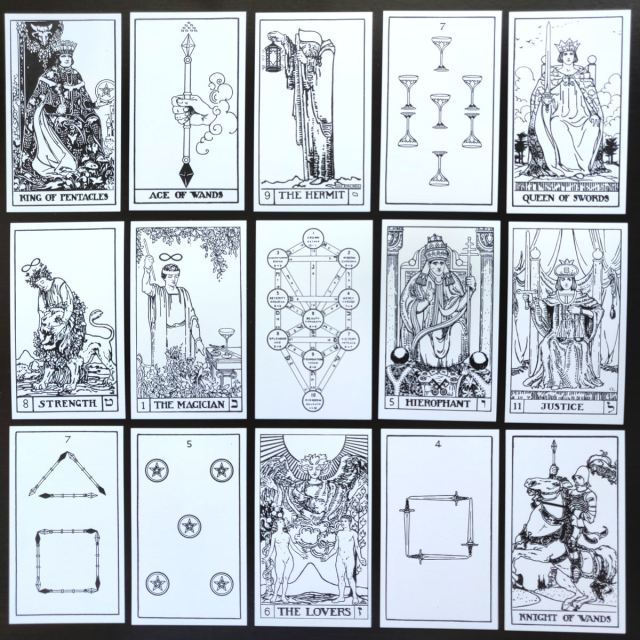 And so I thought, hey, somebody out there is going to maybe probably benefit from this focused study of select GD-based decks. I hope even scrolling and skimming the five deck discussions will impart a rudimentary foundational understanding of this Western occult heritage.

END_OF_DOCUMENT_TOKEN_TO_BE_REPLACED

The Hermetic Tarot by Godfrey Dowson was one of my earliest deck reviews on this blog, back in 2013. And it wasn’t even really a deck review. I don’t know what that was other than a little bit too cringe for me to try to reread now. Anyway, let’s revisit the deck and add this posting to our cluster of Golden Dawn deck discussions.

The Hermetic Order of the Golden Dawn was active for only about fifteen years, and yet consider the scope and breadth of their influence in Western occultism, especially in the world of tarot. Even fun, flighty, not-at-all-occult mass produced pop tarot decks are unintentionally influenced by the Golden Dawn.

Crowley first published a description of the Order’s card designs in The Equinox in 1912, riling MacGregor Mathers to the point of litigation to try and stop Crowley’s publication. Then around World War II, Israel Regardie published the Golden Dawn card descriptions again, and provided oversight to both Robert Wang and the Ciceros in their subsequent GD decks. The LWB introduces Dowson’s deck as one more Golden Dawn based tarot deck in the line of succession since the Order dissipated.

Dowson’s pen and ink drawings for the Hermetic Tarot were done between 1975 and 1977, with the deck published by U.S. Games in 1980. Stuart Kaplan co-wrote the LWB that comes with the cards. Kaplan remarks about the Hermetic Tarot that it is a “compelling reconstructed version of the tarot that undoubtedly will take its place as one of the most important esoteric tarot decks published during the twentieth century.”

END_OF_DOCUMENT_TOKEN_TO_BE_REPLACED

The Tarot of Ceremonial Magick by Lon Milo DuQuette and Constance DuQuette was first published by U.S. Games in 1997, then republished in 2010 by Thelesis Aura. The edition you see here is from the Third Printing, 2013. Interestingly, these cards were printed in the Republic of Korea. Since it’s rare to see that, I thought it was worth a mention.

While DuQuette is a Thelemite, and therefore you’re going to see strong influences from Aleister Crowley’s Thoth throughout this deck, not to mention a portrait of young Crowley on The Magus card, it’ll be instructive to consider this deck alongside the Golden Dawn based decks covered earlier this week: the Golden Dawn Tarot by Robert Wang and the New Golden Dawn Ritual Tarot by Chic and Tabatha Cicero.

END_OF_DOCUMENT_TOKEN_TO_BE_REPLACED 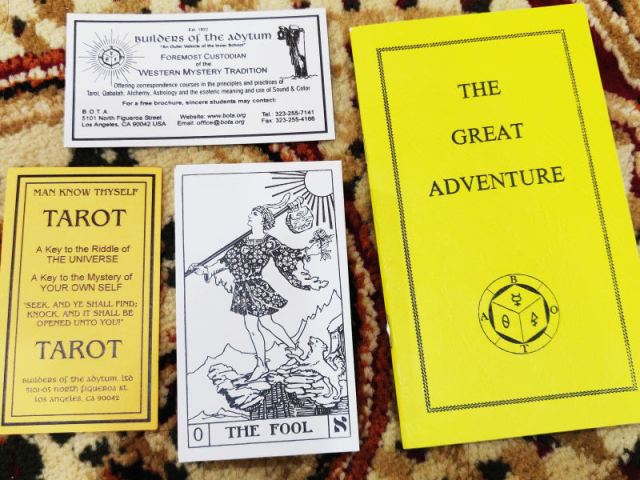 You can buy the black and white deck for coloring direct from the Builders of the Adytum here for just $8.50. It’s an incredible deal! I’ll share more photos of the physical deck later in this review, but it’s matte, unrounded corners though, and lovely quality.

The digital images of the Major Arcana for download can be purchased for $5.00, linked here and digital the Minor Arcana digital files for $5.00, linked here. B.O.T.A. also has a couple of other deck purchasing options at their online store, so be sure to check it out, and nothing over $20– great prices. (fyi this is not an advertisement or promo; no one paid me to say any of this.)