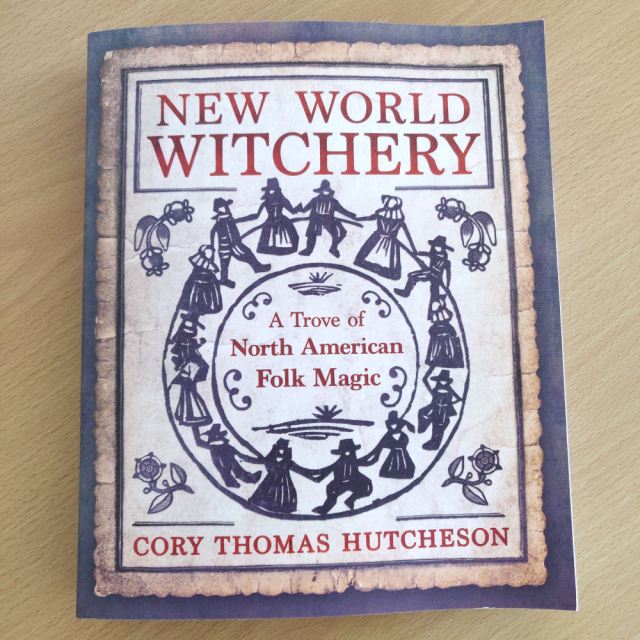 New World Witchery: A Trove of North American Folk Magic by Cory Thomas Hutcheson and published earlier this year by Llewellyn is a must-have for your personal occult library, and this book review will try to convince you of why. 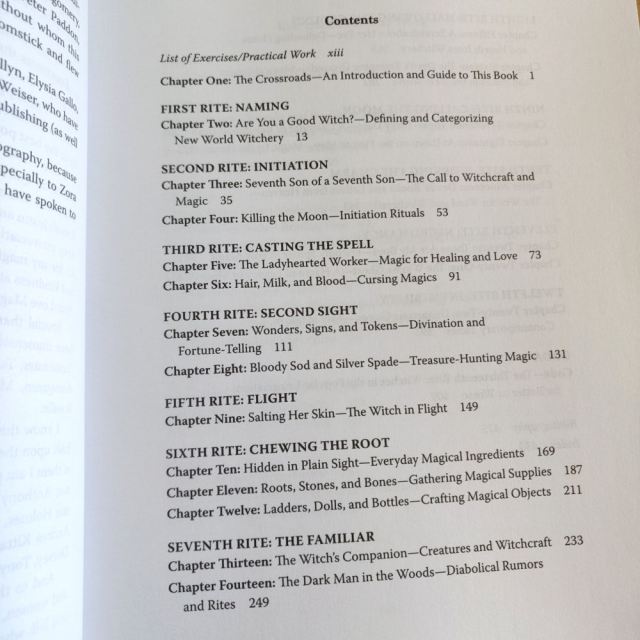 The text is subdivided into Twelve Rites, from defining witchery and discussing initiation to coverage of common practices in North American traditional folk witchcraft, with exercises and practical work, all the way to commentary on witchcraft in pop culture.

That is one ambitious scope, and Hutcheson pulls it off– this is quite the hefty tome of a book!

Let’s start with defining who is a witch. I appreciate Hutcheson’s acknowledgement: “Whatever image pops into your head when that word passes by in conversation–whether whispered reverently or barked in anger– that will be the definitive image for you.” That kind of has always been my own bone to pick with the term “witch.” What does it even mean? How is the label useful today? He continues, “Many magical practitioners reject the term ‘witch’ either because of its negative or its religious connotations.”

The “New World” reference in the title is to anchor the scope of the content to how a particular place shapes the form of magic there. For instance, the local spirits and magical landscape around British Traditional Witchcraft in Europe can often feel distant here in the United States, where Brer Rabbit, Sop Paw, the greasy witches of the Smoky Mountains, traditions from West Africa, and the Native Nations converge in ways that might then feel distant in Europe.

Where certain cultural practices feel distinct in Europe, they blend together in North America, like that of the Scots-Irish, the German settlers in Appalachia, African and West Indies traditions of Rootwork and Hoodoo, with Catholicism. Whether you use the sociological term of the melting pot or the occult term of a crossroads, that’s what New World Witchery is about.

Defining what exactly is witchery, Hutcheson gives an overview of the following:

And that ties us to present day forms of New World Witchery, like contemporary feminist witchcraft where critical race theory, gender studies, and intersectionality meet the seven magical practices listed above.

The book is written in second person, a seasoned witch addressing the student witch, covering a wide range of topics you would be curious about when it comes to contemporary witchcraft and how to formulate your personal practice. “If you are practicing folk magic in North America, you are a New World Witch. Use this book as a way to travel around the landscape, exploring more, and adding to your magical stores along the way.”

Chapter by chapter, you’ll read folktales and local legends about witchcraft or magic, such as the Paiute prophet Wovoka leading a powerful ceremonial dance known as the Ghost Dance to unite many Indigenous Nations. Or Auntie Caroline Dye from Newport Arkansas, who was a seer and conjure worker, Tituba from the Salem Witch Trials, or Mary Black. You’ll read about Mother Lane, the Mexican American psychic medium and healer and Nelson Rehmeyer, a healer in the braucherei or Pow-wow tradition from York, Pennsylvania, Granny Tucker from the Gulf of Mexico, and Grace Sherwood, the Witch of Pungo. These stories are given in sidebars under the category “Singing Bones.”

Sidebars titled “Dirt Under the Nails” give step by step spell-working instructions from various North American magical traditions, like how to create a sweetening jar, or a souring jar, blood verses, a success bundle spell, or a ritual for meeting the Devil in the forest at midnight, and more, to 21st century technology cleansing spells.

There is some really good, meaty info in here on folk medicine, with lists of healing herbs categorized as regional to the eastern part of North America and the western part. The east includes American ginseng, juniper, witch hazel, tobacco, alder, etc. The west includes agave, cat’s claw, mallow, poppy, white sage, or yucca. What I found amusing is how many of the listed herbs for the east coast are grown by my mother in upstate New York and how many for the west coast are grown by me here in northern California.

Let’s discuss the section on Witch Flight, which I’m not familiar with at all in terms of western folk magic and witchcraft. So pretty much all of this is new to me. My readings on the topic from various sources, including Hutcheson’s book, and my tenderfooted comparative analysis leads me to maybe the Taoist magic equivalent of astral travel, or meditative visionary journeys.

So a folkloric witch (in popular North American traditions) flies on a broomstick (or the metaphor of a broom?) to sabbats or to cast spells. Then there are magically crafted salves like flying ointments or witches’ grease, which are basically hallucinogens and psychoactive substances, or using a witch’s bridle to ride animals, or ride other humans. There are many more specific practices under the category of Witch Flight that the book covers, but I’ll stop here.

In the context of studying cultural anthropology, all of this is fascinating to me. And important for Hutcheson to have included in such a book, so to that, well done.

The title of this book is no lie: this is a trove of folk witchery. There’s a lot of practical insight on domestic magic, or imbuing magical practices into cooking and cleaning. A notable example is using store-bought Pine-Sol, which a witch might use not just to clean house, but also to exorcise the home of evil. Ammonia and salt added to mop water can also be used in magical housecleaning. There’s also a recipe for Four Thieves Vinegar. A Hoodoo tradition calls for using urine diluted in mop water for cleaning house and protecting the home, a form of “marking your territory” that can also ensure that your spouse is faithful to you.

Connecting commonly known folk magical practices to place is one of the highlights of this book. Knot charms for healing or controlling various phenomena, for instance, are often connected to Maritimes Witchcraft, Mountain Magic, and New England Cunning Folk practices. God’s Eyes are sourced from native Huichol, Lakota, and Ojibwe folk magic. Fabric and cloth knots are common practices in Hoodoo and Southern Conjure. Or the paper poppets of Chinese American and Japanese American folk magic from the West Coast.

There’s also this really great section on the Devil, Satan, and the cultural connection of the Devil to witchcraft. This covers everything from the legend of a blues magician selling his soul to the Devil at a crossroads in exchange for musical fame and fortune to the Appalachian tradition of obtaining a witch ball (made of hair and wax) from the Devil for spellworking, or witches in the Ozark Mountains being initiated by the Devil. There’s discussion of the Devil or a Dark One figure in folk witchery as an archetype of the tutor, the mentor or sponsor, or the gift giver, but with the catch that he is a trickster. 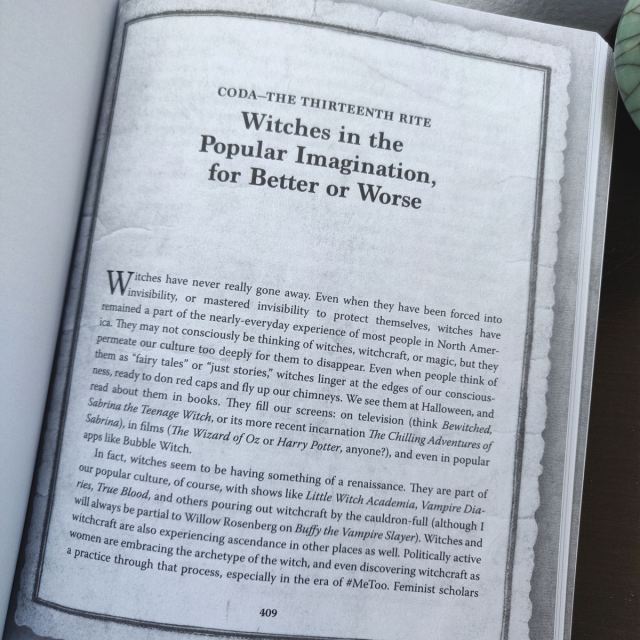 Finally, the book closes with cultural commentary on modern witchcraft, covering the Satanic Panic of the 1970s, and then again in the 1990s. Hutcheson covers the landmark legal battle that made its way all the way up to the California Supreme Court when Dianic Wiccan Z. Budapest challenged a San Francisco anti-fortune-telling statute. By the way, how important was that case to jurisprudence in general? Most every aspiring lawyer will have read about it in law school.

The cultural commentary on modern witchcraft takes us to present day movements by People of Color, especially Women of Color, finding power through witchcraft, citing Bri Luna (aka The Hoodwitch) on Instagram to the mainstream news reports of Witches of Color performing magical spells publicly to influence politics. There was also the infamous Trump Hex instigated by Michael M. Hughes.

In the 21st century, witchcraft also came to be adopted by radical feminists, in particular the feminist group W.I.T.C.H. (Women’s International Terrorist Conspiracy from Hell) who held up the image of the witch as the challenger against patriarchy.

The comprehensive dozen plus pages of Bibliography and the index in the end pages means you’ll be able to easily navigate further in-depth reading and jump between sections of the book based on your interest.

New World Witchery is an extraordinarily comprehensive collection of witchcraft and folk magical practices, with discussions ranging from region-based traditions, magical heritages, urban legends and stories, and artifacts to familiars, forms of divination, spirit communication, rituals and spells, the moon and moon phases in witchery.

Hutcheson cohosts the popular podcast New World Witchery. He holds a doctorate in American Studies from Penn State, with specializations in folklore, religion, and ethnicity. His works can be found in the Oxford Handbook of American Folklore and American Myths, Legends, and Tall Tales. His expert level of knowledge on the subject and cultural sensitivities shine on every page, whether you’re learning theory or practice from his book.

New World Witchery is a definitive, veritable reference book on the history and cultural practice of witchcraft in North America, ethnography and magical traditions, and will prove to be a valuable source of inspiration for your own personal endeavors into modern witchery.

FTC Disclosure: In accordance with Title 16 of the U.S. Code of Federal Regulations Part 255, “Guides Concerning Use of Endorsements and Testimonials in Advertising,” I received this book from publisher for prospective review. Everything I’ve said here is sincere and accurately reflects my opinion of the book.