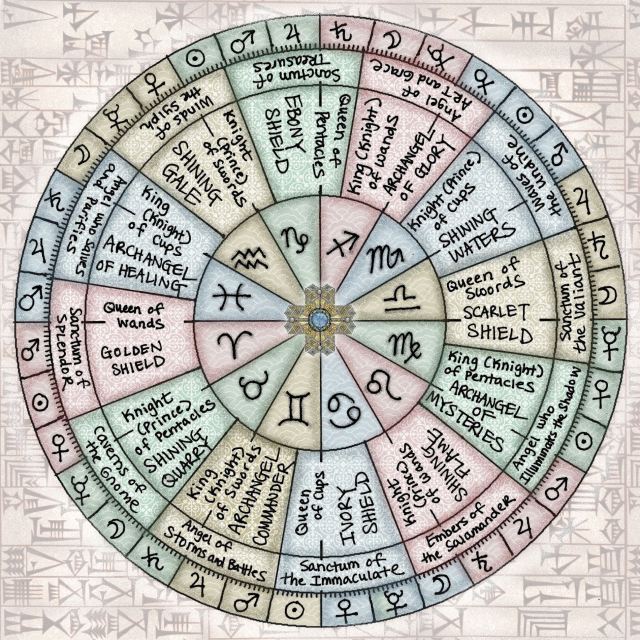 Crowley’s Book of Thoth assigns zodiacal domains to the Kings (Thoth Knights), Queens, and Knights (Thoth Princes). Each rulership begins at 21° and ends at 20°.

It’ll be fun to superimpose this over your birth chart to see which court cards rule over your natal planets and personal sensitive points.

I was inspired to create this reference chart when I went to include these court card correspondences in the Book of Maps (Revelation Edition). As I was doing so, I kinda felt in the back of my head, this is pointless. When it’s just words on the page, a little bit in each card entry section, scattered across the book, it’s really hard to make any constructive use of that information.

So I decided to input all of it in an easy at-a-glance chart. You can probably tell from the illustration that I did the line work by hand, and it’s handwritten. (God that wonky Aquarius glyph is bugging me!)

Where in your birth chart the four archangels rule will reveal four potential areas of mastery for you, due to innate gifts, talents, karma, and predestined abilities corresponding to the elemental attributes of that Archangel.

Like a dial, turn and align that chart with your birth chart to pinpoint where in your birth chart the Archangel of Glory governs, so look for the last decan, or last third of degrees in Scorpio to the two-thirds of the way in under Sagittarius. What planets and what key sensitive points are in that sector?

For me, I see my midheaven sign, Uranus, and black moon Lilith, in my tenth and eleventh houses. Think about what areas of life those houses govern, and how innate gifts such as creativity, an artistic touch, an individualist entrepreneurial spirit, and leadership qualities apply in those areas of your life, or to the aspects of you represented by the planets in that sector.

The first black and white line version was still kinda hard to follow, I felt. Like, it was a ton of information coming at you all at once.

All I did was add color coding, that’s it, and boom. Breakthrough. Suddenly, the chart was easy on your eyes to follow (I think).

Another example: Look up where The Ivory Shield governs in your chart. That’s going to be the last decan of Gemini through the first two decans of Cancer. Find that sector in your birth chart and note any celestial features there (planets, personal sensitive points, asteroids if you’re into that, etc.) and also note the astrological houses that align with that sector. You probably tend to approach these areas more intuitively than logically, and it’s here you tend to be more Queen of Cups, irrespective of what your identifying significator card may be.

It’s also fun to see which court card aligns with your sun sign, moon sign, and rising sign. You know how you interpret, say, a sun sign? Now, instead of interpreting it through its zodiac sign, interpret it through its corresponding court card.

My moon is in Leo, for instance. You can download this free PDF handbook all about moon signs here. In addition to considering my moon sign through Leo, now I’ll look at the governing court card. For me, since my moon under the decan ruler Mars in Leo, that’s under the domain of the Archangel of Mysteries.

In the SKT, I wanted to establish that you are all of the court cards. All of them represent different facets of your personality and govern over different areas of your life, which you can see when the above reference chart is superimposed over your natal chart.

The Princesses have no zodiacal attribution. Yet evidently they represent four types of human being. They are those numerous ‘elemental’ people whom we recognize by their lack of all sense of responsibility, whose moral qualities seem to lack ‘bite.’ They are sub-divided according to planetary predominance.

Yah, okay. So… here’s my translation of that…

The energies represented by the Pages/Princesses (in the SKT, the Heralds) are fleeting and transitory, and have not reached maturation. They’re like… energies in puberty.

Applying that core principle but expanding upon it with my own interpretation of that principle, the Heralds are always messenger spirits. When they appear, they come at the behest of a higher being, a divinity, immortal, ascended master, though it could also be an ancestor. The sender of the message, the one who’s watching over you but not making its presence known yet, is still withholding revelation of their identity. That will come later, when conditions have ripened. 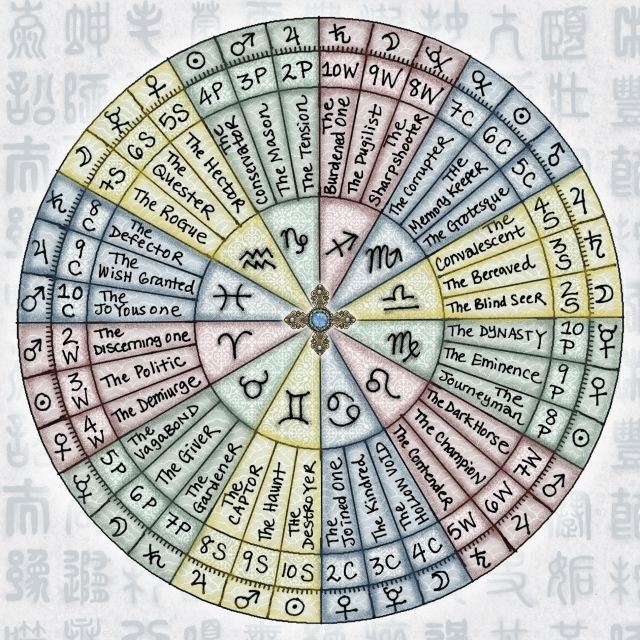 Here’s the other pip correspondences colored wheel you’ll find in the Book of Maps. Click on either of these two high-res image files to download them.

Each decan’s planetary ruler is noted along the outer-most rim. The inner-most rim is the zodiac sign. So, for example, 2W = Two of Wands, which in the SKT is titled The Discerning One. The decan rulership for the Two of Wands is Mars (see outer rim) in Aries (see inner rim).

Say that you know the decan ruler for your sun sign, and it’s Moon in Libra. Find that decan ruler on the wheel and note its tarot card correspondence, 2S = Two of Swords. In the SKT, the title is The Blind Seer.

Seven days ago I launched pre-orders for SKT: The Revelation through my newsletter so that subscribers could get at it first. Now it’s posted publicly on my website, linked below.

The last seven days have been a whirlwind over here. Both James and I each worked around 16 hours per day just to keep up with the pre-orders. The reception, the interest, and the support for my art has been overwhelming, humbling, and fully validating. Thank you. I cannot thank you all enough. We broke all sales records by leaps compared to the previous two editions and twice over exceeded our own sales projections/expectations.

The sweet messages many of you have left me in your pre-order e-mail meant I had a constant smile on my face the whole time I was doing intake and data entry of orders. As exhausting as the last week has been on our end, trying to keep up, it has also been a thrill, a joy, and fully gratifying. So much love right back to you all. ❤

10 thoughts on “The Tarot Courts and Your Birth Chart”