One of my favorite personal rewards from launching the Witchcraft Fundamentals course is the Google Group, where all of us are exchanging insights, asking tough questions, trying to answer tough questions, and getting to know each other. To give you a sampling of what that e-mail list-serv group is like, I’m sharing something I wrote on there in one of the threads started by a practitioner of both Eastern and Western metaphysics.

By the way, scroll all the way down for the PDF downloads of this post, which you can then print out and tuck into whatever reference manual for your metaphysical studies you have going on.

IN THIS WESTERN WITCHCRAFT COURSE, you’ll learn fairly soon that there are different systems of elemental-directional correspondences even within the umbrella of Western occult philosophy, and we cover three of them in this course:

The left two in the image above are from the end section of Chapter 1. You’ll cover the right-most correspondence in Chapter 10.

For those with a background in Western astrology, the left-most one (Agrippa) makes a lot of sense. The elements correspond with the zodiac sign associated with the equinoxes and solstices, and the directions come from the path of the sun per a geocentric model of the horoscopic Tropical wheel.

The wheel you see there is the Tropical Wheel in Western astrology marking the 12 sectors (imaginary lines we’ve made up) that the sun travels through in a calendar year. In the northern hemisphere, the sun’s path as we observe it from earth (geocentric model) moves into Aries, a Fire sign, around the time of the spring equinox, or March.
On the spring equinox, we say that the sun rises “due east” and sets “due west.” SOUTHERN HEMISPHERE NOTE: While the Point (Pt.) of Aries is the spring equinox in the northern hemisphere, it marks the autumnal equinox in the southern hemisphere. Your autumn equinox corresponds with Aries, Fire.
Then continues into Taurus, Gemini, and at the start of the period we designate for Cancer, a Water sign, the sun will be in Cancer and we’ll enter the summer solstice in the northern hemisphere. At this time, the sun is directly above the Tropic of Cancer on Earth, or the 23.5 degree North latitude (couldn’t figure out how to do the degree symbol on my computer keyboard). SOUTHERN HEMISPHERE: You’re in the winter solstice. Your Pt. of Cancer corresponds with the winter solstice, Water.
The tilt of the Earth’s axis and, as a result, what parts are exposed to the Sun and what parts are away from the Sun are the reason we have seasons. =)
It continues on into Leo, Virgo, and when it’s the autumn equinox, the sun enters Libra, an Air sign. During the solstices, the earth is tilted. During the equinoxes (“equi” = equal), no tilt, so that’s why we get equal amounts of day and night. SOUTHERN HEMISPHERE: When the sun is at the Pt. of Libra, you’re in the spring equinox. Your spring equinox corresponds with Libra, Air.
On it goes into Scorpio, Sagittarius, and when it enters Capricorn, an Earth sign, that’s our winter solstice. This is marked by the sun being directly overhead the Tropic of Capricorn, 23.5 degree South. SOUTHERN HEMISPHERE: The Tropic of Capricorn or Pt. of Capricorn marks your summer solstice, element Earth.
Hence, Wheel of the Year, aka Path of the Sun.

Heinrich Cornelius Agrippa lived between 1486 and 1535, with Occult Philosophy published around 1533 (there are several different publication dates attributed, since it was a series of books).

Guillaume Postel lived between 1510 and 1581, with Absconditorum clavis published around 1547. The center elemental-directional correspondence is per the Golden Dawn, and I sourced this info from Israel Regardie’s text, and he credits these attributions to John Dee.

In Taoist ceremonial magic, the majority view and most popular or common elemental-directional correspondence is as follows, illustrated in the below chart. 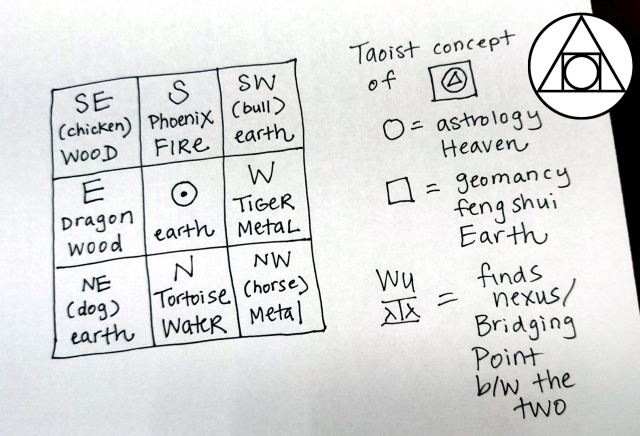 In Taoist metaphysics, we commonly reference the Huang Dao, which translates to Yellow Path, which is describing the Path of the Sun. Therefore, it aligns best with Agrippa’s method of reasoning for the elemental-directional correspondences since it is, in essence, the wheel of the year, marking the equinoxes and solstices However, yes, immediately you can see the discrepancy with the south between the Western Agrippa system and the Eastern Taoist system.

Although personally, I’m digging the phoenix mythology of rising from the ashes, and how ashes signify the aftermath of when Fire has transmuted into Earth.

However, in terms of modern practice, we now pretty much unanimously (sort of) observe that majority view configuration as illustrated. Even though the primary focus is on the four guardians and four compass directions, we don’t overlook the eight directions, forming the Ba Gua. Interestingly enough, you can see the influence of an agrarian culture in the animal attributions for the supplemental eight (southeast, southwest, northeast, northwest)—they’re the animals you’ll commonly find on a farm.

Some fun bonus info about the Eastern philosophical concept of Squaring the Circle (alchemical symbol in the West for the Great Work):

In Taoist metaphysics, the Circle signifies Heaven and is studied through astrology. Think about the horoscopic wheel and the theme of cycles when it comes to astrology, East or West.

The Square signifies Earth and is studied through geomancy, feng shui, and alchemy (both nei dan and wai dan, or inner alchemy and outer alchemy).

The witch, shaman, or ceremonial magician is someone who finds the nexus that can bridge the two, Heaven and Earth. This is someone who treads between both worlds, a messenger that crosses thresholds.

I do not try to fit the Wu Xing five phases into the Western four elements.

The conception behind the Western four elements is the reduction to some form of essential state of nature, which is fixed, at least until something happens to it and changes or alchemizes that state of nature.

The conception behind the Eastern Wu Xing or five phases is taking a snapshot of a moment of change. Wood is not a fixed state of nature; Wood is an expression of a state of change. It’s something changing into something and that changing phase is categorized as Wood.

So if we try to take the common denominator of the two concepts, the two do not align.

However, I do find that the Eight Trigrams can reduce down to a common denominator with the Western four elements. That’s probably exceeding the scope of this course’s subject matter, however. =)

This paragraph is my personal beliefs and perspective only: The elements are our perceptions of God’s or Divinity’s different emanations. Therefore, vantage point matters, and matters a lot in the same way if I hold up my left hand and say “left hand,” you who are standing across and opposite of me will need to make a minor adjustment of perspective, realizing that it looks “right” to you but you understand it’s objectively described as “left hand.” The reason we have so many discrepancies and conflicting systems when it comes to correspondences is exactly because we perceive the emanations of Divinity differently based on our very precise and unique vantage point.

Since this is a course on Western occult philosophy, we are studying Agrippa, Postel, and the Golden Dawn attributions as we take a decidedly academic and theoretical approach so that we can understand the fundamentals of Craft.

And that’s with any highly-specialized path of study. Jurisprudence and legal theory that you learn in law school is nothing like and nowhere near informative of what actual down and dirty practice of law in courtrooms and at negotiation tables are like.

In a course like this, I can’t tell you East is X, West is Y, etc. I can only tell you Person A says that East is X and West is Y; but Person B says that West is X and East is Y. Historically we have come to place Person A and Person B on pedestals and look up to them as authoritative figures on correspondences. As for what should you do in personal, private ritual space? Good luck. You’re on your own.

When I spent time in South America, I found that the Golden Dawn system (for me, intuitively) did not really work well when performing ritual magic on the land there. There’s the hemisphere difference, for starters. I found the Western elemental-directional correspondences to just not feel right, to feel a bit counterintuitive and counterproductive, and causing more trouble than facilitating empowerment (which is the whole point of ritual magic, and never lose sight of your objective, because as long as you have clear sight of your end goal, you’ll know immediately what adjustments to make as you journey). Oddly, I found Eastern ceremonial magic systems to work a little better there, I think in no small part because the training an Eastern ceremonial magician would get would start with “first, assess the land; connect to the land and let the land dictate your elemental-directional correspondence.”

When you learn Eastern ceremonial magic and Taoist occult philosophy, compartmentalize once again.

Then at an advanced level, that’s when you use discernment to reconcile all that you’ve learned into a cohesive, harmonized personal system of correspondences.

Join the conversation! Sign up for the course today!

Western Witchcraft I: The Fundamentals and Doctrinal Basis

10 thoughts on “Elemental Directional Correspondences in Ritual Magic, East vs. West: How Do You Reconcile Conflicts?”