If there is one Ciro Marchetti deck to have, it’s the Encore Tarot. This is the deck that fully showcases Marchetti’s talent as an artist, the consistent clarity of his vision, and evinces the magnificence of tarot art, taking what had been possible traditionally to new modern heights.

When future tarot scholars look back at our era, the one deck artist’s name I am very sure will come up time and time again is Ciro Marchetti. His style is so distinct, so unique that it has indelibly trademarked itself in the collective consciousness. I can spot a Marchetti deck by the artwork before knowing he was the creator, just as I (and all of us) can spot a Marchetti wannabe.

I’ve always been a huge admirer of Marchetti’s talent, though admittedly, in my own past I’ve been known to be ambivalent about digital art decks or, more specifically, new media art. But then that’s been a long-raging cold war in the arts community anyway– new media art vs. the old visual arts (or “fine arts”). 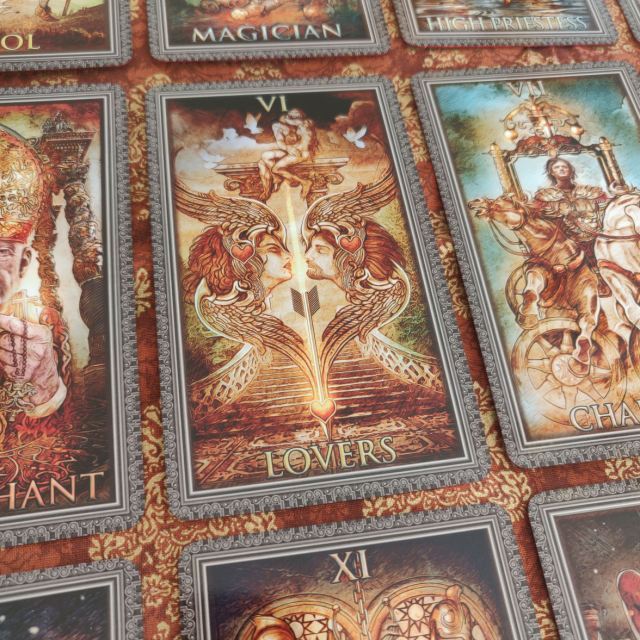 Marchetti is the new media artist who changed my mind. New media art is defined as art created by using digital technology, forms of digital art and computer-generated graphics. Old visual fine arts would be drawing by hand, painting, sculpture, in essence what is “hand-crafted.” However, these definitions can get a bit dysfunctional, especially when you get into hand-drawing with a stylus digital pen on a computer pad vs. hand-drawing with a pencil on sketch paper. 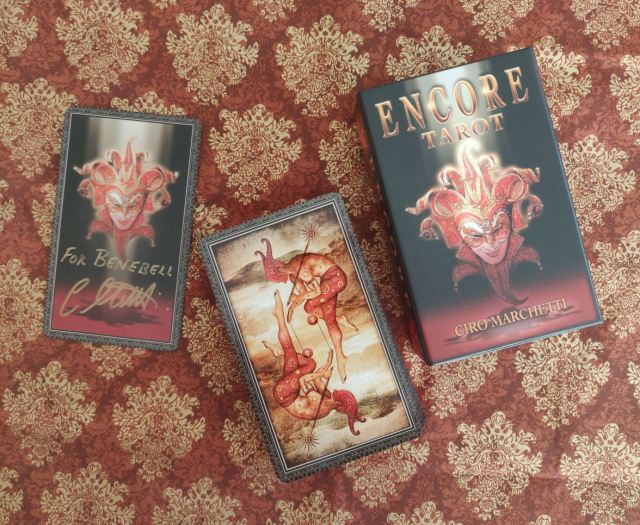 I’ll be exploring some of my ruminations on new media art vs. old visual art through a review of Ciro Marchetti’s Encore Tarot. This latest 2019 deck from his studios is breathtaking. It’s a “best of” ensemble from decks past, reworked into traditional line illustrations that temper classical and modern. I have never seen Ciro Marchetti better than this. It’s a luxe, rich, truly opulent deck, and yet easy to read with.

If you want to test-drive how these cards read, check out this pick-a-card reading I posted on Instagram here. Be open and receptive to hear what it is you most need to hear right now, pick a card– left, center, or right, and then read your message in the caption. You can then click on the right arrow to swipe over and see each card.

Message you most need to hear right now. This is #TarotTuesday and a #pickacardreading with the #EncoreTarot by #CiroMarchetti. Choose left, center, or right from the photo above, then swipe over to see the card you’ve selected and read the corresponding message from below. * * Left | Key XVII: The Star. * Before any ambition of advancing forward, take this time to restore health. Mend wounds and let nothing fester. To heal, first forgive. Perhaps who you most need to forgive is yourself. Do not look for blame; seek out the medicine. Spirit has sent blessings your way, but it comes in mysterious ways. To receive it, you must see it. The medicine is not in the shining star itself; the medicine is what the shining star illuminates. * * Center | X of Cups. * Happiness is not determined by the condition of your life, but by the result of healthy habits, emanating with compassion, and having a clear conscience. Happiness is a spiritual experience. Shift your priorities so that you seek immanence—to see the divinity in the material, physical world that already exists around you. What you hold in your hands does not need to be consecrated; it is holy and sacred as it is. * * Right | VIII of Coins. * Hone your craft. Do the work. The secret to success is persistence in spite of past failures. Disappointments do not deter you from trying again and again. Acquire knowledge, aim that knowledge at a worthy purpose, and then persevere. Your intentions are not enough. Let me see your hard work. Do not plan your results; plan your actions instead. Success comes when you resolve to do something and do it. * * #tarotreadersofinstagram #tarotofinstagram #tarotcommunity #tarotlove #tarotreading #taroteverydamnyday

The deck comes in a clamshell box with a magnetic flap closure and a red ribbon pull. The box is absolute matte, though the finish on the cards is high-gloss. I’m loving the metallic red edging as well. This is a self-published deck and Marchetti has gone with luxe, sturdy cardstock. I’m also loving the Divine Comedy-esque reversible card backs. 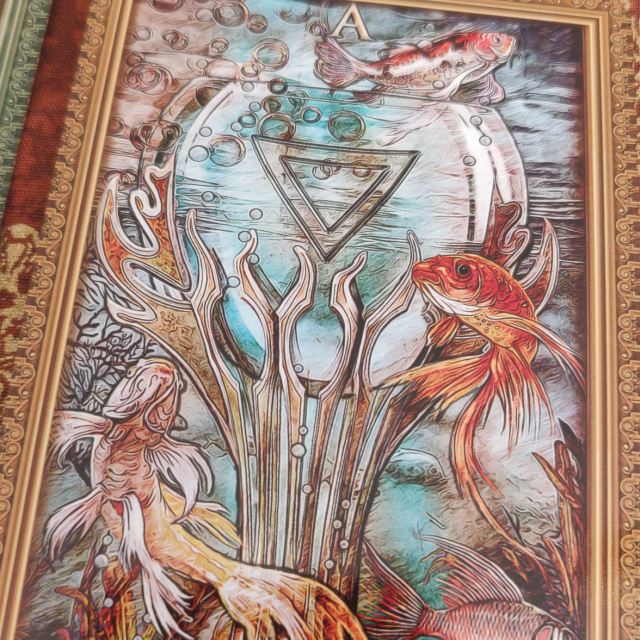 The level of detailing in Marchetti’s art is extraordinary, and what I love most about the Encore Tarot is the stripping away of the digital applications of coloring so now all you see is the indisputable proof of Marchetti’s raw talent.

Let’s start with the Major Arcana. Those of you familiar with my go-to format for deck reviews know I like to showcase the landscape of the cards in the order that they appear right out of the box, so that’s what you see here. 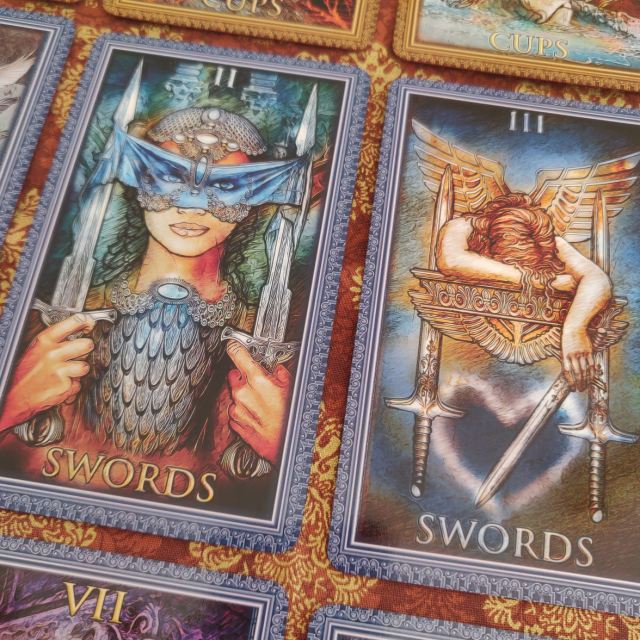 But I want to caveat that these photos do not do the Encore Tarot any justice whatsoever. This is a deck you need to look at close-up. It’s when you look at the detailing close up that you start to appreciate the signature Marchetti genius.

I love the color-coded frames as borders for the cards. They convey a sense of structure and cohesiveness to the deck, which is important since the images are actually sourced from multiple pre-existing decks that Marchetti created in the past.

The deck pays homage to the Rider-Waite-Smith in a way that renders it easy to read with. The myth and story element of Marchetti’s art amplifies your creativity and intuition. If you’re a fiction writer working on a fantasy, science fiction, or young adult novel, the Encore Tarot would be a phenomenal deck to read with for mapping out your plot or character development.

There are a total of 82 cards in this deck, 4 of them are “PL” cards added by Marchetti,or Palace cards. Palace cards designate the home of the four court cards in the suit. They can indicate the prevalence of that elemental energy in your present environment, external or internal, macro or micro. So here, the Palace of Coins might suggest an incubator for a business or financially profitable prospect.

The Palace of Swords could indicate a community formed around an idea or ideology. For example, the online pagan community, the online ASMR community, etc. Or perhaps it’s representative of an inner realm of ideas and intellectual developments. The Palace of Cups might indicate the domestic sphere, home or family as a collective hub.

The added Place or Palace cards make a lot of sense to me. The strength of Marchetti’s tarot art is in its world-building. That strength as far as I have seen it is unmatched. No one builds fantastical worlds into the tarot as well as Ciro Marchetti.

Tarot readers can be like writers– we can be snooty. In the same way writers like to draw this illusory line dividing literary fiction from commercial or genre fiction, we tarot readers do the same with decks. But on that rare occasion, a book or a deck comes along that is both– a crossover deck. Marchetti’s artistry as a tarot deck creator is top rate and he may very well have a keener understanding of the tarot than even he realizes of himself.

We snootier among tarot readers often say we prefer tarot art rendered in one of the old visual art forms whereas new media art decks are a little too quickly associated with commercial decks. This is a popular assumption that’s worth our while to scrutinize. What exactly is it about new media art (or digital/computer generated art) that gives us the impression that it’s easier or doesn’t have the same depth of artistic merit as fine art?

A new media artist is still using a stylus, or pen-like instrument, and manually drawing the line art onto a pad in exactly the same way a traditional pen and ink artist is drawing the lines onto paper. You either have an eye for depth shading or you don’t, regardless of which medium you’re using. You either know how to work with a color palette to communicate emotions or you don’t. I wonder if much of the prejudice comes from a lack of understanding of how computer-generated art is produced.

This is not a cut and paste job of public domain clip art. Marchetti’s line work, eye for detail, sense of balance, proportions, ability to convey depth perception, and perspective is unmatched in the tarot art world. There is a reason he is as well-known and as beloved as he is.

Take, for example, how he approached the color-coded borders. Plenty of deck artists have featured color-coded borders, but they rarely offer the balance and complement to the art as well as it is done here, and that’s credited entirely to Marchetti’s artistic discernment.

The borders feature just the right amount of color contrast, ornamental detail, and visual interest to be both captivating and yet not overpowering of the art itself. It takes extraordinary artistic talent to have such control and discernment.

Perhaps more than any constructed distinction between new media art and fine art is the debate over illustration vs. fine art.

Historically, tarot deck art would be considered illustration. I speculate that the lines blurred over time, especially as more serious artists approached tarot deck art as a form of fine art.

To me, the Encore Tarot as it stands in totality is a work of fine art. It’s also esteemed as masterful illustration. Marchetti has a gift for conveying the 78 ideas of the tarot in such a way that beginners can pick up any one of his decks and read fluently with it. He is ranked in the small minority of elite crossover decks that are both high concept and commercially appealing.

While this deck was gifted to me, it was not done so with any condition or expectation of a review. I’m writing this review because I want to share my awe.

Oftentimes tarot readers who pride themselves to be serious occultists overlook the Marchetti decks, but then if and when they do that, it’s only because they haven’t actually looked.