I’ve converted selected text from the Introduction chapter of Eliphas Levi’s Transcendental Magic: Its Doctrine and Ritual (here I’m using the English translation by A. E. Waite) into a much easier to digest reference table.

That is all. I’ll expound on this more at a later time. For now, those who know what to do with this, go forth and be merry; those who don’t care for this kind of thing, no worries! =)

Click on any of the tables for an enlarged view or to save the image file.

These are the powers and privileges of the man who holds in his right hand the Clavicles of Solomon, and in his left the branch of the blossoming almond: 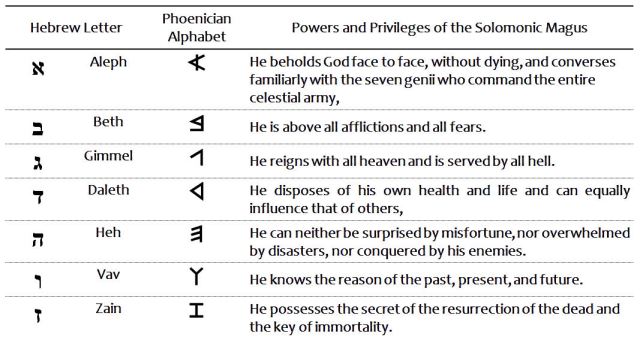 Here, it’s implied in Levi’s text that Aleph would correspond with Key I (Magus) of the Tarot Majors, Beth with Key II (Priestess), and so on. However, Waite adds a footnote in his translation to say that Levi is wrong in attributing Aleph with Key I.

So you decide how you want to approach the tarot Keys to Powers assignments. =)

Such are the seven chief privileges, and those which rank next are as follows:

These, finally, are the seven last powers of the magus: 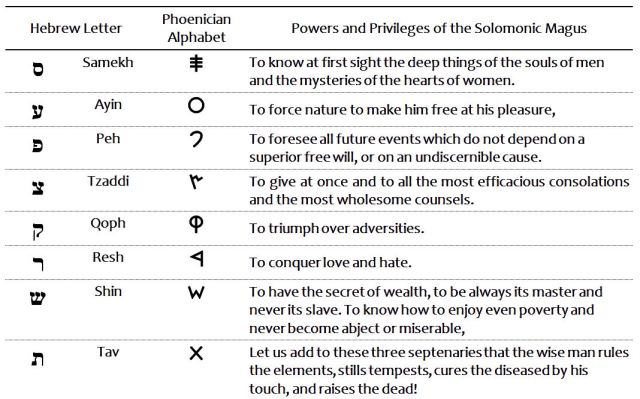 Yes, you guessed right. I’m trying to go somewhere with all this. You’ll see it in due time.

7 thoughts on “Eliphas Levi, Solomonic Magic, the 22 Powers, and the SKT Majors”