I ended up drawing two versions and hope you’ll help me out by voting on which one you prefer. I’m torn between the two because they go in pretty different directions, not just in the art, but especially in terms of interpreting the Queen of Swords. You’ll see what I mean.

I took inspiration from the Portrait of Olimpia Luna as Judith and Melchiorre Zoppio as Holofernes (1557 – 1602) by Agostino Carracci, pictured to the left above, and Judith (1892) by Jules LeFebure, to the right.

I started with a rough pencil sketch. Then went in with ink at a couple of different points. This helps me to visualize the final illustration. I don’t know why the multiple simultaneous entry points works for me, but it does. If I just start from one point and flesh out from there, something proportion wise always goes wrong.

Since drawing SKT, I’ve been honing my illustration techniques and trying to improve my line work. The human form has always been a challenge for me, and you saw that in the SKT deck art. But since then I’ve learned so much, which I’m applying now. =)

For reference, let’s take a look at the Queen of Swords from (left to right above) the Sola Busca Tarot, the Rider-Waite-Smith, and the Thoth. I knew I wanted the Judith vibe, side profile facing right, like in the RWS, the sword for me had to be raised with blade pointed up, I wanted the crown, and I wanted to include a butterfly.

She’s most certainly a familiar Queen of Swords in the sense that no caption is needed for any tarot reader to immediately identify this card as the Queen of Swords. Or at least that’s my impression. In contrast, you’ll see later that Version #2 isn’t that way at all. Your first impression for Version #2 might not be “Queen of Swords.” 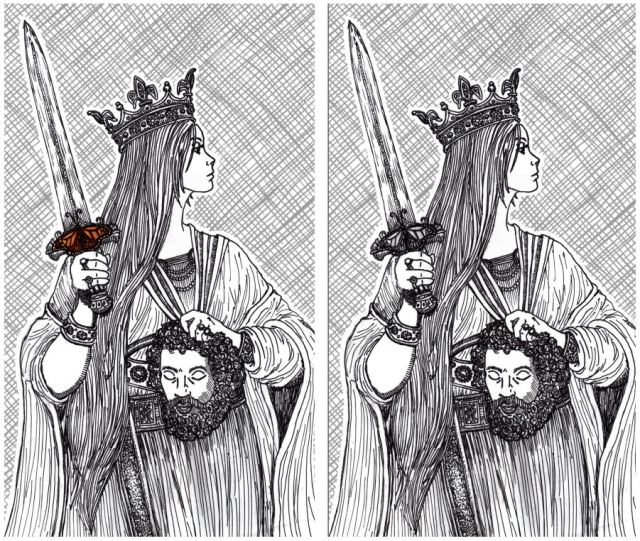 I tinkered with the details, like should I color in just the monarch butterfly on the sword’s hilt? How about the cross-hatching in the background? Should I go darker or lighter? By the way, the cross-hatching was added digitally after-the-fact. You’ll see later because I’m also providing the original sketch for download.

The above is my completed Version #1 for the tarot deck project. I decided to go with black and white as this little way of nodding to my own SKT deck, First Edition.

And here is the little write-up for the Queen of Swords I submitted:

Take no prisoners! There is no way out but straight through. Endure and overcome the adversity. Act like you know what you’re doing and the motions will create the reality.

Victory is not decided on the battlefield. It is decided before the battle. You must know what your strategy will be. Your preparation and mindset will determine the outcome.

Under no circumstances will you ever let anything or anyone break that spirit of yours. Your spirit has always been and will always be your secret weapon.

We were also to submit an artist statement, so here’s mine:

The form of this Queen of Swords was inspired by a combination of Agostino Carracci’s “Portrait of Olimpia Luna as Judith and Melchiorre Zoppio as Holofernes” (1557 – 1602) and Jules LeFebure’s “Judith” (1892). Medium used is pen and ink. Benebell Wen is the author of Holistic Tarot (North Atlantic Books, 2015) and the creator of the Spirit Keeper’s Tarot deck.

Oh, and for those who might want to create their own prints or other fun things with my Queen of Swords drawing, here’s the high-res image file:

This work is dedicated to the public domain. That means you can copy it, make copies, use copies, create your own version or derivatives of the work (e.g., print it out and color it), and pretty much do anything you please with my illustration, commercial or non-commercial. Although you have no legal obligation to credit me, I do love getting credited, so when you remember, please give me a shout-out. =)

I also love seeing your creativity, so if you do something with this Queen of Swords illustration, or even if you simply decide to create an art print of it and hang it up in your personal space, please share it on your social media and tag me on Instagram @bellwen or on Twitter @tarotanalysis.

While in Sendai, Japan, the Hubby J passed by a small shrine for Kuan Yin (Kannon). It was late and I had already called it a night, retiring back to the hotel. J continued his walking adventures, saw that, snapped a pic, and sent it to me. He said according to the inscription below the statue, it was Kannon, or Kuan Yin.

A manifestation of Kuan Yin wielding a giant sword (I’m guessing here, but it’s most likely supposed to represent the Sword of Knowledge)! Now that’s something!

It reminded me of a Queen of Swords, so it’s that statue pictured above that inspired by second version.

Those familiar with the classical textbook meaning assigned to the tarot Queen of Swords and those familiar with the attributes of Kuan Yin are going to scratch their heads and wonder how I could possibly think the two go together. (I mean, Her usual manifestation is certainly more Cups-y.) Well.

I opted for an androgynous Kuan Yin. In terms of where we are today as a collective society of tarot readers, how we read court cards don’t really fit into a gender binary anymore. I think we should recognize that historic aspect of interpreting the courts, but likewise we should acknowledge how interpreting the courts has evolved. So to me, depicting the Queen here through androgny is part of the artistic commentary.

Then a mythic-size sparrow with wings outstretched hovers protectively behind Her left shoulder. While I personally cannot fathom it, sparrows are often regarded as vermin or pests. In fact, there was a period of China’s history in the 50s when the government literally implemented a movement to kill off all sparrows in the country because sparrows were considered that much of a vermin. Kuan Yin is perhaps best known for Her compassion, love, and mercy toward the lowest ranking members of any society, the rejected, the derelicts and untouchables, the castaways, and the pariahs. She protects the sparrow, and the sparrow in turn protects Her.

To Her right is a butterfly emerging from its chrysalis. Back in August, Hubs and I raised a few caterpillars, watched them form their cocoons, and emerge as butterflies. You can see some snapshots and videos here (of their transformation), and here (emerging from the chrysalis and becoming butterflies), and here (when they were ready to be released out into the world– can you believe how high these little guys can fly?).

I do feel like this artistic interpretation of the Queen of Swords requires quite a different card description from Version #1, so here it is:

You have had to know suffering and you have felt isolated because of that suffering. You have been lonely and the pain has been intense, but do you not know about the extraordinary power you wield?

Your spirit has been forged from fire, pressure, and the worst of the grind. It is only through your suffering that you might anneal into the full potential of your strength. Do you not know what you hold in your right hand?

It is the Sword of Knowledge that cuts away false beliefs and illusions. It is with the Sword that you will recreate the world you live in. The change you seek will happen once you take control of your mindset. Cut the chords of attachment that have been holding you back and rise up to stand independent, fearless, dignified.

So where do you go from here? There is no right or wrong path. There is only the path you choose.

Here’s the Artist Statement to go with Version #2:

The form of this Queen of Swords was inspired by a statue of Kannon (Kuan Yin) at a local shrine in Sendai, Japan. Original art done in pen and ink, then digitally remastered to sepia tones. Benebell Wen is the author of Holistic Tarot (North Atlantic Books, 2015) and the creator of the Spirit Keeper’s Tarot deck.

Oh, and for those who might want to create their own prints or other fun things with my Queen of Swords drawing, here’s the high-res image file:

This work is dedicated to the public domain so please feel free to do as you will with it. You can create a derivative of it or upload it as-is onto a print-on-demand site to produce your own art prints, stationary, stickers, or anything at all.

I also designed the image and the corresponding message into a two-sided business card thing to keep in your wallet. You can order a bunch of these cards and gift them out! It’s a great little thing to keep as a personal reminder when you most need to hear the message.

WALLET CARD: FRONT SIDE | BACK SIDE 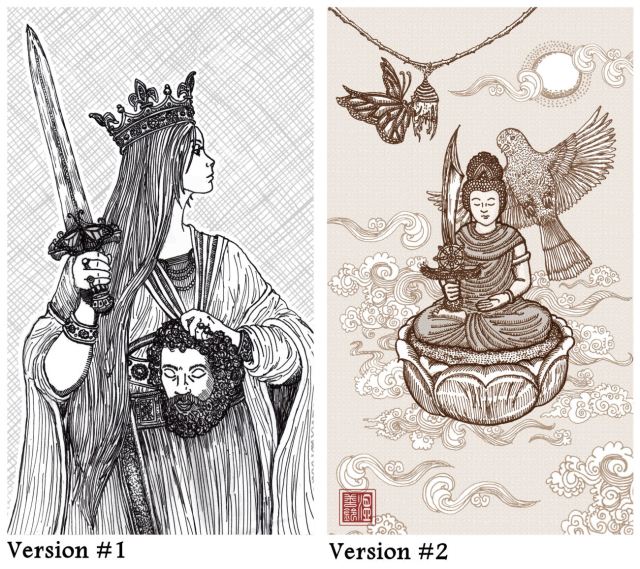 Which one do I go with?

Help. Which one should I submit for the CoT Community Tarot deck?

You see what I meant, right? They’re so different! Argh! I can’t choose!

EDIT: I added a touch of color to the butterfly on Version #1. Does that change how you feel about it at all? 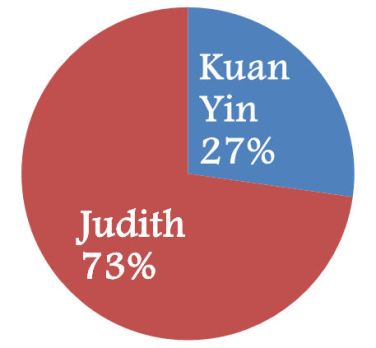 However, you can download the high-res image files for both above and both are in the public domain for you to do as you will. =) I love seeing your creativity, so a free way to give back is to share that creativity on social media and tag me so I see it. =)