SOLD OUT. This deck is now out of print.

The narrowly-tailored premise of Spirit Keeper’s Tarot is to transform tarot keys into calling cards for accessing a spirit world of beneficent immortals.

The artwork is original black and white line drawings done by hand, by me, in pen and ink, then digitally remastered to monochromatic sepia tones. The cards are bordered with a tea-stained parchment design.

All decks will be anointed with hand-crafted holy anointing oil made of Ceylon cinnamon, cassia cinnamon, myrrh resin, and sweet lemongrass. 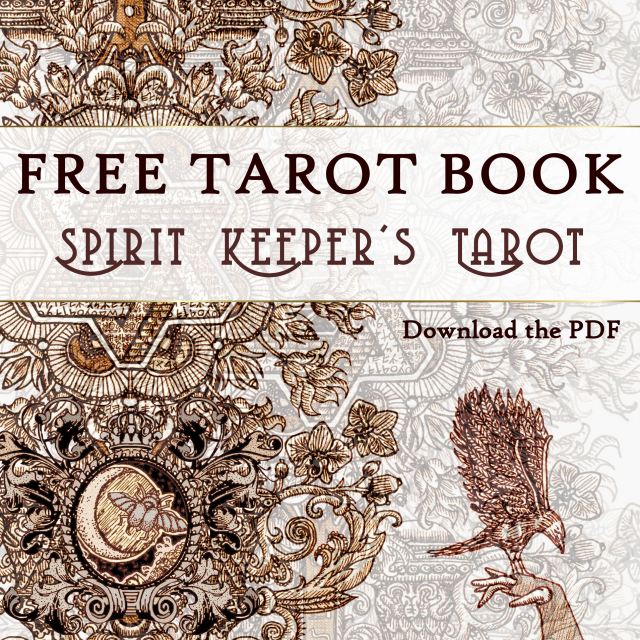 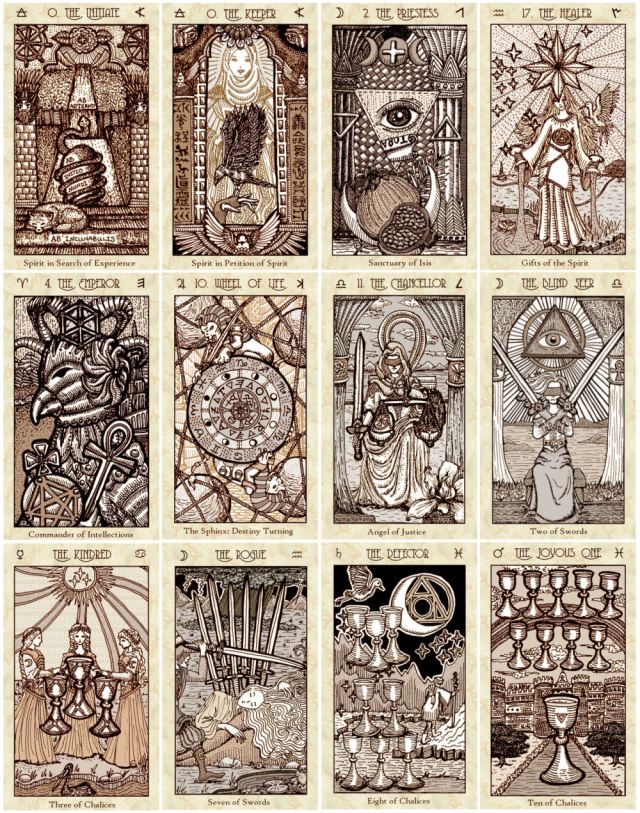 While the First Edition SKT deck was in black and white, a largely faithful scan of the original line drawings I did by hand, the remastered Vitruvian Edition is in monochromatic sepia tones with redesigned architecture.

The namesake for this edition comes from Vitruvius, who lived around 80 B.C. to 15 B.C. Vitruvius was a Roman architect who taught that every structure must exhibit three qualities: stability, utility, and beauty. These three qualities have come to be known as the Vitruvian Triad.

A millennium after Vitruvius, Leonardo da Vinci was inspired by the Roman architect’s works. One of da Vinci’s most famous sketches–rendered in sepia ink–is the Vitruvian Man (1487).

We will place our print run order based on the number of pre-orders we get plus a couple hundred extra to spare. That’s it.

After this print run is sold out, we won’t be reprinting. Even if a future SKT deck happens, it won’t be for many years and it will be different from this version. SKT will not be handed over to a mass market publisher anytime soon, either.

All Decks are Anointed

I craft my own anointing oil from essences and macerated oils I make myself from raw ingredients painstakingly sourced to ensure quality. The Ceylon cinnamon bark was purchased at the Grand Bazaar in Istanbul, Turkey. The cassia cinnamon leaf was imported from India. I use whole, highest grade myrrh resin (tears of myrrh) and lots of it (because making your own true essential oils requires a lot of myrrh). The lemongrass is fresh, local produce that is personally sun-dried over several months before the oil-making process even begins. And then the oil making process takes another several months before they’re ready. The olive oil is from Athens, Greece. Multiple layering of astrologically-timed ritual work is crafted into the anointing oil.

A Companion Course, Free and Online

In addition to that video series already freely available, I will be producing another set of videos to go along with this redesigned deck, with new content tailored around the aspiration to make this deck more intuitively accessible so that you don’t feel like you need to be anybody other than yourself or to know anymore than what you already know (or are willing to learn) to gain access to all that this deck can offer.

The set of videos that went with the First Edition deep-dived unapologetically into mystical realms that required the suspension of rational skepticism, i.e., we were talking about your Holy Guardian Angel, ritual magic, angels, demons, the Akashic Records, and that kind of thing.

The new set of videos will be more practical and applicable to everyday readings. How do you interpret SKT court cards in readings? How do you actually and effectively integrate basic beginner-level astrology with tarot readings, using the astrological correspondence system that the SKT deck follows? How do you use your deck and Book of Maps together to do an I Ching and tarot divination?

The Book of Maps

Only the $65 Premium Package will come with the Book of Maps companion guidebook to the deck and it’s just a PDF digital file.

There’s also an additional 230+ pages to this revised edition of the Book of Maps. The new additions will include more on how to read the SKT court cards, working with the Olympic spirits, integrating astrology with the tarot, integrating gematria with the tarot, and an entire reference section on using the tarot and I Ching divination together. You will be able to look up short form I Ching oracles based on your SKT tarot card readings by consulting this Book of Maps. No additional I Ching texts required.

I will be sending progress reports, important updates, and everything related to your order of the SKT deck by the mailing list linked here: www.tinyurl.com/SKTnews.

From now until the pre-order window closes, I’ll also be sending exclusive previews, maybe some freebies, and who knows what else through that mailing list only.

Whether you’re just interested in staying up to date on the progress of the Vitruvian Edition or you’ve already pre-ordered your deck, get on this mailing list!

This isn’t some promo marketing thing. It’s 100% a my convenience thing. I can easily, by one click, send out notices to everybody who has consented to receiving e-mail notices and don’t have to keep track of or keep on updating any manually created email lists.

This edition is going to be the last SKT print run for a very long time… years, or maybe even never.

We are going to place a production order based on the pre-order quantity, plus some hundreds to spare and sell until they run out. And then that’s it.

We are not going to reprint this version of the deck. We might consider reprinting new versions of SKT way, way down the line in the future, for a possible five-year anniversary or ten-year anniversary special. In fact, there’s even the chance of never.

SKT will not be handed over to a mass market publisher. Maybe when J and I are so old and feeble we can barely hold a pen to write our own names, we might at that point give SKT to a publishing house, but it won’t happen anytime soon, so please don’t hold out for what you hope will be a cheaper version of the deck in two years.

Please e-mail your inquiries to abelldelivers@gmail.com.