The Game of Thrones Tarot. If you watch GoT and you’re a tarot reader, I’d be shocked if you didn’t get this deck. So many of us were salivating while waiting for it after the first preview photos surfaced on the interwebs. Plus, the production quality is spectacular for the price.

I love that the creators went in the direction of hand-drawn (or at least it has the appearance of hand-drawn) illustrations rather than photography. Had this been a photography deck, I wouldn’t have bought it. I love the correspondences here, meaning which characters are assigned to which keys.

The deck set comes in a beautiful flip top box and the packaging is collectors-worthy. Love the card back design. 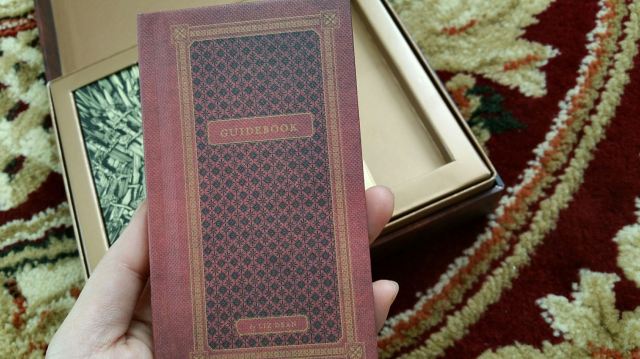 The Guidebook is written by Liz Dean, which means you know it’s good. She’s one of the leading voices in contemporary tarot. And I love how they designed the book, too. It’s hardcover and mimics a medieval illuminated manuscript.

If you want to check out the close-up of the cards, click on any of the linked photos. The cardstock is this really beautiful knitted or woven canvas type stock (I don’t know the tech terms) and is slightly muted rather than bone white. I love it.

I’m intrigued by the change of the Wands suit to Spears, similar to Lances, which are attributed to Fire and I think is a great replacement for the suit of Wands here for the GoT deck, so I love that detail. Well done.

For the most part the imagery follows the Rider-Waite-Smith, which makes this deck really easy to work with for RWS readers. Yay. When the preview images first came out, only the Majors were shown, so I was afraid they’d go lazy on the Minors (which a lot of art decks do, case in point, the China Tarot or the XIII Tarot by Nekro), but no. Thank goodness no. The creators delivered.

Here’s the funny thing. For “serious” tarot readings, I generally avoid decks that get pop-culture-y or are based around a kitschy theme. Sure, I collect a shitload of such decks, but wouldn’t use them for a reading I cared about. But I actually love the Game of Thrones Tarot. It shouldn’t work as a serious reading deck and yet it does. I think it’s the art. The art is just spectacular. Conceptually my presumption would be this deck can’t work for a professional reading, and yet I think it does. It reads very well. That’s the funny thing.

The illustrations done by Craig Coss are so good, it made me want more tarot decks by this guy. I went out of my way to see if he illustrated any others. Sadly, all I found was a Goddess Coloring Book. Here’s me sending out a wish to the universe that the big tarot and oracle publishing houses take notice and hire this guy to create more decks.

I admit being a bit…what’s the word…head-scratchy at how none of the main characters from Dorne are depicted, I do think some of these images are supposed to represent the Unsullied (like the ones where the backs– maybe the Page of Spears?– are turned so we don’t get to see faces), also no Khal Drogo (unless he’s here and I just can’t identify him from the illustrations?), not sure which are depictions of the Dothraki, no Missandei, and no Grey Worm. Daww. But hey. The Game of Thrones universe is vast and diverse, so can’t expect to get depictions of everybody. 😉

There was no way I wouldn’t be getting this deck, and I’m happy to report that the deck delivers. High quality production, beautiful art, every detail here made for the tarot aficionado and deck collector. Obviously, you need to get two copies, right? One to open and use right now and one to leave in original packaging for the future? 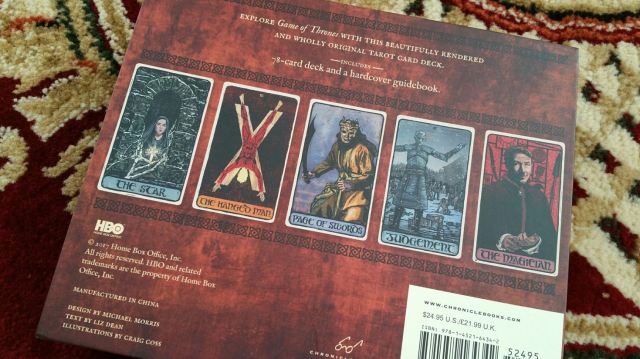 I confess not being able to comment much on the actual guidebook since y’all know I just got this deck to go, “ooh, pretty!” That said, Liz Dean is top notch in the tarot world. HBO and the publishing house could not have gone with a more fitting author to write the guidebook for the Game of Thrones Tarot.