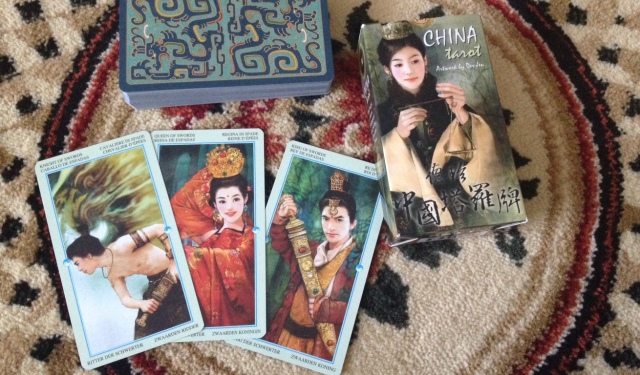 Of course I had to review the China Tarot published by Lo Scarabeo. Of course. It is an art deck that features the paintings of the classically trained Taiwanese painter Der Jen (德珍; Dé Zhēn), which was her artist pseudonym. Her real name was Ching-Yi Chiang (江慶儀; Jiāng Qìng Yí). [Note: It is the late Der Jen; she passed on in 2012, just 3 days before her 38th birthday.]

She paints in the traditional and romantic Chinese fine arts style called 中國風 (Zhōng Guó Fēng), which translated directly would be “China Wind,” though I don’t know what the best English translation for the style would be. It was always her objective to bring the Zhōng Guó Fēng art style to the international stage, and she most certainly achieved that through the China Tarot deck publication.

Der Jen sought to “write poetry” through her paintings. She intended her work to be poetic and that she accomplished. Just look at the art in this deck. You can read more about her or browse a gallery of her works here, though the website is in Chinese.

When describing herself, she has used Western astrology, saying that although she’s an Aries, she really sees herself as more of a “Capricorn-Pisces mixed soul” (my best attempt at the translation…), an equal yet tenuous balance between rational and emotional. 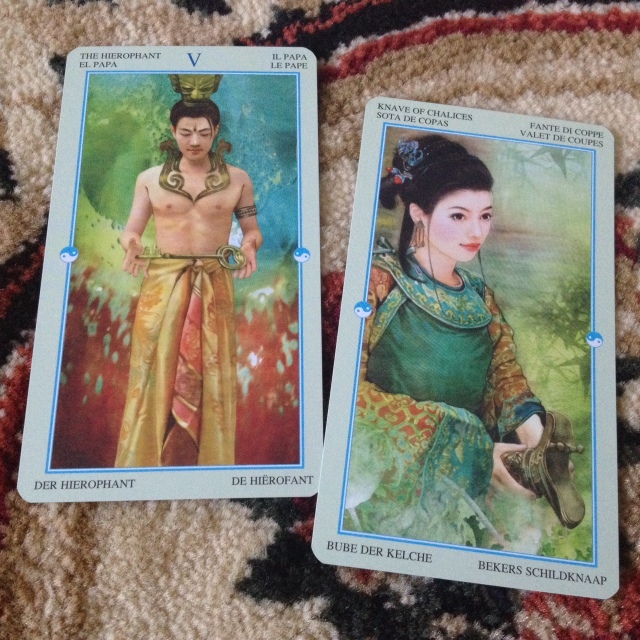 You can see that in Der Jen’s art. It’s technical perfection, and yet it’s rich with emotional expression. Also, an interesting observation: many of the women depicted in Der Jen’s art are almost self portraits. See the above Page (or Knave) of Chalices, for instance, and the below photograph of the artist.

Many of Der Jen’s physical features and also her personal demure demeanor is reflected in her portraits of women. 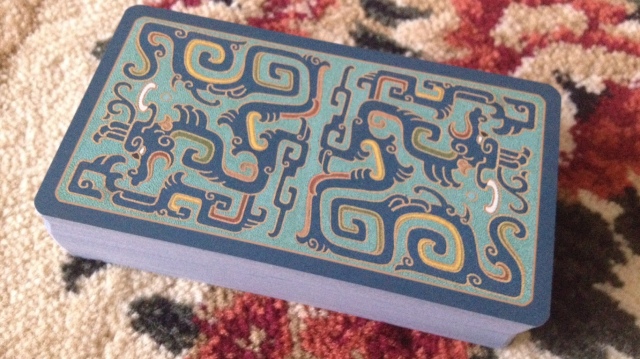 For the China Tarot, the card back design doesn’t really do anything for me, though it is reversible and thus renders the deck easy to use for reversal readings. I don’t know whether the art here is Der Jen’s work, a derivative of art she’s done, or publisher-designed to go along with this art deck. I will say that it does seem to diverge from what I’d consider Der Jen’s typical artistic style and doesn’t have the technical mastery or balance you’d see in her other works. 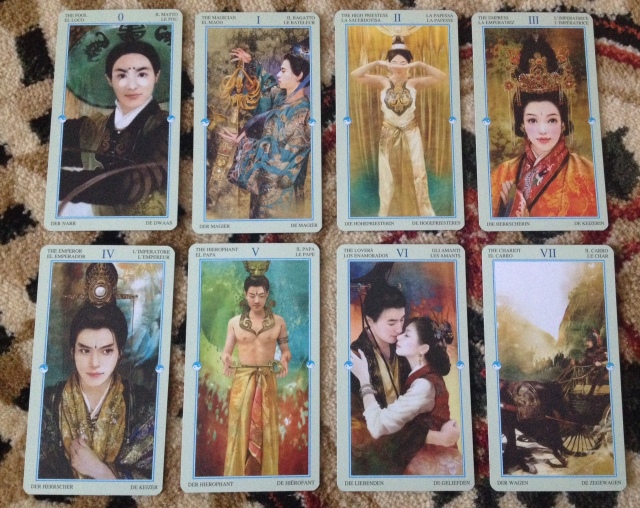 With the genre or category of tarot art decks, you’re not going to get perfect cookie-cutter fits between traditional tarot symbolism and the art. Instead, the art in the deck is typically taken from the artist’s portfolio and assigned to a specific tarot card that just happens to match the expression of that work. Given that context, the matches were pretty good. 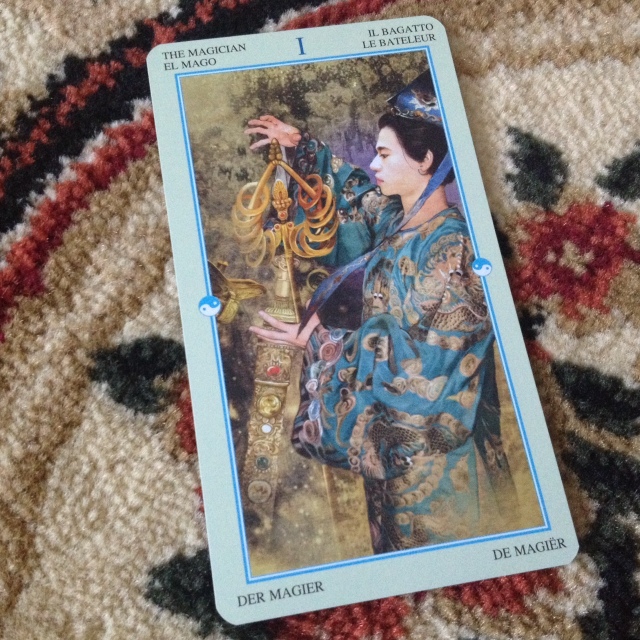 Some minor digital additions were done to ensure the tarot iconography fit. For example here in The Magician, the symbols of the four suits are included. 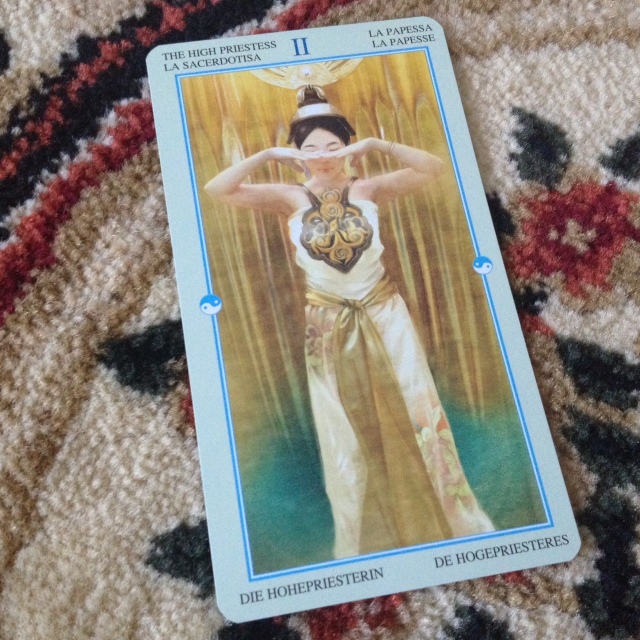 It wasn’t clear to me whether the artist created any works specifically for the China Tarot or whether all art pictured are from her portfolio. 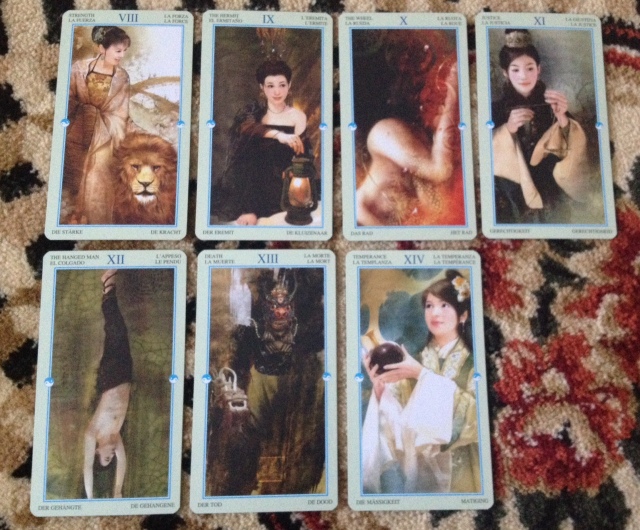 It doesn’t really matter to me because it all works seamlessly and whatever the back story, the art fits. See Key 8: Strength below, or Key 11: Justice (following the RWS key numbering here). I love Key 13: Death here. 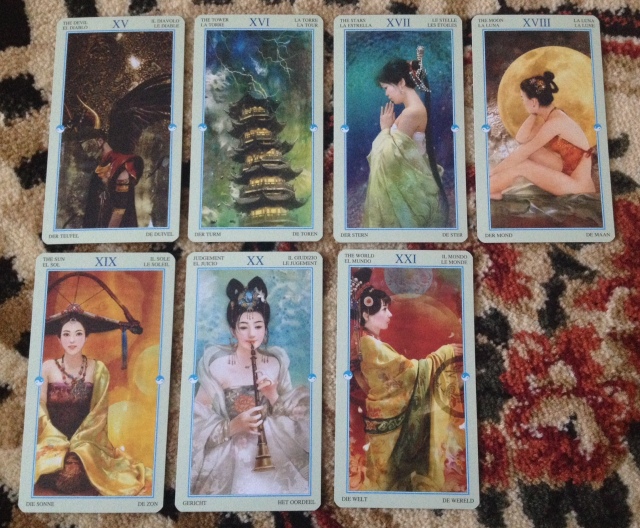 The Tower card is a toppling pagoda. Love it. One of the signatures of Der Jen is her romantic, realistic, and beautiful depictions of Asian women. It was a subject matter she loved to work on and did masterfully. It’s what she became known for. You can see it in many of the cards above from the third septenary of the Major Arcana, and also in the courts. 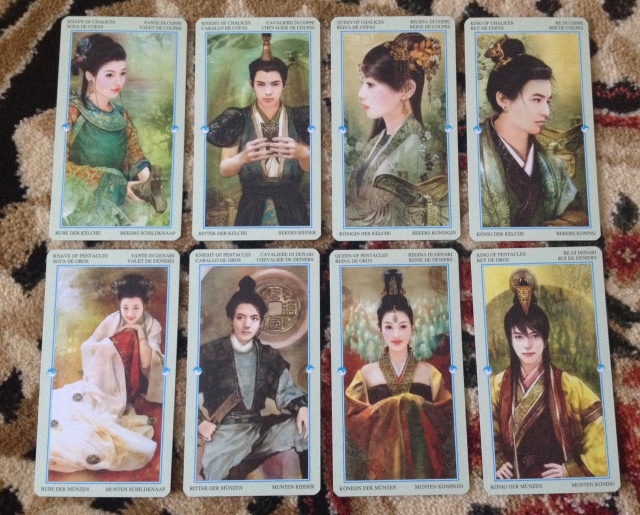 Above you’ll see the courts for the passive suits, Chalices (or Cups) and Pentacles. The China Tarot has some of the most beautiful Knaves and Queens I’ve yet to see in a tarot deck. 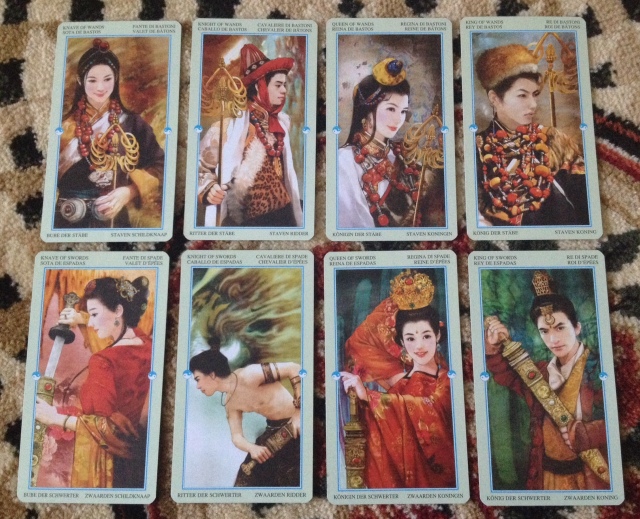 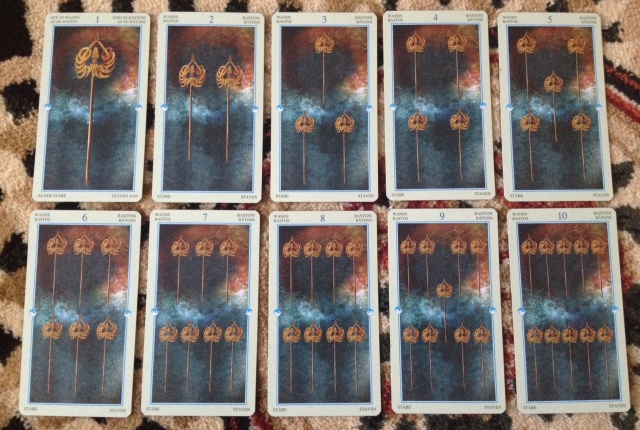 The deck appears to be a hybrid, with the RWS ordering of the keys in the Majors (i.e., Key 8 is Strength and Key 11 is Justice) but then we have un-illustrated pips in the style of Marseille decks. 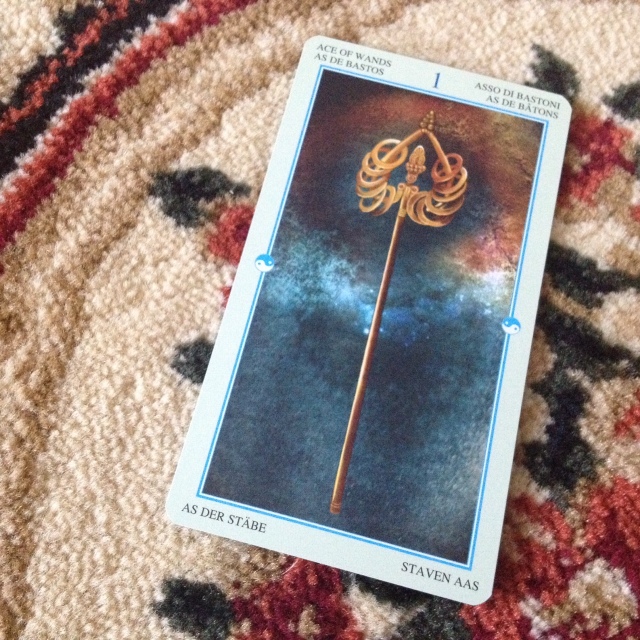 Here, the suit of Wands is stilled called the suit of Wands, but is illustrated with traditional Chinese hair pins. I’m not sure whether divinatory uses for the deck was intended. In typical Marseille-inspired tarot decks, even with un-illustrated pips, the formation of the suit icons tend to be deliberate, intended to evoke certain intuitive messages. Here, I don’t get the sense that much metaphysical thought was given to the formation of the suit icons. 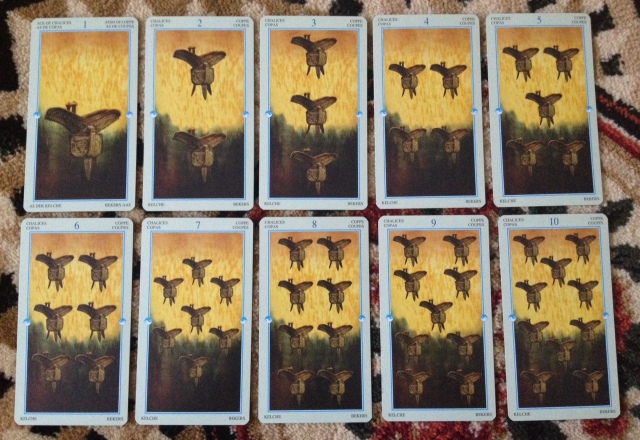 In the suit of Cups, or Chalices as it’s referred to here, we see traditional Chinese imperial wine chalices.

So far in both the suit of Wands and suit of Cups, you’ll see the same exact background and similar use of space for the cards. Therefore color symbolism goes out the window in terms of what a practitioner might use for interpreting the pips. There is no use of background space to convey certain metaphysical attributions that each of the cards might have. Thus, the pip cards feel like an afterthought in putting together this tarot deck. 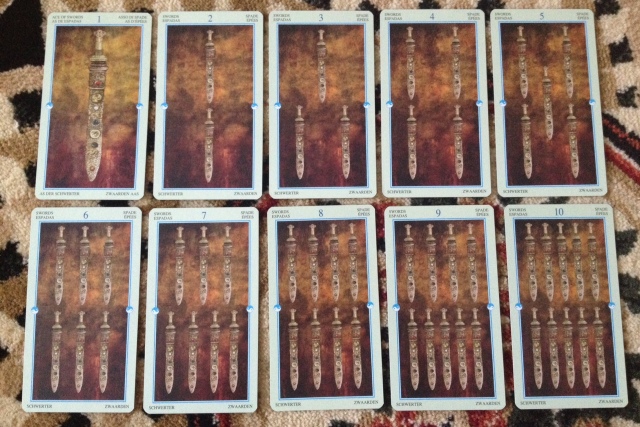 Moving on, the suit of Swords is depicted by bronze Chinese swords from China’s Bronze Age. In terms of reading tarot with this deck, I would rely heavily on recall of numerology and the elements. Western astrology would feel a bit off, given that this is the China Tarot and if any astrological system is to be used, it mind as well be Chinese astrology. Has anyone ever even reconciled Chinese astrology with the tarot? I don’t know. 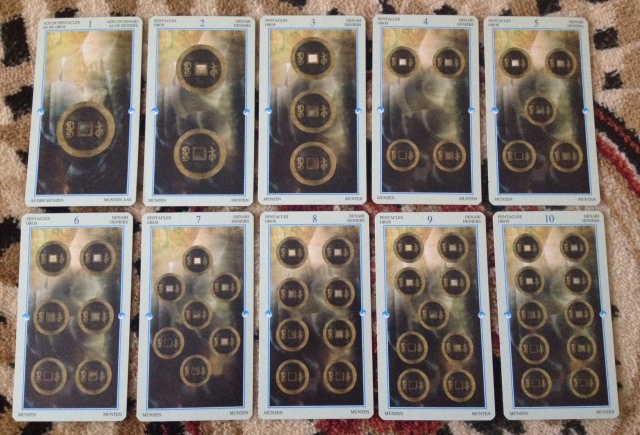 For the suit of Pentacles, we have Shang Dynasty coins (I think). It’s also facing the side of the coin that’s traditionally associated with “tails” for I Ching divination, or yin. Yin, passive energy, works here, given the Earth attribution, which is a passive element. Not sure if that was intended or just a cool fluke. 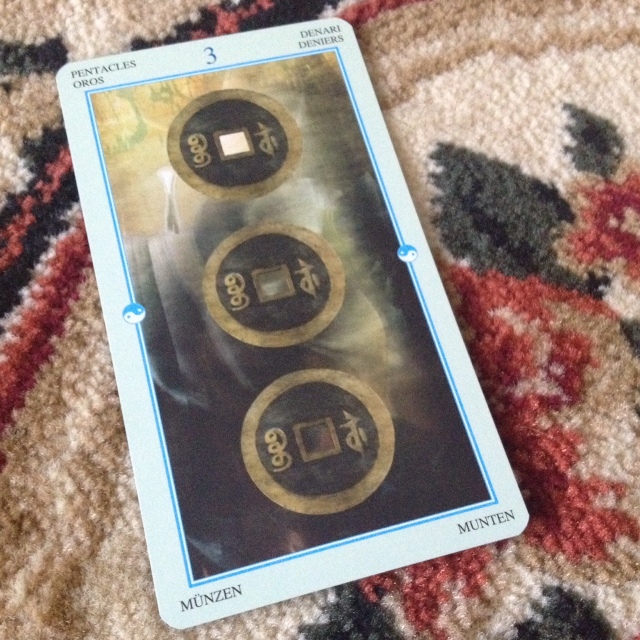 Now for the little white booklet (LWB). Three spreads are taught here and there’s quite a bit of intro-to-tarot info packed into this LWB. In typical Lo Scarabeo style, the LWB is in a bunch of different languages, just like the titles on each card. Other deck reviewers have noted how it’s distracting, but I don’t mind the multilingual titles.

I’m slightly amused that Chinese isn’t one of the featured languages in the LWB or in the card titles. I mean. It’s the China Tarot, featuring a Chinese/Taiwanese artist’s oeuvre. And yet no Chinese on any of the packaging anywhere? [Exception: Other than on the front of the box in Chinese calligraphy, which reads “China tarot cards” in traditional Chinese, 中國塔羅牌 (Zhōng Guó Tǎ Luó Pái), and “Der Jen,” 德珍] 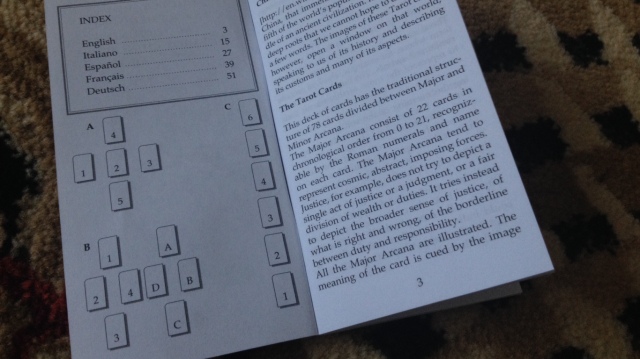 Anyway, back to the spreads. Of course I had to try out the Tai Chi Chu spread, the most Asian-y sounding spread they’ve got. 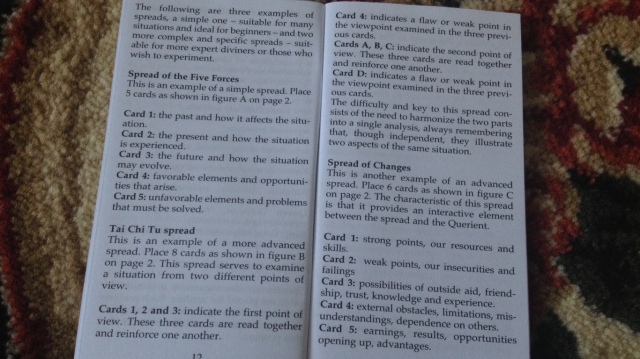 Also it’s an advanced spread, apparently, so yes let’s definitely check it out. Instructions for the spread provided in the above photo snapshot of the LWB. 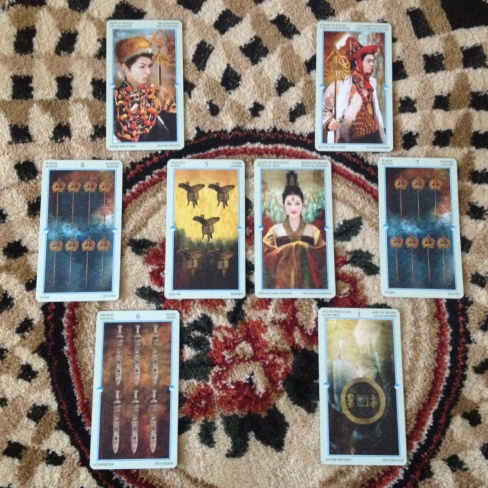 I won’t even try to front about it. When reading with this deck, I resort to memory recall of the RWS card meanings. The Eight of Wands and Six of Swords is an interesting juxtaposition. Along with the King of Wands and Knight of Wands up top leading into the weak point, and given the position meaning for where the Queen of Pentacles is and how it’s next to the Five of Cups, I may read her as I would had it appeared in reverse. As a reading for myself, I see this as showing an area of tension in my professional plane and two oppositional points of view coming to head. 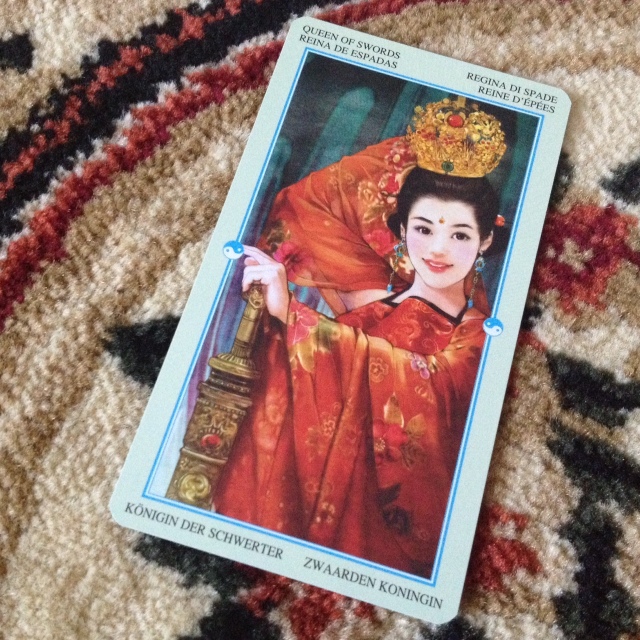 Again, six languages featured on each card of the China Tarot and not a single one is Chinese or even an East Asian language. Amusing.

As a reading deck, I’m not likely to use it. However, lots of leeway is given on the technicalities of tarot structure when it’s an art deck, as it is here. Art decks are collectors items. I’m not saying you can’t do divinations with the China Tarot, you most certainly can; but I am saying that most tarot folk I know won’t be buying this for their go-to workhorse professional reading deck. Instead, it’s for collecting, and definitely worth acquiring before it goes out of print.

Der Jen was a remarkable Taiwanese artist who left this world at far too young an age.  The China Tarot (even though Der Jen is Taiwanese, *cough*) is an incredible fusion of Chinese fine art, Chinese culture, and tarot. It is high up there in ranking as one of the most beautifully rendered art decks on the market and if Chinese art and culture resonate with you, the tarot practitioner, especially the Marseille readers, then I dare say that getting this deck is a must.

7 thoughts on “China Tarot: A Deck Review and the Traditional Chinese Art of Der Jen”