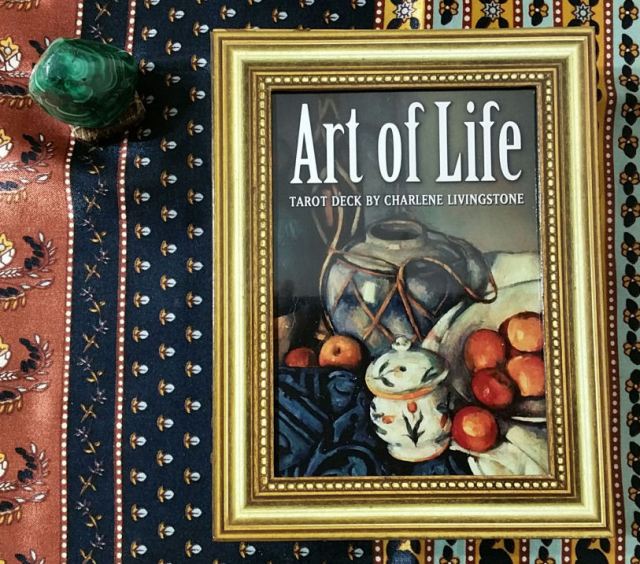 The Art of Life Tarot by Charlene Livingstone is the tarot deck I would create. It’s totally up my alley in every way. Let’s bring together the structure of tarot with classical art and inspirational quotes from literary masters and spiritual leaders. That’s what Charlene Livingstone has done here and U.S. Games then materialized her vision into one of the most beautifully packaged decks I’ve seen. 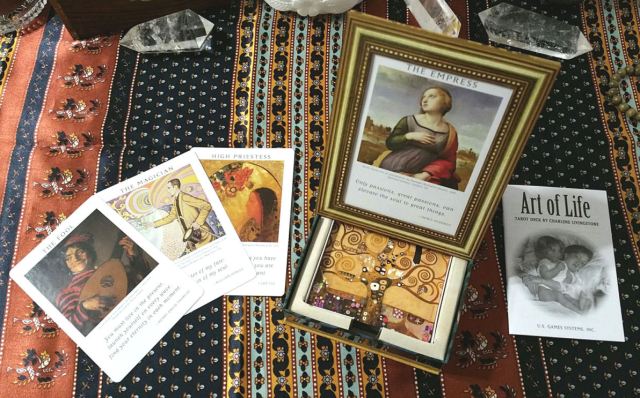 The box that the deck comes in does a cool transformers trick and becomes a display stand. That rocks. Above you’ll see how it all works, with the box-display-stand showing The Empress card, which features a painting of Saint Catherine by Raphael and a quote by Denis Diderot on passion. “Only passions, great passions, can elevate the soul to great things.” 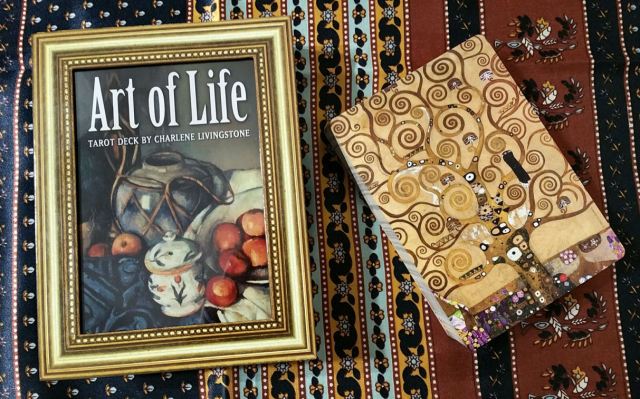 Okay, now hold your thought. I’m going to continue with the deck review first. Let’s talk about the card backs.

The card backs feature a detail from The Tree of Life by Gustav Klimt. All of the cards feature public domain artwork. Conception for the deck came to Livingstone after she experienced hardships in her personal life, which led her to delve deeper into the tarot. A dream or sign in the form of a tarot card, the Knight of Wands, came to her as a message, and from there, the Art of Life Tarot was birthed. 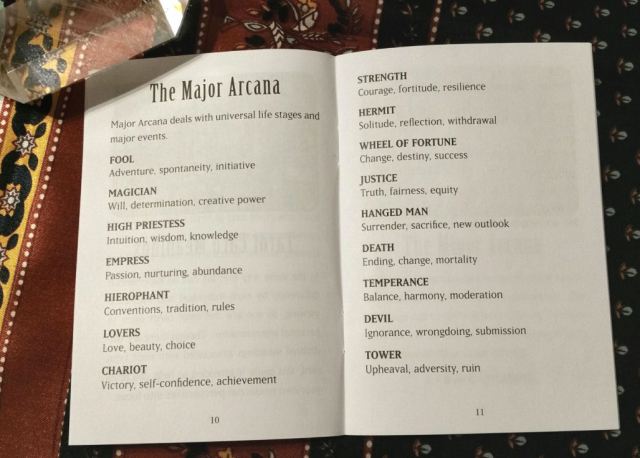 The little white booklet (LWB) is literally a little white booklet. There isn’t a whole lot of information, but this is going to bother no one. Everything you need is on the tarot cards themselves, whether you are a non-tarot reader who might want to get this deck for its inspirational quotes and pretty pictures or an advanced reader who wants to add this breathtaking masterpiece to your deck collection. 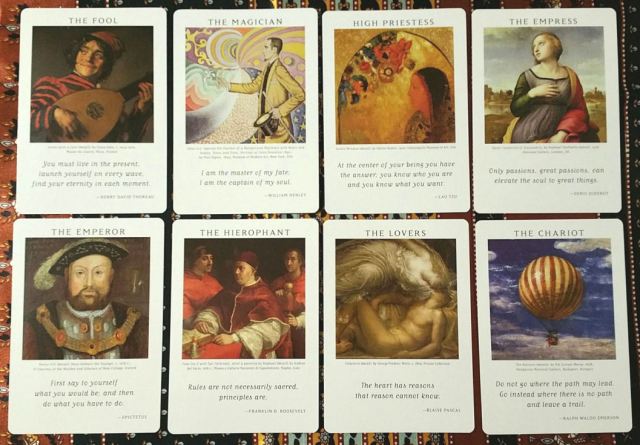 What is most extraordinary about this deck is its versatility. You can gift this deck to a writer or artist friend, even one who knows nothing about tarot. That friend can use it to draw daily sources of inspiration and motivation. As Livingstone notes in the LWB, she wanted every card to bring strength and optimism. And that she has definitely accomplished.

The essence of the tarot card, painting selected, and quote come together beautifully. Take, for instance, The Emperor, a card of sovereignty, authority, and execution. We have a painting of Henry VIII and a quote from Epictetus, “First say to yourself what you would be; and then do what you have to do.” The quote captures the umbra of the tarot Emperor and transforms it into an empowering message.

And The Chariot is an air balloon. Love it. 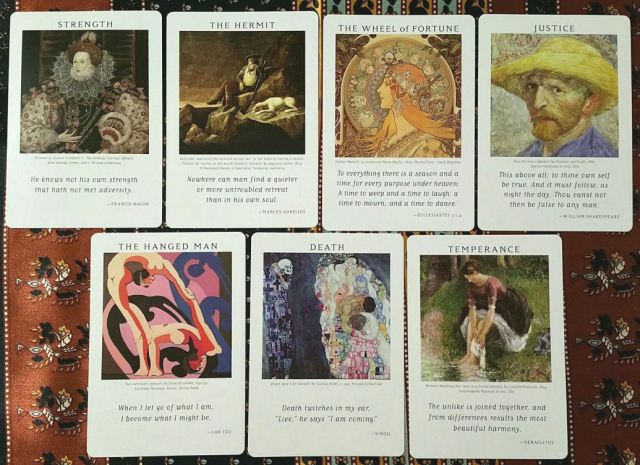 Going through the deck is very much like walking through a museum, with the benefit of added inspirational quotes. I love most of Livingstone’s selections. Strength is Queen Elizabeth I. The Wheel of Fortune is the Zodiac by Alphonse Mucha.

When I stopped at The Hermit card (the card for 2016, by the way), I almost thought of The Fool, or well a resting Fool, since the energy of the tarot Fool should be in movement and the figures pictured in Augustus Earle’s painting are at rest. Yet it’s a guy and a dog, though instead of a bag of magician’s tools, we have a rifle. Same diff, right? 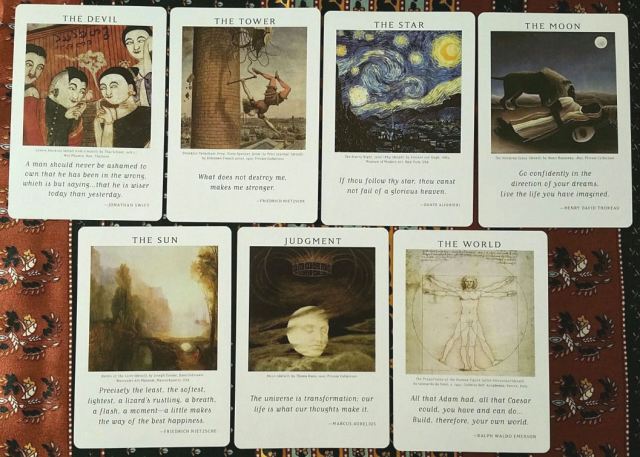 The Star card is paired with the famous Starry Night painting by Van Gogh. How perfect. Da Vinci’s The Proportions of the Human Figure is the perfect World card. At first I thought maybe I wanted the size and dimensions of the painting to be larger on the card and the quote smaller, but then I decided nah, I really do like it the way it is. 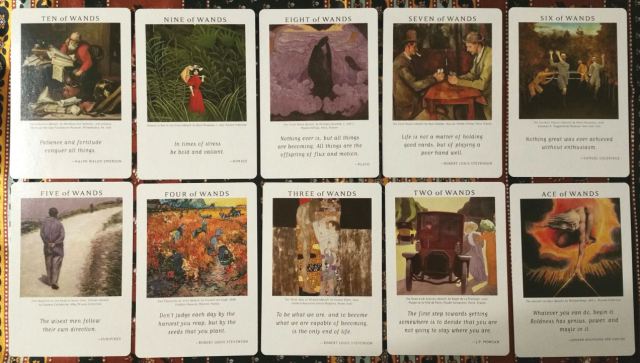 The Art of Life Seven of Wands, which in the RWS tarot deck is that guy up against the edge of a cliff with a staff and six staffs pointed at him, is a painting by Cezanne and a really great quote: “Life is not a matter of holding good cards, but of playing a poor hand well.” I really love how that message works with the classic meaning of the Seven of Wands. 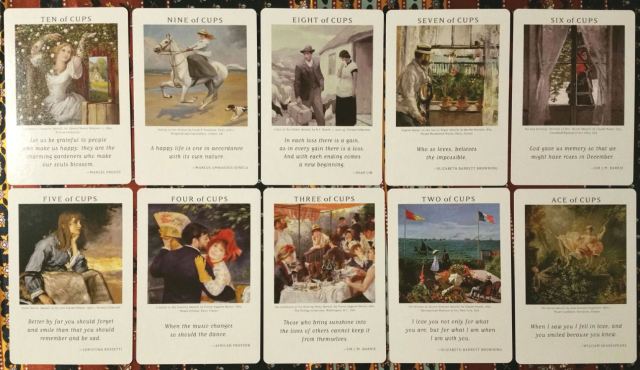 The Ace of Cups depicts an 18th century woman on a swing, and expresses the sentiment of lovers. It is accompanied by a quote from Shakespeare on falling in love. My personal relationship with the Ace of Cups is a bit different, but I think Livingstone’s expression of it will be more widely appealing.

The walk-down-memory-lane vibe of the Six of Cups is preserved here: “God gave us memory so that we might have roses in December,” reads the card, a quote from Sir J. M. Barrie.

In the Seven of Cups we see a figure in the foreground of Manet’s painting that does call to mind the deliberation that is going through the mind of the figure in the RWS Seven of Cups, though the greater essence of the card is different here, showing longing rather than temptation. I would have really liked to see the fearless woman on a galloping white horse pictured on the Nine of Cups to be the Nine of Pentacles instead, but this is an interesting pairing. 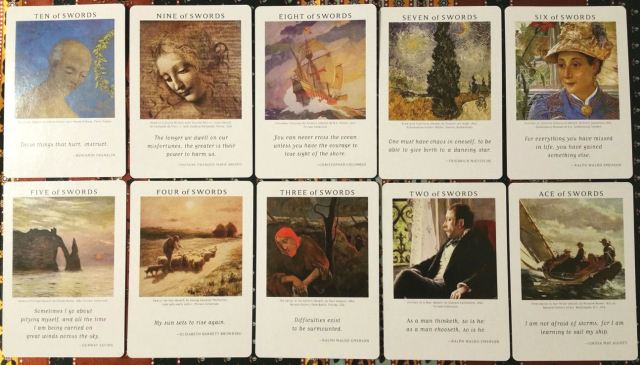 A few of the cards did cause a head scratch, like the Eight of Swords, a card I’ve traditionally associated with a sense of mental perhaps even spiritual bondage and the need for release. The painting that has been chosen for the Eight of Swords here is of a majestic ship out on the open sea. It’s Columbus Crossing the Atlantic by N. C. Wyeth. The quote, though, somewhat makes sense: “You can never cross the ocean unless you have the courage to lose sight of the shore.” So the art is showing what happens after the release that is needed per the message of the Eight of Swords. 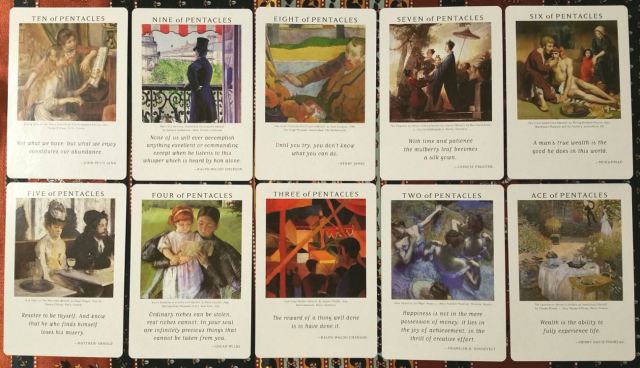 The Eight of Pentacles is of Van Gogh painting sunflowers and quote by Henry James on trying. I love that. 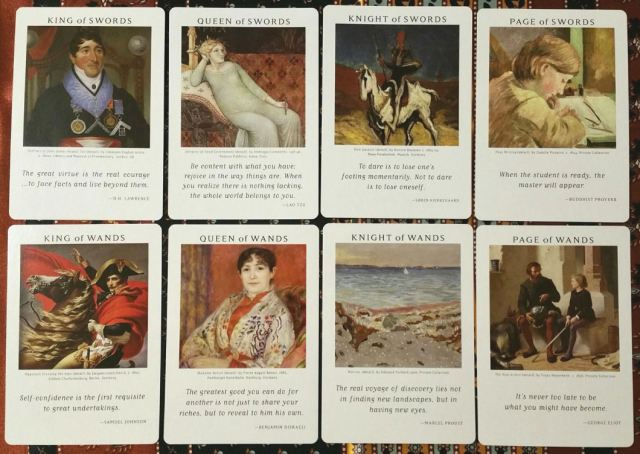 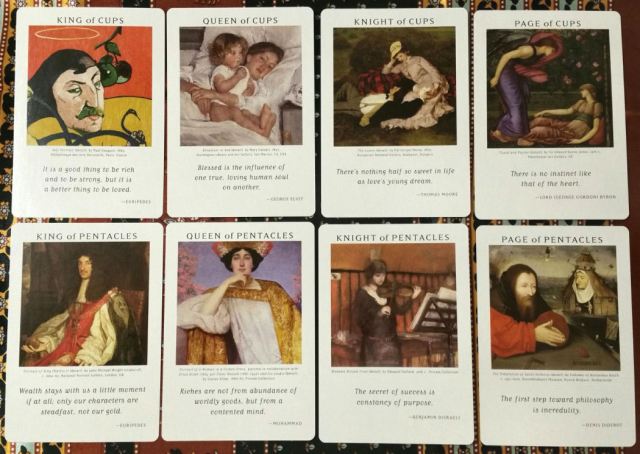 I’ve always associated the Queen of Cups as a mother, a very motherly, nurturing feminine energy, and I guess so does Livingstone, using Breakfast in Bed by Mary Cassatt. The Knight of Pentacles is a violinist. Very interesting how several of the court cards show more than one people. I’m trying to think off the top of my head if any other tarot deck does that. Hmm. The more common depiction is just one human figure per court card. So I like the creative divergence here. 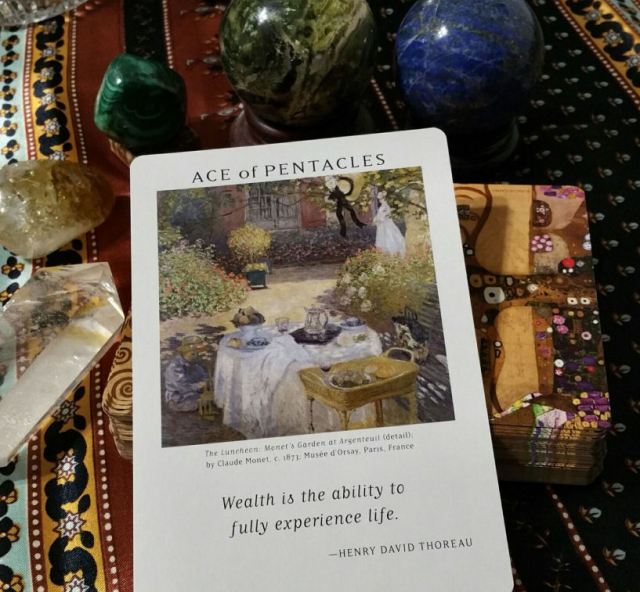 By far my favorite use for the deck is a daily card draw, especially in the morning, as a way to start the day off right, with optimism and motivation. Every card in here is motivational. The Art of Life deck is a really great gift idea for pretty much anyone. You can place it on an office desk without raising any eyebrows (the way people set out those motivational calendars) and change the card in the display-stand-box weekly (or at whatever frequency of your choosing). So tuck that in the back of your head as a hostess gift idea for the future!

Okay, back to the reading. Recall:

Right to left, red tiger eye card for work/career; citrine card for money matters; dumortierite card for a creative project; amethyst for spiritual path; and crystal quartz for a message from Spirit. Choose one.

I’ll provide a close-up of each card for your viewing.

Each card is provided below and hyperlinked to a full size image for clearer viewing.

Reconsider the scenario through a more impartial lens. Come on, give it a try. I know you think you’re being fair and objective, but for shits, let’s try again.

Also, work-life balance. You’re all out of whack right now and worrying about the wrong things. Redirect your focus. Think about what really matters to you and channel your focus there. Suddenly, you’ll find yourself less stressed out because you’re devoting time and labor to what you actually care about. The choice you think you face is a false choice.

This may come as a surprise to you, and for sure the uncertainty of the future makes you feel like it couldn’t be true, but you can earn a good, prosperous living doing what you love. But to do that, you must assume the role of a leader, a sovereign. Think about how you can position yourself as a leader, a “king” in your particular field or endeavor, and you’ll attract the financial gains you seek.

Who are you? What is your nature? The spiritual understanding you seek will be attained after you can answer those two questions for yourself. At this time in your journey, reflect on yourself. Know thyself. That is the stage of the journey you are at. All those spiritual and esoteric studies focused outward are better directed inward, on understanding who you are and what your nature is. 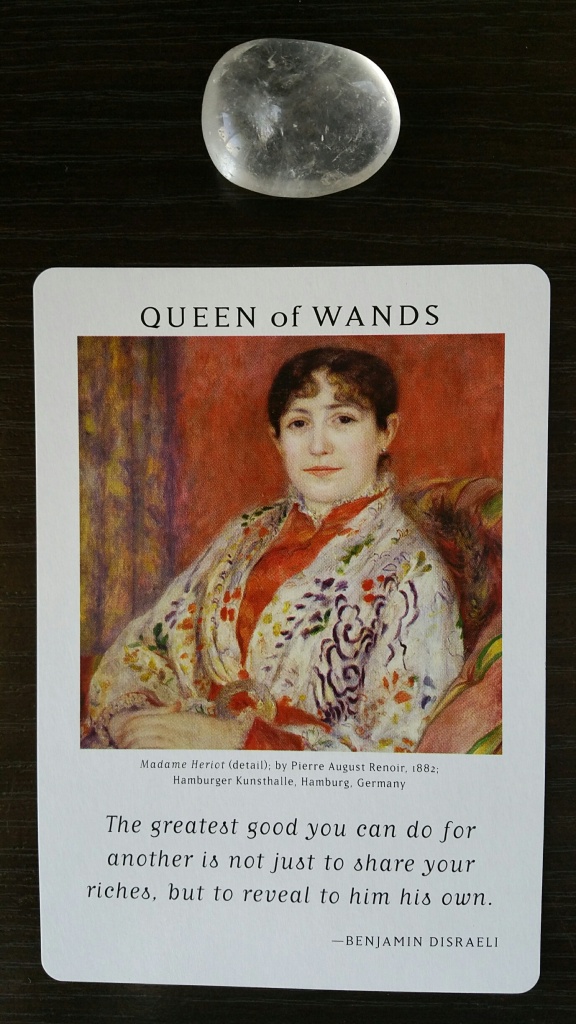 You possess the ability to inspire and motivate others. Instead of giving from what is yours, show others how to reap from what is theirs. Be guided by that and you’ll have the resolution to the matter you’re inquiring about. 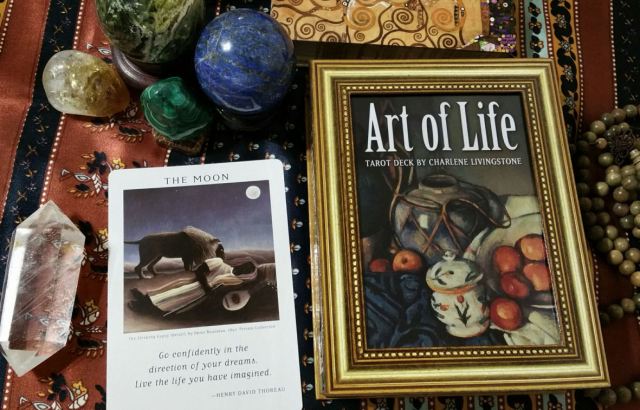 I’m keeping the Art of Life tarot deck in mind for the next gift giving season. It’s also great to have a couple of these in storage for emergency last minute hostess or coworker gifts. I’m so impressed with the exhaustive amount of work Charlene Livingstone has clearly done to put this amazing deck together, reconciling classical art, the tarot deck structure, and well-known quotes. Just a beautifully produced deck that’s sure to please.

FTC Disclosure: In accordance with Title 16 of the U.S. Code of Federal Regulations Part 255, “Guides Concerning Use of Endorsements and Testimonials in Advertising,” I received the Art of Life Tarot from U.S. Games for prospective review. Everything I’ve said here is sincere and accurately reflects my opinion of the deck.

14 thoughts on “Deck Review of the Art of Life Tarot”