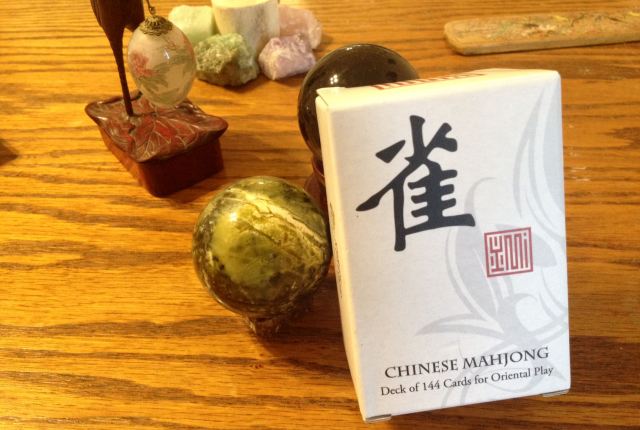 While there is no historical verification that tarot descended from mahjong, their striking similarity in structure and the cosmological or philosophical correspondences associated with the playing pieces is still worth noting. Both seem to be subdivided into Trump cards and Minors, and within the Minors, further subdivisions into suits, with each suit numbered into pip cards or tiles. Both were intended for games, but both are also used for divination.

Recently I’ve been inspired to hunt down my own mahjong set, but there is a reason Chinese people get special tables for mahjong– the darn thing takes up a lot of space. There’s just a crap ton of tiles that make annoying clicking sounds when you shuffle, and the tiles remind me of Joy Luck Club or something, I don’t know. I knew I wouldn’t be using my set for games, and it’d be strictly for divination study. Intuitively, a whole set of mahjong tiles (the standard click-clack ones Chinese folk play with) didn’t feel right in my reading room, my personal sacred space. So. I opted for a more discrete alternative– mahjong in the form of cards. They have that now! It’s awesome. It’s a deck of 144 cards. 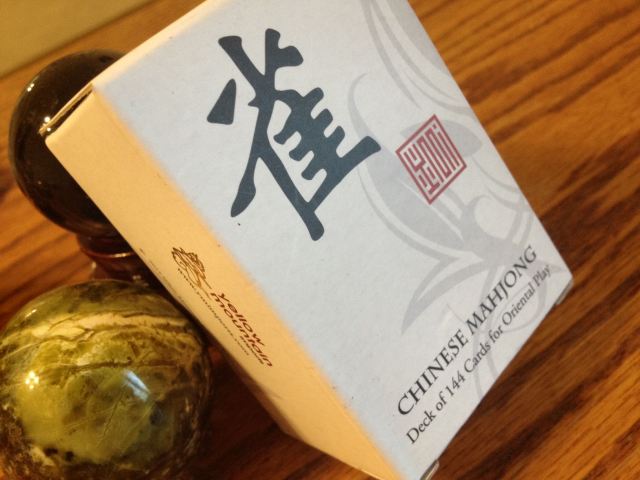 I’m using a cute little deck referred to simply as “Chinese Mahjong: Deck of 144 Cards for Oriental Play” published by Yellow Mountain Imports. You can get it off Amazon for all of five bucks. It’s great. The card quality is kind of meh. They didn’t produce this particular deck with esoteric or spiritual work in mind, that’s for sure. There’s a tacky high-gloss laminate and as you can see from the photos, it’s very, very basic in card imagery.

Mahjong consists of 3 suits: Wheels, Bamboo, and Characters. The 3 suits are correspondent with Heaven, Earth, and Man, after the Chinese cosmological concept of the Trinity of Lucks.

Heaven Luck represents circumstances you’re born into, beyond your control, like the social class of your parents or innate talents and physical attributes, i.e. nature. Heaven Luck is believed to be pre-ordained.

Man Luck is free will, what you do with yourself, the choices you make, your education, your actions, behavior, attitude, etc.

Additionally, Wheels often indicate life circumstances, events, conditions, or things that “happen” to you, things beyond your control that you’re just going to have to figure out how to deal with, the cards you’ll get dealt; Bamboo will talk about wealth, finances, money matters, security; Characters talk about career, education.

Super-traditionally here, marriage was seen as orchestrated by the fates, and so might get expressed in a reading through the Wheels, or if some important things were about to go down, with the Honors or Supreme Honors (more on that later). So it wasn’t like in tarot divination where you might have a whole suit (i.e., Cups) associated with love, relationships, and our emotional plane. The emotional plane wasn’t really seen as this whole separate matter that might require its own suit. So there wasn’t a suit for it. Interesting cultural differences here, me thinks.

Within each suit there are pip tiles numbered 1 to 9. There are 4 sets of these 3 suits of 9 tiles each. So far we’re at 108 tiles/cards. I see these 108 tiles as similar to the Minor Arcana in tarot.

Next you have Honors. Within the Honors, there are 4 directions–North, South, East, and West, which also represent the four guardians, and 3 dragons–Red, Green, and White. Again, there are 4 sets of each. That’s 28 Honor tiles in total.

The three dragons, or as pictured above, white, red, and green respectively. The white dragon (when you get the card with the big blank white square) suggests a spiritual, divine, or supernatural presence. It’s about ghosts and other-worlds. I’m not sure what a more rational modern-day correspondence might be for the white dragon tile. Maybe, um, higher self shining through? I dunno.

The red dragon can indicate government, authority, social order, or agency in some way. Traditionally it might have indicated an imperial decree. In modern interpretations, it relates to society and the seeker’s specific relationship to society or the social order at hand. The green dragon is like getting The World card, or The Sun, or 10 of Pentacles or 10 of Cups. It’s all about great abundance and prosperity. It’s uber auspicious.

There are the 4 seasons–Spring, Summer, Autumn, and Winter. These cards are often thought to denote timing, in a rather literal way, but can also be used to denote developmental phases of progress. Unlike Honors, there is only 1 set of Supreme Honors, making it 8 Supreme Honor tiles in total.

Then there are the Supreme Honors. Within the Supreme Honors, there are 4 plants–Plum, Orchid, Chrysanthemum, and Bamboo, symbolizing the 4 virtues–morality, proper speech, modest manners, and diligence. For me plum, orchid, chrysanthemum, and bamboo also hold distinct metaphysical properties, and so I integrate my metaphysical correspondences of the flora into my divinatory practice as well.

Plum symbolizes perseverance, hope, and can prognosticate matters relating to health or wealth. Orchid stands for beauty, grace, the aristocracy or royalty, and refinement. It shows upward mobility, advancement of some sort. Chrysanthemum is for longevity, security, stability, and promises fulfilled. Bamboo is for scholarship, dedication, diligence, or can prognosticate matters relating to work, business, or finances.

These Honors and Supreme Honors together, 36 tiles, might be likened to the Major Arcana. They touch on theosophical dimensions to human life and personal spiritual development rather than more physical matters (such as work, career, love, relationships, which seem to be covered by the suits). Sounds a lot like how we describe the Majors in tarot, no? 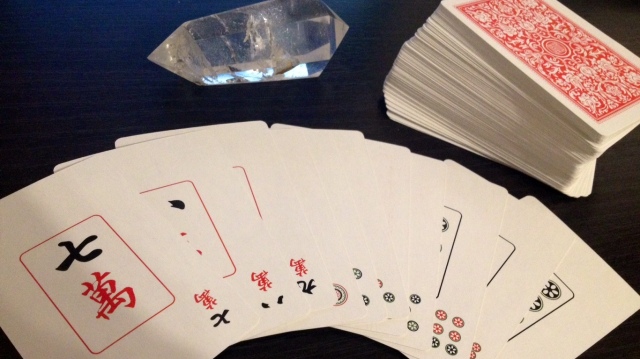 Mahjong has been around forever. The layman’s historical account of the origins of mahjong is a lot like the gypsy origin narrative in tarot: there’s a commonly held belief about where it might have come from, though historical documentation of that belief is scant. Likewise, most ordinary folk who are into mahjong might say it came from Confucius and was not only a game game, but the symbology on the tiles also taught Confucius’s virtues, lessons, etc. Others say it was conceived during the Ming Dynasty and imperial concubines used it to tell each other their fortunes. All this is hearsay and I have no idea what’s historically factual and what’s wild romanticized stories that Chinese grandmothers spun up to entertain children.

People will try to read fortunes out of palms, tea leaves, the stars, stones, turtle shells, bones, everything, so it’s really no surprise or shock that mahjong tiles might get used for divination. And while no one I know knows the history of divination uses of mahjong, most of them will nod at knowing that one kooky aunt who has claimed to commune with spirits before and who uses mahjong tiles to tell fortunes. (Oh god… I’m well on my way to becoming that aunt….)

Mahjong tile interpretation is based heavily on numerology, Chinese astrology to a certain extent, and the same cosmological principles applied in feng shui. Confucianist thought is often integrated into the card/tile interpretations as well. When fortunes are being told with mahjong, the interpretation can get more literal than Western tarot practitioners are used to. For example, the number 7 coming up could, according to the fortune teller, prognosticate July, or 7 days, or the 7th week (which one it is might depend on the other cards in the layout), or the digit 7 in the year. They do but are less likely to go for the esoteric numerological and spiritual significance of the number 7 like many modern day tarotists would do with tarot.

I didn’t know a whole lot about mahjong before, other than that it was a game many of my relatives play and that sometimes, some relatives allege that the future can be told from the tiles. Now that I’m understanding its structure a bit more, I’m amazed at how similar it is to tarot and even to minchiate. I’m not talking about one or two or even three points of similarity. There’s too many, if you ask me, for this to be dismissed as random. Even if it isn’t a matter of chronology or cause-and-effect, it is at the very least a noteworthy synchronicity.

UPDATE: Kelly from The Truth in Story sent this link in, “Serena’s Guide to Divination Using Mahjong.” It’s fantastic.