I totally swiped this deck interview idea from Kate at Daily Tarot Girl. Read her blog post about it here. I was gifted the Witches Tarot, a deck created by Ellen Dugan and illustrated by Mark Evans. It’s a Rider-Waite-Smith based deck with photographic digital art that is a near seamless blending of realism and fantasy.

The cards are 2.75″ x 4.60″, a typical size for tarot, though perhaps a smidge smaller, which means they shuffle great in my hands, fan out just beautifully across a tabletop, and are very easy to work with. It’s published by Llewellyn and has a pretty standard Llewellyn/Lo Scarabeo cardstock quality. For an RWS tarot practitioner who likes modern digital art, the Witches Tarot would make an incredible workhorse reading deck.

The cardbacks are so pretty. There’s a galactic vibe to it and at the center, the triple goddess symbol, with the waxing crescent, full moon, and waning crescent moon. The backs are not reversible, however, as one edge is reddish and the other bluish. I’ve opted not to read with reversals when using this deck.

BENEBELL: What is your main mission or message in this world? 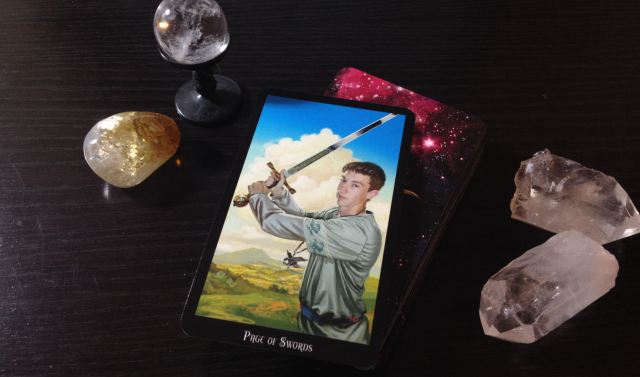 The page is represented by a tall, thin teenage boy on a green plain. He wears a talisman with a hawk around his neck. This card, per the Companion guidebook is about thinking quickly and active decisively. However, use wit, not brute force. Per the traditional attribution of the card, that of messages, the hawk symbolizes messages. What an appropriate card to respond to the question with! In the Witches Tarot deck is embedded Ellen Dugan’s message, a message about her belief systems, her traditions and how she has integrated those traditions with the Rider-Waite-Smith tarot, and a quick and natural wit about the deck’s style that will attract its followers.

BENEBELL: What is most important to you?

Oh dang, I swear I shuffled the cards well. Yet I drew the Page of Swords again. Its message that the deck wants to convey is what is most important to it.

BENEBELL: What do you want to share with me?

Another page. More messages. Here the Page of Wands is en route, traveling along the path. The element Fire is represented in the young boy’s pendant, which also calls to mind solar magick. You can definitely see happiness and enthusiasm in his youthful face. He travels with his familiar, a tomcat. The ivy on his wand symbolizes good luck and protection from negativity. This is an auspicious card, and the deck wants to share with me a great deal of positivity and bright energy. I love it! The Page of Wands can represent new job opportunities, and so given the question asked, I see that as suggesting that this is a great professional reading deck. The deck invites the practitioner to use it for professional tarot readings.

BENEBELL: What would you like me to know about you? 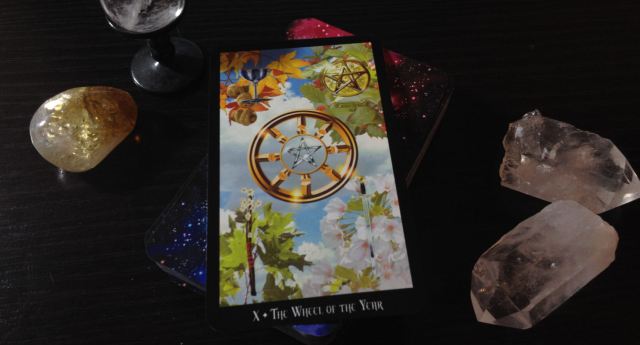 Dugan has reinterpreted the Wheel of Fortune card to the Wheel of the Year, in line with the pagan themes of this deck. Here we have a silver pentagram surrounded by a golden wheel, expressing all eight sabbats, the four seasons, and the cycles of nature. The four seasons are illustrated on the card– Earth with the pentacle and holly for the winter solstice; Air with the sword and cherry blossoms, which also corresponds with the spring equinox; Fire with the blooming hawthorn wand and oak, for the summer solstice; and Water with the chalice and orange maple leaves and acorns for the autumn harvest. The overall theme of the card is good luck and is associated with the deity Fortuna.

The pagan tradition differs from my personal approach. I tend to attribute the season of winter with Earth/Pentacles, autumn with Air/Swords, spring with the Fire/Wands, and summer with Water/Cups. So I guess having drawn this card for the question really helped me understand how the Witches Tarot and I are similar and how we differ. To showcase that, Key X was perfect.

BENEBELL: Do you have a favorite card in this deck?

Okay, since this is the deck’s favorite card, let’s read the accompanying card description in the Companion guidebook:

Dawn is breaking, and we see a blooming hawthorn branch stuck firmly into the grassy hill. The wand is a bit reminiscent of a Maypole, with its crisscrossed ribbons and a fire-red streamer blowing in the breeze. According to tradition, the hawthorn tree was a popular choice for Maypoles. Behind the wand there are green rolling hills and a turreted castle on a hill. The castle in the background represents the reward that waits for you after your quest for knowledge and advancement is completed. The hawthorn is associated with the element of fire, making it fitting as the wand representation in this tarot for Witches. The hawthorn flowers flourishing on the single wand symbolize ideas that emerge and then blossom from our minds. In the language of flowers the hawthorn blossom symbolizes hope. A bright red butterfly flutters to the side of the wand. The butterfly symbolizes transformation, regeneration, and joy. It is going to be a beautiful day and one full of promise.

This card is pure, potent creative Fire  energy. There’s a lot of creativity that went into this deck. The card tells me that the Witches Tarot values the creative path, perhaps above all else, as this is its favorite card. This is a card that represents creativity, the courage to create, optimism, and ambition. It is a card about hard work becoming successful reality.

BENEBELL: Which card sums up your personality?

Beautiful! I really love this card’s artwork, though I am not entirely sold on it as representative of my personal relationship with the traditional RWS Moon card. Here, the figure pictured is Hecate the Crone holding a torch. Though she appears in guise as a beautiful maiden, she is also a crone, a woman of power, one who has acquired great knowledge and walks with wisdom. The wolves in the background represent personal wilderness, and there is a strong sense of lunar magick about the card. This card, and so this deck is about waning moon magick, intuition, and the Crone Goddess. It is about development of psychic powers and the ability to see what others try to keep hidden. Wow. Truly a perfect card to have been drawn for this question.

BENEBELL: What can I do for you that would ensure we have a good relationship? 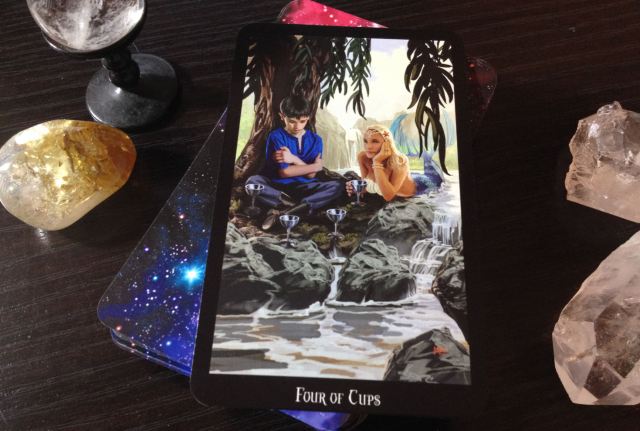 Hm, interesting choice. I guess I’m the boy sitting under that tree and the Witches Tarot is the mermaid, representing lunar and feminine energies (per the Companion guidebook), and she waits patiently for me to look up from my sulking and see her, and see the opportunities offered by the deck. The willow tree is associated with the moon and water energy, and so a key theme here in the way the deck is answering the question is intuition. The willow also represents patience. Ah, to have patience with this deck. It’s a very appropriate answer, given that I normally don’t like digital art. My initial impressions of the deck had been on the fence– I wasn’t sure how often I would be reaching for this deck, but here, the Four of Cups– patience. Allow for change. Unexpected opportunities will arise with this deck.

The above are a few of the cards I don’t like as much. I’m not a fan of The Magician card in this deck, mostly because he seems to have no neck. The inclusion of children in the background of The Emperor card makes sense, since he is the archetypal father figure, but for me, on a certain intuitive level, it doesn’t work, because it takes away from the traditional austerity and sternness of The Emperor. It’s not that I mind the depiction of the Six of Swords per se, I just don’t like that figure rowing the boat. Something about that figure, I don’t know. No like. Also not liking the Seven of Swords much.

A few of the cards in the Major Arcana have been renamed– Wheel of Fortune to Wheel of the Year, The Devil to The Shadow Side, and Judgement to Karma. I also love some of the reinterpretations, such as The World, the Five of Wands, and the Five of Cups. The Five of Cups keeps true to RWS imagery, but I love the inclusion of the mermaid.

The Witches Tarot Companion is the guidebook that goes along with the deck and it’s one of the best guidebooks-for-the-deck books I’ve come across in a while. There are a few basic spells using the tarot, several great spreads, card image descriptions (very helpful in understanding the deck creator’s use of symbolism), and card meanings. For the Majors, there are even deity associations.

The Witches Tarot is a great reading deck, especially for the reader who works well with photographic or digital art. While I would normally opt for hand-drawn tarot decks, Dugan’s Witches Tarot deck has such great energy to it and I love many of her reinterpretations and symbolic additions to the RWS.

Ellen Dugan is a highly celebrated author and practicing garden witch. You definitely see her influence in the imagery and symbolism of the Witches Tarot, and the Companion guidebook is well worth the read. This deck has inspired me to check out Dugan’s other publications. 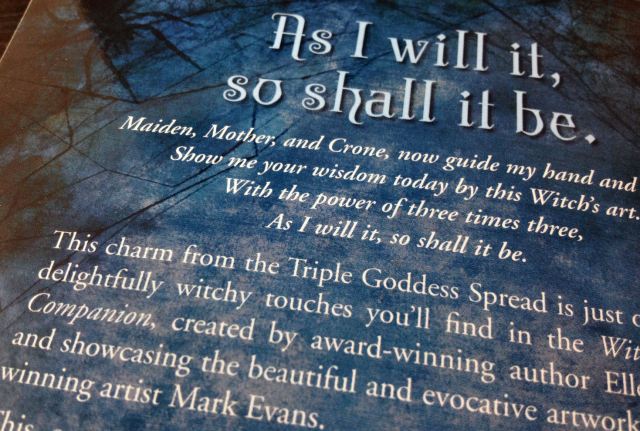 11 thoughts on “The Witches Tarot: Deck Interview (and Review)”