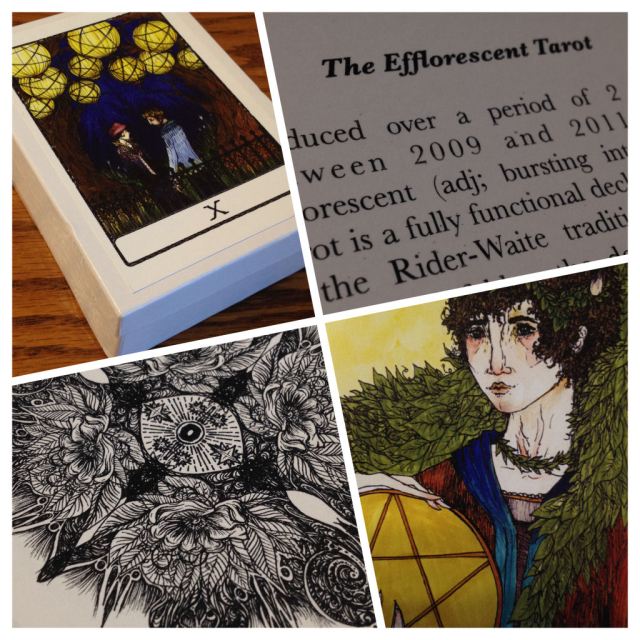 The Efflorescent Tarot is a self-published deck by artist Katie Rose Pipkin that you can order through Etsy. It comes in two options, colored as shown in this deck review or black and white. View all card images, in both black and white and color at Pipkin’s website here. The deck name could not be more appropriate, because the artwork here truly represents the efflorescence of Pipkin’s extraordinary artistic talent. I have a particular weakness for ink-drawn decks and the Efflorescent Tarot is an incredible demonstration of the medium. 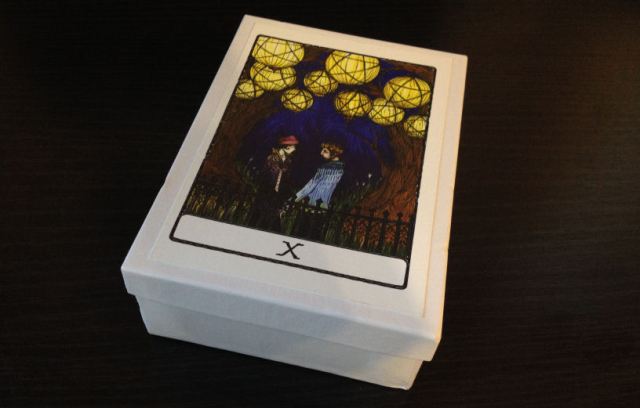 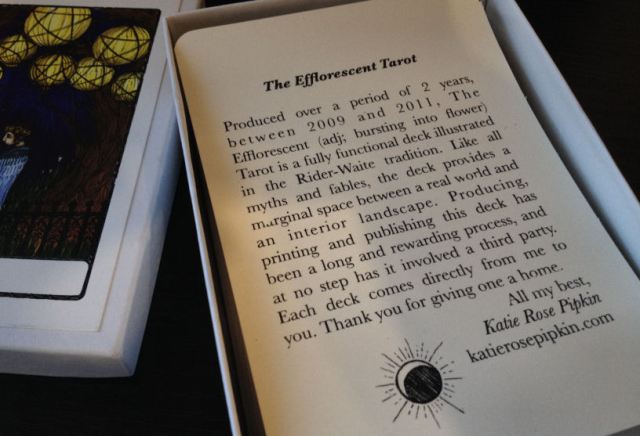 There is no little white booklet and the only introductory material that accompanies the deck is that single card you see in the above and below photos. That’s all you need, really. The Efflorescent Tarot is a Rider-Waite-Smith-based deck and if you’re familiar with RWS, you’ll read just fine with this deck, no explanations needed. 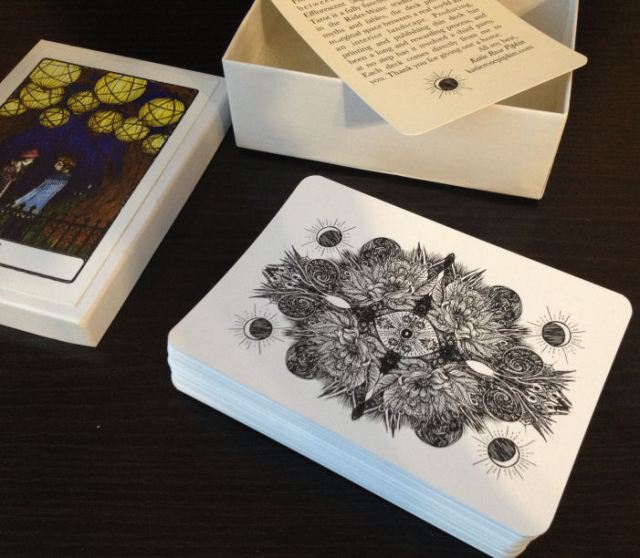 I would not call the deck a clone, however, because Pipkin does deviate from traditional RWS imagery in a few of the cards to give her own interpretive spin, like the Ten of Pentacles on the lid that you see above and also in a few other cards, which I’ll mention later. All card images are available for your viewing pleasure on Pipkin’s website here. 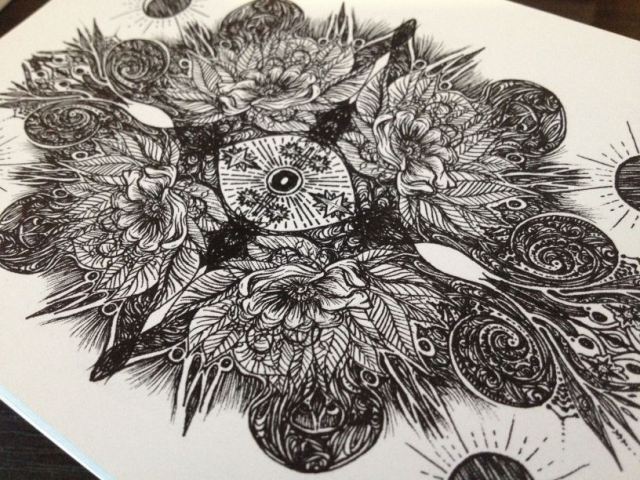 The backs are reversible and I absolutely love the detailing on the backs. I love how the imagery is evocative of efflorescence. 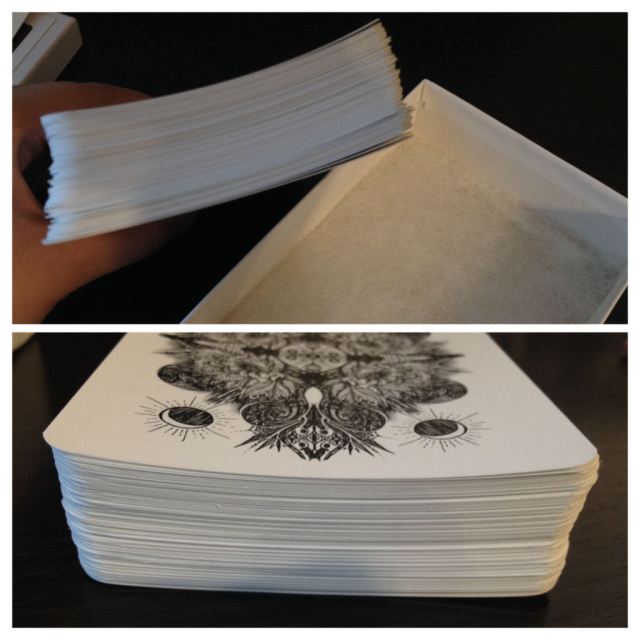 When the deck arrived, the cards were bent a bit into that curve, as you see in the above photographs. I tried to curve the cards the other way to straighten them out a bit, but it may take a bit more tinkering before I succeed. They’re also a bit difficult to shuffle, so for me, I have to shuffle slowly. The deck is large for a standard tarot deck– at 3.5″ x 5.0″, the size of most contemporary oracle decks. 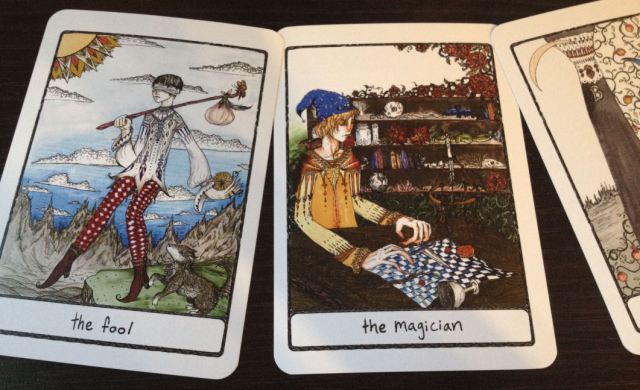 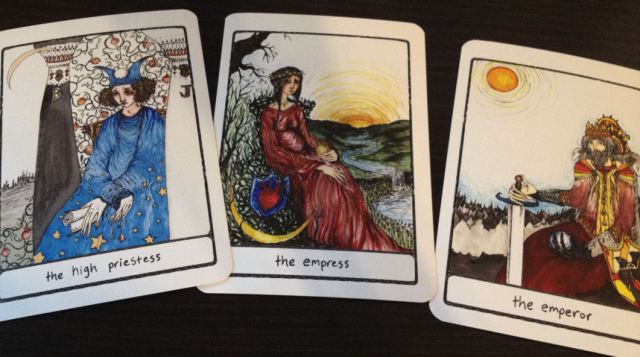 The artwork is just beautiful, and again, this isn’t an RWS clone. It’s RWS-based, but Pipkin has added her own interpretations to each card. In The Fool, for example, instead of having his chin up in the air, eyes half shut as if he isn’t paying attention to where he’s going, in the Efflorescent Tarot, the Fool is blindfolded. In traditional RWS imagery, the Fool still has both feet planted safely on solid ground, and is just walking dangerously close to the edge of the cliff. Here, the Fool has one leg in mid-air, off the edge already. For me, I also like to utilize the traditional RWS white sun imagery in The Fool, as it symbolizes power, potential, and portends changes and revolution. 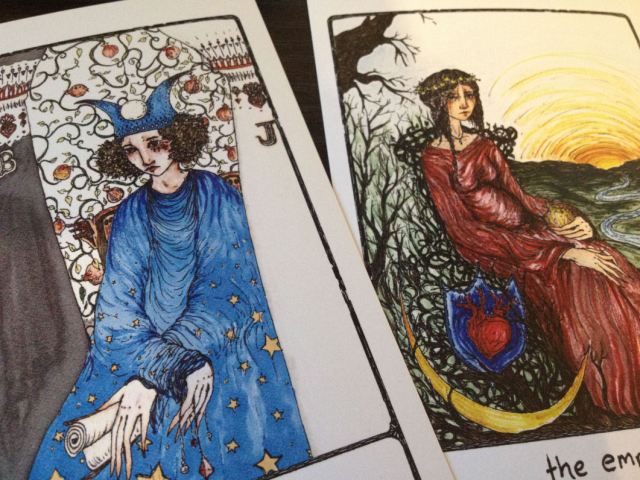 I found it interesting that the RWS pomegranates were kept in the background of the High Priestess, but then were taken out of The Empress. Whereas the water-by-her-feet-and-crescent-moon imagery is traditionally prominent in the High Priestess, that imagery has moved over to the Empress. For me, now there’s more mystery and intrigue in the Efflorescent Empress than there was in the original RWS Empress. 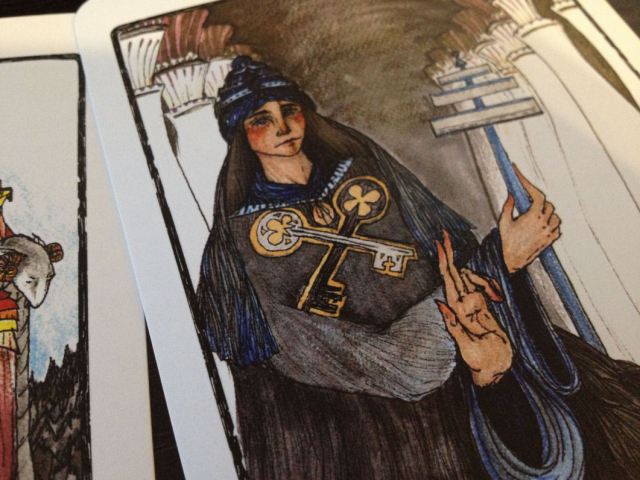 The one thing about the artwork on this deck, though, is that all the figures have forlorn expressions on their faces. The High Priestess, the Empress, the Hierophant, everybody looks melancholic. Some of the cards, like the Wheel of Fortune, deviated from RWS and went farther back in time to some of the older pre-RWS decks. 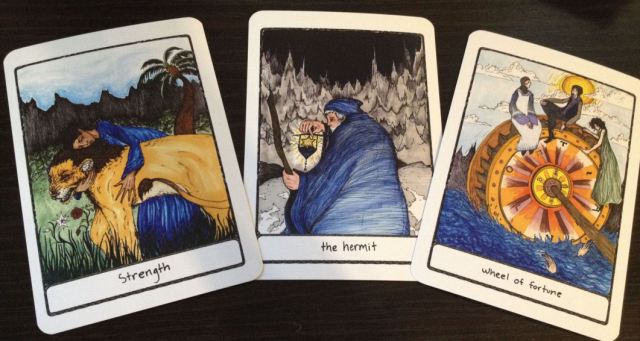 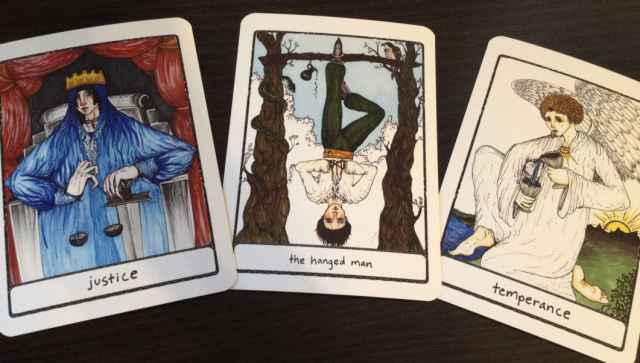 Seemingly minor but significant changes in the imagery make the Efflorescent Tarot unique. In The Hanged Man, for example, though this is a self-professed RWS-based deck, here the hanged man has his hands in prayer in front of him, and not hidden behind him. That notable detail, as with the snake coiled around one of the tree trunks, would change the way I relate intuitively to the card. The halo, too, is noticeably missing.

The Queen of Wands in the Efflorescent Tarot is one of my favorites. I love that card. The Four of Wands, though, conveys more melancholy than your standard RWS Four of Wands. I love the Ace of Cups, love the androgyny of the two figures in the Two of Cups, but is that figure in the Four of Cups looking up and reaching out for the offering? That’s a significant deviation from RWS tradition. 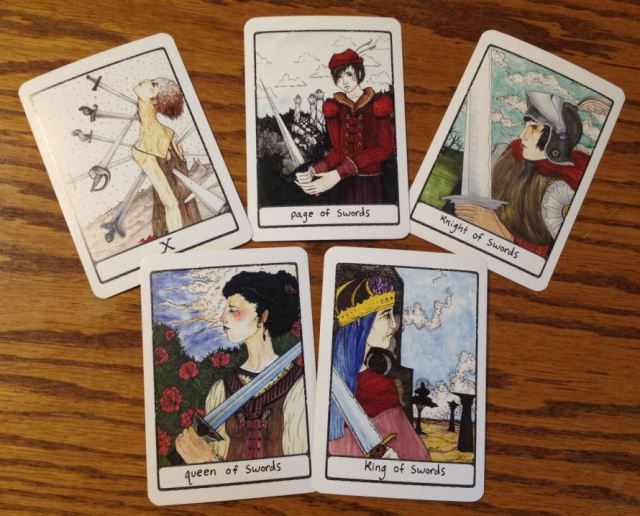 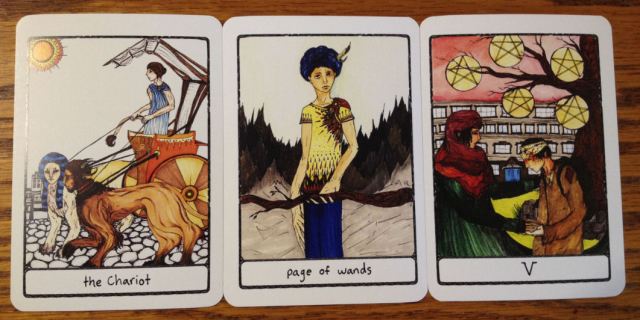 The deck is a seamless blend of traditional and timeless imagery with elements that are slightly more modern, like the buildings in the backdrop of the Chariot or the Five of Pentacles, and there’s something wholly modern to me about the shirt that the Page of Wands is wearing. 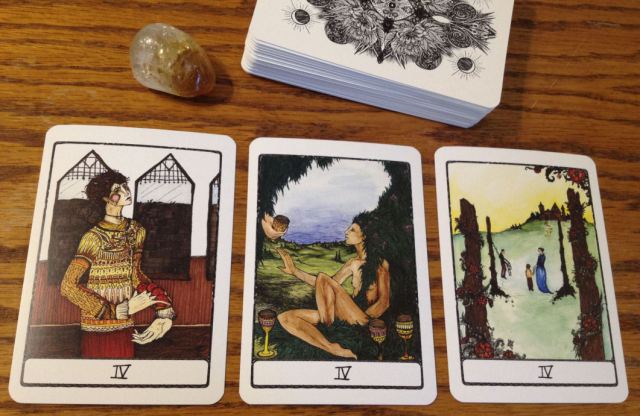 I shuffled the deck thoroughly and pulled three cards for a simple reading. Though the cards were well-shuffled, all three cards were IVs. Hunh. When three IVs appear in a spread, there’s said to be abundance resulting from hard work, diligence, and a strong work ethic. Although I would say this deck is easy to read for the RWS reader, I confess when I drew that Four of Pentacles on the right, I wasn’t quite sure at first glance which card that was. I kind of scratched my head, but then noticed the four red pentacles in his right hand and went, “Oh! Right.” The curling edges of the cards bother me during readings and cause the cards to not stay put on the table when drawn into spreads. This could be nothing more than a matter of breaking in the cards and over time, I’m sure the curl will flatten out, but for now, it is a bit of a bother. I wish the printers would do a better job with the production quality. I debated whether or not to trim the edges, but noticed that if I did so, the trimming would cut into the artwork on the cardbacks, which I definitely don’t want to do. Overall, a great RWS-based deck to work with and a must for any avid tarot deck collector.

21 thoughts on “A Review of the Efflorescent Tarot”