If you’re a Rider-Waite-Smith reader and you can still get your hands on the Pamela Colman Smith Commemorative Set produced by U.S. Games, then do so. I  believe it came out in 2009. It’s an incredible set with two books, postcards and prints of Smith’s artwork, and an RWS replica called the Smith-Waite Tarot Centennial Edition deck. It is just a beautiful, beautiful deck. Get it.

I’m not going to show all the cards because, um, I am pretty sure I don’t have to. You all know what the cards look like, I’m presuming. So let’s just talk about this amazing set.

It was recommended to me, I looked into it, and immediately ordered one. I’ve been looking for a professional reading deck, since my Golden Universal is getting worn down as are my other two RWS replicas, which I had been using as public reading decks. I bought many contemporary clones and wasn’t happy with any of them. So then I heard about this deck and thought it’d be perfect. Now I’m not so sure–because I want to keep it all to myself! No–actually, it’s a perfect workhorse deck.

The box set opens like a book and on the left side, you have two amazing texts, The Artwork & Times of Pamela Colman Smith, Artist of the Rider-Waite Tarot Deck by Stuart Kaplan and the classic The Pictorial Key to the Tarot by A. E. Waite. 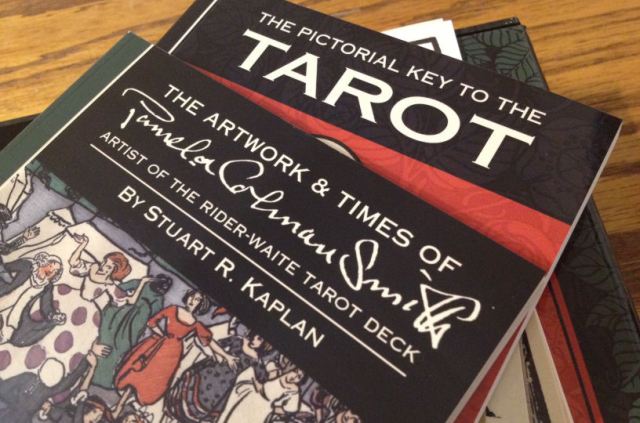 The Pictorial Key book doesn’t include the original prints of the Rider-Waite-Smith tarot deck and I’ve heard many other reviewers complaining about that. Personally, I speculate that the omission of the original prints was intentional, and may have been done so for legal reasons that I don’t care too much to get into. Interesting, though. However, the text itself is still great to have in such a beautiful book form.

The Kaplan book is in full color and is stunning. I wouldn’t exactly call myself a die-hard fan of Smith’s artwork, but I do love how iconic her style has become, especially to the tarot world. There’s also more esoteric symbolism in her art than you might realize upon first glance, and so I really could gaze at her work for hours on end. 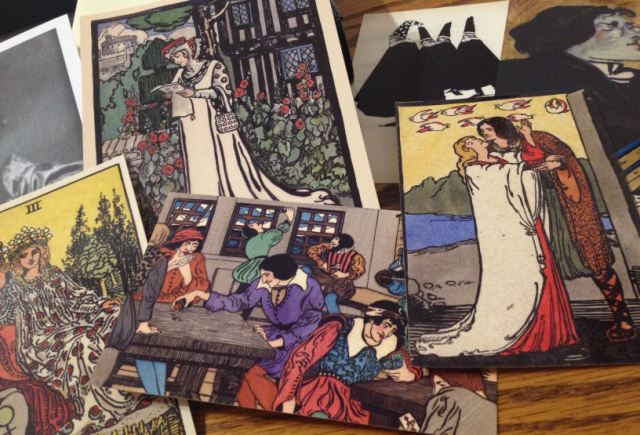 The set comes with six 3.5″ x 5.5″ postcards and four 5″ x 7″ glossy, good quality prints of Smith’s artwork, including her portrait. I’ll be buying frames to hang up some of these prints in the house.

There was also a fold-out sheet with several tarot spreads. The only one that held my interest was the Woven Spread, which is described as “a variation of the Celtic Cross pattern.”

The card backs on the Centennial deck are lovely. It’s the five-petaled Rosicrucian Rose as rendered by Smith and as you see it on the black banner in the Death card, along with Smith’s signature. The card backs are not reversible exactly, but if you don’t pay close attention, then you won’t notice.

Above on the left is one of my old “workhorse” tried and true go-to RWS replica decks. This one is the Rider Tarot Deck published by U.S. Games in 1971. You know, the one in the bright yellow box and the trademarked blue weave on the card backs.

Personally I have a very set way of wrapping my cards, as you can see above. Anyway, in the subsequent photographs, the deck on the left will be from the 1971 Rider Tarot replica and the deck on the right is the Smith-Waite Centennial replica. 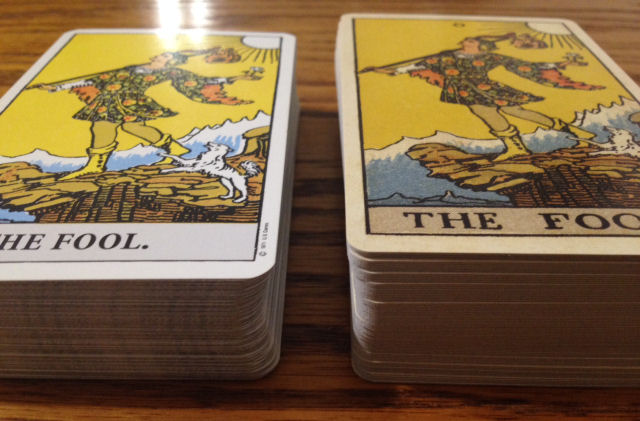 As you can see by the thickness comparison, the Centennial deck is made of a higher quality cardstock. There’s also an intentional discoloration in the deck, which I love. One thing I have not liked about contemporary RWS replicas is how bright and garish the colors can be. The Centennial deck is subdued, and although the difference is very subtle, the impact on my senses is substantial. 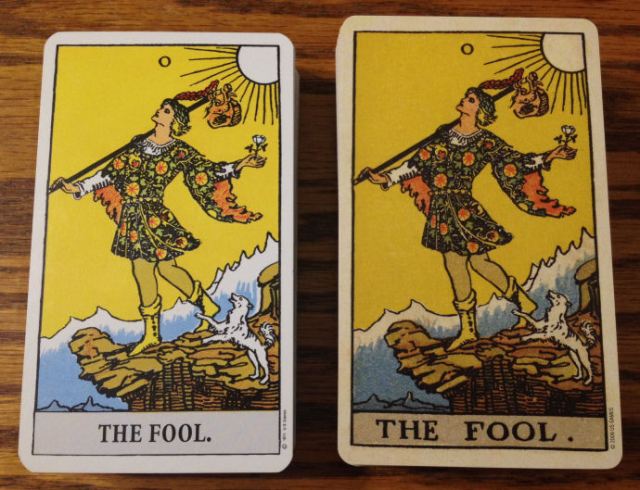 It’s also just a touch larger. You’ll also note that, since the Centennial is a replica of the original, the captions at the bottoms of each card are based on the original by Smith, not the subsequent font added by U.S. Games as seen on the right. 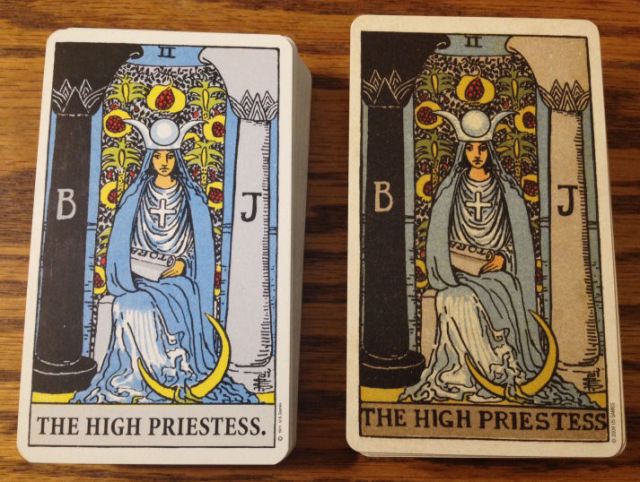 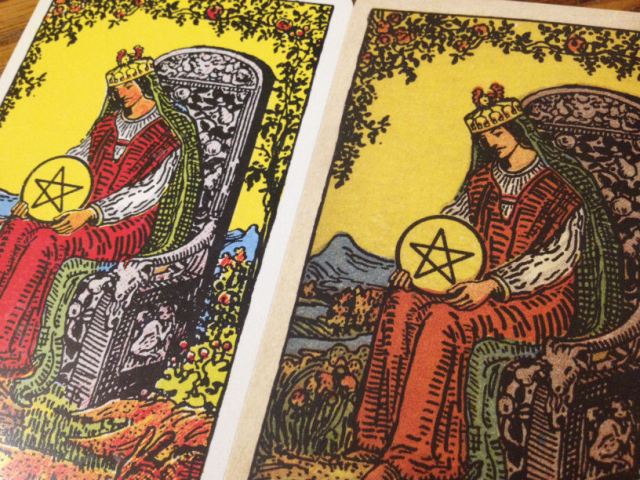 For those who otherwise find the RWS imagery difficult to work with, it could be because of the version of the replica you’re using. This Centennial deck is subtle and there’s something about it that renders the art a lot more palatable than some of the contemporary printings. 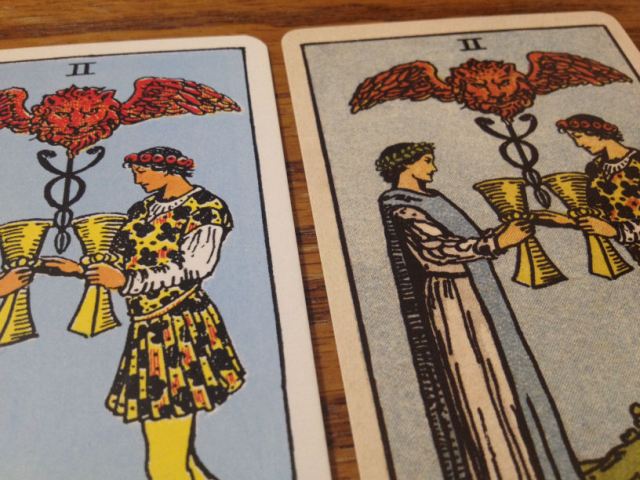 The Waite-Smith Centennial deck is just beautiful and a great deck to work with. The Pictorial Key is a text that every RWS reader should have and Kaplan’s book on Smith is packed with cool information.

For example, I didn’t know that Smith’s artwork was influenced by Japanese ukiyo-e woodblock prints, which were stylistically flat with bold colors and sharp lines…just like Smith’s art.

If you’re a fan of the Rider-Waite-Smith deck, then this Centennial deck replica is worth getting.

17 thoughts on “Review of the Pamela Colman Smith Commemorative Set”