The Radiant Rider-Waite Tarot is aptly named. The colors are brighter and there is a wholly modern feel to this deck. The deck is laminated, glossy, and is printed on relatively sturdy cardstock. Holding the box, there’s a cheery vibration I get from it. The deck has a lot of great energy to offer a tarot practitioner.

I purchased the Radiant Rider-Waite because it comes highly recommended by some of the most acclaimed tarot professionals of this decade. I was looking for a professional tarot reading deck in the RWS tradition, one that would strictly be a Rider-Waite-Smith clone. I’ve started to get antsy about having too many random folk fondle with my original Rider Waite deck and my Golden Universal has been getting a lot of mileage, wear and tear as well. So I need a new professional reading deck I can use and let people play around with.

I was really, really hoping the Radiant Rider-Waite would be it. 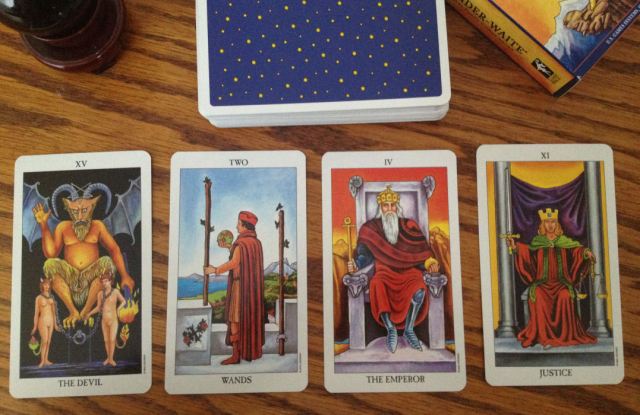 Why not? It has nothing to do with the artwork, by the way. The artwork by itself is lovely. Compared to the original art by Pamela Colman Smith, this version, which are updated, vibrant recreations of Smith’s art by Virginjus Poshkus are superb. Poshkus thinned out the harsh black outlines from the Smith deck, added subtle shading, and recolored the deck so that now the images pop. There’s a bright, positive energy here, and I can see how it’s a great energy for young beginners in the RWS tradition to be working with. (And I do mean young beginners. I’m doubtful how well received this deck would be to mature beginners.)

See, there’s also a cartoony vibe going on that I’m not sure works for me in a reading deck. The cartoonish renderings are distracting to me. Yes, Smith’s art isn’t fantastic, but the original RWS serves its purpose. The two-dimensional imagery in the original RWS and austere lines help me tap into my intuition. The vibrant cartoons in the Radiant Rider-Waite? Not so much.

Here is a head to head comparison between the original RWS Page of Wands and the Radiant Rider-Waite update: 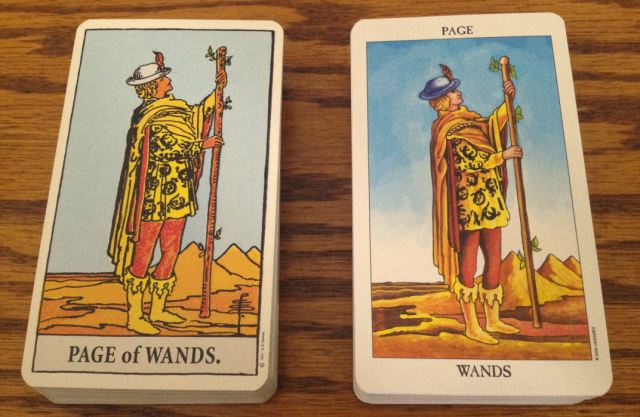 Now there’s shading, softer lines, and bright, bold coloring that’s visually stimulating. Check out a few more examples, the Eight of Pentacles and the Key VI: The Lovers. You’ll note the “original RWS” version photographed here is still a modern version, with the labels now printed rather than hand-written as it was in the original original. Nonetheless, in the version on the left in these photographs, the typeface is subtle, not noticeable. In the updated version, as you see in the Eight of Pentacles, the wording spells out for you what each card is… you know, like, in case you can’t read roman numerals or have no clue which suit the pentagram-inside-the-yellow-disc might indicate. 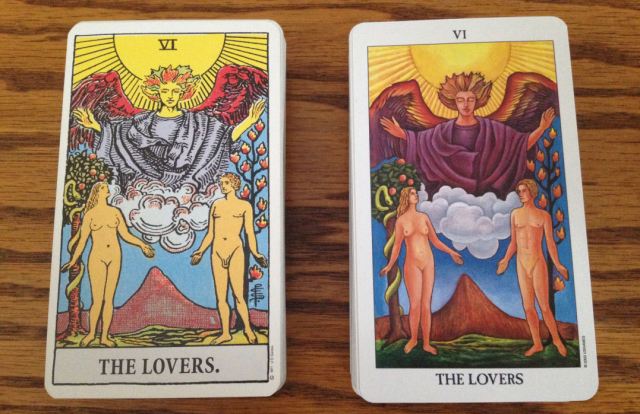 The deck arrived in the mail over the Thanksgiving break, while my sister was visiting. She’s a corporate attorney working in Big Law with no experience in tarot. She glanced through the Radiant Rider-Waite and said it looked cartoony and she didn’t much like the imagery. I later used the Golden Universal Tarot to read for her and her boyfriend, and when she saw the Golden Universal, said immediately how much more she liked the Golden Universal. “I can’t explain it,” she said, “it just looks more legit to me. If I went to a tarot reader and she pulled out that cartoony deck, I wouldn’t be impressed. This deck you’re using now [the Golden Universal] looks uber impressive to me.”

I confess being quite disappointed in this deck. I don’t like it for professional reading purposes because it’s a little too bright and peppy to be compatible with my personal style and it’s not like an interesting reinterpretation of tarot that I can appreciate (after all, this is a straight up clone). So I just don’t know what to make of it. The optimistic feel of the deck would make it one I’d feel comfortable giving to a prepubescent who was interested in learning tarot, but I wouldn’t say it’s a good reading deck for children, because the Radiant Rider-Waite does keep to the imagery of the original Death, Tower, Devil, Ten of Swords, Three of Swords, etc.

However, I want the deck to speak for itself. I did a reading, asking the deck for its own defense and boy did it get defensive!

Nine of Cups in the center flanked by two strong kings, the King of Wands and the King of Pentacles. I don’t know what you’re making of this reading, but that King of Wands is saying to me, “Beotch, what are you talking about! I’m great for professional tarot readings!” The King of Pentacles seems to second that sentiment. The figure at the center of the Nine of Cups, and at the center of the spread, has his arms crossed as he declares on behalf of the deck its own spiritual and emotional utility.

I may not be a fan of this deck, but there’s a reason the Radiant Rider-Waite is a bestseller year after year. For many, it’s going to be a welcomed rendering of the RWS tradition. You can learn the RWS system of interpretation without having to work with the original artwork, which I know turns off a lot of beginners. The Radiant Rider-Waite serves as a great buffer deck. Use it to get acclimated with the imagery of the RWS and then from there, explore to find the deck that best speaks to you. I have a feeling one of these days soon I’ll be encountering a young girl in her late teens or early twenties or something who expresses an interest in learning tarot. For such a girl, I might just hand her my copy of the Radiant Rider-Waite. After all, I won’t be getting much use out of it, whereas it would be fantastic for just such a beginner.

20 thoughts on “A Review of the Radiant Rider-Waite Tarot”