I cannot believe it’s taken me until 2021 to share my thoughts on the Russian Tarot of St. Petersburg. This deck was first published back in 1992 and was among my first and earliest collection of tarot decks. I loved this deck so much. It’s one of those decks that summon up the perfect atmosphere when doing public tarot readings. 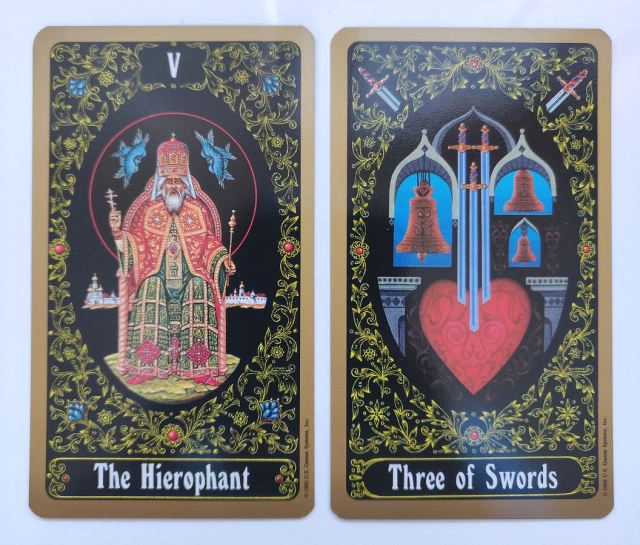 These are Russian Palekh miniature paintings done by Yury Shakov (July 15, 1937 – March 10, 1989). Palekh miniature painting is a form of folk lacquer art done with tempera paints and varnish. Shakov specialized in this particular medium and the artwork on the Russian Tarot of St. Petersburg was his final commissioned work before he died. However, I also read that he didn’t finish this deck, and that another artist picked up where Shakov left off to complete these paintings.

In the Majors, you’ll find historical and cultural references. The Hierophant, for instance, features Saint Duke Vladimir holding a scepter and a Russian Orthodox cross.

The Death card depicts a rotting head on a battlefield, a reference to the head in Alexander Pushkin’s “Ruslan and Ludmila.” The princess Ludmila is abducted by an evil wizard and Ruslan, a courageous knight, rides off to save her. On his quest, Ruslan encounters a giant talking head, who turns out to be the brother of that evil wizard.

The deck takes its cues from the Rider-Waite-Smith, which is why I’ve always found it easy to read with. I forgot to include photos of the Little White Book (LWB), but I assure you you’re not missing out too much. In terms of any added value, it does include card meanings for upright and reverse. The King of Cups, for instance, indicates a learned professional or religious person, such as a lawyer or scientist, though could also be an artist. (Gee, that covers a lot of ground…) The Queen of Cups is a warm-hearted and fair person with the gift of vision. 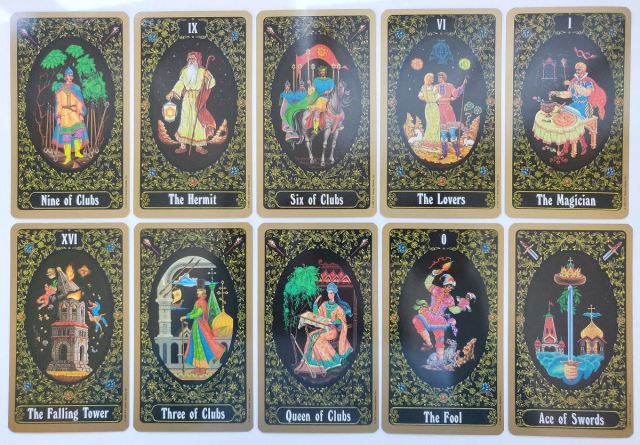 Each painting you see here was done at actual size. That’s right. What you see on the tarot card as you hold it in your hands is the exact size of the original painting.

To do this type of art, the painter has to wear an arm brace to keep the hand steady, works with a magnifying glass and, at times, uses a paintbrush made of a single hair. Just for that premise alone– deck art featuring Russian Palekh miniature paintings–is worth acquiring this deck for your collection.

The LWB does offer some insight into the cultural references, albeit sparsely. The Falling Tower’s imagery here is an allegory for the fall of the Russian Empire in 1917. The booklet will explain how The Fool card depicts a skomorokh, or a Slavic harlequin. The puppet in the skomorokh’s left hand is a doll image of himself, and he wears bells on his clothing so people know when he’s coming. It’ll also point out  that the double-headed eagle on the Empress’s shield in Key III is symbolic of the Russian Empire. (You can see The Empress card below, in the photo of the card set with the High Priestess.)

The card photos in this post are randomized and not in any particular order– or they’re in the randomized order I last left the deck in years and years ago.

I love that The Moon card features Charon, ferryman for the dead, steering his boat down the dark river Styx. I always get underworld vibes from the tarot Moon card, but you don’t always see that interpretation expressed by other tarot readers.

The top corners of the cards indicate the suit. Majors feature the blue flowers, and then the four suits bear their respective symbols– the clubs, cups, swords, and coins. This further adds to the readability of the cards. The first thing I’ll notice in a card spread will be the estimate tally of Majors, Wands, Cups, etc. and what the elemental composition of the reading conveys. 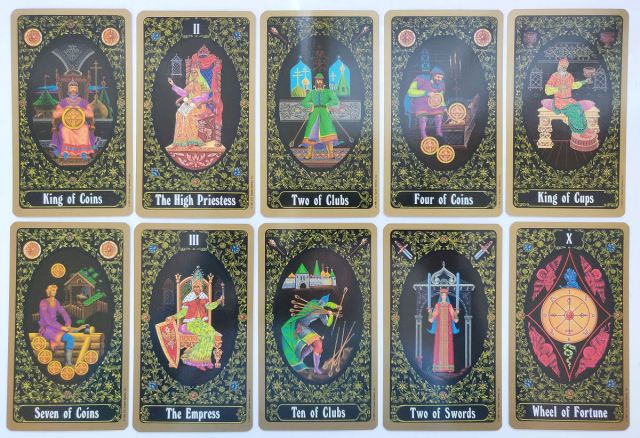 The High Priestess card features Saint Olga of Kiev, Equal to the Apostles, Grand Duchess of Kiev. The illustrations lend themselves well to everyday or popular reading uses. The Four of Coins here, for instance, goes with the more fortune-telling interpretation rather than the esoteric, i.e., it shows a hoarder or usurer, someone obsessed with the materialistic.

The Ten of Clubs (Wands) here is about being under a lot of pressure at work at the moment, but rest assured the problems will soon be resolved. There’s another aspect to interpreting the Ten of Wands that I like here– this card can also be about using your power for selfless, altruistic, greater-good reasons. I’m going to be adding that to my personal tarot journal of card meanings for the Ten of Wands! =)

The above is just to give comparison between a famous-painting-version of St. Olga of Kiev and how she’s depicted in Key II: The High Priestess.

You can click on these photographs to get a zoomed in close-up view at the details. Normally I’d say I’m not a fan of decks with so much ornate border, where the tarot illustration is so tiny on the card, but here, it’s perfection. I love how it looks. I don’t mind the ornate borders at all. In fact, it adds to the 18th and 19th century Palekh style and character.

This deck does go with Strength for Key 8 and Justice for Key 11. The art in the Minors are also faithful to Pamela Colman Smith’s compositions and Waite’s tarot interpretations.

Some more fun details from the LWB: The background of The Star card is “a Slavic field camp.” Unfortunately I don’t know enough about Russian history to understand its reference on The Star card. The booklet also points out that the main star pictured in this illustration is Sirius.

The Devil was intended to resemble Josef Stalin where the “two eyes on his chest are the vigilance of the secret police. The Devil’s chains trap a man and a woman, deprived of civil rights.” Meanwhile the Judgment card features the archangel Gabriel. This comes from the Eden Gray school, attributing Gabriel to Key 20 (Mastering the Tarot, 1971). 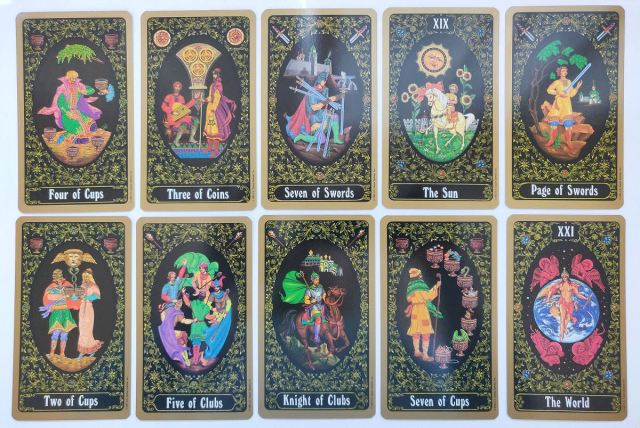 Handling these cards again after so many years is nostalgic. They look great in spreads across your reading table and add to this ambiance of mystique that querents love. In terms of production value, the copy from the print run I have was printed in Italy on cardstock that feels like 350 gsm, which is sturdier than  today’s standard mass market cardstock. The tuckbox itself features embossed gold leaf, and I recall, back in those days, that was rather unique.

When this deck was in my ordinary rotation of workhorse reading decks, my only gripe with it was the non-reversible card back design, because I read with reversals.

Anyone else who played around with tarot cards in the 90s and early 2000s have this deck? Now come to think of it, I’m perplexed at why the Russian Tarot of St. Petersburg didn’t continue to remain popular. You almost never hear about it these days.

ARCHIVE OF ALL DECK REVIEWS

9 thoughts on “Russian Tarot of St. Petersburg by Yury Shakov”