Pistis Sophia: The Goddess Tarot is a 22-card Majors only deck by Kim Huggens and Nic Phillips, published by Schiffer. Pistis Sophia is the sequel to Sol Invictus: the God Tarot published by this duo over a decade ago.

The namesake for the deck comes from the Gnostic text Pistis Sophia, a compilation of narratives on the aeons and cosmology told through the stories of a feminine figure, Pistis Sophia.

The intention set for this deck was to take on a more hard polytheist approach to the goddesses, where the named goddesses are not mere faces to universal divine feminine concepts, but rather, are the goddesses themselves, in their own individual identifiable right.

What also sets Pistis Sophia apart from other goddess decks on the market is the creators’ scholarly approach. This becomes most apparent in the companion guidebook, which is a treasure trove of knowledge and impressively well-researched insights. The book itself, before we even get to the incredible artwork on the deck, is well worth your investment.

Each card entry is subdivided into two main sections, “As Above,” which provides comprehensive, invaluable discourse about the goddess in Her cultural and historic context, and then the section “So Below,” which gives the tarot card meaning. 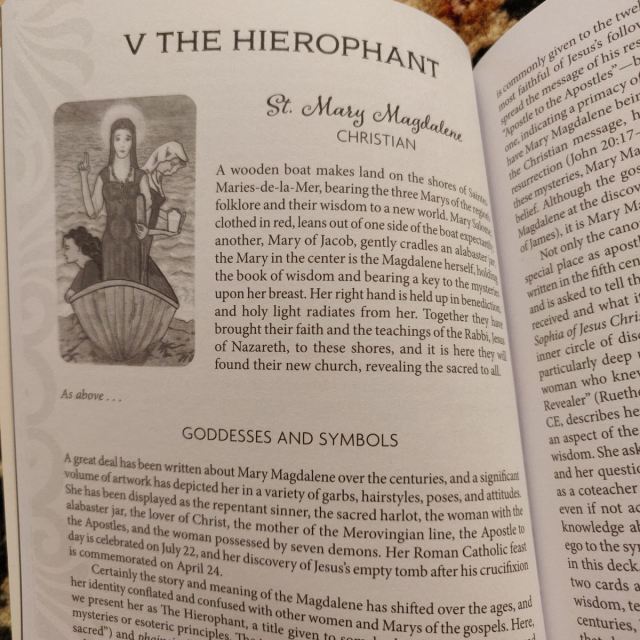 The book is incredible. You want to get this deck for the book, especially if you have an interest in the study or veneration of goddesses from cultures around the world. The extent of research that went into this 132-page book (guestimating here, there’s approximately 200+ sources cited, which you can find in the bibliography).

In one of the early chapters, we get a comprehensive statement of purpose for the deck. The intended audience isn’t just for women, feminists, and goddess worshippers, but rather, it’s an in-depth inquiry into how the divine feminine is expressed in tarot archetypes. And to that end, Pistis Sophia absolutely delivers.

Getting this deck set and resolving to make your way through the book, goddess by goddess, as part of your spiritual studies, is going to be worth your while. Huggens has done the work for you, condensing a wealth of knowledge into a digestible and easy to read guidebook.

Then we get to the artwork. Wow! I’ll select a few to focus on.

In The High Priestess card, a key manifested in Sophia, the top of the temple reads: “I am the hearing which is attainable to everyone and the speech which cannot be grasped.” Along the bottom: “I am a mute who does not speak and great is my multitude of words.” 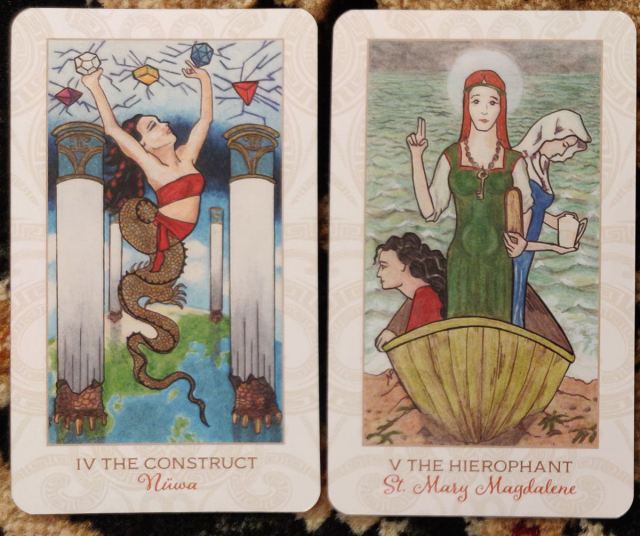 The way NuWa is illustrated here shows so much attentiveness to Her mythology, honoring her for who she is to the Chinese, with a great deal of effort taken to remove the Western or Eurocentric gaze. Like the conscientiousness to depict the continent of Asia and specifically China below the four pillars of heaven and even the touchdown point in waters, symbolizing her origins story.

I want to take a minute to extend a heartfelt thanks to the creators for including many different facets of Asian divinities in this 22-card deck. I’m so used to only getting one token card presumably added as an afterthought to tick a box of inclusivity that when I see a representation that reflects world demographics, I’m overjoyed, and touched. When deck creators have put in this much time, and effort, thought, and attentiveness to bringing aspects of my culture to tarot life, I feel seen. So thank you. ❤

I love the detailing here, which you can see showcased in Key 6: The Sisters, from Yolngu Australian aborigine tradition. The renaming of certain Key titles also works for me, like The Emperor to The Construct, and here, The Lovers card to The Sisters. Later you’ll see The Hanged Man title changed to The Mystic, Temperance changed to Alchemy, and so on. 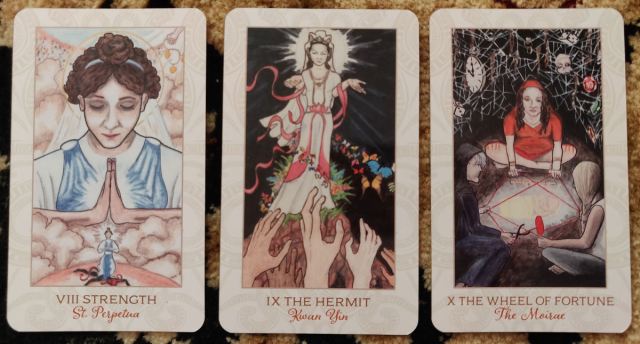 I love this representation of Kuan Yin because Huggens and Phillips have fully honored what I’ve always seen as the essential attributes of Kuan Yin: the light that illuminates in the darkness, and one who extends a merciful helping hand when you need it the most.

When I work with this deck and admire its art, I get nostalgic for the 90s. In fact, the art style here is reminiscent of abstract spiritualism, an offshoot of magical realism that was popular in the 90s. Think in the spirit of Robert Wang’s Golden Dawn Tarot, or Kris Waldherr’s The Goddess Tarot, or the Wise Woman’s Tarot by Flash Silvermoon. Of course, Phillips has a style distinct from the aforementioned, but there’s a spirit that’s similar, putting these decks in the same genre, one that just reminds me of the 90s.

I’m deeply appreciative of the multi-faceted representation of the divine feminine here. More often than not, especially among popular mass market decks, anything pitched as “goddess” or “divine feminine” is going to be pretty, pink, and flirty, with a very one-note point of view on what “feminine” means. Pistis Sophia is none of that. And the aesthetic here is religious art, not pop art, or high fantasy, but rather, a beauty that emanates from within.

The artwork here is just breathtaking. I’m loving how Ma’at is depicted here, both humanized and in the spiritual abstract. You’ll find that balance throughout the deck, portraying Goddess in a humanized form for statuary worship, and also depicted as the unseen energy that pervades through the universe.

I love the sense of dynamic movement in these illustrations. These goddesses feel alive, active, and the card themselves are animated. There’s a third dimension to these two-dimensional images. 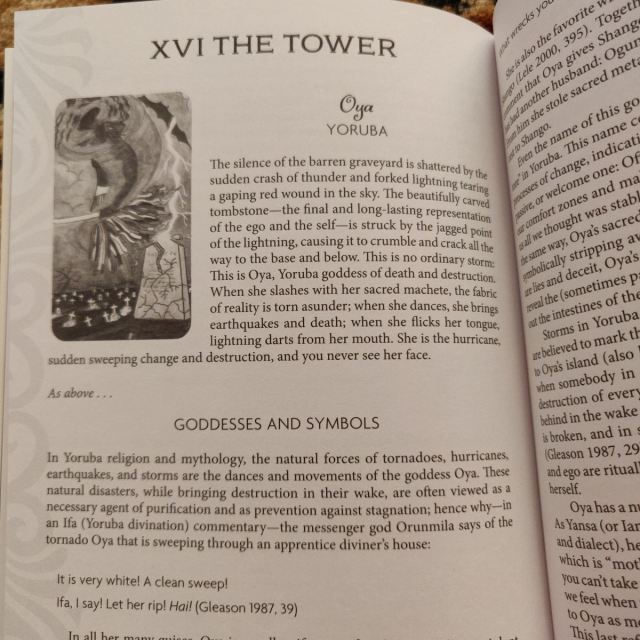 Every work of art here brilliantly utilizes symbolism and imagery to articulate the essence of the named goddess and relates it to the tarot Key.

Although I don’t know for sure (I was looking for an artist statement or some notation of medium used, but couldn’t find it), I believe this is hand-drawn traditional art. Something in the style here also reminds me of Giorgio de Chirico’s metaphysical art, art that sings like a requiem.

I’m intrigued by the choice of including Ushas, the Vedic Hindu goddess of dawn for the tarot Star card, then Inanna for Judgement (renamed to Rebirth), and then Nut for the World card (The Universe). More commonly, esoteric tarot decks will connect Nut with The Star, and then of course Inanna and The Star has just become a commonplace association. With so much, well, stellar energy in this Majors only deck, I feel it bonded even closer to the spirit of Pistis Sophia and a cosmological creation story unfolding.

The deck would be a great one to work with for altar cards. I have several tarot and oracle card altar stands from Jamie Sawyer (check out her Etsy shop). The artwork and intention-setting for Pistis Sophia means it’s ideal for display and study. 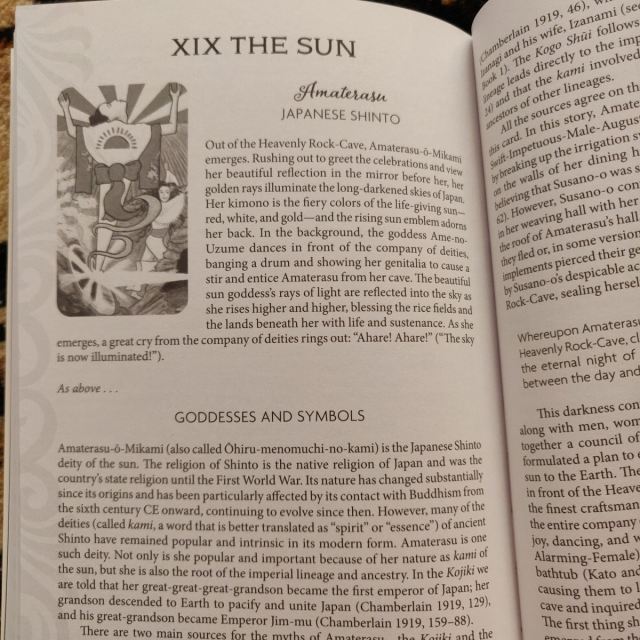 By the way, I love that ukiyo-e style utilized for depicting The Sun card, Amaterasu.

In terms of product design, subjectively, I don’t like high-gloss finishes on anything intended for sacred work.  Aesthetically I just prefer a matte finish. High-gloss finishes on decks can work if you’re going for that ultra-sleek, modern point of view, and can add value to minimalist or abstract art, but glossy shine (I feel) takes away from Phillips’ art style in Pistis Sophia.

Also, since this is a Majors only deck and given its premise, it would have made more sense to create a larger size deck, oversize even. That way the consumer could use selected cards for their altars. The artwork done by Nic Phillips is so evocative that I feel like the standard card size these were printed in does a great disservice to the art and limits its potential in the hands of the consumer.

I forgot to make mention of the card back design, mainly because I think I forgot about it. That’s not a bad thing at all. I like it when card backs are understated and not distracting. Here we’ve got a simple ornamental reversible pattern for the card backs. The orange color is an interesting choice. I think you’re either going to love it or you’re going to be quite meh about the orange.

There’s a raw realism of what goddess energy is, conveyed in the artwork through surrealistic, often abstract means. The style does change slightly from card to card, but in a multicultural pluralistic goddess deck, the variable assortment of artistic style works.

If you’ve been searching for a goddess-themed tarot deck (albeit Majors only) that takes a scholarly approach and is decidedly hard polytheist, then you’re going to love the Pistis Sophia Goddess Tarot. As Huggens puts it in the guidebook, this deck was to “reunite the divine feminine with academia and the process of research.” If the divine masculine is associated with logic and clear thought, then the divine feminine is creativity and imagination. The Pistis Sophia is a celebration of creativity and imagination through a dream-like sequence of art with a guidebook you are sure to cherish.

FTC Disclosure: In accordance with Title 16 of the U.S. Code of Federal Regulations Part 255, “Guides Concerning Use of Endorsements and Testimonials in Advertising,” I received the deck and books set from the publisher for prospective review. Everything I’ve said here is sincere and accurately reflects my opinion of the deck.