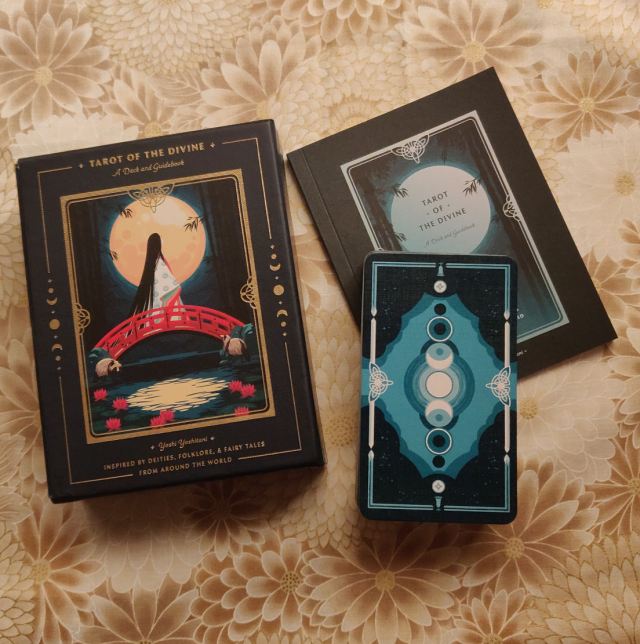 Tarot of the Divine by Yoshi Yoshitani has become one of the magnificent tarot gems of 2020. And for me in particular, it’s a special kind of joy to encounter a fellow Asian American who is also into the tarot.

The deck is published by Clarkson Potter, an imprint of Random House. The Big Five publishing houses are taking a greater interest in tarot, witchcraft, New Age spirituality, and the occult, whereas back in the day, it would be just the specialty publishers like Llewellyn, Weiser, Hay House, Schiffer, or U.S. Games publishing tarot and oracle decks. That this deck was picked up by one of the bigger publishing houses was another factor for my intrigue in this deck.

I love the color palette– bold, bright, with just a touch of whimsical magic to awaken your inner child. The combination of Yoshitani’s illustration style, the enormous amount of research that went into this undertaking, the fairytales, and the tarot is a stroke of divine genius. 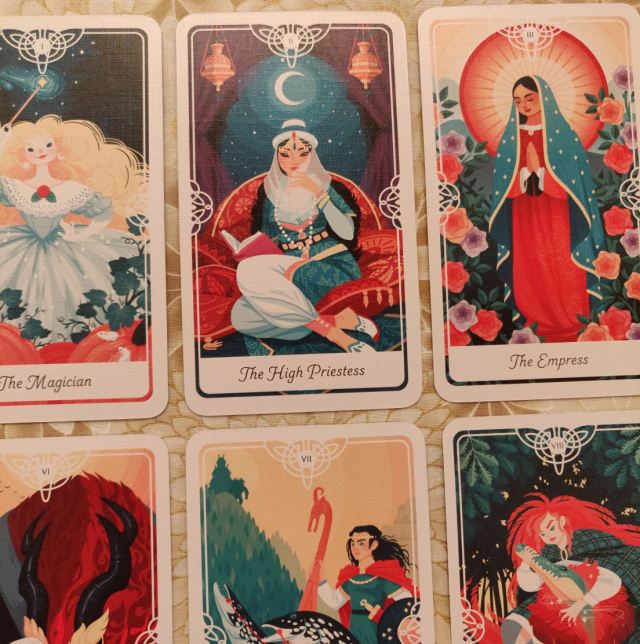 While I can’t validate one way or the other how period-accurate the figure depictions are respective to each fairytale’s culture of origin, I would say that the imagery will feel familiar. Plus, these are fairytales and myths. You want that element of fantasy here!

I had wondered and debated whether the name of the legend referenced should have been printed in small font underneath the tarot card titles. Ultimately, that’s such a matter of personal opinion. I think I would have preferred an additional line on each card noting the deity or folklore, but I can also see why a deck creator would opt to leave it out.

I just talked about Scheherazade in my review of the Edgar Allan Poe Tarot! She’s making quite the repeat appearance throughout 2020! I love it!

The deck’s guidebook is a wonderful introduction to the deck. I believe there’s a bigger and more in-depth book on the fairytales references in the deck, but I didn’t receive that book for review, so I’m only working from the little guidebook. I love that it’s in full-color, gives you the names of the fairytales and myths referenced in each card, why she went with that correspondence, the country and culture of origin, and a few keywords on the tarot card meaning.

One thing I’ll be leaving out of this review is what I think of the stories to tarot card correspondences. No two tarot readers are ever going to agree, and there’s no right or wrong on that count, only different perspectives. And sure, based on the deities, fairytales, and myths I’m familiar with and how they’ve been assigned to the tarot cards, I see that she and I have different perspectives. But I can follow the reasoning of hers and at the end of the day, Yoshitani has produced a tarot deck that reads very well. I had no trouble doing practical, everyday readings with the Tarot of the Divine. 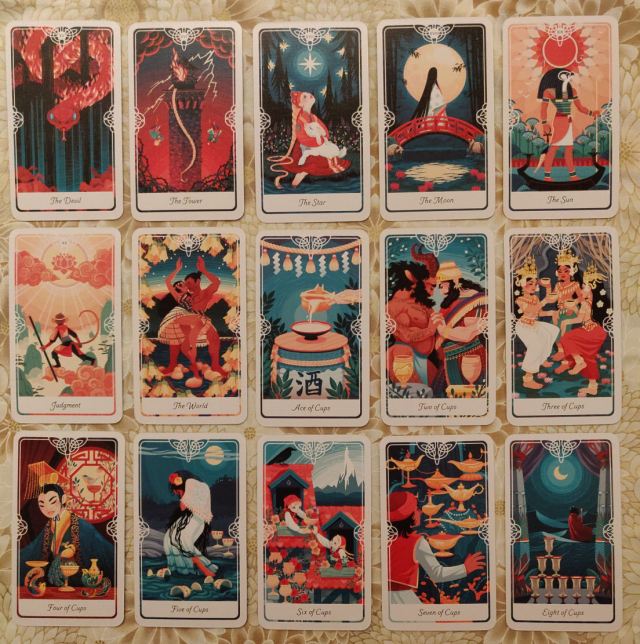 What’s so artfully done about this deck is the many levels of operation it offers. This is an art collector’s deck, one you’d easily find on a coffee table in a yuppie’s living room, irrespective of tarot knowledge or even interest. There’s something widely appealing about Tarot of the Divine. 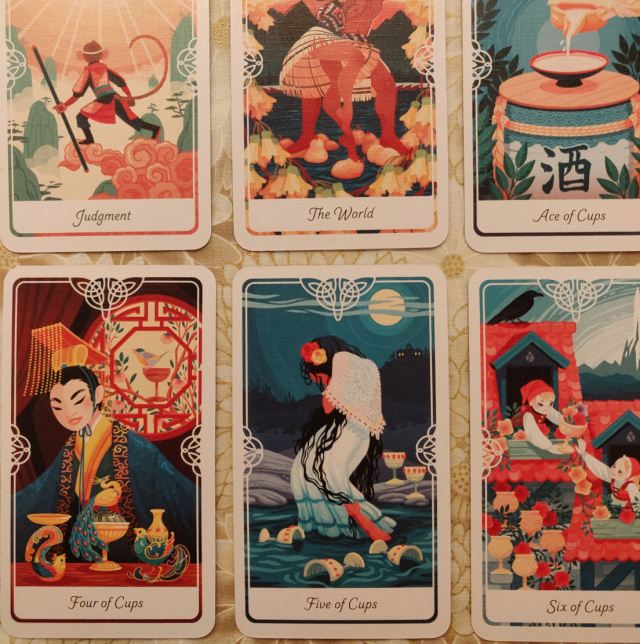 And yet a lot of thought and research has gone in to the design of this deck, and so a seasoned RWS tarot reader will be able to read these cards with ease. Yoshitani has kept true to classical RWS imagery, as you can see from the photographic walk-through. 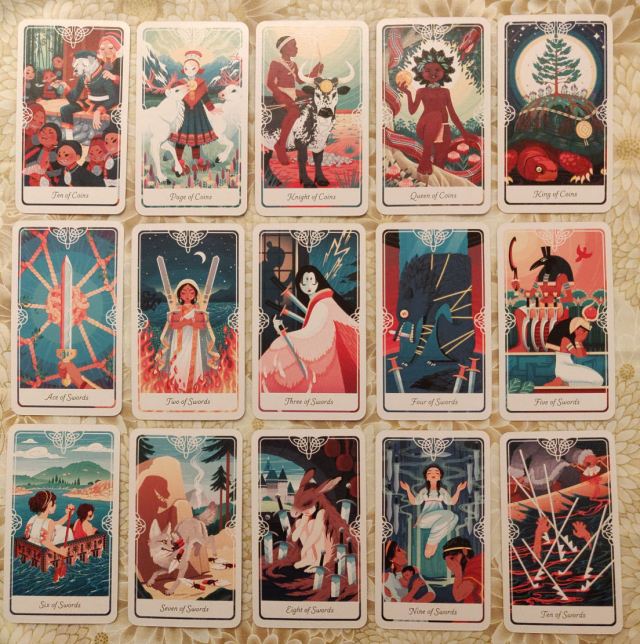 Now, if you’re familiar with the tales being told in each card, and you’re familiar with the tarot, the Tarot of the Divine opens an incredible new door of divinatory readings to you. Because there’s something empowered in fairytales that have been told, over and over, repeated throughout time and space, for centuries and generations, weaving that magic into the tarot magnifies what that tarot deck can do, and that’s what Yoshitani has achieved here. 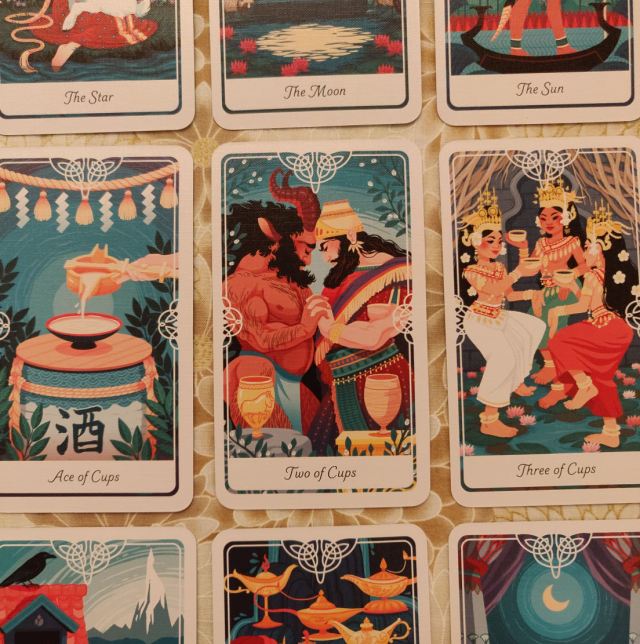 From the color palette the artist has chosen, and how consistently that palette is maintained throughout conveys the precision of intention-setting here. This is a deck of warmth, innocence, that will take each one of us back to when our hearts were a little purer, a little kinder, and maybe, just maybe, Tarot of the Divine will contribute to stitching the collective back together, toward solidarity. 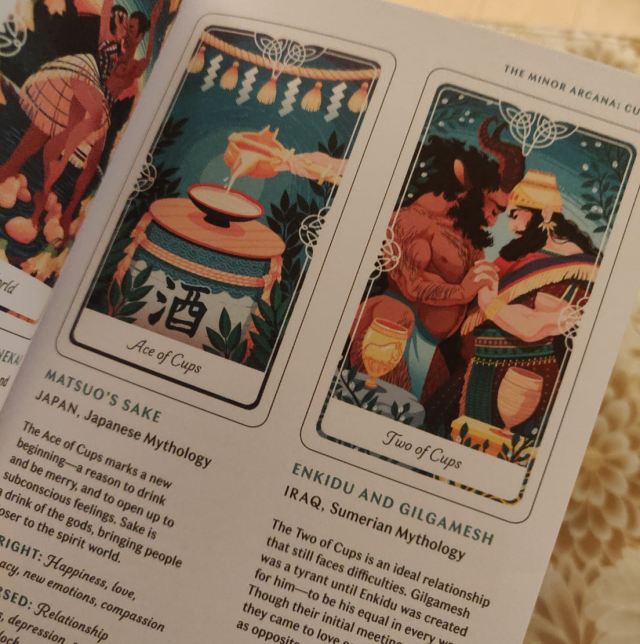 Totally random “by the way”– Gilgamesh and Enki has always been one of my favorite stories. I chuckled when I saw the two depicted on the Two of Cups. I always felt, gee, these two have a really, really, really strong friendship. Which, hey, I so love! That’s why this pictorial interpretation here brings me such joy.

I took interest in the commentaries from the tarot community in online discussion groups about this deck. Some of the countries of origin and also the way the fairytales were told, or deity powers and correspondences allegedly did not match up to what people believed to be right.

In terms of the specific version of each tale that’s told in the companion guidebook, we have to keep in mind that there are multiple versions for all of these tales, depending on source. So even if the version of the story being told isn’t the one you’re familiar with, it doesn’t mean it’s wrong.

As for country of origin to the plot details of each fairytale, I tip my hat off to Yoshitani for her diligent research and hard work. From just the minimal amount I know, that’s not an easy task, at all. Stories travel, and for most of early history, traveled orally. Anyone who has ever played the game of Telephone in childhood can maybe commiserate. Just from my knowledge of the East Asian and South Asian myths told in this deck, sourcing true origins isn’t easy.

I had heard some grumblings from vocal, well-respected members of the tarot community who voiced their concerns about the cultural depictions in this deck. My personal opinion is this deck is beautifully and tastefully done. It demonstrates a sense of deep, sincere admiration for the vivid stories and mythic figures that cultures around the world have contributed to the collective.

Whether the fable chosen to correspond with each of the tarot keys “fits” is a matter of subjective opinion. I didn’t approach this deck with the expectation that it conform with my prefabricated interpretations of the tarot cards. Rather, I met the deck where it was and worked with the creator’s interpretations, design, and what came to me direct from the imagery of Yoshitani’s work. And the results were powerful.

As for production specs, the matte linen finish worked with the aesthetics of the deck art, so I loved that design decision. Note that the porosity of this type of cardstock does mean that in certain levels of humidity, the cardstock will bow. The more porous the cardstock or paper used, the more this is a situation. I’ve found that being diligent about always storing my cards away after use in a space that’s outfitted with a humidifier will solve this problem.

As a go-to tarot reading deck, Tarot of the Divine delivers. I love the dream-like tones of blue in the reversible card back design. (You can see it in the first photo featured in this review, if you scroll back up.) The overall vibes of this deck is witchy, it’s magical, it’ll amplify your creativity and imagination, and reminds us of the one world that we could be.

The Tarot of the Divine was a spot of brilliance in 2020. You’ll be taken by its charm and if some of these myths weren’t familiar to you before, this deck will inspire a deeper appreciation for pluralism and the greatness of the world beyond your horizons.

FTC Disclosure: In accordance with Title 16 of the U.S. Code of Federal Regulations Part 255, “Guides Concerning Use of Endorsements and Testimonials in Advertising,” I was sent this deck by one of the deck creator’s fans for review. Everything I’ve said here is sincere and accurately reflects my opinion.

3 thoughts on “Tarot of the Divine by Yoshi Yoshitani”