Conversations with a Hungry Ghost: Memoir of a Reluctant Medium is a self-published memoir by medium, feng shui consultant, and past life regression therapist Carole Louie. She is also the founder of The Center, RVA, a spiritual growth center in Richmond, Virginia.

A slim, quick read, Conversations with a Hungry Ghost is Louie’s heartbreaking yet inspiring spiritual journey to overcome personal trauma and fully own her gifts as a psychic medium.

We begin with her father’s funeral. This is the tale of a little girl who suppresses traumatic memories, who becomes the young woman that has to bury the man who abused her and encounters his ghost at the cemetery. From there, family secrets begin to unravel as the ghost of that father begs for his daughter’s forgiveness. We jump between timelines, navigating both northern California and the southeastern region of the United States, taking us on an exploration of family history.

In the 1940s, her father worked as a chef at a restaurant, where he met the woman that would become Louie’s mother, a 22-year old waitress and 13 years the man’s junior. The story then jumps to after his death and his ghost instructing Louie on a spirit wedding between Louie’s father and his first wife’s younger sister, a woman with whom he lived with for over twenty years. Conversations is rich with Chinese cultural practices, superstitions, mysticism, and lore. This is the story of Louie’s search for closure with the living, haunting memories of her father and what he had done.

After his death, it is his spirit that comes back as a guardian and guide, leading her to her current spiritual calling. Her personal catharsis comes after finally acknowledging the trauma she had suppressed for a quarter century of her life and gaining control over the fears that were born from that trauma.

What I love most about Conversations is Louie’s willingness to share the self-doubt and personal insecurities as a young medium, questioning her own experiences, but also how to overcome those insecurities. Through dedicated training methods in channeling and meditation, alongside listening to her guides, she learned to fine-tune her gifts.

In the beginning, the messages from the other side came like the “garbled reception of a radio station,” but with practice, the voices became clearer. Louie shares with us that their primary message to us living is this: “We are not dead.”

She also shares her story of Asian American identity, of being biracial, having a Chinese father and Caucasian mother, being raised Christian, and her path to reclaiming her Chinese heritage. She descends from a family of Chinese immigrants who came to California during the Gold Rush and accounts their struggles during that time. It’s a story of reunions with long-lost siblings. The narrative echoes of Amy Tan’s Joy Luck Club if it were to meet Suzan Saxman’s memoir The Reluctant Psychic.

One thing that confused me, and I started second-guessing my own reading comprehension skills… did I miss something? Did I accidentally skip over an important passage somewhere? I wasn’t sure whether the distinction between a ghost and a hungry ghost, per Chinese folk beliefs, was ever clarified.

For instance, the account of the sororate marriage between a hungry ghost and spirit who has passed on (i.e., it wasn’t clear what the author thought the spiritual status of the deceased Auntie Tai was, the woman she was marrying her father to in spirit) officiated by two women in a rigidly patriarchal cultural tradition was beautifully told, poignant, and came from a place of sincere compassion. But in terms of storytelling and the sharing of Chinese culture, I wish the author had made it clearer how controversial that decision would be construed within a rigidly patriarchal folk tradition.

On the last page, Louie invites the reader to treat Conversations as “a living meditation.” The intentional spacing between each line of text in the book is printed there to make space for energy to saturate and reach you beyond just the words you see. She hopes you’ll experience goosebumps and “those tell-tale signals from someone on the other side.” 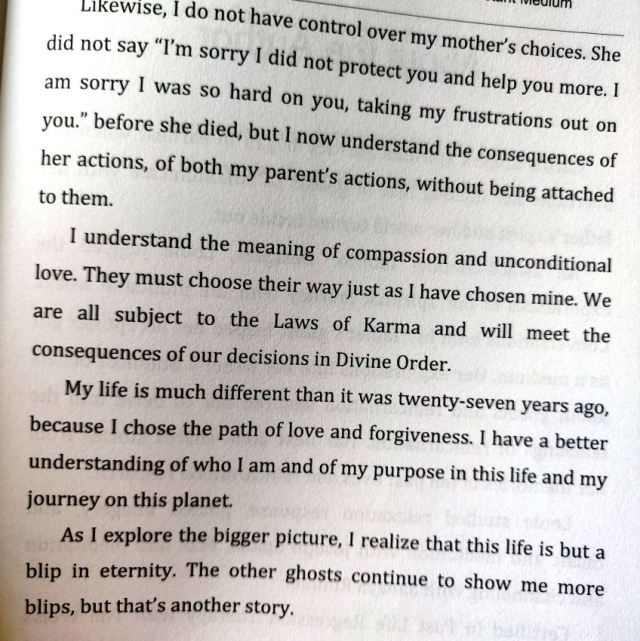 As a work of creative nonfiction, Conversations is exposition-heavy. I would have enjoyed more fleshed out scenes. That said, the title of the book, Conversations, is apt, because that’s what this book feels like– sitting at the kitchen table with Carole Louie as she retells the stories of her life. The style, the way details are selected, emphasized, or omitted are in the exact style of a kitchen table conversation, and not necessarily of a book-length fully-formed memoir. I found myself wanting more. I wanted to be transported to these places with the author. I wanted more backstory. I wanted more vivid scenes and the experience of Chinese culture and mysticism to be more immersive.

The book itself shares similar issues with layout design that most self-published books have. The editorial work felt rushed, page numbering only appears on the odd pages, and could have benefited from a professional graphic designer’s look-over. Yet those are minor quibbles that do not take away from the heart of Louie’s story.

A fascinating premise, a tenderhearted retelling of a true family saga that crosses cultures, a sororate spirit marriage as interpreted and performed by modern-day Amer-Asian spiritualists, and an introduction to Chinese American folk beliefs, Conversations with a Hungry Ghost is a beautiful homage to a complicated and layered family history, a daughter’s reclamation of a difficult past, and the memoir of a psychic medium coming to terms with her unique abilities.

FTC Disclosure: In accordance with Title 16 of the U.S. Code of Federal Regulations Part 255, “Guides Concerning Use of Endorsements and Testimonials in Advertising,” I received Conversations with a Hungry Ghost: Memoir of a Reluctant Medium from the author for prospective review. Everything I’ve said here is sincere and accurately reflects my opinion of the book.