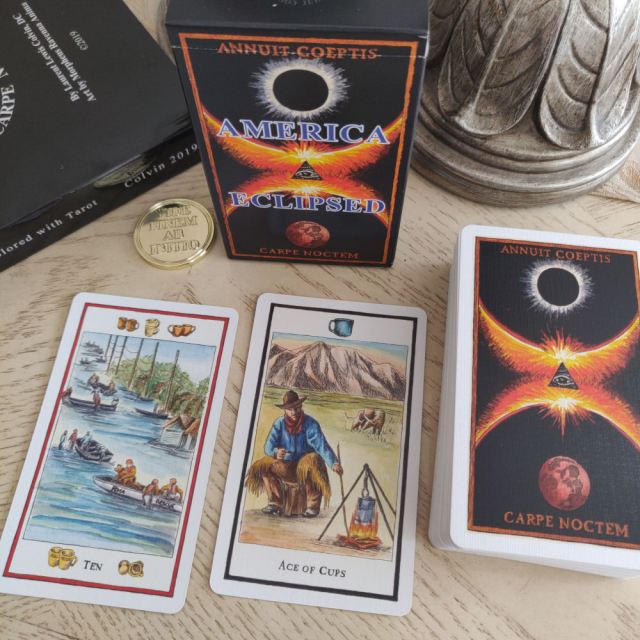 The America Eclipsed Tarot by Laurent Lewis Colvin and illustrated by Morpheus Ravenna Anima marks the confluence of esoteric tarot and progressive politics. Birthed in one of my favorite places of all time, Berkeley, this tarot deck alchemizes the energies of social justice to read prophetically about social justice. 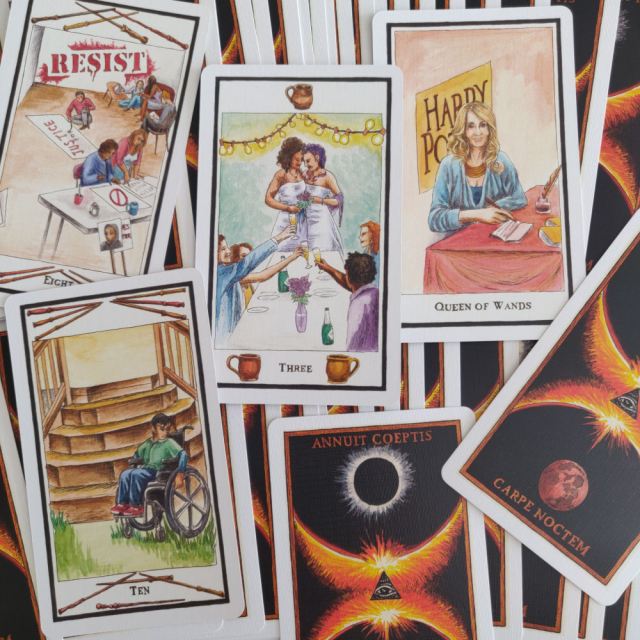 To start, take a look at Key 19 and Key 20. The Sun card expresses solar energy and how through solar power we can achieve glory and success. Key 20, which in traditional tarot iconography depicts the Rapture, here we still see Archangel Gabriel with the flaming hair, but here we see a banner with a Bernie bird and instead of the traditional coffins, we see voting booths. The ribbon around the angel’s neck is Latin for “Choosing the lesser of two evils still puts the Keys to the kingdom in the devil’s hands.”

You’ll notice how some cards have red borders while others have black. A selected 18 cards are marked with the red borders to indicate that this card, when it appears right side up in a reading, will actually convey its upside-down or ill-dignified meaning.

So, for example, since the Queen of Coins (above photo, bottom right corner) features a red border (and Hillary Rodham Clinton), when this card appears upright, it indicates a negative meaning of the classic Queen of Coins (Pentacles), whereas if it appears in reverse, it’s going to give a positive indication. 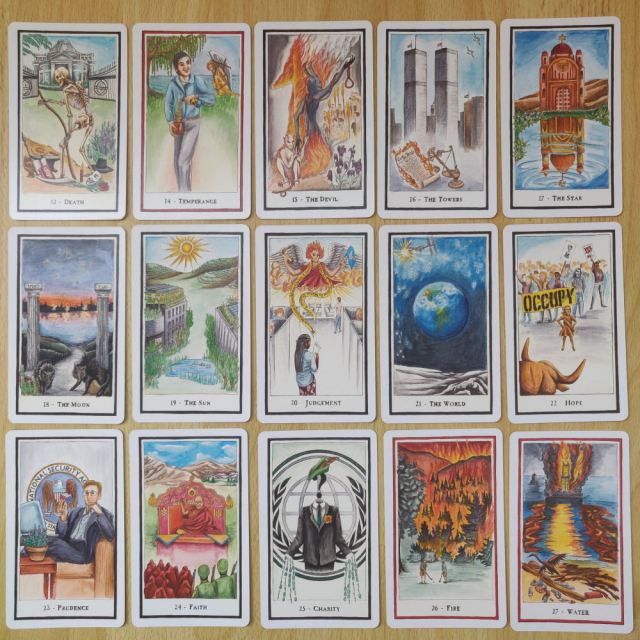 Writes the author: “America has lost her way, has deviated from her true path spelled out beautifully in the Preamble of the Constitution, and because of this, I chose to depict certain cards, 18 in all, from the perspective of their inverted meaning.”

I’ll return to addressing the extra cards in the Majors, but for now, note above the four virtues, inspired by the Minchiate decks. Here in America Eclipsed, Hope depicts the Occupy Wall Street movement; Prudence shows Edward Snowden; Faith is the Dalai Lama; and Charity is the digital vigilante group Anonymous.

The detailing on the deck art is magnificent. I love the many layers and depths through which the cards can be explored. Here, you’ll see twin pillars featured in The Moon, Hope (Spero) and Preparation (Paro). The dark of the moon is depicted here; hence, no physical representation of the bright moon appear on this card. This is such a powerful illustration of the tarot Moon.

The namesake of the deck employs the symbolism of the eclipse– an omen both of doom and of opportunity. Thus, America Eclipsed expresses the United States at a cusp, a time of great potential for social change, but also acknowledging the civil strife we face today.

America Eclipsed was inspired by the Soprafino Tarot (the Il Meneghello reproduction), the Ancient Minchiate Etruria deck, and the Rider-Waite-Smith. Like the Etruria Minchiate, America Eclipsed has 42 Major Arcana cards (as opposed to the traditional 22). Included here are the four virtues (depicted in one of the earlier photographs: Hope, Prudence, Faith, and Charity), the elements, and the zodiac signs.

Sagittarius, card 30, expresses the blood moon and total lunar eclipse on December 21, 2010, with the sun in Sagittarius. Here we see Chiron.

Bear in mind that this deck was created well before 2020. When it was created, the Scorpio card was intended to feature the presidential elections of 2020, with the implied question asked by the card: Will the scorpion sting the rat? Since the year 2020 will be the Year of the Rat per the Chinese lunar calendar.

To give another example of how to read the red border cards, take a look at the Knave of Wands, center row, right-most card above. Here, we are seeing a negative facet of the Knave of Wands, one embodying the televangelist, where that which should be sacred is desecrated by materialism.

I love that the Queen of Wands is J. K. Rowling. The Five of Wands expresses police brutality, whereas the Six of Wands, the next card up in numerological sequence, is resistance. Telling a story here, the Seven of Wands shows the arrest and oppression of those resisters while the Eight of Wands shows persistence and continuing the resistance movement notwithstanding. The Nine of Wands depicts the good work of Habitat for Humanity.

All that led up to a personal story that Colvin shares about his daughter in the book entry for the Ten of Wands about his beautiful daughter Rhiannon. The Ten of Wands pays homage to those with permanent disabilities and the social challenges they face because as a society we can’t be bothered with the compassion to accommodate just a little more to their needs. 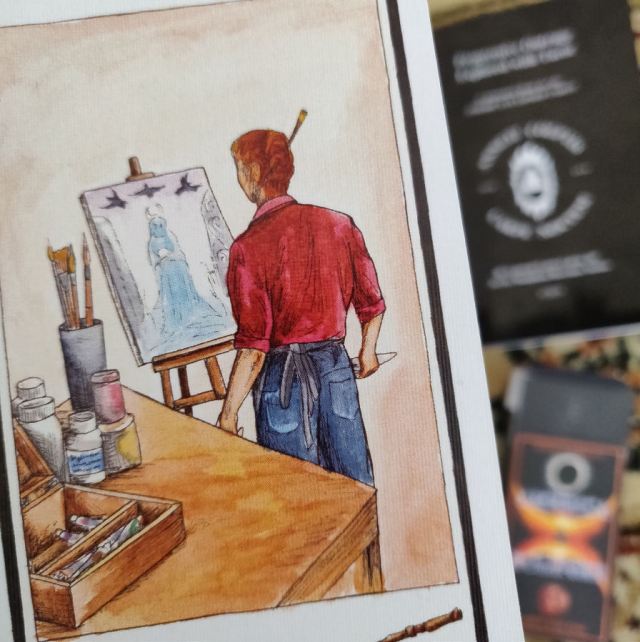 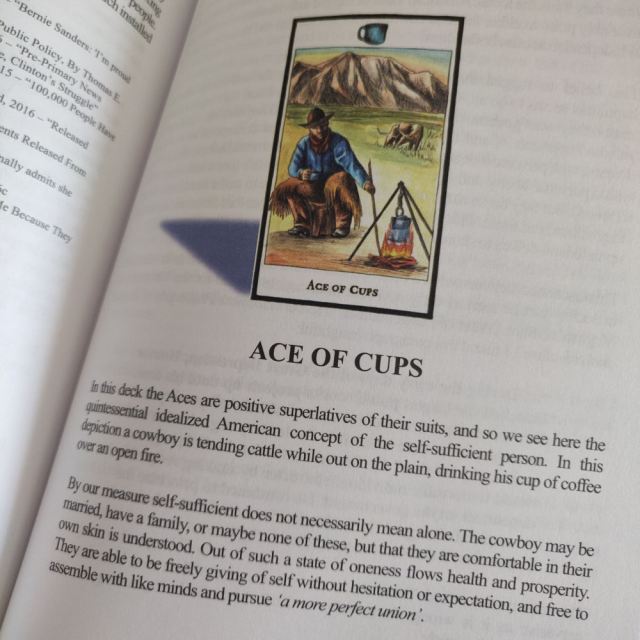 This takes us to the companion book for the America Eclipsed Tarot. Progressive Outrage Explored with Tarot (2019) is one of the most incredibly thorough, memoir-esque, and poignant tarot guidebooks you’ll come across. It’s a memoir of our times, and it’s the deck creator’s memoir as well, told through the picture book of tarot.

Meticulously cited, researched, and yet vulnerable with sincerity, emotion, and personal stories, Progressive Outrage Explored with Tarot is a powerful read.

In the Four of Swords, you’ll see Colin Kaepernick; the Five of Swords tells the story of the American government using private mercenary groups such as Blackwater. The man in the suit you see is Eric Prince. The Six of Swords, because it features the red borders here, takes on a sinister meaning: here we see figures sporting MAGA hats and toting AR-15s. The Seven of Swords features Debbie Wasserman Schultz.

Each and every one of these cards reminds us of a moment in modernity that is shaping who the United States is becoming and why now is a moment of eclipse for the country. I could go on and on about just how much thought went into every single card in this deck.

Psst… love that the deck creator was inspired by the card meanings for the Minor Arcana cards from Holistic Tarot. =) 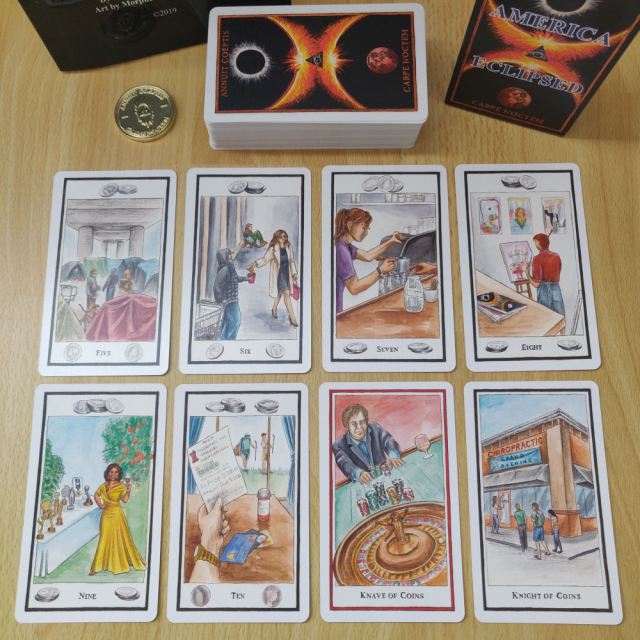 I love the creativity and ingenuity behind this tarot deck, blending the Minchiate, which you don’t see often, with progressive politics and social commentary on the state of affairs here in the U.S.

Colvin delves further into the cards on his Card Blog, which you can read HERE.

Although politically I am more centered than the politics expressed in the America Eclipsed Tarot, my politics does not bar me from deeply appreciating the perspectives presented by Laurent Lewis Colvin and Morpheus Ravenna Anima. There is so much positivity, hope, compassion, and reasoned thought behind this deck that it reads beautifully.

The artwork is emotionally powerful. The mechanics and logistics are well thought out. And the companion guidebook is impressive.

Buy the Deck and Book Set