The Ancestral Path Tarot by Julie Cuccia-Watts first came out in 1996, published by U.S. Games. At the time it was a bordered deck and had a different card back design. This year the deck has been re-released, now borderless and with a beautiful new card back.

There is both a 90s throwback vibe to this deck and a timeless quality. Ancestral Path reminds me of the way multiculturalism was celebrated in the 90s. You’ve got original works of art done by hand, with minimal digital retouching, not like the majority of decks we get today, which involve heavy-handed amounts of digital work. One isn’t better or worse than the other; it’s just iconic of different times.

Note here that Key 8 is Justice (and Key 11 is Strength). Ancestral Path is a fusion of different deck systems, which will become a bit more apparent when we get to the Minors. Here, though, I love the emphasis on priestess energy in the Hierophant card. Yes, it’s still a true Hierophant card, but I love how Cuccia-Watts has reinterpreted it with more feminine energy.

I love the simple elegance of the card backs, with that beautiful pastel blue and what’s reminiscent of a pearl. Technically these are not reversible card backs, but I mean, unless you’re looking, they’re more or less reversible.

25 Sept 2019 Edit: Oopsie! Pictured on The Fool card is Tracey Hoover, the author of the companion guidebook, not the artist. Hoover introduced the deck to U.S. Games when Cuccia-Watts was just 28 years old.

What’s interesting to me is how modern The Fool card feels in this deck, compared to the rest of the deck art. Thus, it almost conveys the narrative that this deck is about traveling back in time. At the point of The Fool, we are in the present day, and the nod to the deck itself in Key 0 is about the type of journey we’ll take with Ancestral Path. This is about ancestors and it is about past lives. At least that’s what I got out of this juxtaposition.

Some of these artistic interpretations of the Majors really made me think. Take, for instance, The Hanged One (Key 12), which is a baby turned upside down, meaning ready to be birthed. I really love the transition from the Star to the Moon to the Sun here. I’ve been using Ancestral Path for past life readings and find it to be quite clear for such purposes.

The Wheel of Fortune card in this deck is incredible. There’s some homage to medieval Cellarius star atlases. Here we see traditional astrology juxtaposed with modern astronomy. A master astrologer herself, Cuccia-Watts integrates much of her spiritual beliefs into this deck.

The Tower is a powerful card. Near the bottom you’ve got what looks like Stonehenge, then the Sphinx, then the Parthenon in Athens, Greece, and then a cathedral or basilica, and above that, what looks like a modern skyscraper.

The four suits depict four different cultures of antiquity. You’ve got feudal Japan in the Swords, and as we go through these photographs of the cards, you’ll see that the suit of Staves depicts the Nineteenth Dynasty of Ramses II in Egypt, the suit of Cups depicts Arthurian Britain, and the suit of Sacred Circles is indigenous First Nations Americas. Here in the suit of Swords, the progression of paintings tell an epic story about the Ainu, or indigenous people of Hokkaido.

The court cards are titled King, Queen, Prince (for the Knight), and Princess (for the Page). In Ancestral Path, court cards are deified ancestral figures. In the suit of Swords, for instance, you’ll find Izanagi and Izanami, Shinto kami, along with Tsukiyomi and Amaterasu, moon god and sun goddess respectively. In the suit of Staves (Wands), you’ll find Osiris and Isis for King and Queen, then Nephthys and Horus for the Prince and Princess (Knight and Page) cards.

The narrative illustrated across the Staves suit is that of the Osirian myth, the cycle of death and resurrection, with the deck creator taking cues here from the Egyptian Book of the Dead. Here, as noted in the little white book, the 7 of Staves is about solving the riddle of the sphinx. The 6 of Staves expresses the pitfalls of patriotism and hero worship

The 5 of Staves, which in the RWS shows the five individuals with staves fighting each other, and in the Thoth is titled Strife, here in Ancestral Path shows a much more serene and peaceful scene. Here, the 5 of Staves is about negotiation, cooperative efforts within a diverse group of people, and pooling talents to create something great. Many of the cards in this deck have been reworked, and so when reading with Ancestral Path, trust what you see depicted on the card more than you do memorized textbook card meanings.

The larger size of the deck is something you will either love or find cumbersome, and will be a matter of personal preference. I found it a bit cumbersome, but that’s just because I find any deck larger than 2.75″ x 4.75″ cumbersome. The muscle memory in my hands are so used to that standard tarot size that anything not conforming to that can feel awkward. 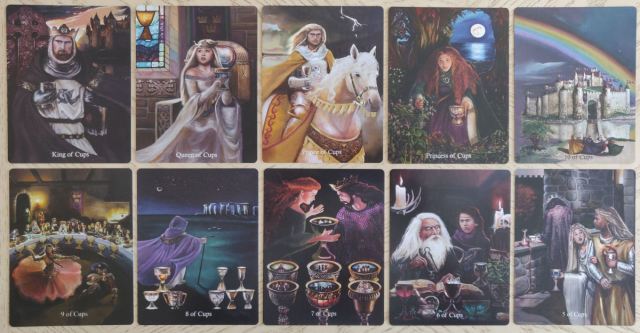 The coloring is magnificent. It goes without saying that Cuccia-Watts is an extraordinarily talented artist. You can see a clear foreground, middle ground, and background, and every image feels spacious. There’s actually an excruciating amount of detail in every card, but it never overpowers you because Cuccia-Watts understands balance. She knows how to paint a landscape that lets your eyes temper the detailing with the bigger picture, and it’s truly remarkable.

Here in the Cups courts, the King is Arthur and the Queen is Gwenhwyfar; Lancelot and Morgana are the Prince and Princess. The Cups tell the story of Morgana’s Reverie, as King Arthur’s sister prepares herself for the role of the psychopomp on the path of the King’s initiation into the knowledge of his genetic inheritance and his spiritual responsibilities.

I like the recasting of the tarot 7 of Cups here. In Ancestral Path, this card is about visions and intuition. It’s about reality being the illusion and having to trust that which lies behind the obvious. When the 7 of Cups shows up, it’s a moment to reflect on the meaning and purpose of your existence.

Cuccia-Watts and the author of the guidebook, Tracey Hoover, have brought out original expressions of the classic tarot architecture. In the 6 of Cups, while they stay true to textbook essential meanings, we also learn that this card can denote avoidance of negative childhood issues. 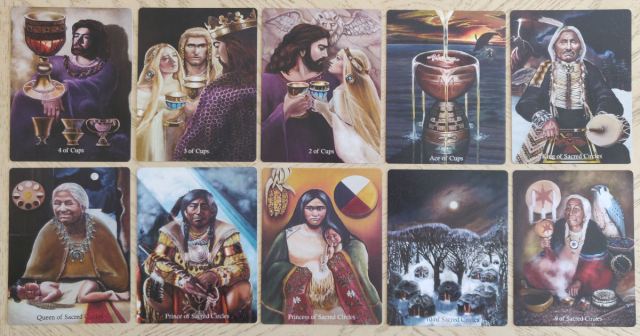 The suit of Pentacles (Coins/Disks) has been renamed to Sacred Circles. In the Sacred Circles, the King and Queen are Grandfather Thunder and Grandmother Moon, and for the Prince and Princess, Father Sun and Mother Earth. This suit tells a Menominee legend of bear and thunder spirit ancestors, narrating a vision quest.

The Aces in this deck symbolize raw mythical power. The Ace of Sacred Circles depicts a drum, which per Native American lore, measures the heartbeat of the earth and carries in its rhythms divine messages between the worlds of the living and the dead.

The little white book by Tracey Hoover is quite meaty. The tone and point of view for the card meanings is more spiritual in nature, however, and not quite as practical. When using Ancestral Path for readings of a spiritual nature, the little white book’s guidance will come in handy, though if you’re looking for more practical meanings, the tarot beginner will want an additional companion text.

Still, at 30 pages in length, it’s a great primer, and great at offering an orientation and introduction to the Ancestral Path tarot deck. I love how some of the keys have been interpreted here. For instance, the Nine of Swords can indicate a prophetic dream. The Queen of Swords expresses joy in the creative process. It’s about making something from nothing, and can also denote children, grandchildren, and family pride. The old school depiction of the Queen of Swords is usually a severe woman who is widowed and childless, so I really like this re-branding for her.

The Princess of Cups, depicting Morgana, can reveal a magical being, a healer, and someone knowledgeable in herbs and the mysteries of the earth. The guidebook ends with a classic nod to the Celtic Cross spread, which again, to me feels very 90s. I think every LWB from the 90s featured either the Celtic Cross or the Horseshoe.

The Ancestral Path Tarot by Julie Cuccia-Watts is a must-have in any deck collection, especially if you’re looking for iconic representations of where we were at as a tarot collective in the 90s. That it can be reprinted today in 2019 and feel wholly relevant is a testament to how remarkable this deck is.

I would recommend this as a beginner’s tarot deck. It reads with ease and the little white book is enough to get anyone started. The artwork captivates, opening up the beginner reader’s intuition in ways that will further deepen one’s curiosity for the tarot. And yet there is so much to unpack here, and from what I know of Cuccia-Watts’s astrological work, the symbolism on each card plunges far below the surface of what you see pictured. Thus, the advanced reader has much to work with here.