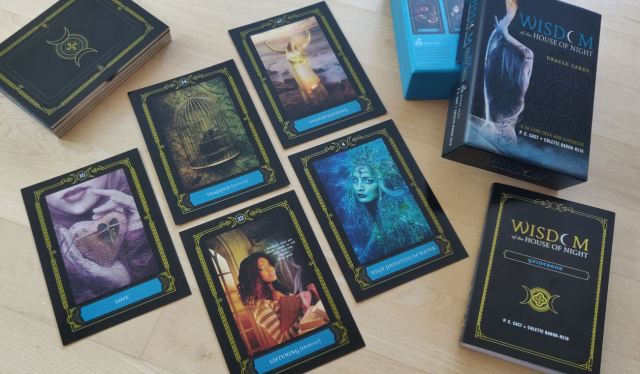 This is not a full deck review, just a look-see. Wisdom of the House of Night oracle cards were published back in 2012 and this deck has been in my collection for years and years, but I never picked it up to give it a go until now.

The deck is a collaboration between Colette Baron-Reid and the author of the House of Night series, P.C. Cast. I’ve never read the books and all I know about the series is what I can look up on Wikipedia. Basically, it’s YA fantasy involving vampires, but in the book’s universe, they’re called vampyres, with the y. 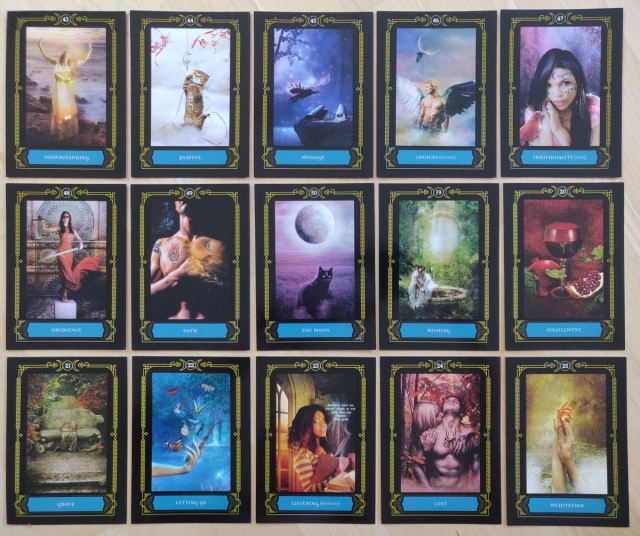 The artwork here is by the amazing New York based artist Jena DellaGrottaglia, who also did illustration work for the Mystical Shaman deck, Wisdom of the Hidden Realms, The Enchanted Map, The Good Tarot, Goddess Oracle, and Spirit Animal, among others. She takes Photoshop digital art to the next level.

What inspired me to share this look-see of the deck is its premise: to commune with Nyx. Use the 50-card deck to receive oracles from the goddess Nyx.

Historically, Nyx is the ancient Greek personification of the Night who resided in Hades, and who Zeus called the subduer of the gods and men, and in the Orphic Hymns, was said to have immaculately conceived and given birth to Hypnos, Moros (personification of doom), Dreams, Nemesis, and so on. [Dictionary of Greek and Roman Biography and Mythology (1849) by William Smith]

In the fictional world of House of Night, Nyx is, yes, the Goddess of the Night, but P.C. Cast describes Nyx as going by other names, too (and this gets interesting), such as Changing Woman (or Estsanatlehi of Navajo lore), Earth Mother, Gaea, Kuan Yin, and Sekhmet. Nyx is worshipped by the vampyres and honored through full moon rituals. That the Greek personification of the Night and the Buddhist bodhisattva Kuan Yin are one and the same is… cool!

One thing about the quality of this deck. None of the corners are rounded, so they’re sharp, and I mean very sharp, like will cut you sharp. Which I guess totally works with the vibes of the deck, vampyre-centric and all. But still. If you’re not careful, the deck will draw blood. True story. 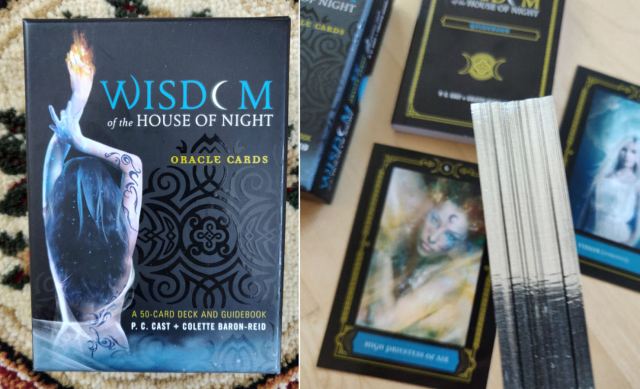 And yet I’m digging the decorative high-gloss accent on the matte finish deck box and the silver metallic edges. Great touches.

You can click on any of these photos for an enlarged view of the cards. The artwork fits in line with the branding of the YA novel series, so can’t complain much at all. It’s perfect for its function. I’m not personally a big fan of the pretty-goth aesthetic, not to be confused with goth style. I love goth style. It’s when it gets watered down into this saccharine sweet faux-goth that can kinda elicit the church giggles out of me. But I digress.

Also, I dig the triple moon motif on the card backs.

Wisdom of the House of Night is a lot of fun. There is a coquettish, high-femme character to the deck and reads fairly well. And the concept of it being a deck for receiving oracles from the goddess Nyx, who apparently is also Estsanatlehi, Gaea, Kuan Yin, and Sekhmet definitely intrigues me.

One thought on “Wisdom of the House of Night Oracle Cards”